We’ve been in Costa Rica for about a week, and one of the things we miss most about Mexico is the food. As someone we met yesterday put it, we’ve crossed the “culinary zone line” into the culinary creativity desert that comprises all of Central America. It’s not that the food here isn’t delicious in its own right (it is), or that we can’t get affordable good food (we can), but most meals consist of some combination of rice, beans, plantains, and eggs or a lightly spiced grilled meat. No tacos, no rich marinated meat, no strange flavors. Partly because we miss this, and partly because woo-I’m-totally-behind on blog posts, here’s a post I wrote up about tacos: 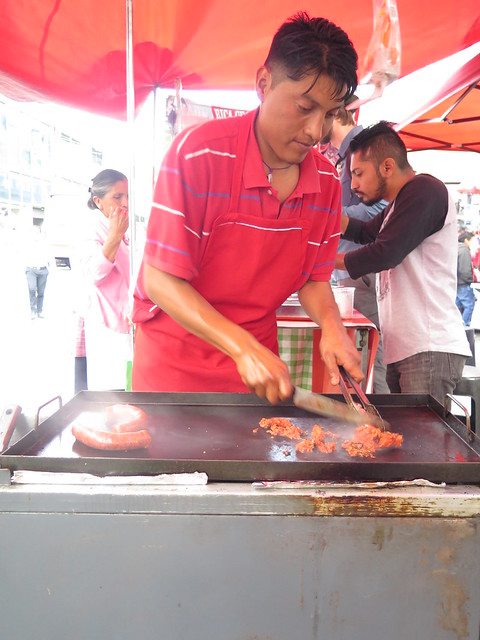 While we were in Mexico, the default meal was tacos. Almost everywhere, you could get tacos. Taco carts were our standard eateries, which mostly consisted of a hot grill, a small table with toppings (onions, salsa, and beans), and a couple of plastic chairs either around a table or just hanging out. To order, you talked to the guy at the grill (above), got your tacos and ate, then usually paid his assistant. There were lots of the standard tacos (carnitas, pollo asado, al pastor), but what we really liked were all of the new tacos that we’d never had in the states. If you’re getting tired of your usual taco, here are four taco fillings you can get instead:

(we forgot to take a picture, so just imagine it here)
The Suadero – If you Google this, no one can agree on exactly what suadero is, but from our experience it was a slow-cooked over low heat or “sweated” beef with a lot of fat and flavor. According to Wikipedia and a couple other online sources, suadero comes from a specific cut of the cow1,2, but given the variety in meats we got I’m inclined to think it might be a few different cuts of beef cooked in the same way. In a lot of places this was meat shaved directly off a roasting spit (think shawarma), but in the best place it was slow cooked at the edge of the griddle under some type of plastic sheeting. Best location we found: El Raton Taqueria in Pino Suárez, Mexico City; don’t be turned off by the name, the tacos here are amazing. To find it, take the metro to the Pino Suárez and head to the north edge of Jardin San Miguel. It’s right next to the bus stop and the Restaurante Lin China. 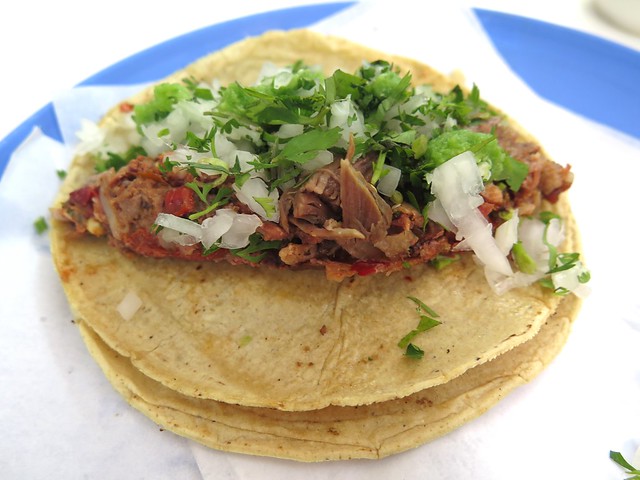 The Campechano – This is the meat lover’s taco. It combines two or more types of meat in a single taco, so you can eat all of the meaty goodness at once. Options often include thin cuts of beef, fried pork, or longaniza (sausage)3, but we saw variants that included sheep and other animals as well. This is also the only taco I saw regularly served with beans, maybe to add some fiber to that pile of meat. You can get Campechano tacos all over Mexico (the meat will vary), but our favorites were in Mexico City on Nezahualcóyotl, between 5 de Febrero and Avenida 20 de Noviembre. (Stoytcho’s note : my favorite was definitely the steak with sausage variant) 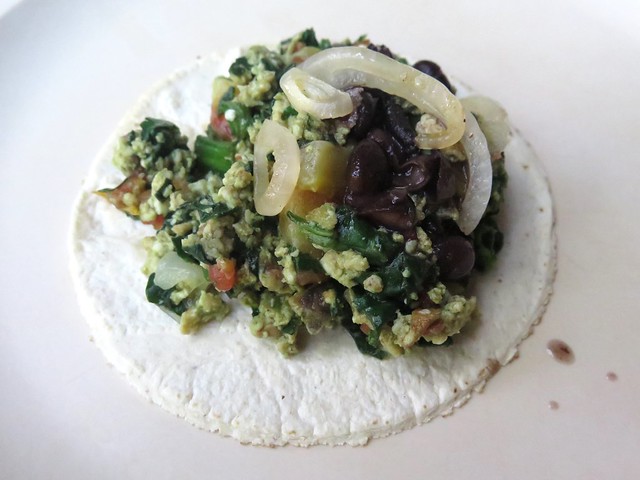 The Huevo con Chaya/Espinaca – These are the perfect breakfast taco, with a filling of fried eggs and the boiled greens of Chaya or spinach. Chaya is a little less bitter than spinach, although this may be due to a longer cooking time to destroy toxic hydrocyanic acid found in the raw leaves4. Either way, topped with pickled red onions and salsa, this is a great way to start the day. We found these tacos at Wayan’e, a taqueria chain in Mérida. Come early, as they’re only open for breakfast and lunch. 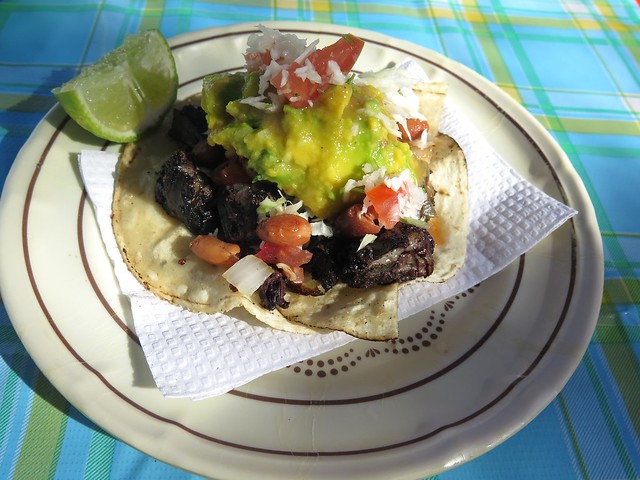 The ???? (potentially Buche) – I actually have no idea what this taco was, because when I ordered it Stoytcho was worshipping the loperamide god and I glanced over to another guy’s tacos and said “I’ll have what he’s having.” It was pretty good, slightly chewy with a great smoked and slightly gamey flavor. I’m pretty sure it was organ of some type, and after a long hunt on the internet I think it was Buche, or pork stomach5. There’s a recipe in the reference, but I got mine at a tiny taco cart in the central square in the town of Muna, along the Puuc Route.

There are, of course, many more taco fillings than these four. If you want to learn about more taco filling, I came across these useful tools in my research:
The tacopedia – a recipe book on taco fillings throughout the 31 states of Mexico
The semi-serious Serious Eats Guide to Taco Styles – Kenji’s guide to tacos and taco-like objects

2 thoughts on “Tacos we have known”