Some people have a passion for specific types of projects, like woodwork, or surfing, or cooking. Me? I apparently love challenging projects (see: getting a PhD, travelling around the world).

This manifests as evaluating projects thusly: is it really hard to do well? Is there a moderate or high chance of failure? Do I currently lack the skills and knowledge to do this project, and will I have to learn a ton to do it? Is it usually done with specialty equipment that we will have to McGuyver substitutes for? If the answers to the previous questions were yes, then HELL YEAH I’m in.

So, as I was stuffing my face with cacao fruit and lamenting the fact that the little beans within would go to waste, I hit upon the following realization: I could make chocolate.

Did I know how to make chocolate from cacao pods? Nope. But that didn’t stop me from scouring the jungle and Old Reef Farm for cacao pods to figure it out.

Note: A HUGE special thanks to Davide and Hakuna Matata Hostel for their patience with this insane project.

The first thing to cover is what part of the cacao pod actually makes chocolate. Let’s go from the outside to the innermost bit. First, you have your cacao pod, which grows from the stems on the cacao tree: 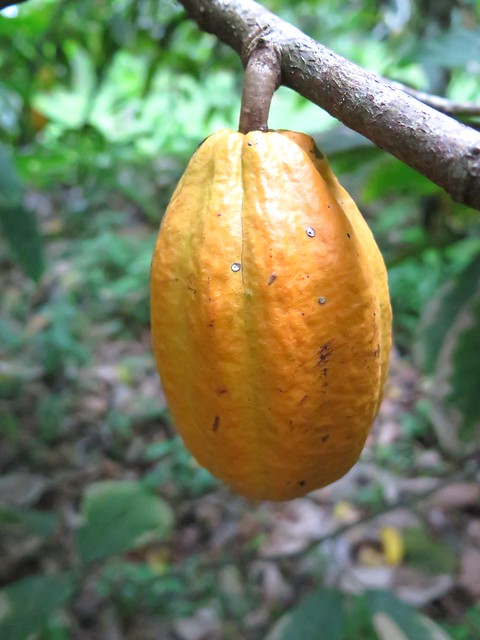 The pod is hard and inedible, but cracking it open reveals the seeds, surrounded by a fleshy, delicious fruit:

Inside each unit of fruit is a cacao seed, which is composed of a husk on the outside and the cacao bean or nib on the inside. This little nib is the source of all things chocolate. But biting into it raw just gets you a range of bitter and highly astringent flavors – definitely not yet chocolate.

We had to figure out type of cacao pods we had, since this determines some of the processing steps and the flavor of the final product. There are three traditionally-recognized “varieties” of cacao common in South America: Criollo, Forastero, and Trinitario. Modern genomics have actually revealed 10 clusters, but your standard chocolate-making information on the internet hasn’t quite caught up with this information yet so we’ll stick with the three.  The Criollo bean variety is prized for having complex fruity and spicy flavors, but Criollo trees are susceptible to a wide range of pests and diseases, making it fairly rare. The Forastero bean has a more traditional chocolate flavor, but because of the reduced complexity of flavors compared to Criollo, it’s considered inferior. However, Forastero trees are resistant to many types of pests and diseases, making them the most common type of cacao. Trinitario is a hybrid of the Criollo and Forastero varieties, resulting in trees with greater resistance to pests and beans with a more complex flavor.

There are several traits that distinguish these three varieties, but since we only had the cacao pods, we had to stick with the pod and cacao bean traits. Our cacao pods were somewhat bumpy, and the beans inside were moderate to dark purple and black. Criollo pods are extremely bumpy and have white or light pink cacao beans, so they were immediately ruled out. Forastero pods are smoother and have dark beans; combined with their abundance, it’s likely we had Forastero pods. The one exception is the orange pod on the far right, which had moderately purple beans and rougher skin, suggesting it may be a Trinitario. Luckily, it seems like Forastero and Trinitario can be processed together (Criollo is more finicky).

From Bean to Chocolate:

Internet research yielded five major steps in making cocoa powder: fermenting, drying, roasting, shelling, and grinding. In total, “proper” cacao processing should take at least a week. While we had more time in Cahuita than we expected thanks to Hurricane Otto and Costa Rica declaring a state of emergency, we still had only 5 days. So, we had to fudge a few steps, no pun intended. I’ll break each step down below and explain how it’s normally done, then how we did it.

I didn’t even know chocolate making had a fermentation step before this project, and it threw a definite wrench into our plans. Once removed from the pod, the fruit-covered cacao seeds are traditionally fermented in buckets or boxes for at least 3 days and up to 2 weeks. This process is an actual fermentation process, where the fruit around the cacao seed is consumed by a complex microbial community of yeasts and bacteria that produce lactic acid, alcohols, and aromatics. The result of this fermentation is two-fold: it kills the cacao germ with heat and prevents it from germinating (which produces astringent flavors), and it initiates the flavor development process in the bean. This presented two problems for us: we didn’t have that much time for fermentation, and we’d already eaten the cacao fruit off half of our seeds. Oops. I couldn’t find much information on whether these things would affect the fermentation process, but dangit, I’m a biologist. I know the three things needed for fermentation: sugars, low oxygen levels, and warm temperatures. Half of the cacao seeds still had fruit, so I figured this should be enough to drive the fermentation process. As for the low oxygen levels, the most airtight thing we could find was a plastic doggie bag (a la making prison wine I read about once), so we dumped our cacao seeds into that:

As for the warm temperatures, your standard bread-and-beer yeast Saccharomyces cerevisiae favors temperatures of roughly 30° C, or slightly below body temperature (thanks to my yeast labmate Eddie for this info). So after tying our double-bagged cacao mass shut, we slept with it under our sleeping bags for two nights and left it wrapped in the sleeping bag during the day. Since these temperature conditions would speed microbial growth, I figured we could cut fermentation down to around 36 hours. And considering that the bag started to bulging with liquor-scented carbon dioxide that we had to open and release every few hours, I think I was right.

Step 2: Drying
The second cacao-making step I didn’t know existed, in this step cacao beans are dried either in the sun or with low external heat to make them both easy to ship and to further develop flavor. I considered skipping this step entirely, but since the roasting step could go horrendously without it, I decided against it. Since we only had 1-2 lbs of beans, we opted for sun-drying on plates borrowed from Hakuna Matata’s kitchen:

By some kind stroke of fate, the days following the hurricane were hot and sunny, so we spent 2 days at the hostel drying our cacao beans, which consisted of placing them out in the sun, turning them once every few hours with a fork, and then moving them when the sun shifted. The little fermented beans definitely attracted some bugs, as well as some curious looks from hostel staff and guests. Finally, on the evening of the second day, our beans were dry enough for roasting.

From here, cacao processing gets fairly fast (can be done in a few hours) and the internet can provide lots of instruction, as most people start chocolate-making from scratch with fermented, dried beans. Like coffee, cacao beans are roasted to mellow acidic flavors and develop complex aromas through the Maillard Reaction. The practical goal of cacao roasting is to roast enough so that these flavors develop, but not so long that the cacao burns. There are some fantastic online resources on roasting cacao beans in an oven, but we didn’t have an oven at the hostel. So we opted for this guy’s awesome pan roasting method.

The primary goal was to start hot and then lower the temperatures for a roast of at least 30 minutes, pulling the beans off when they smelled chocolatey but before they were “done” since they would continue cooking. Also, since we had Forastero and Trinidado beans, we could opt for a longer roast time. So, we heated our pan and tossed the beans in, stirring constantly. Once the beans had heated (about 5 minutes), we lowered the heat. We then kept stirring and tried a bean every 5 minutes to see if they were done, which is marked by a loss of astringent flavors and conversion of bean color from purple to chocolate brown. Finally, 45 minutes later, we pulled the beans off and poured them into a metal bowl. Since they tasted done, I wanted to cool them quickly, so I went over to the hostel’s pool and used it as a water cooler to rapidly cool the beans.

Step 4: Shelling
This was probably the easiest step in the process, as it involved cracking the seeds, dropping the bean into one pile, and then dropping the husk into another pile. We did this manually, and kept the husks to make a fairly tasty tea. Here’s what the beans looked like: 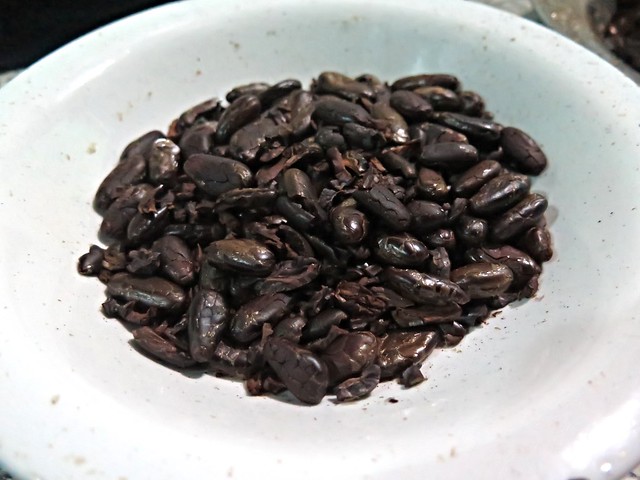 And here are the husks: 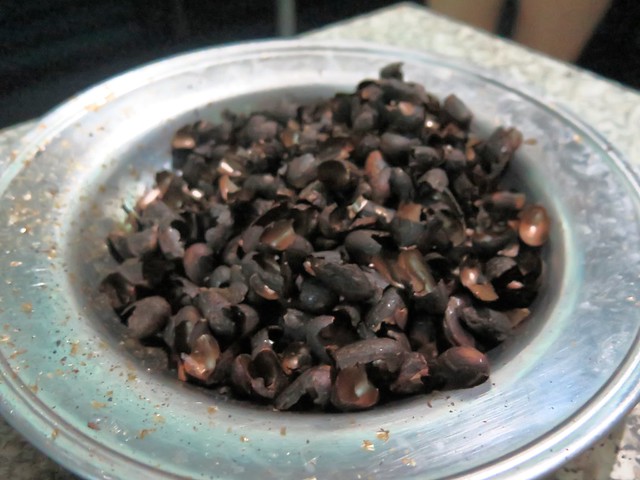 Step 5: Grinding
Grinding is the final challenge in making cocoa, which is arguably fairly easy to overcome with a spice or coffee grinder. But we were in Cauhita, which doesn’t have an electrical appliance store (or really, most stores), so we opted for a manual grind. We found and washed a nice elongated rock, and ground the beans in a metal bowl as finely as we could.

Arguably, our cocoa powder wasn’t super-fine, but upon tasting it actually tasted like chocolate. Not like the nasty raw cocoa beans, and not sort of like chocolate, but ACTUALLY chocolate. We had transformed raw cacao beans into actual cocoa powder. We’re wizards.

We actually haven’t finished making our chocolate yet. We poured the cocoa powder into a bag and have been dragging it along with us, hoping to find a cheap coffee grinder here in Colombia. I’ll post an update when we do.