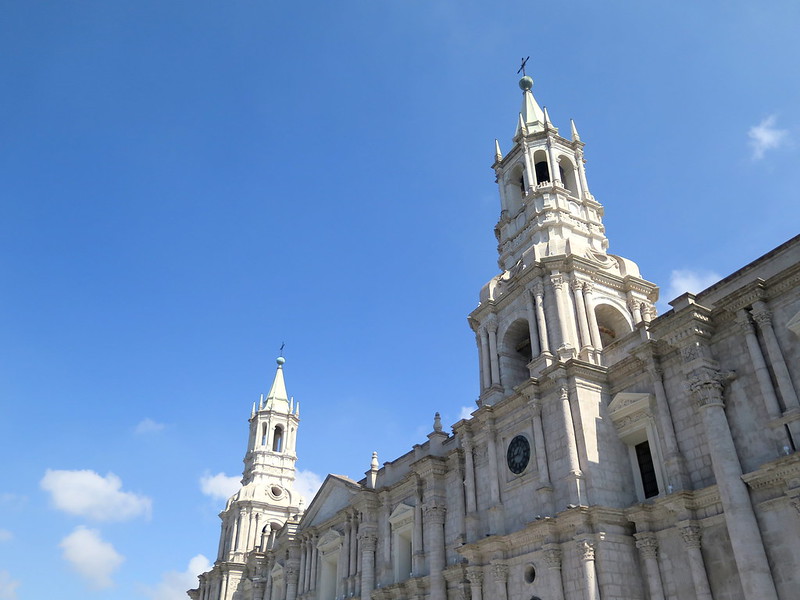 After the long Salkantay Trek and a few days of recuperation in Cusco, we bussed on to Arequipa in the south of Peru.

Since we were in town for only about 48 hours, we opted not to spend tons of time travelling to Arequpia’s most famous destinations, like Toro Muerto’s petroglyphs (2 hours away by car) or the splendor of Colca Canyon (5 hours away by car). Instead, we walked around the tour and ate ourselves silly. Arequipa, after all, is also famous for food. So here’s a meal-by-meal narrative for you to enjoy:

Arrival – 6:30 am – the avocado-egg ciabatta sandwich

Augh, it’s so late. Or is it early? It’s early. We’ve arrived. 10 hours in a Cruz del Sur bus from Cusco to Arequipa is unkind, at least to short folk. Stoytcho reports sleeping some, but Natalie slept not an hour, as she couldn’t reach the floor and kept sliding out of her seat. We collect our baggage and grab a collectivo to Arequipa’s Plaza del Armas where we snag a hostel for only 50 soles—and we can check in immediately. After dropping off our stuff, we head out and encounter our first gem: fried egg sandwiches sold from small tables. There’s avocado underneath, and combined they make a killer combo for only 2.50 soles (USD $0.75) a sandwich. 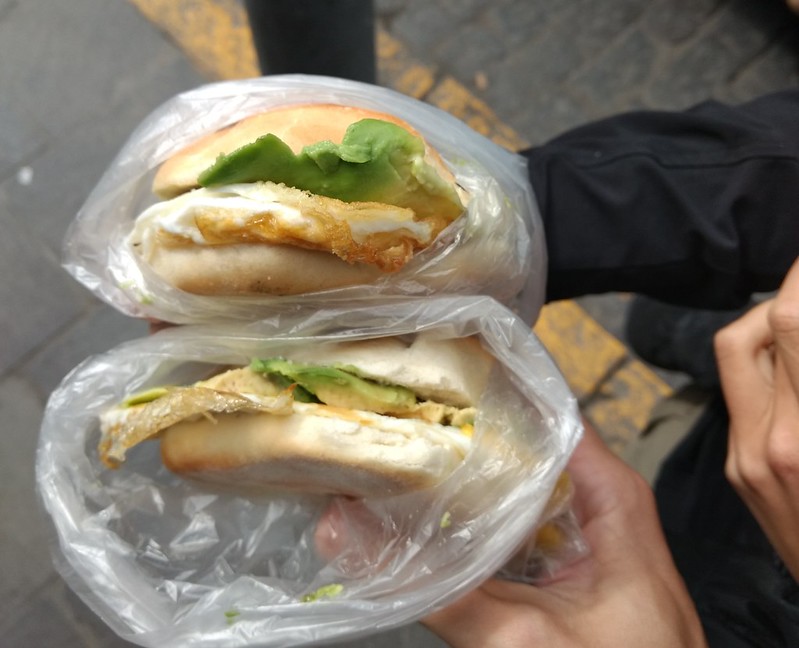 Sleep-deprived, we stagger around the Plaza del Armas and then wander down Mercaderes, not looking for anything in particular. The delicious smell of steamed masa draws us to small restaurant, and for 4 soles we get two fresh tamale. “Salada?” the shopkeeper asks politely. “Uh…sure?” we reply. She heaps on what looks like a salad of sliced red onion, tomatoes, cilantro, and what look like bits of meat. Some kind of ceviche? Away from the shop, we sample cautiously: 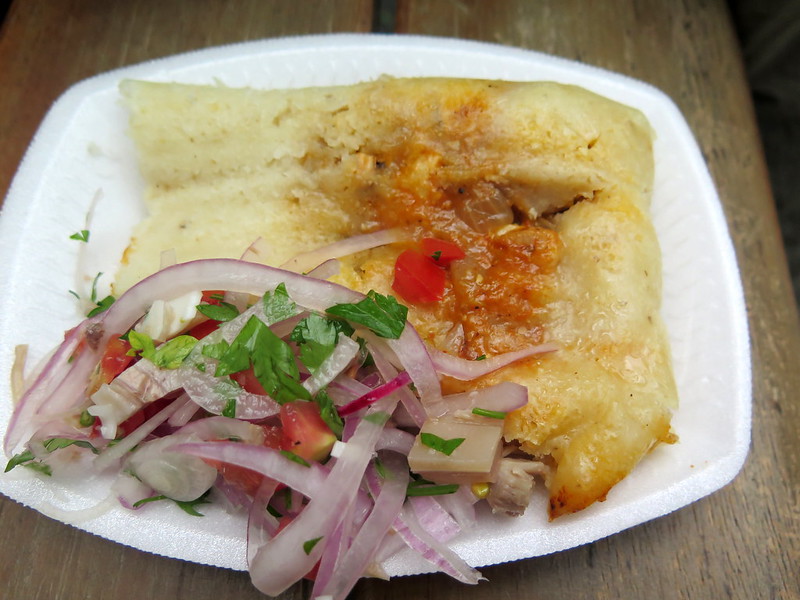 Natalie: What is this?

Natalie: It’s not bad. But there’s a lot of sinew and ligaments. I think that’s part of a bone. I… don’t think this is fish ceviche.

Stoytcho: Yeah, I think I’m done with it. I’ll eat the onions.

Natalie: …wait, is this chicken?

We ate what we could and then stumbled back to the hostel for sleep.

A few hours of sleep does wonders, and we wake up much more aware of the city. Given that Arequipa is famous for its picanterias, Stoytcho uses the internet to track one down: La Capitana. It’s located on Los Arces street in Cayma, several minutes’ walk from the Plaza area. We get lost along the way, overshooting it by several streets, and have to backtrack. Finally, on our second sweep of the street we find the sign “La Capitana” hanging over an arch and an old man acting as attendant waves us in. The interior is casual, with strangers sitting together on long picnic tables to enjoy lunch. 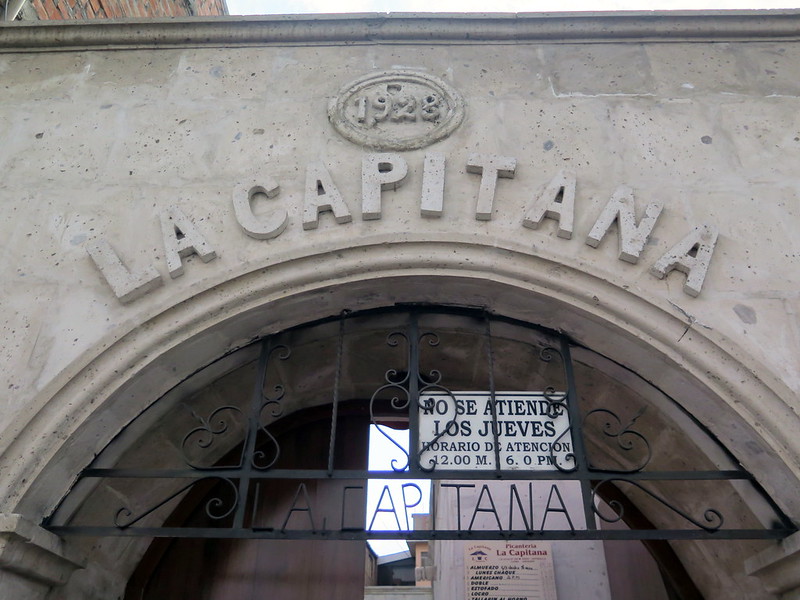 We sit down at a table and stare blankly at the menu. Yep, we don’t recognize anything except the word “gaseosa” (soda). Oh, also there’s a dish called “Americano”, and Natalie remembers reading somewhere that this is a mixed plate that lets you sample a variety of dishes. We try to order it when the waitress comes by. “No”, she insists, “you want the Double. I’ll bring it to you.” Stoytcho asks the difference and finds out that it’s the same type of sampler, but with enough food for two. “Sure, okay,” we agree. 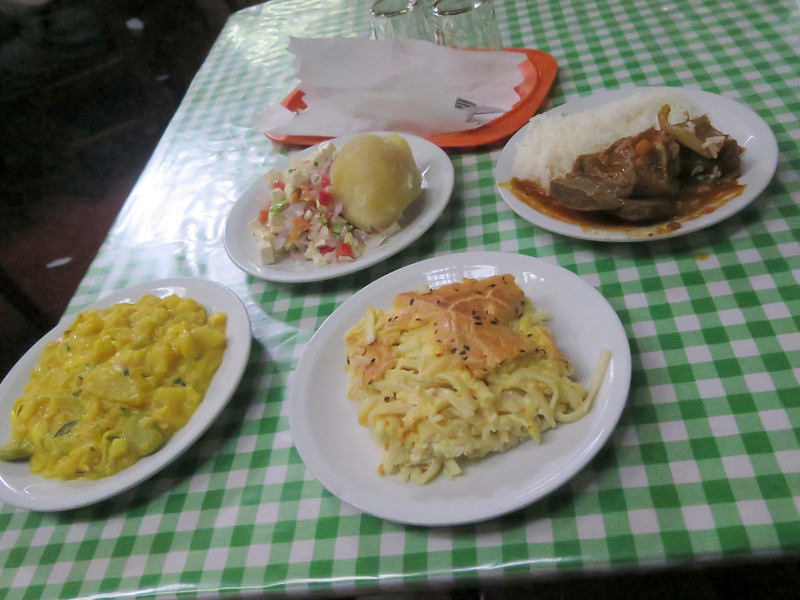 The food arrives on four plates, accompanied by a glass of chicha—a local specialty made from fermented corn juice. Some folks online claimed it tasted like bitter beer, so Natalie is wary. We sample some: 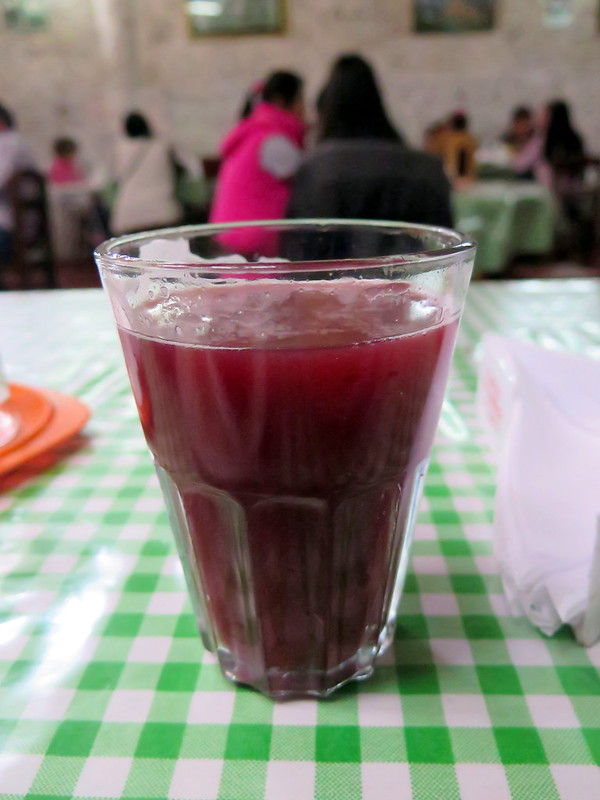 The rest of the food is equally amazing. Pastel de tallarin al horno, the casserole of noodles and cheese covered with eggs that apparently tastes just like Stoytcho’s favorite breakfast food in Bulgaria (yufka). Ají de Calabaza, the yellow stew that’s tastes of vaguely cheesy squash. Saltero de queso, which acts almost as a delicious vegetarian ceviche. And estofado de res, an amazingly savory chunk of stewed meat served over rice. We of course didn’t know any of this until we politely asked the person eating next to us what we were eating.

Although we waddled out of La Capitana totally full, half an hour’s rest in the nearby Parque Senor de la Cana solved that. We watched young lovers relax and pigeons be dicks and eat flowers. Then we decided the next logical step after all that good food was to keep eating good food. So we used Google Maps to locate all the nearest panaderias and plotted a course up Trinidad Moran and then east on Avenido Ejercito, taking us back to the Plaza Del Armas area while hitting a couple of different bakeries. 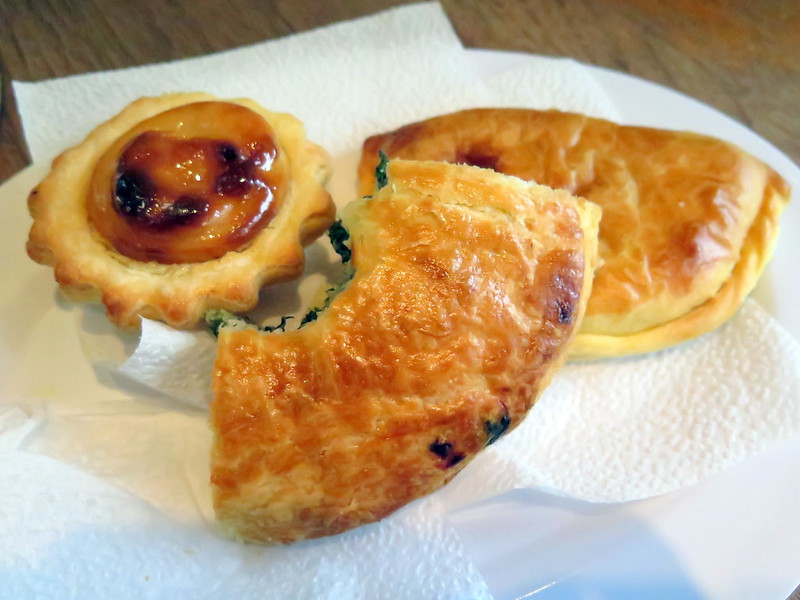 We visited four different bakeries and sampled dessert or bread at each. La Miel had an amazing variant on chicha made from fermented maracuya (passionfruit juice), while Astoria Bakery had a lovely variant on crème brulee with the lightness of a flan. And Croissant had croissants and mini French loafs that smelled divine. 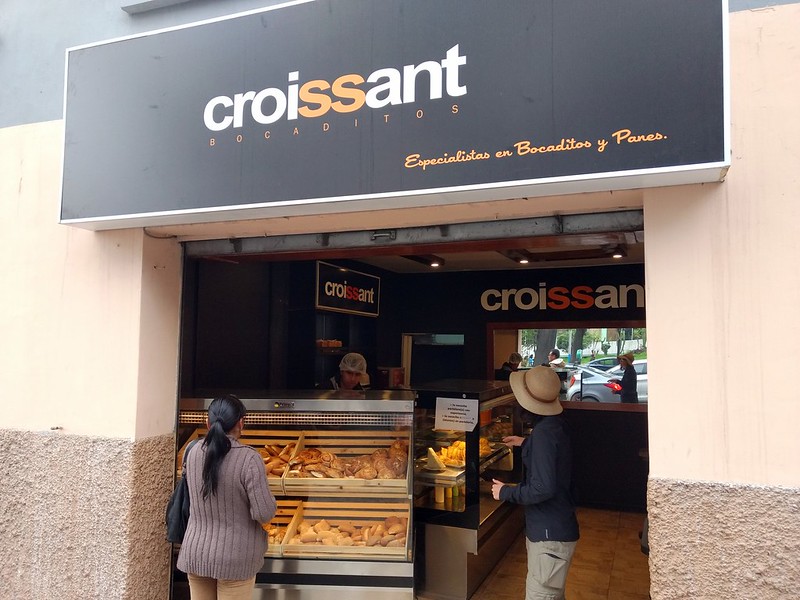 Sweet tooth sated, we found ourselves back in the Plaza area and head toward Parque Selva Alegre, mostly because of the name. Seriously, who wouldn’t want to go to Park Happy Jungle? We get there only to find it’s only open on the weekends! This is apparently a thing in Arequipe, as the general public (obviously) doesn’t go to parks during the week due to work. We are a bit saddened, but on our way back we run into a man selling mate tea from a cart: 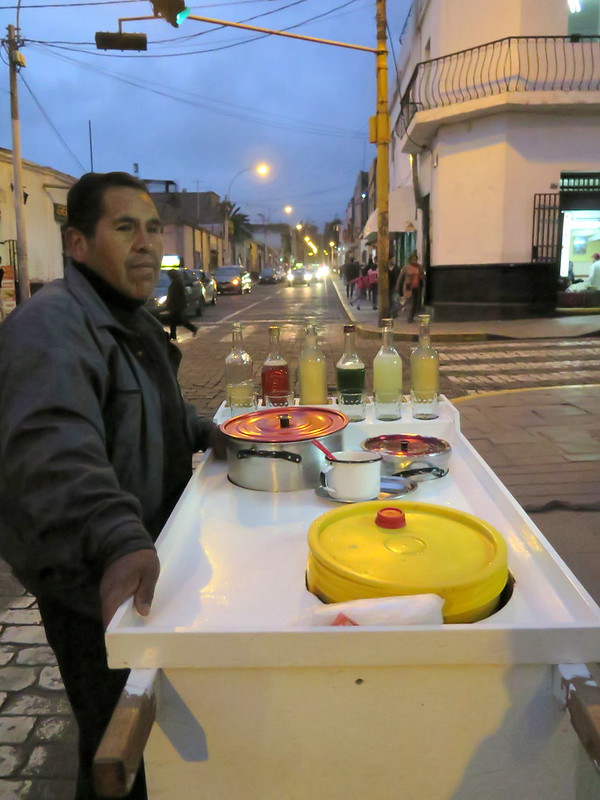 He makes us a glass of the hot herbal concoction mixed with lemon juice and linseed jelly for 1 sol. In the chilling early evening it is lovely, and we stand there sharing the glass for a few minutes. 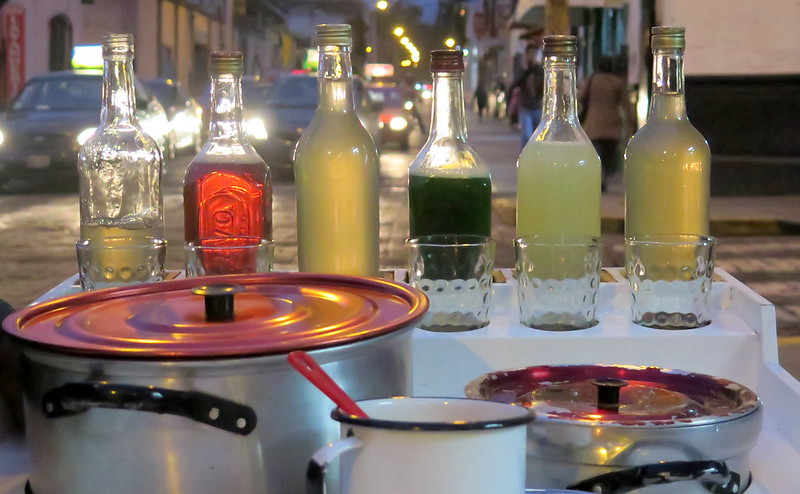 Then Natalie gets out the empty water 1 liter bottle. “How much to fill this?” Turns out it’s 3 soles (less than $1 USD). We leave with a liter of the godly stuff, and head back to the hostel for a rest.

After all the amazing food, we are a bit at a loss of what to do for dinner. We look up popular restaurants in Arequipa and after weeding out the overly-fancy expensive ones, we settle on Hatunpa. Hatunpa is a themed restaurant, but instead of being themed around a cuisine it’s themed around Peru’s gift to the world: potatoes. All the different kinds of potatoes you can imagine. When we arrive, our host asks us our nationalities and gets us little flags for our table—he even has one for Bulgaria (Stoytcho is overjoyed). 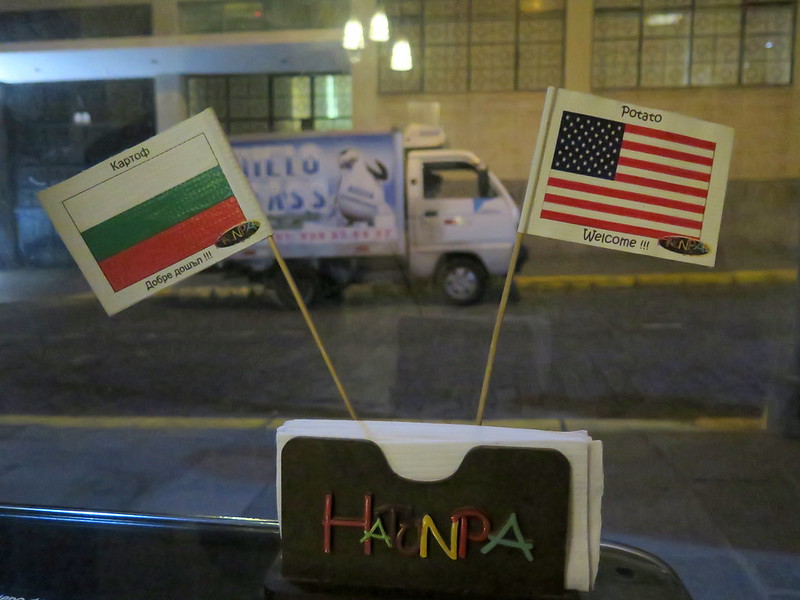 We order the seco de pollo and ají de gallina, each with seven different kinds of potatoes. Camote, a sweet potato with a bright yellow-orange flesh, is Natalie’s favorite. Then there are the waxier white potatoes, the buttery gold potatoes, and the purple potatoes that have an earthier flavor. We round the whole meal out with another glass of chicha and a glass of something new, Ponche de Guindas. It’s a rich cherry-flavored beverage made with little native Peruvian cherries, sugar, cinnamon, and cloves, and it tastes like paradise—the perfect way to round out a meal. 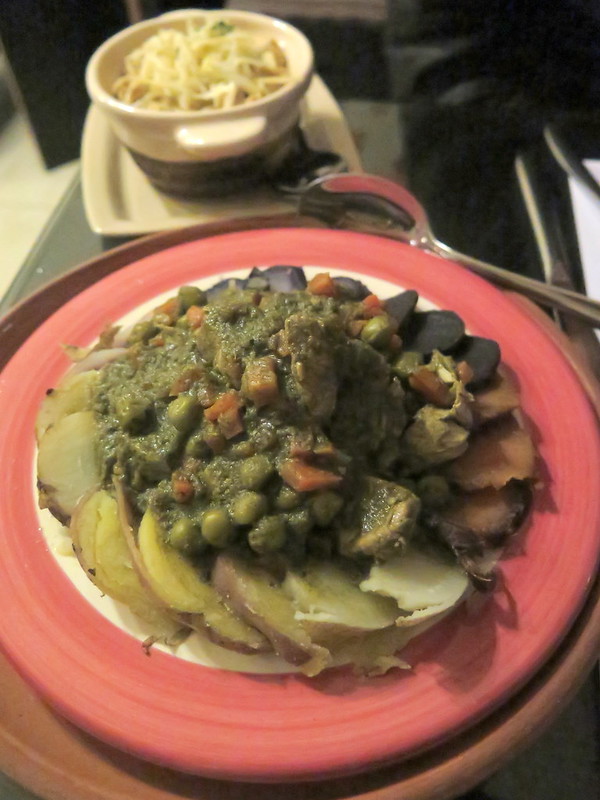 After dinner, it’s back to the hostel for a night of full sleep. Equally precious, sweet sleep.

Dreaming of dining like us? Here are some links to recipes so you can fabricate your own feast: