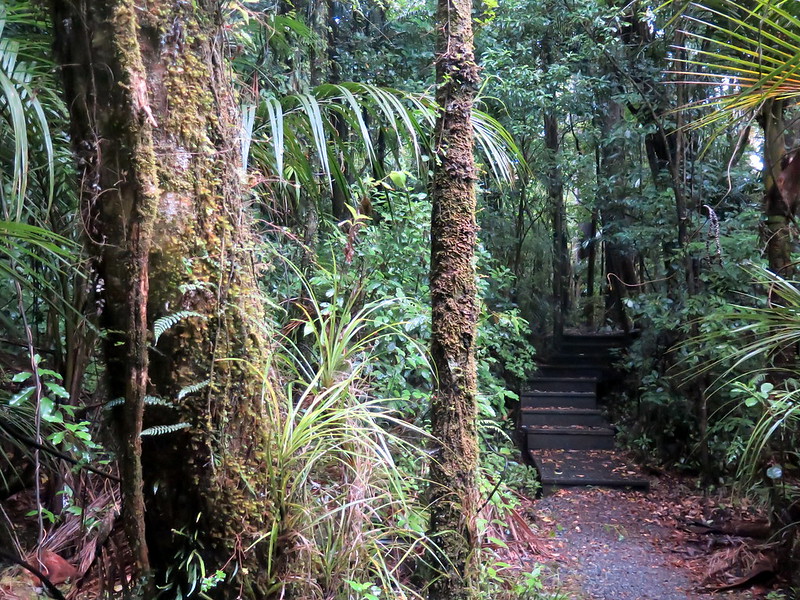 Take a turn off the main road and keep going. Eventually you hit gravel, and even farther, dirt. At the end of a dirt road is where many of the North Island’s treasures are hidden. Without too many tourists or locals, they’re great places to see the nature of New Zealand and explore in peace and quiet. Like the fantastic Waipu Caves, the Puketi forest sits at the end of a dirt road, and while it’s listed in some of the travel guides, we found it to be entirely quiet even at the peak of tourist season. Unlike the rest of the North Island, the northern peninsula seems to have less sightseers, few enough that many great attractions are rarely visited. 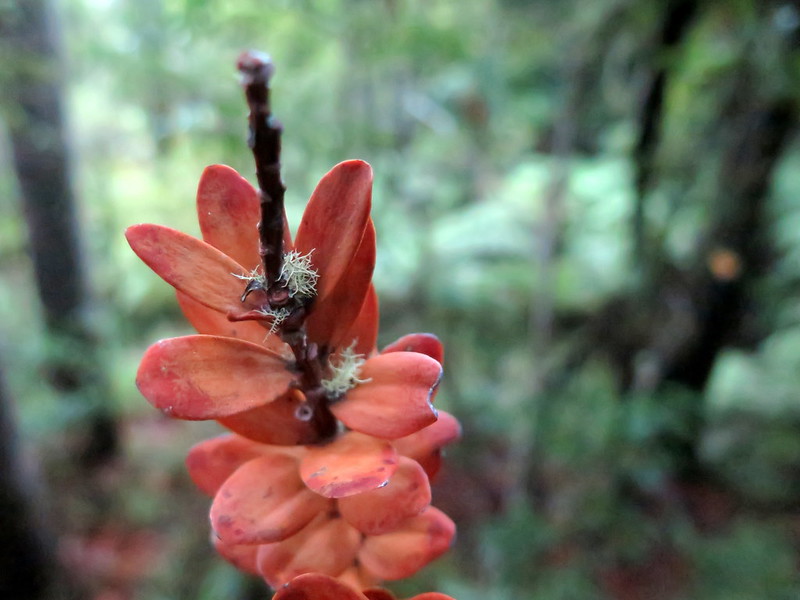 The Puketi forest is one of several Kauri tree forests left in New Zealand. Shorter than Redwoods but much thicker, Kauri trees are a symbol of pride on the island, considered the kings of the forest by the Maori. In person they are striking, their trunk overwhelming, their branches blooming into a canopy of what would be normal sized trees some thirty meters in the sky. 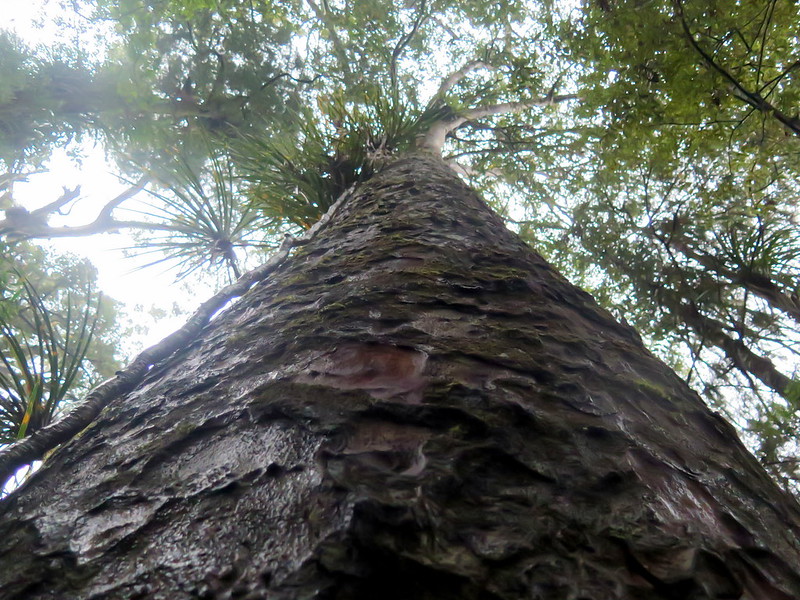 The Puketi forest is not the best place in the Northland to see the largest of these trees, but it is the best we found for seeing them in their natural environment. While the Parks department does a great job of framing their particularly treasured trees, in Puketi you see them mostly unimpeded by railings, and without the crowd that the greats attract. Another surprising nicety at Puketi – the trail has signs naming the various flora 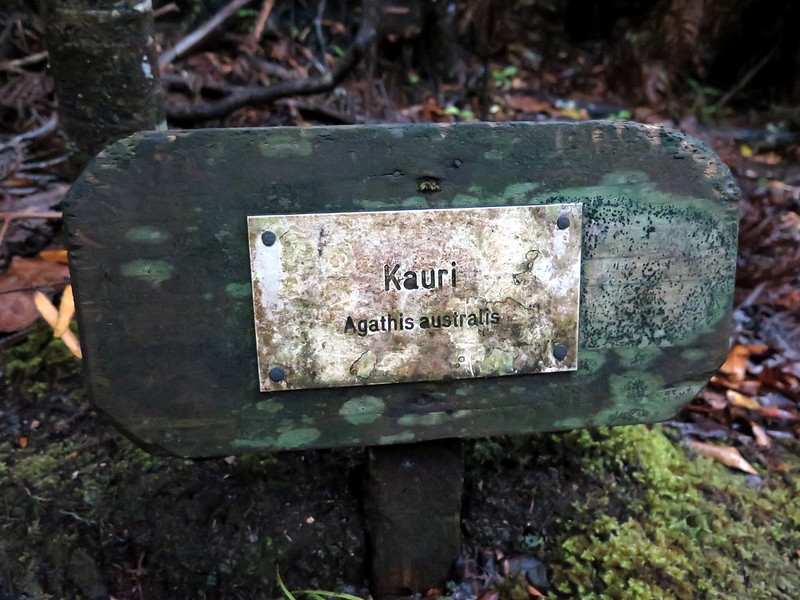 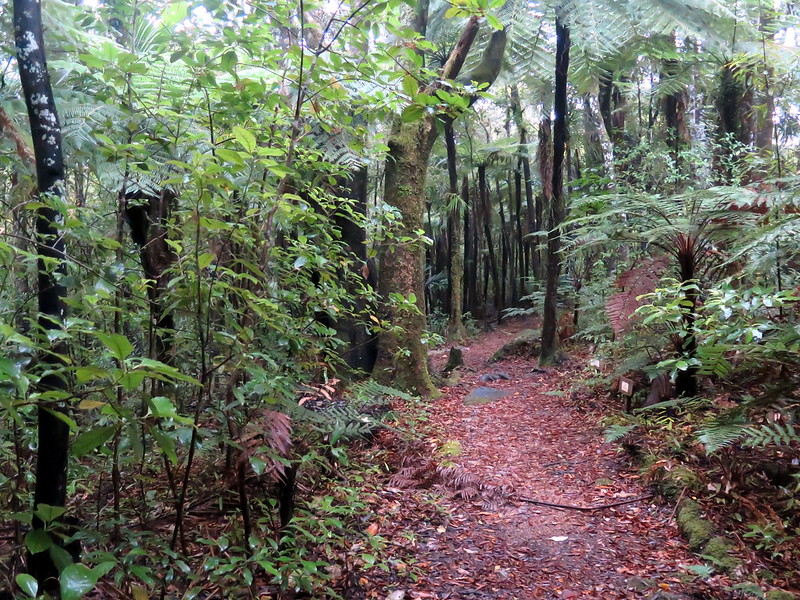 The nature walk also does its best to educate the public of the problems that faced the Kauri trees. Besides being highly desired for their famously straight and durable lumber, the trees produce a wound-covering rubber. Initially rubber harvesters took it from fossilized deposits in the northland, but turned to bleeding live trees when the old supplies ran down. The cuts and gouges left the trees open to disease and as a result many died. 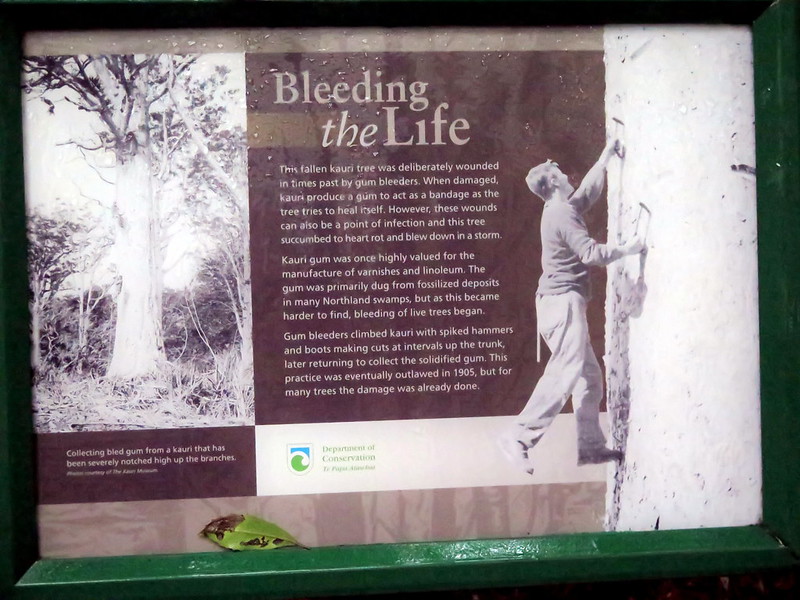 The modern-day villain for these trees is Kauri dieback disease. Spread by mammals, particularly humans and wild boar, the disease causes a laundry list of symptoms leading inevitably to tree death. There is no known cure, and the trees don’t show any natural resistance. Once a single tree has been infected it’s only a matter of time before any nearby trees succumb. The spores can live for a long time without being in a Kauri and it takes only a microscopic amount to spread the disease to a new area. To protect the trees New Zealand authorities have made sure to set up elevated walkways at all popular Kauri sites, introduced public awareness campaigns for cleaning gear, and have even closed sites when the threat of infection became too great. 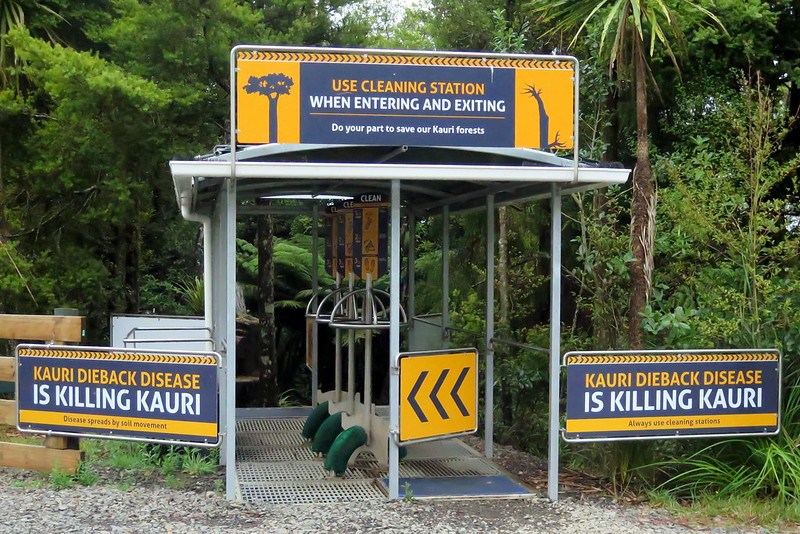 The nature walks at Puketi are a great way to learn about the flora of New Zealand, to appreciate the history of, and threats to, the greatest of the islands trees. Their future is uncertain, an unfortunate reality for these proud giants. Despite this shadow, the forest is peaceful and full of life. It is vitally green, full of the sounds and smells of nature, with beauty great and small on all sides.