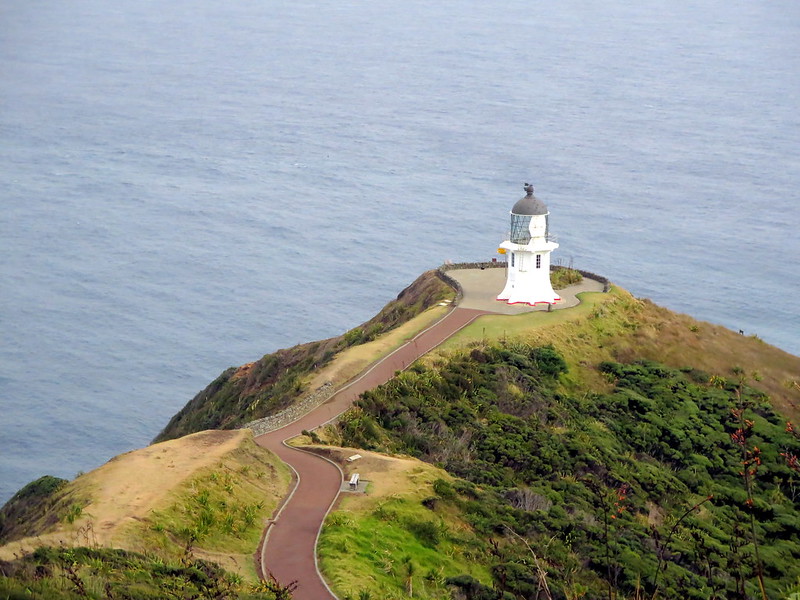 At the not quite northernmost point of New Zealand is Cape Reinga, a peninsula on a peninsula, bordered by crashing waves and fantastic cliffs. We arrived early in the morning, not quite early enough for sunrise, but early enough to be one of only four or so people there. At Reinga there is only a little bit of hill climbing to be done, mostly to see a wider view and to get back to the parking lot. The rest can be accomplished at a slow, meditative walk from the entrance out to the lighthouse. 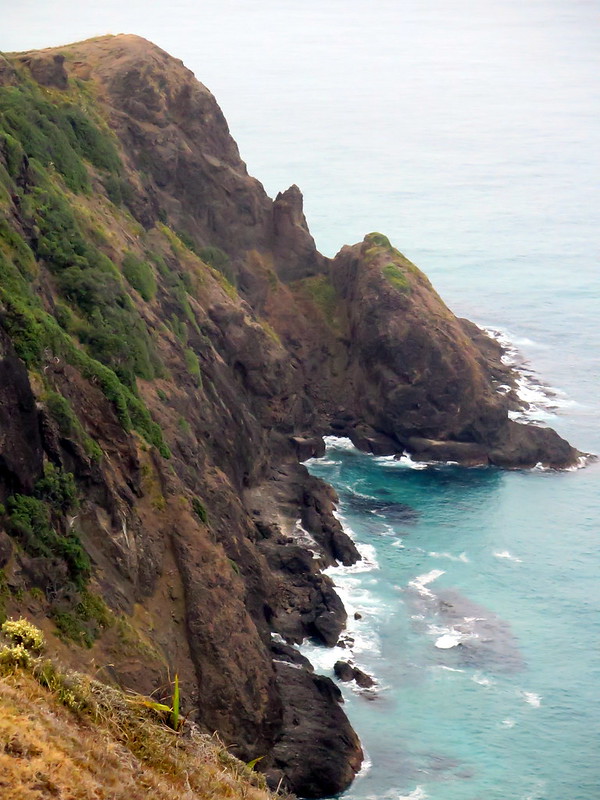 The cape is a holy site for the Maori, who believe it to be where the spirits of the dead fly off the island and continue on to the underworld. New Zealand may have issues with cultural relations, but at least from our visitor’s perspective, the government seems to have done a lot right with the monument at the cape. The original gate and toilets were too close to the cape and local Maori complained. The NZ government moved the gate further out and extended the walkway to what is there today. The signs along the route are as educational as they are plentiful. Each one tells a Maori story or describes the local flora and fauna. The signs are made out of wood and rusted metal, designed to be unobtrusive to the area. 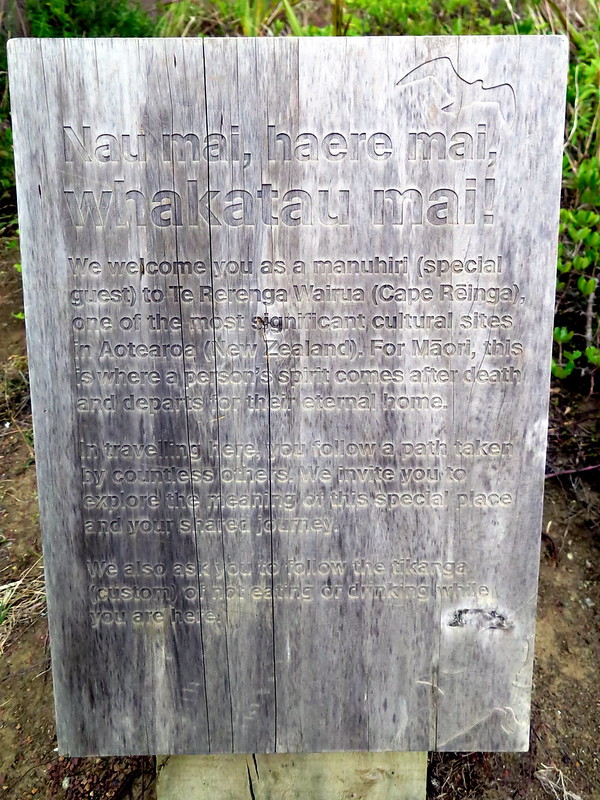 Even the entrance plays a deep and sorrowful wind-ensemble style piece when you walk through it. Initially my impression was that it was slightly corny, but it fits the place and sets the walk to the water off on the right note. For us it changed the experience from simple sightseeing to conscious appreciation of a different culture, and we hope it does the same for others. 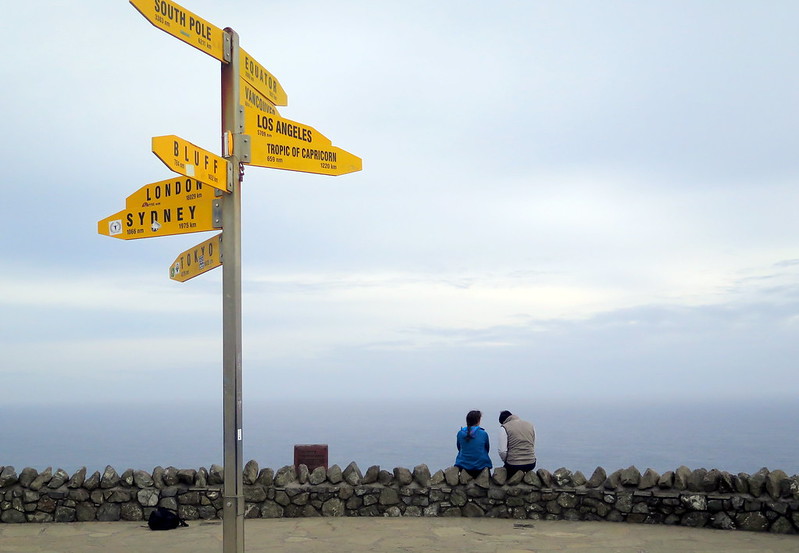 When you reach the lighthouse at the literal end of the road, you can see, far off in the distance, a small outcropping with a gnarled tree growing out the side. This is an eight hundred year old pohutukawa tree which, in Maori folklore, the spirits of the dead grab in order to leap into the ocean and continue their journey. 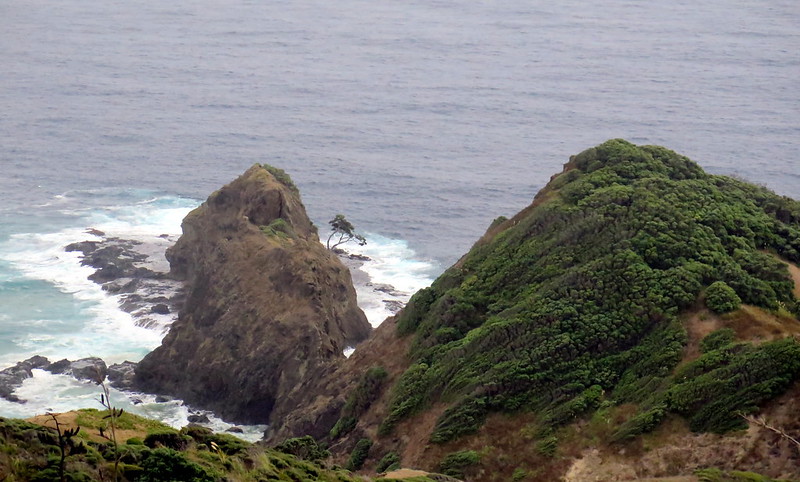 It’s quite a sight to see it growing out there, entirely alone and seemingly unsupported. With the surrounding crystal-blue waves it’s an experience of beauty and contrast, the seemingly eternal cliffs battered by the turbulent waves. On a clear day they say you can see even as far out as a set of small islands off the coast. We saw only hints of their shadows through the fog, and that we may have imagined. 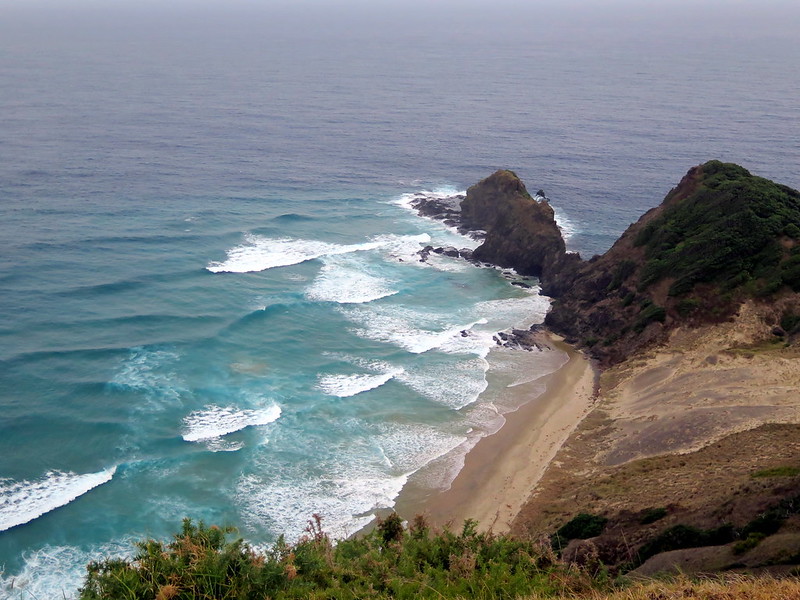 Taking the road back to the main Northland is a continuation in the beauty of nature. Here stand windswept trees to greet you, on hills overlooking rolling green hills stretching out to forever. One the western side of the road, past the grass lies the ocean, on our foggy day a dull gray in contrast to the turquoise to the north. The road is long and mostly lonely, but well worth the drive out and back.