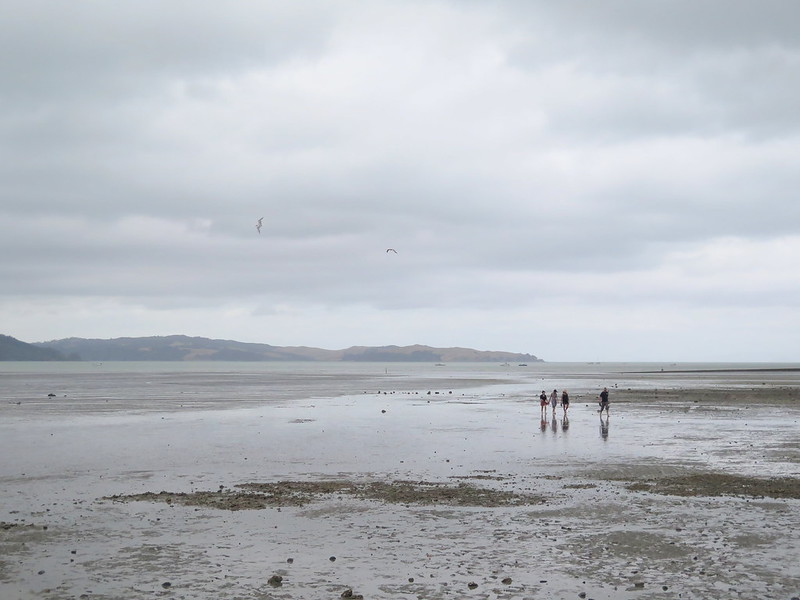 On the road out of Auckland, headed to the eastern shores of the North Island, we encountered a very long and flat beach. We mostly stopped there because our app said there was a bathroom there. There was one, and there were also groups of people walking around with buckets on the beach. This is always of interest to us – people with buckets means something worth collecting is nearby. 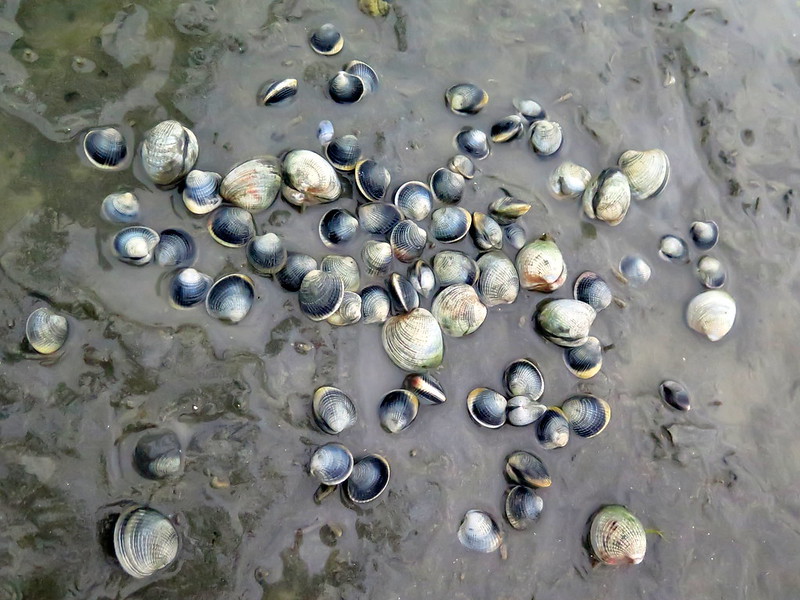 We asked a local with a full bucket and quickly found out the thing worth collecting was cockles. There’s a sign on the road that says you should only take fifty cockles per person, far more than a feast calls for. Our friend told us they and many other families gathered up bucketfuls for their gatherings. We’re not much into mollusks but we have a hard time passing up foraged food. There’s a satisfaction in cooking and eating something you found and gathered yourself, though for us it’s normally mushrooms and berries. 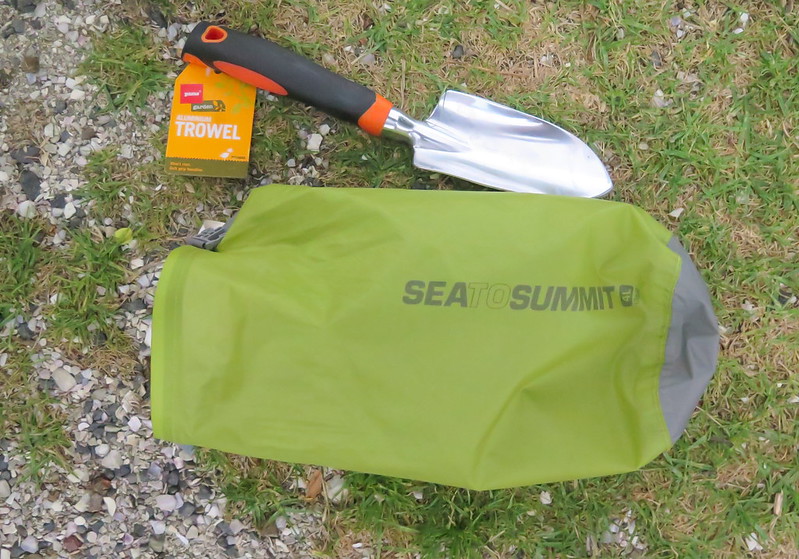 We headed right down to the waterline, pokey spiral shells under our feet. When we got there, we realized we had no way to hold the cockles we found. Back to the car, then back to the waterline, this time with supplies in hand. A trowel to help with digging and a waterproof bag to hold the cockles. It turns out, as expected, that the waterproof bag holds water in almost equally as well as it keeps it out. It also, thankfully, doesn’t retain smells. 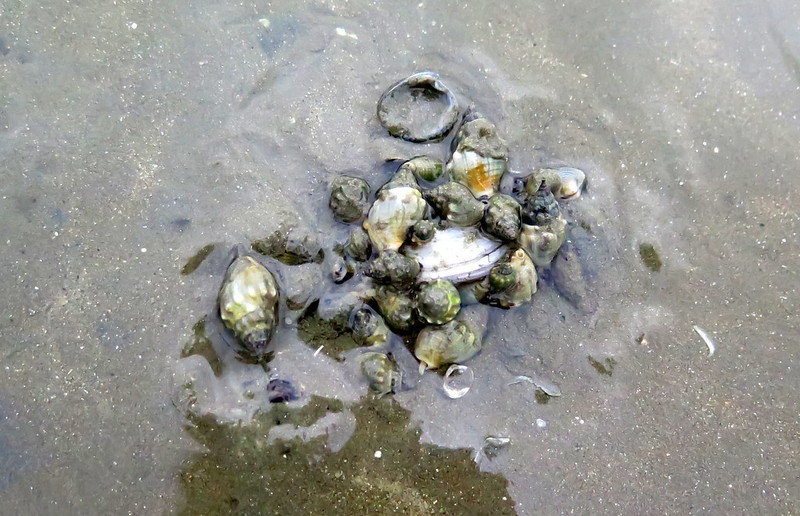 It took us a while to find our first cockles. At first we only saw these spiral shells up and down the beach, making a life in the soft mud. Figuring that we had no idea what to look for, we found holes left by other cockle hunters. When we found our first tiny cockle we were ecstatic. In the bag it goes! Then came another, and another, and at the next hole came five more. Pretty soon we were bogged down in cockles, picking and choosing the largest and freshest looking. 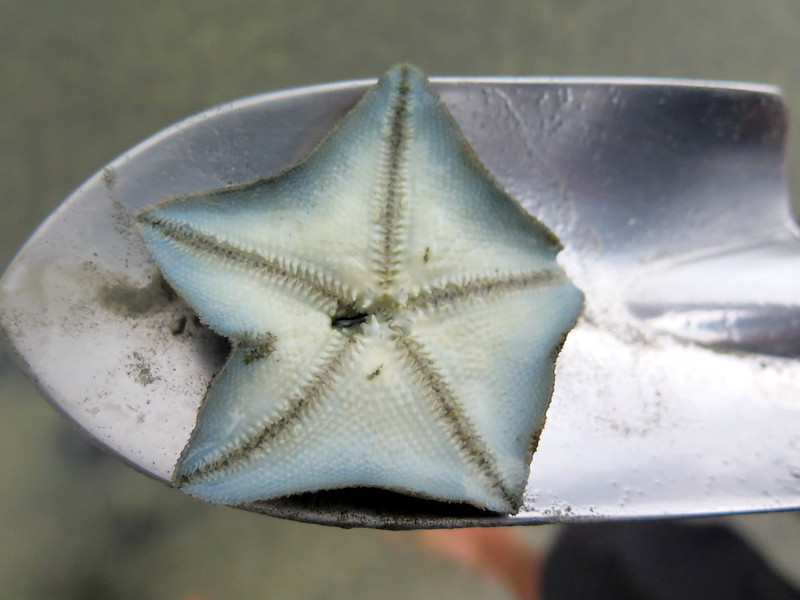 While foraging we found other sea life, this time sadly dead. I’d never seen the underside of a starfish so this was pretty interesting. 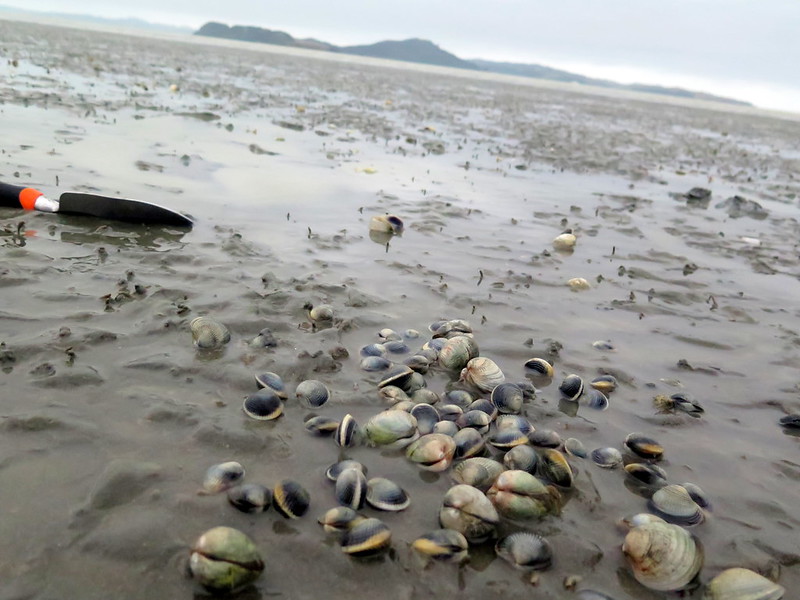 About half an hour later, we were proficient cockle hunters. The best method we found was to abandon the trowel and sift through the mud with bare hands. Grab a cockle, fling it into a nearby pile. When the pile gets big enough, pick out the five or ten biggest ones. To call this hunting is a stretch. The cockles are more plentiful than a berries in the summer, have no thorns, don’t hide well like mushrooms, and can’t run away. 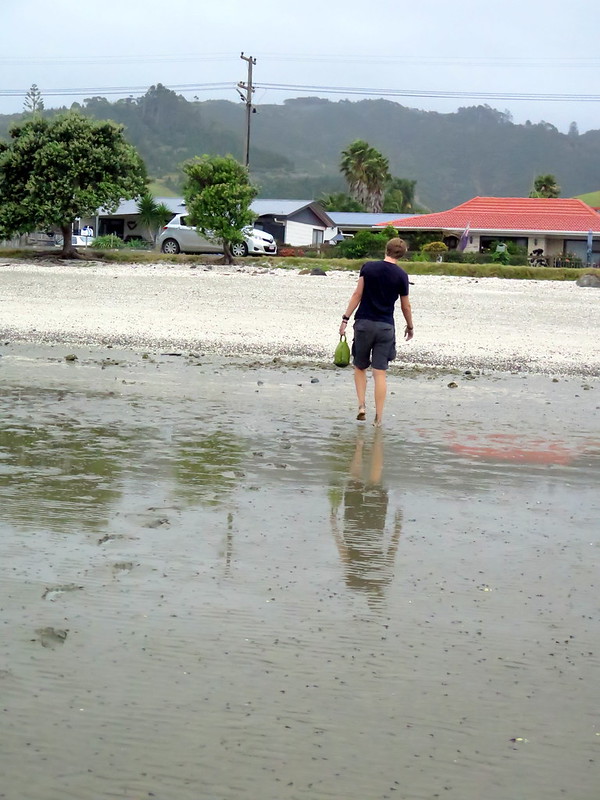 We wound up with fifty medium to large sized cockles and some seawater in our bag. We decided to leave the smallest ones to keep growing, and not take too many for just the two of us. It turned out that fifty was a good number for two people. If we go hunting again we would probably take the same amount. Overharvesting is really the thing to avoid. The cockle population can support a fair amount of hunting, but too much will cause population collapse. In certain parts of New Zealand they are under threat, with various monitoring and closure measures being taken to protect them. 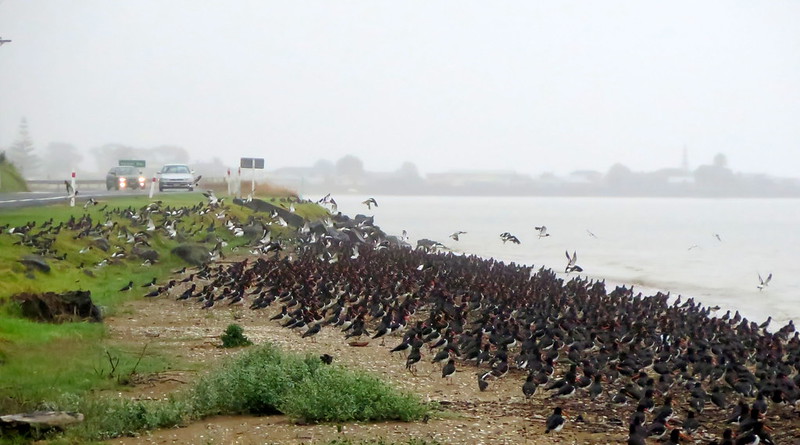 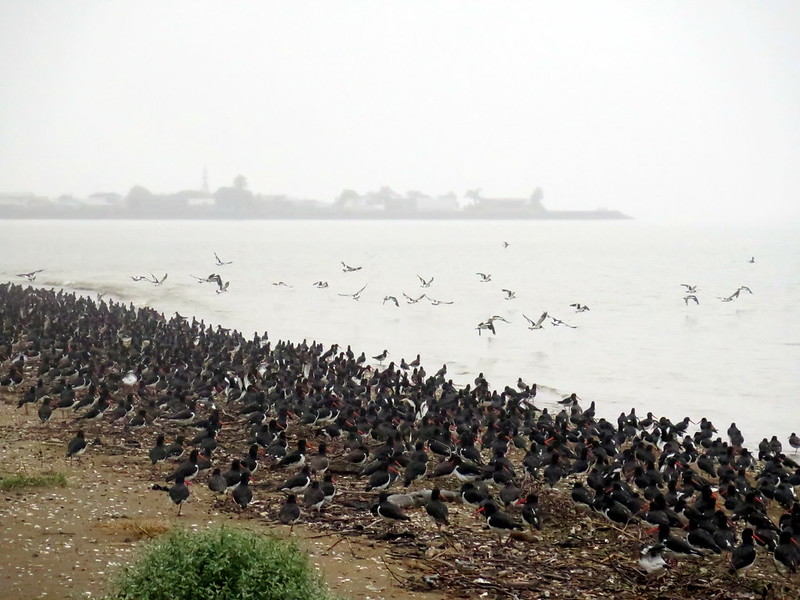 Bag of cockles in hand, we hit the road. While wondering how to cook them, looking up recipes, and managing the slight flow of water out of the bag, we came on a very curious sight. A hoard-flock of birds were camped out on the shore. It was like something out of a migrating animals documentary. They are the Variable Oystercatcher, and they were previously hunted, now protected with numbers rising. I could not find information on why or how a single flock got so huge, but there they were. The best thing about roadtrips is finding the unexpected around the next bend. 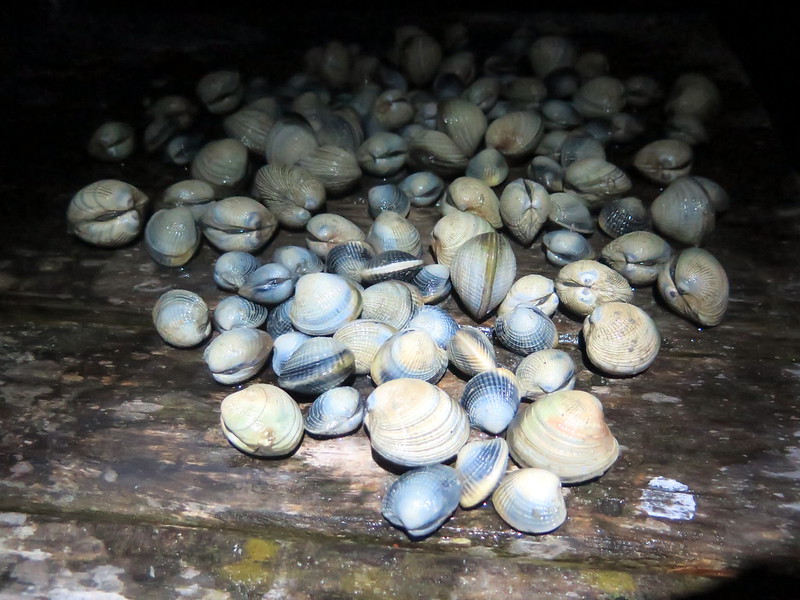 A night and a day passed. Adventures were had and Valentine’s Day evening came. Our recipe called for lemon, butter, and white wine. We’d luckily picked up a bottle of white on the outset of the trip, and the local minimart offered a lemon and a tub of garlic butter. Our cockles had been fed some crackers to help get the sand out, to a mild degree of success. Everything was ready for dinner, except us. 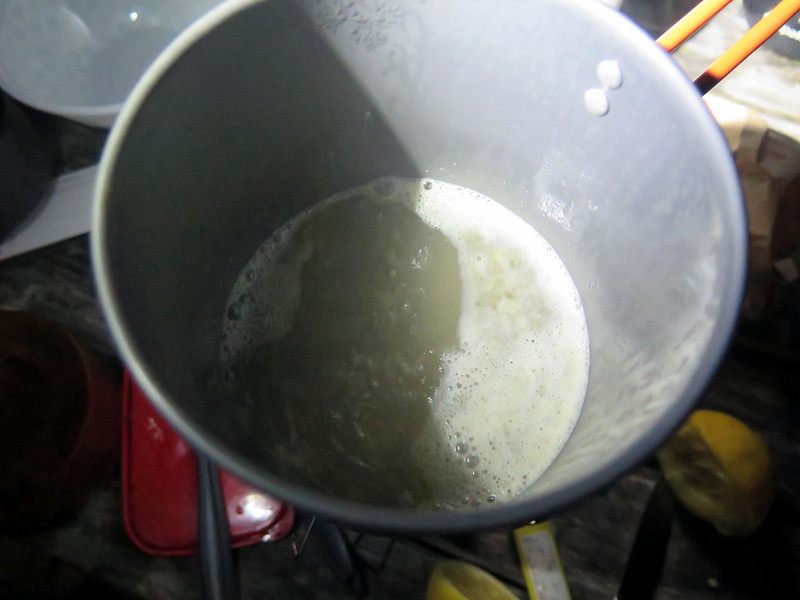 While I’ve spent time on a farm and know where the bacon comes from, killing my own meat is still a relative rarity. Natalie similarly hadn’t hunted an animal since childhood, so we were both a bit hesitant. We took a moment, said thank you to the cockles for providing our meal, then put them in the simmering wine and butter. To cook cockles you essentially steam them for a few minutes until they open. Those that don’t open are not good to eat. 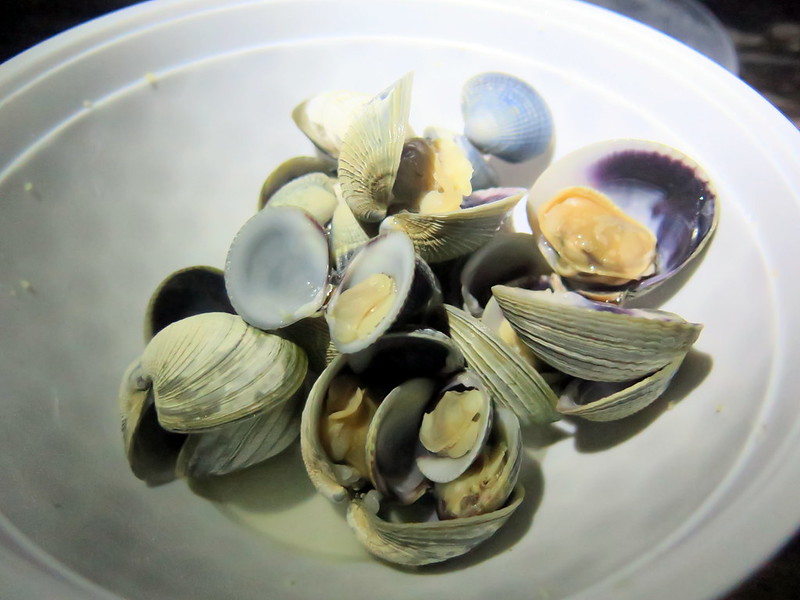 This is what they look like when they’re done. The meat comes out with just a slight pull. The cockles were delicious and every bit worth the time to gather and cook. They tasted better than cockles from the supermarket or at a restaurant, fresher and less chewy, without the sometimes overwhelming ocean-water taste. If you’re in the area I would highly recommend stopping for a quick cook-out. Beaches all along the eastern shore have them, ours was near Coromandel. 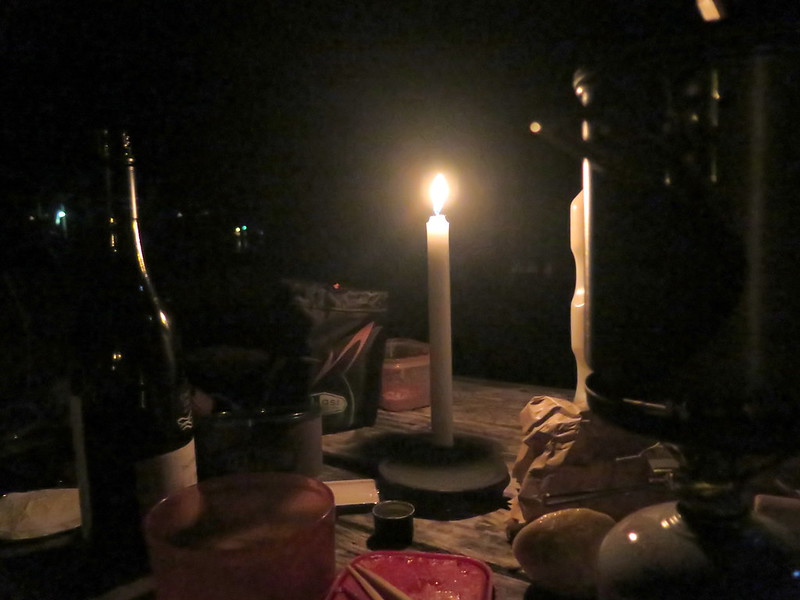 As good of a Valentine’s dinner as we could ask for. Candle courtesy of an early “in case of emergency” purchase on my part, which baffled Natalie at the time.