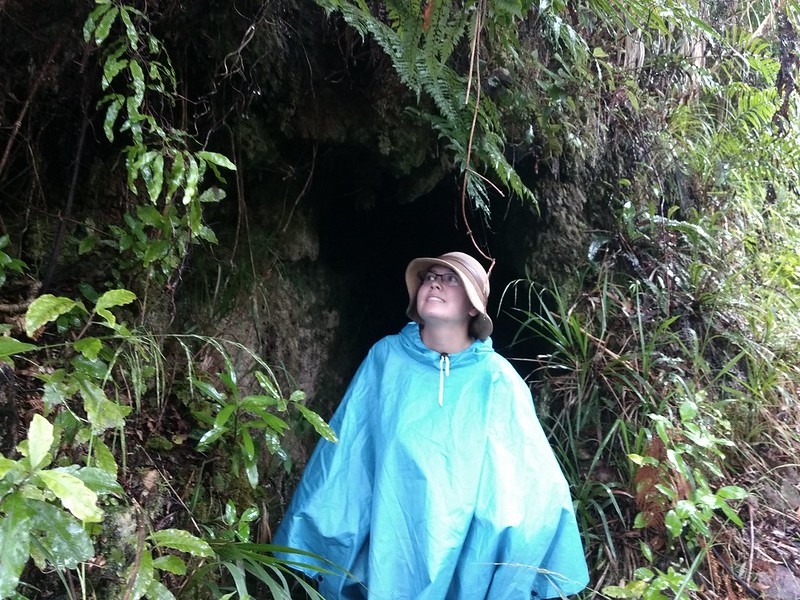 Sometimes a hike doesn’t work out. For us, a successful hike is one where either we reach our goal or we enjoy it so much along the way that the destination wasn’t too important. Our go at the Kaipawa Trig Track was neither of these things. 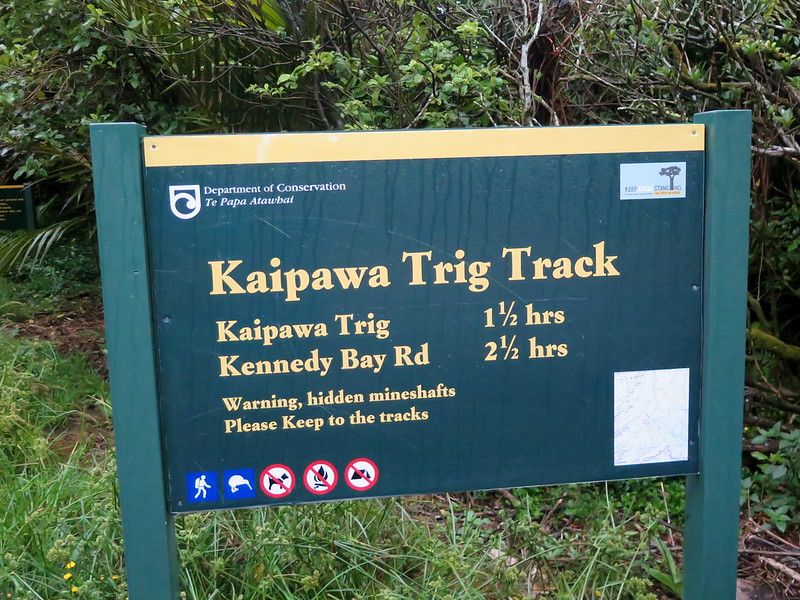 We’d be driving for a few hours now, bored and stiff. The weather was mildly gloomy, occasionally drizzling. At the top of a hill were parked several cars, a clear indication of a trailhead. Ponchos and boots on we wandered around the picnic area looking for the path in. We found it and up we went on a nominally steep but miserably slippery grade. The drizzle had wet down the whole trail and many sections were now just exposed, slick rock. This is normally a good indication that the hike will be tough, but we don’t mind increased difficulty. 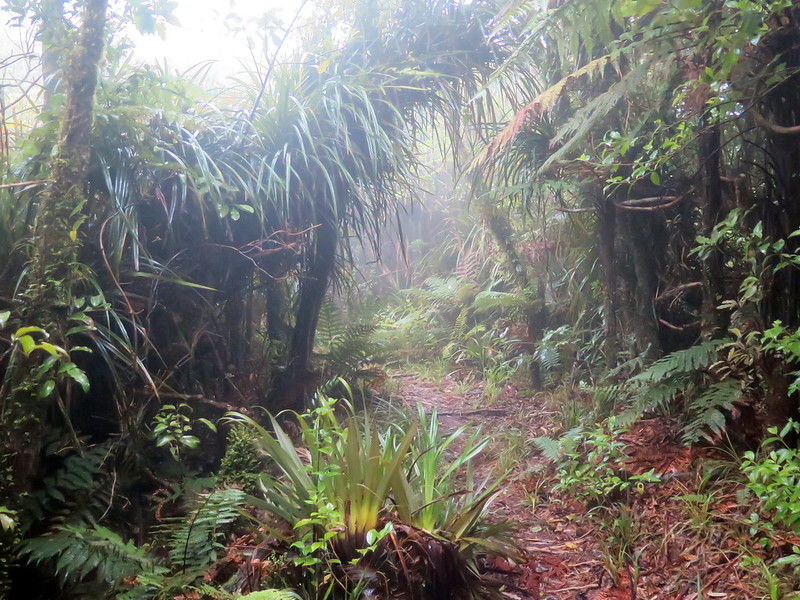 If the path were dry, I’d imagine this to be a fair trail with some mild climbs. As it was, we were growing increasingly wet, tired, and I’d threatened to fall several times. We’ve faced worse conditions and tougher climbs, but without a clear goal or reason for going, the hike became a slog. Because we need an end-point, we decided to go to the first Trig. Incidentally, you might be wondering what a trig is. We did too. It’s a marker used in geographical and geological surveys of an area. A trigonometric marker. We never quite made it to this one. 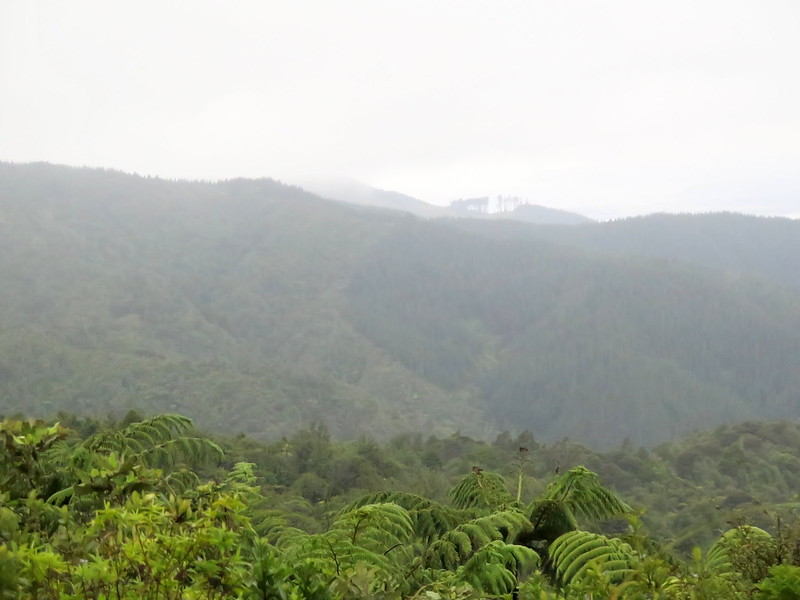 There were several hill climbs along the way, and the scenery was beautiful to be sure, but conditions were just bad enough that without the need to get somewhere, we decided to turn back. The thought of putting more sliding slopes between us and the car was not palatable, and by this point in our journey the ponchos we bought in Cusco were starting to let in water and smell kind of funny. 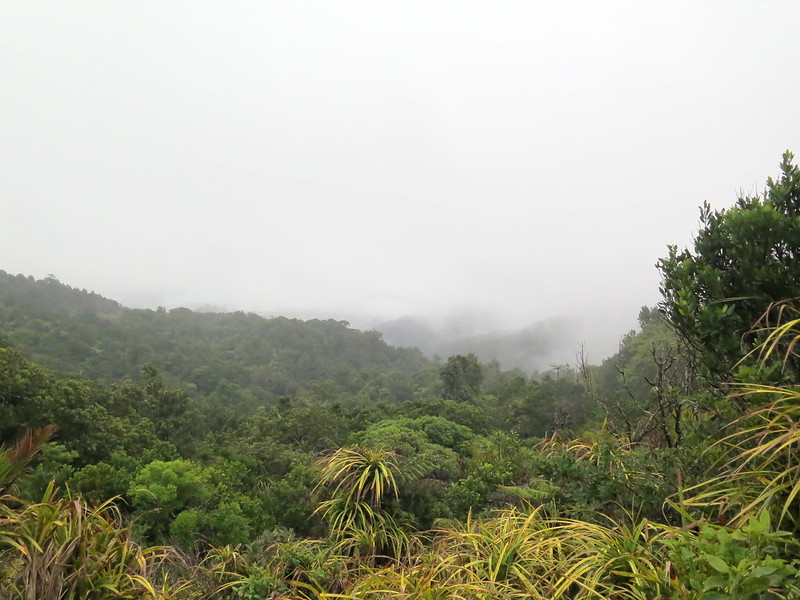 In the end we got what we wanted, sort of. We’d seen a part of the New Zealand wilderness and stretched our legs. We felt somehow unfulfilled at the end of it though. We didn’t reach our goal, and mist and cloud made the trail seem much more constricted than it otherwise would have been, all the vistas obscured by fog. 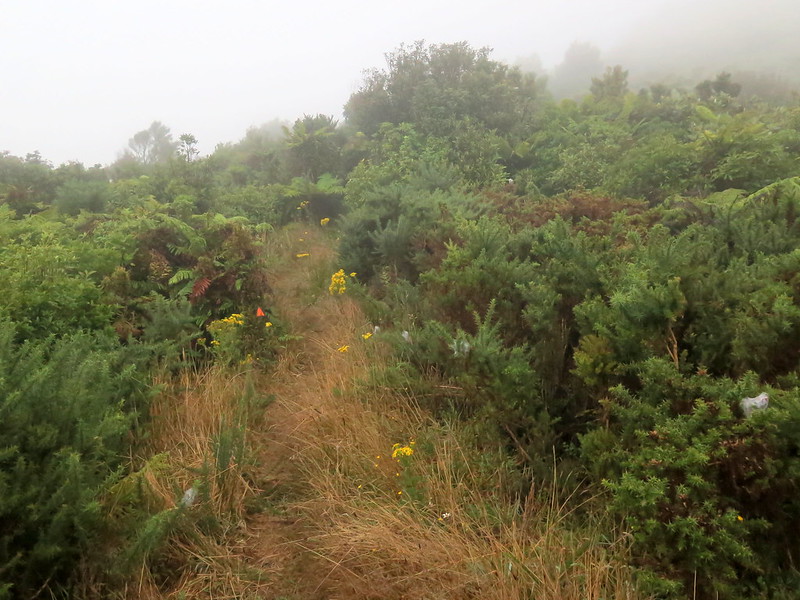 Looking back on the photographs we took, the hike seems much more interesting than we experienced it. Ours was a hood-blinded, sweaty trek. From the pictures we took though, the nature around us was abundant and vibrant. New Zealand’s tramping site lists this track as going through “regenerating forest”. A regenerating forest is one where something took out a large portion of the older trees, and saplings quickly established themselves.  No information was provided on whether this forest is under human assisted regeneration or natural regeneration after a fire.

Either way, the verdant green of the forest shows it’s doing very well. The rain also gave me an opportunity to see one of my favorite sights in nature : wet moss. 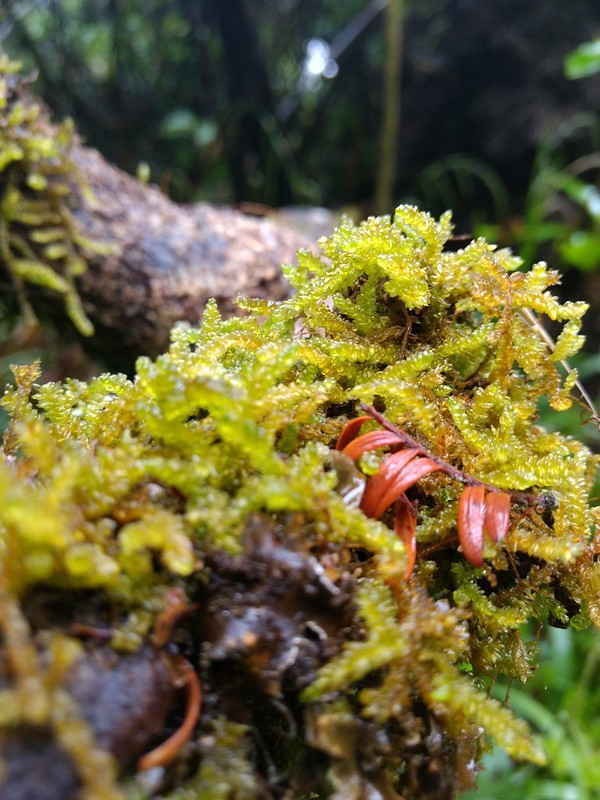 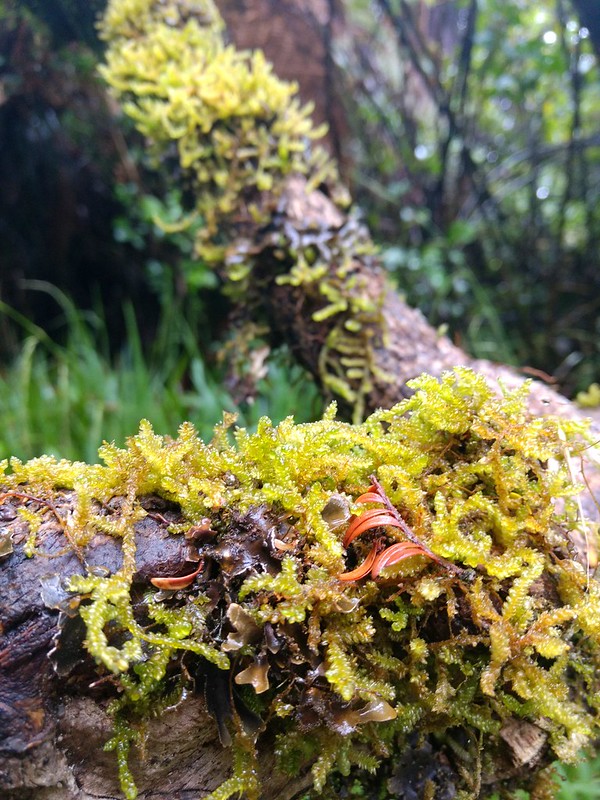 Well, to feel really. Wet moss under the fingertips is a lovely texture, and really only available in rainy forests. Done appreciating the small things along the way, we headed back to the car. On the way there I almost fell a few times, but to my credit, my balance has increased tremendously over the course of our travels. For someone with better balance than I, the final downhill before the parking lot would make for an amazing slide. Safely back at the car, we were very ready to dry off and get on the road.