Intro: We’re stuck in Australia for two extra weeks, waiting for Russian visas. Here’s one of the things we did in the meantime!

For the first time in months, I have a full kitchen at my disposal. Australia has a lot of bananas—markets here are crammed with bananas, including the somewhat forlorn-looking, past their prime bananas that find their way to the discount cart.

Banana-bread was inevitable. But it turns out my tolerance for making banana bread is about once a week and after my first round baking Saint Deb of Smitten Kitchen’s Jacked-Up Banana Bread (https://smittenkitchen.com/2006/11/jacked-up-banana-bread/), we still had 4 more bananas languishing in the kitchen. I returned to Smitten Kitchen for another banana recipe, but the only recipe that wasn’t banana bread was a banana crepe cake recipe that used only one banana. If readers wanted more banana, Deb suggested layering the cake with sliced bananas. That was a no go, since at the time we thought Stoytcho was allergic to raw banana.

But what if I filled it with fried sliced bananas? I googled around until I found a recipe I mostly liked. I subbed the white sugar for brown sugar, because that just seems right when you’re working with bananas. The final cake was a 3 hour process of making crepes, frying bananas, making filling, assembling cake, and finishing up with the butterscotch topping. But it was TOTALLY worth it—with a combination of bananas, brown sugar, and cream cheese, this cake takes the cake. 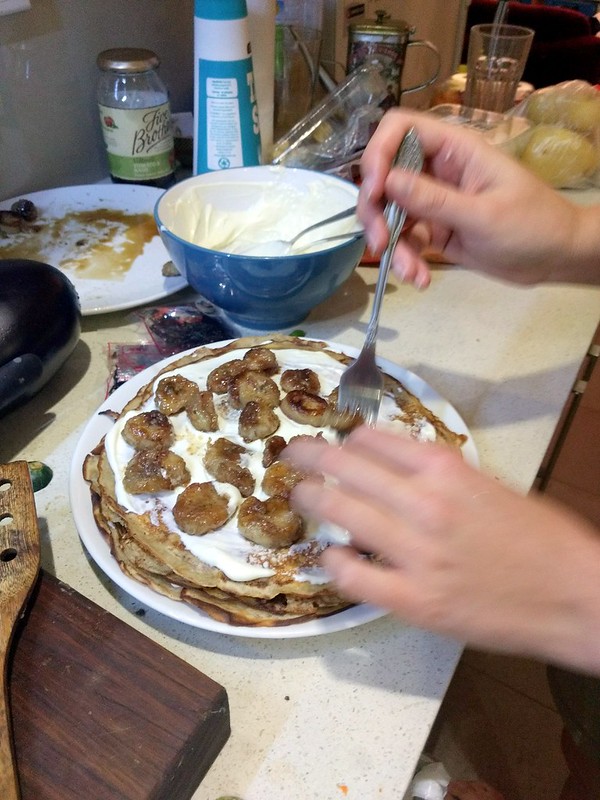 For the fried bananas:

I simplified Deb’s recipe a lot because I’m in someone else’s kitchen without access to a mixer/blender/spatulas/etc. It did have a mortar and pestle and whole spices, so we did fresh grinds of all the spices, which was simultaneously better tasting and a huge pain in the hands. The kitchen also lacked standard measuring cups and spoons, but it turns out our camping kit has measurements for cups on the side (yay!) and we just fudged the spoon measurements with silverware in the kitchen. So take all of the smaller measurements with a pinch of salt. 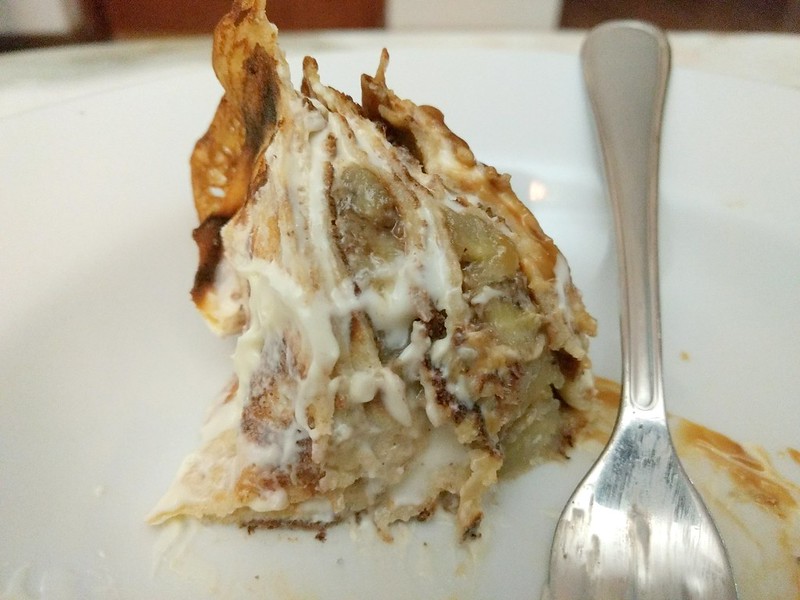 * – As mentioned in step 6, we had some issues with the butter separating from the topping. This could be due to overusing butter (we eyeballed 15 grams from a huge stick), or some other condition. Even if you use too much butter, you can just dump it off.

** – Deb’s original recipe called for walnuts, but we only had macadamia nuts foraged from a nearby orchard. These lent the cake a decidedly more tropical flavor.