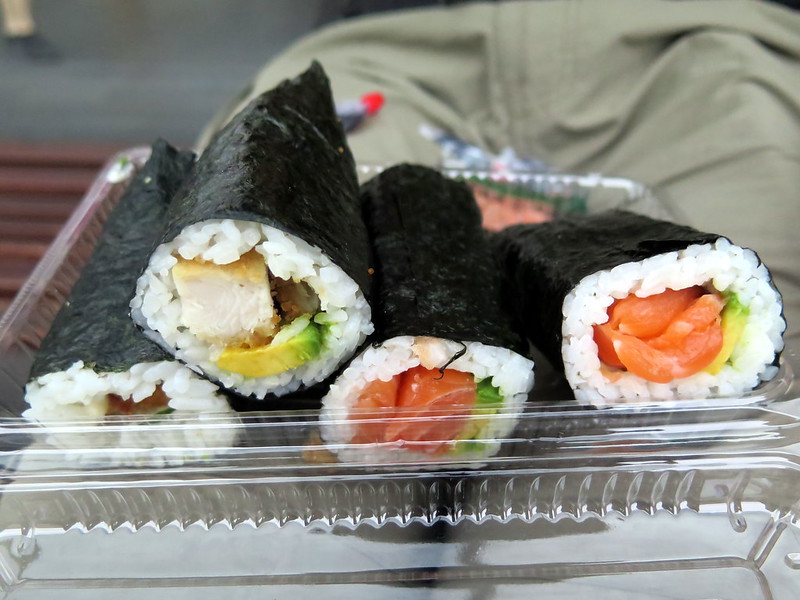 Sushi is not what we thought we’d be eating when we got to Australia – it’s expensive, slow, sit down dining. Australia has fixed all of these problems, and sushi-to-go shops sell rolls of every variety for a dollar or two. Not tiny slices of a roll, but full length, half-a-meal rice and seaweed wrapped slices of fish. It’s good sushi too. Not master-sushi-chef good, but on par or better than a nice sushi place. We loved getting our fish fix this way, and any time we were out sushi inevitably made it into our diet. It was just a super convenient way to get fresh, light food, and we really, really hope these things make it stateside by the time we get back. 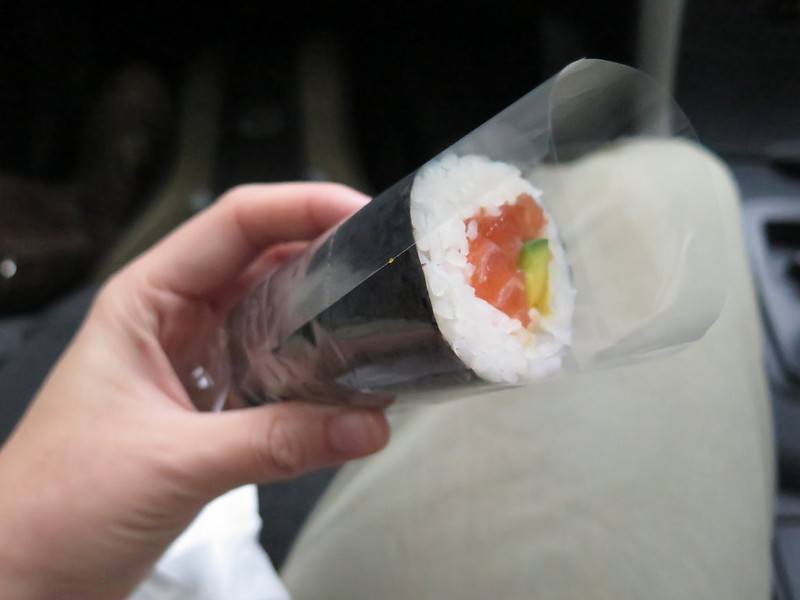 In the US kangaroo is an unheard of meat. It’s expensive, hard to find, and not super fresh. Once again, Australia to the rescue. Kangaroo are a pest in this wonderful land, and the government gives out licenses to hunt them. In fact, the entire population suffers if they’re not kept under some check, since they have only dingos and humans as natural predators. Hence, plenty of kangaroo meat to go around – just don’t be surprised if you find a bit of bullet in your slice. The only kangaroo you can eat is wild hunted – farming the national symbol is unsurprisingly not allowed.
The meat is lean and the taste is gamey, somewhere between really meaty beef and buffalo. It’s easy to cook, goes well in all sorts of dishes, and is very often on sale. The iron-rich aroma and slightly tangy taste will live long in our memories.

Delicious salty malty tangy bread in a jar, or vile sour yeast paste. I love it, Natalie hates it. It tastes like concentrated russian kvas or some sort of soy sauce paste. I like it on toast, plain. Most Australians seem to prefer it with butter. My initial steps were something like half a teaspoon for a slice of bread, if that. I wound up going straight to a full teaspoon and up once I got a hang of the flavor. There is definitely such a thing as too much vegemite, so a tiny jar of it lasts a good long while. 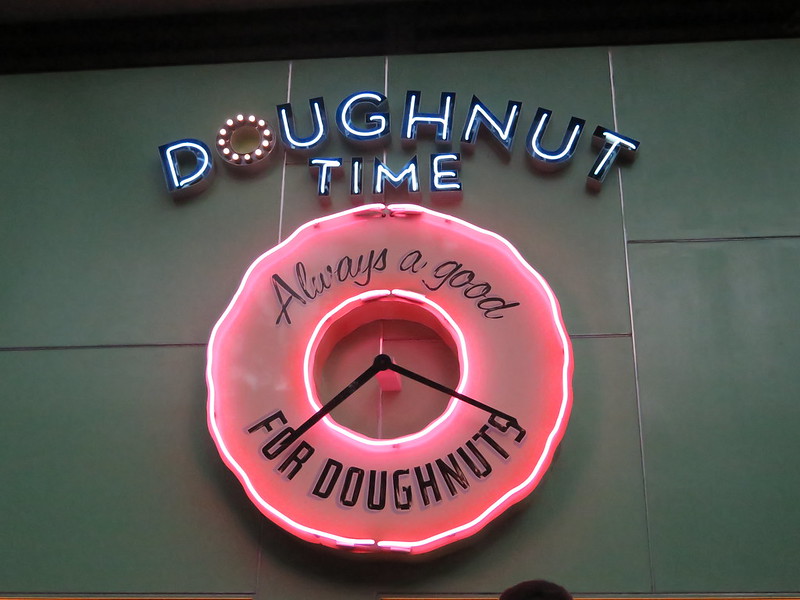 Unique to the east coast of Australia is a small chain of donut shops that serve a small but very interesting selection of donut creations, including a set of vegan donuts. If you’re in the area they’re worth a stop, and have very cool toppings like strawberry cheesecake, honeycomb and crumbcake, and strawberry and passionfruit. The picture is worth way more than these words, the donuts are decidedly creative and delicious.

Once a single store serving fresh, plump churros and thick hot chocolate, the San Churro store has expanded into a chain. We visited the Bondi Beach one regularly, mostly for the chocolate pick-me-up after a long swim. The churros feel like a necessary part of the experience but have gone a bit thin and crunchy compared to the olden days. The hot chocolate is as thick and delicious as ever. They offer a spicy hot chocolate which I accidentally got once – it’s not my cup of chocolate, but the mild kick was an interesting sensation. For me, the really amazing trick is the spoon standing straight up in the chocolate. I’ve never seen chocolate like that before, and I would really like to have it around during winter or, really all the time. 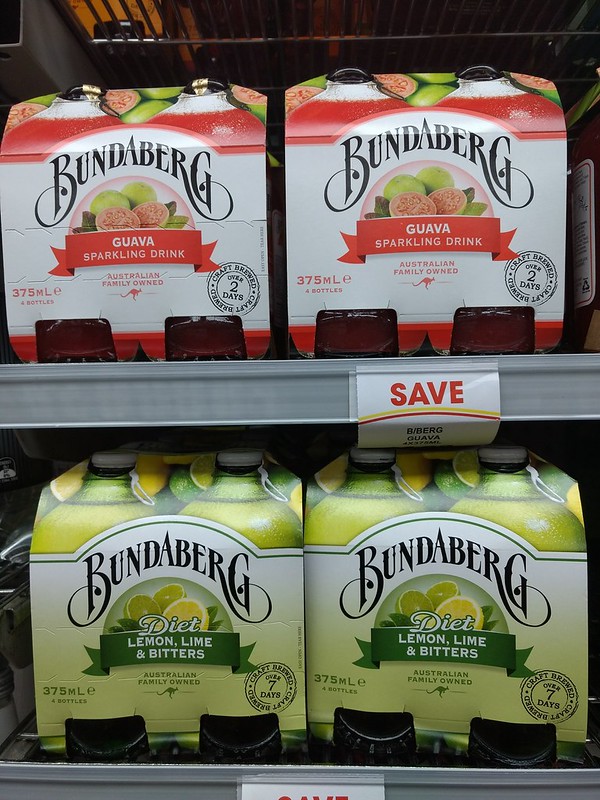 It’s true that the US has Bundaberg, mostly the original ginger beer flavor. The products not available are the rest of the lineup, including the hard-to-find winter ginger beer which is full of christmasy flavor goodness. Bundaberg is nigh omnipresent in Australia. Available in almost any store (at least where we looked) where it takes up a whole chunk of the soda section, it’s also found in most eateries in the drinks fridge right next to the Coke and Fanta. It’s not a great idea to go overboard on it since it’s still a sugar filled soda, but any flavor whenever you want? Australians (and New Zealanders) have it made.

Milk chocolate covering two malt biscuits with chocolate cream filling in the middle. They’re very good, and they’re apparently iconic for Australia. Sold since 1964, they have a wide following in Oz and now come in a variety of flavors. The black forest cherry or caramel versions are pretty good, but I think the original is the best. We stocked up during a sale – about two dollars per pack of six. Otherwise they’re a bit pricey at three to four dollars. The famed “Tim Tam Slam” is something I thought our friend made up as a joke, but apparently it’s a real thing. Take a Tim Tam, bite off both ends, and use it like a straw to suck up your favorite drink, usually tea, coffee, or milk. It’s great silly way to drink your milk. I’m not sure the slam method is any better tasting than just eating the thing, but it sure is fun. 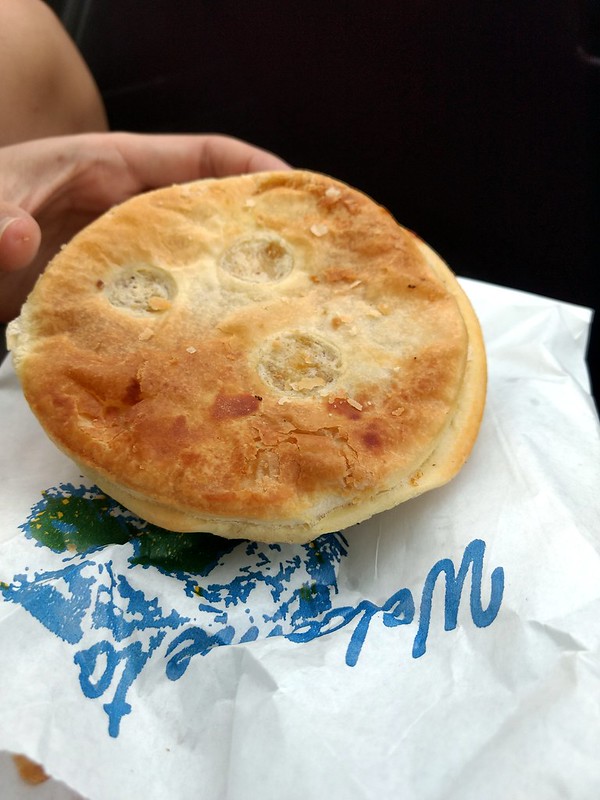 They’re iconic in the UK, but Australia and new Zealand also have a claim to meat pies, available basically everywhere, all the time. Australia gets the final credits for this one, since it was the last place we ate them and they have a kangaroo filled pie. In general though New Zealand seems to have a slightly larger variety and higher availability.