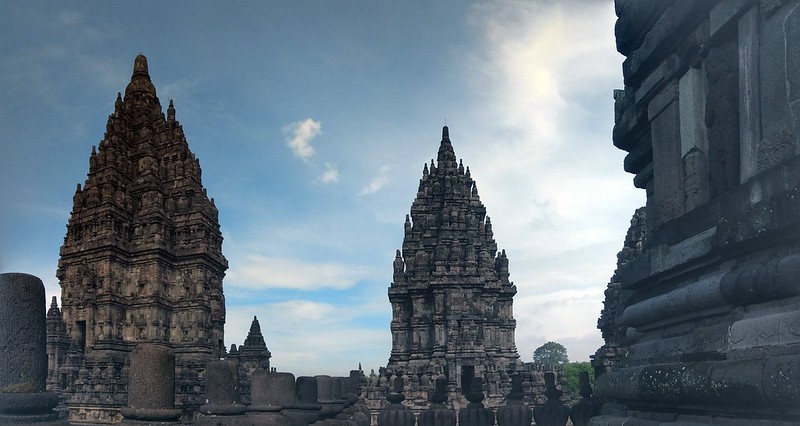 A visit to Jogjakarta is incomplete without seeing the massive temple complex that sits just on the edge of town, forty minutes or so by bus from the center. Prambanan is a towering and expansive series of Hindu temples, thought to have been erected during the 9th century when the ruling dynasty of Indonesia shifted from Buddhism to Hinduism and answered the Buddhist temple of Borobodur with Prambanan. 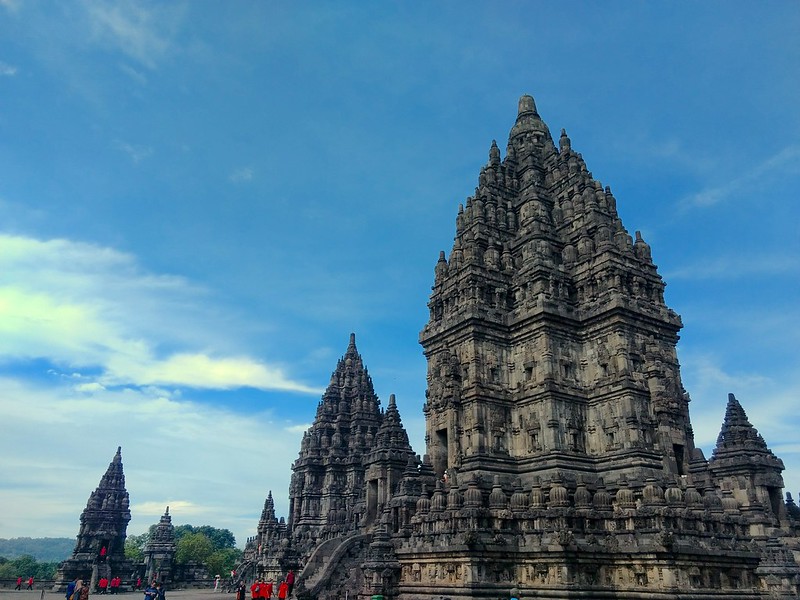 Photos do little justice to the feeling of the place. Unlike Borobodur where you can scale the temple itself so that it seems smaller the closer you get, Prambanan offers no such relief. The nine central towers do exactly that – they tower over you and climb to incredible heights. In my opinion the eye is fooled even further by the shape of the towers themselves, dwindling to needle-like peaks which seem all the further away. 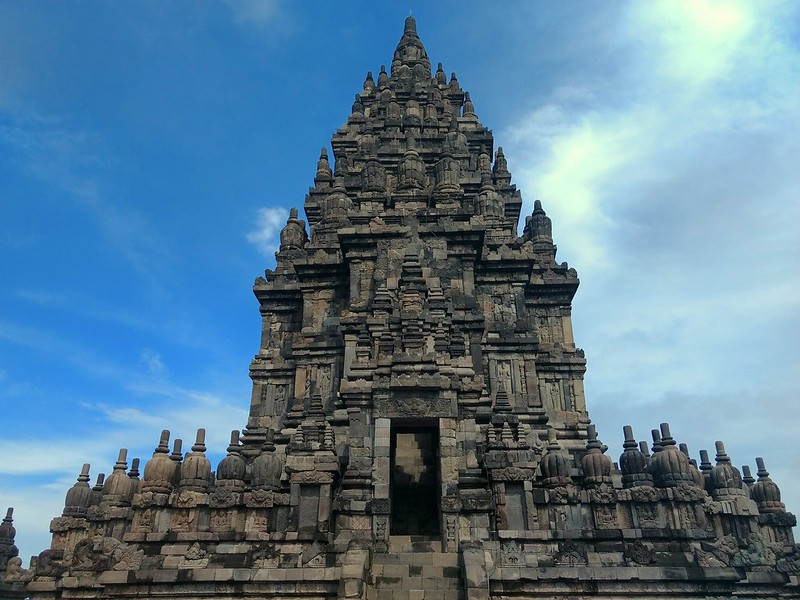 Each spire has a set of stairs leading up about halfway, leading to a path encircling the temple and a door into the tiny inner chamber. The path takes you through a relief carved religious story or legend. This is a photo of the tree of heaven, a common theme in many Indonesian works. 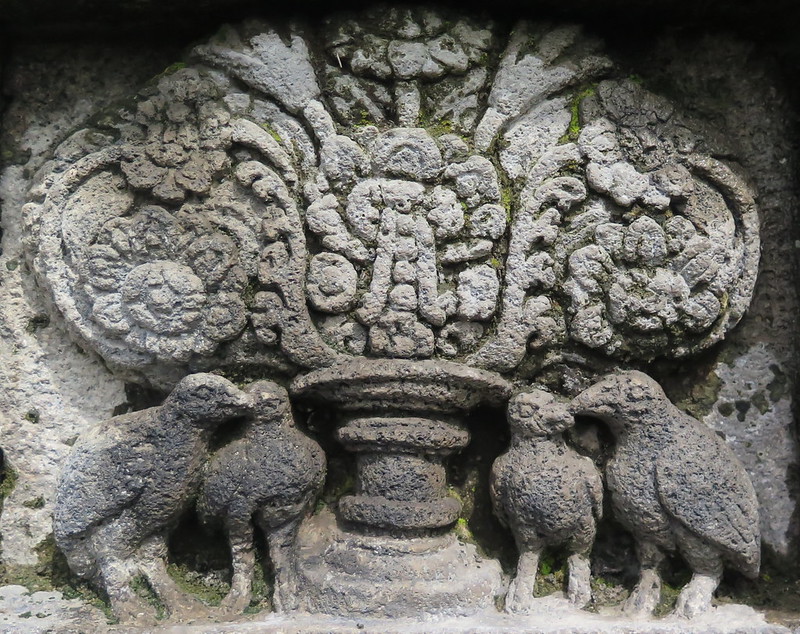 Inside each spire is supposed to be a deity or their representation though most of the statues are missing. 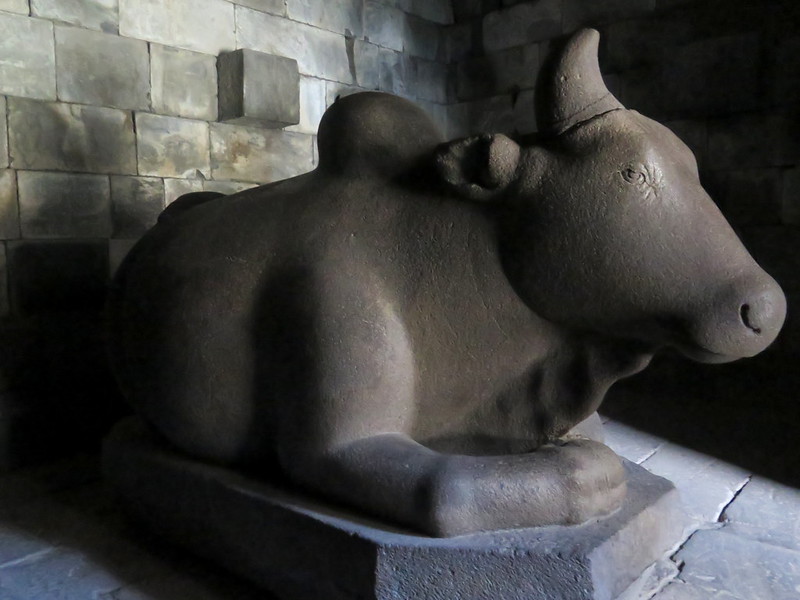 The surviving ones are treated with care, though many are replicas and the originals are housed in museums. The outsides of the temples are covered in carved statues and faces, often better preserved than the shallow reliefs inside. 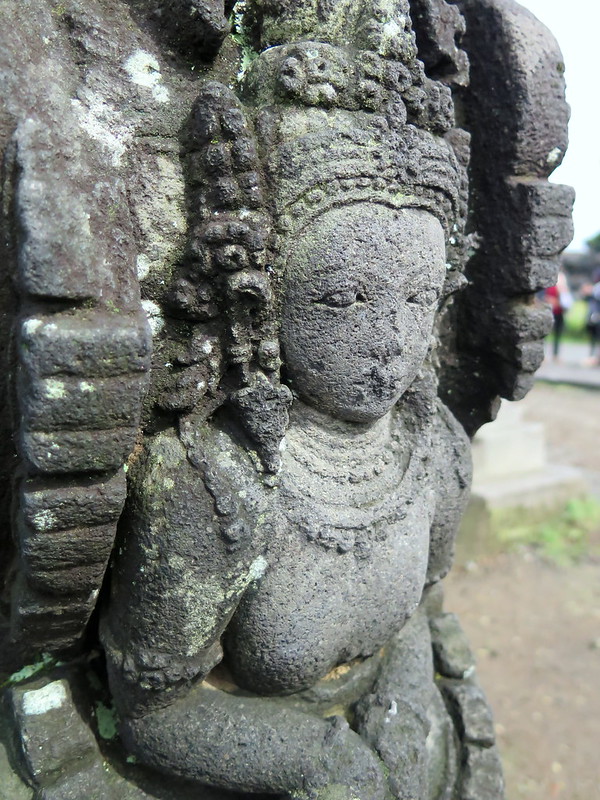 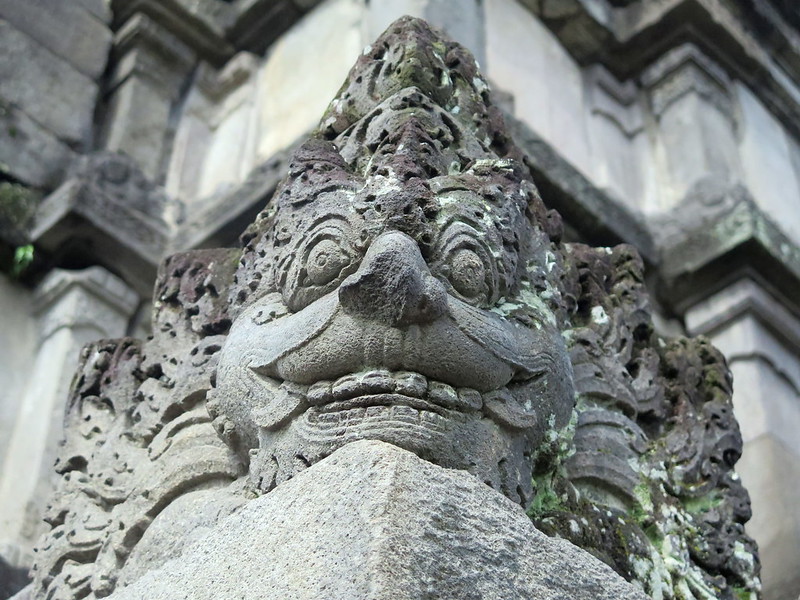 The temple area includes four separate temple complexes – Prambanan, Lumbung and Bubrah temples, and the Sewu temple. All four are in various states of repair, having been historically plundered for stones and statues and in recent times suffering damage from earthquakes. Prambanan once housed many temples of various sizes in concentric squares. Now only the central temples stand, and a few of the smaller outer temples. The rest are waiting in piles to be rebuilt. 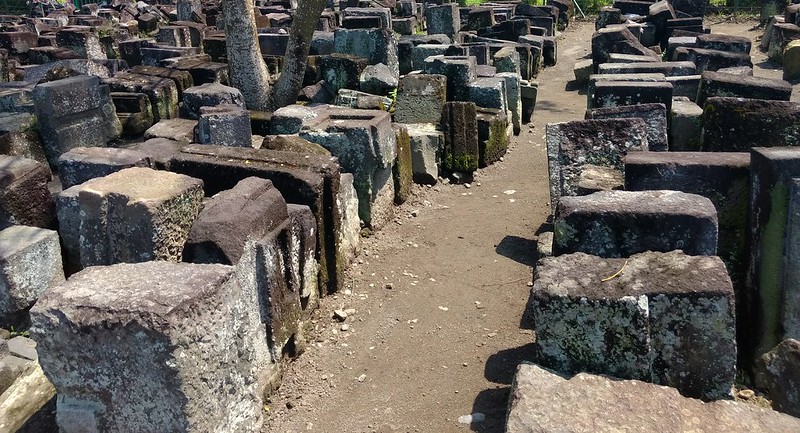 We saw reconstruction teams working on putting some of the smaller temples back together. Fitting the pieces together in the correct order and making the structure stable again is hard work. Not only is the location not marked, but each piece weighs a ton. Maybe not literally, but heavy enough that one person can’t lift it. 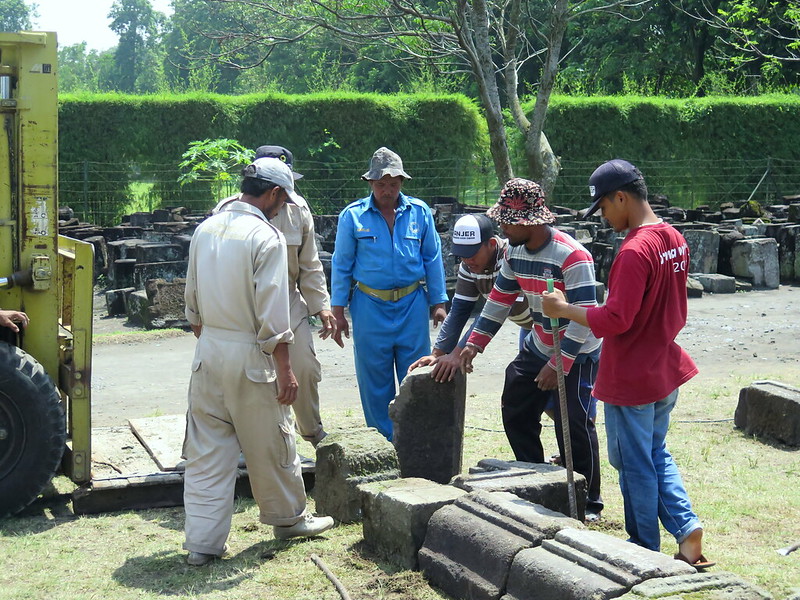 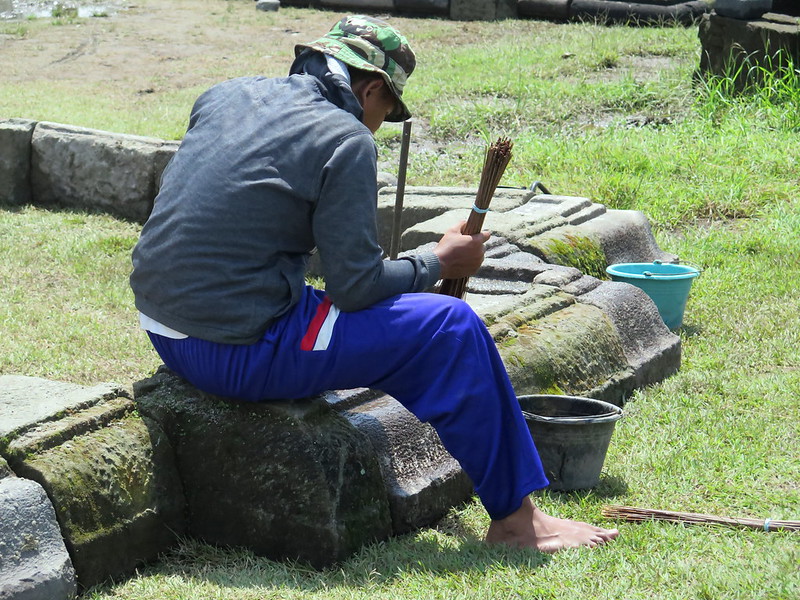 For all the wonder that is Prambanan, the other temples deserve a visit. They are smaller in both area and height, but offer more diverse temple styles, statues, and reliefs without the crowds of tourists. When we went over to Sewu temple, there was literally no one else there. 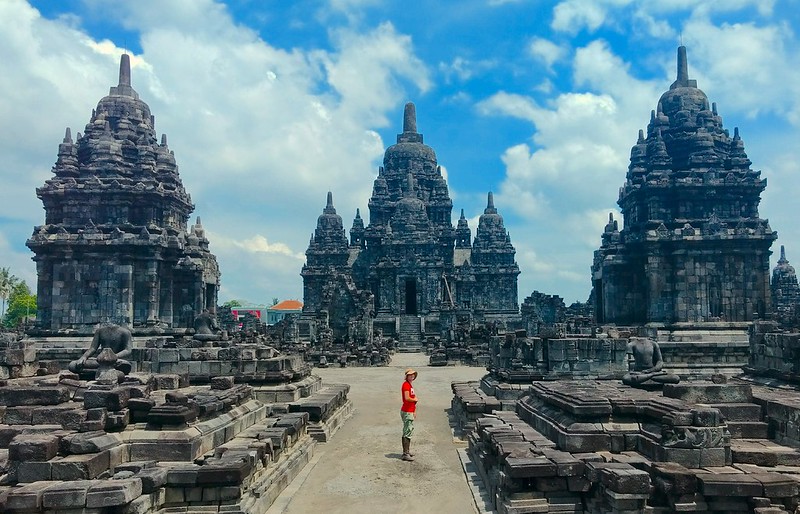 Here you can see not only more of the art and architecture, but also of the destruction wreaked on the temple site by the earthquake. These temples were once fully repaired, now awaiting time and funds. 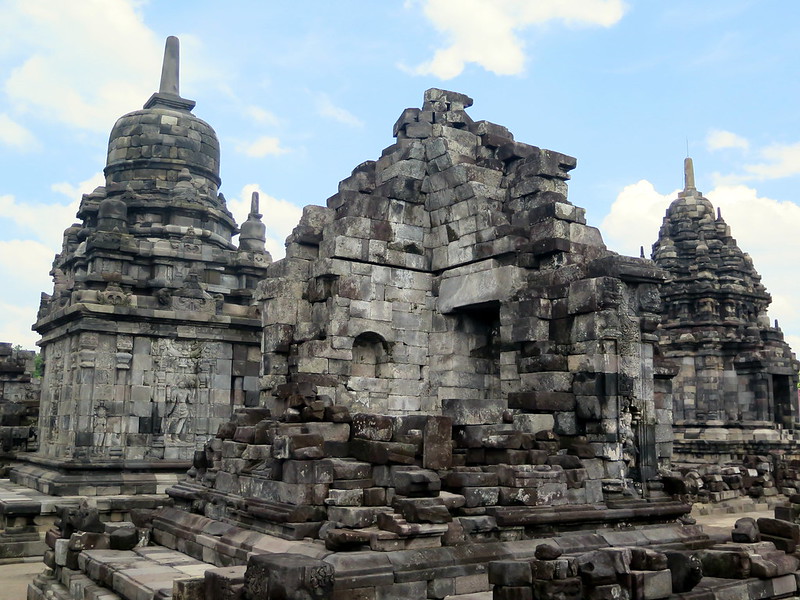 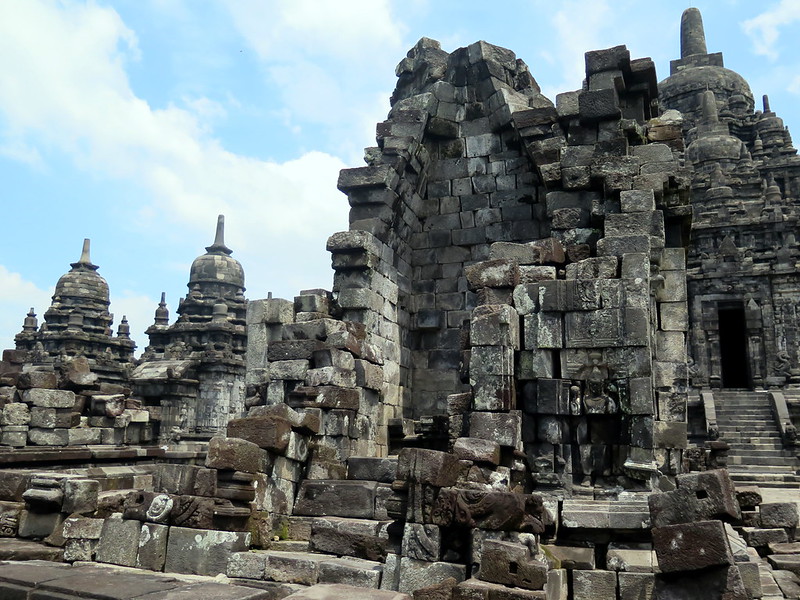 The Sewu complex is full of statues, usually damaged in various ways. 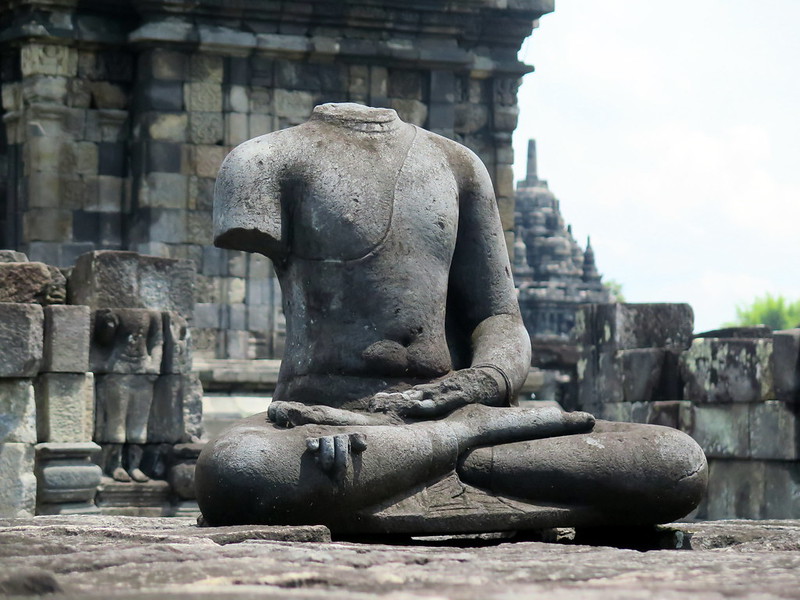 It houses reliefs waiting to be put in their proper place. 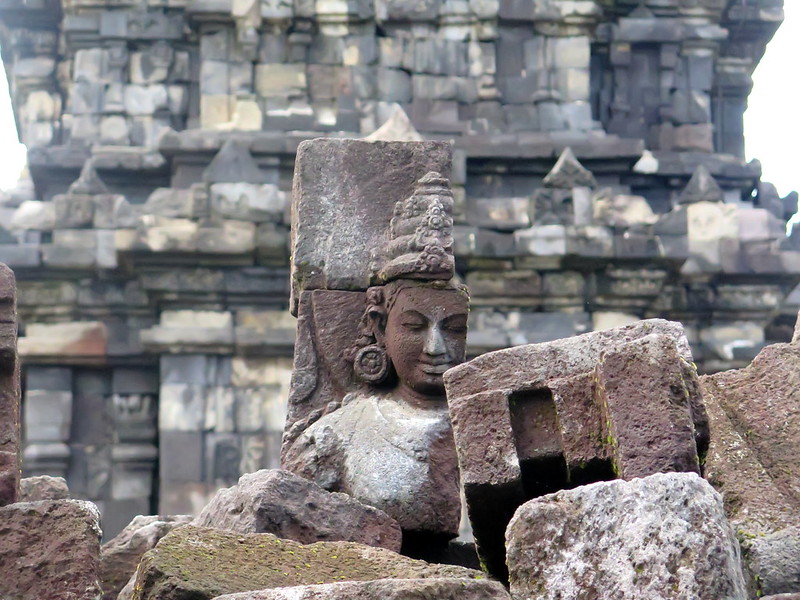 And is a storage grounds for spare spire tops and temple stones, intended either for their original location or to fill in a partially complete temple. 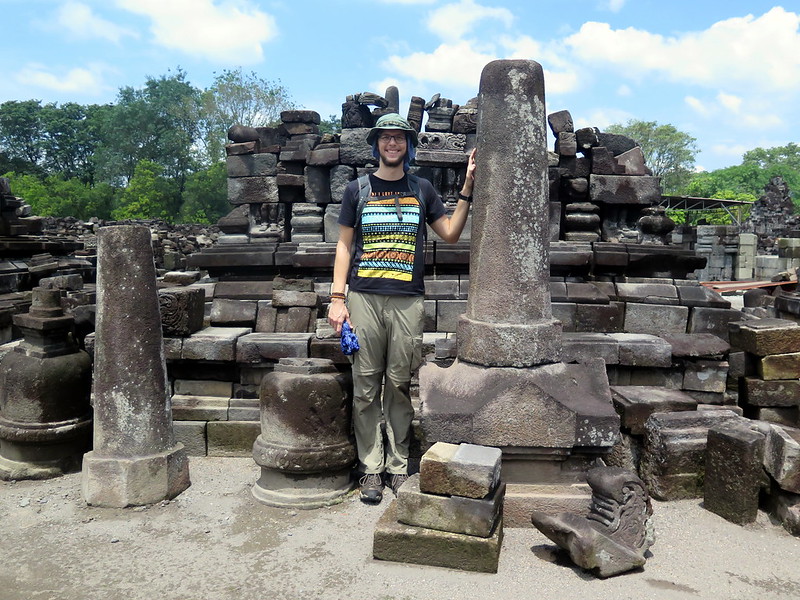 For tourists who stand out : be prepared for the local crowds. As with all other attractions we visited in Indonesia, groups and individuals stopped and asked us to take a photo with them. Sometimes this meant a selfie, other times it meant we were going to be in some classes’ travel photos. It’s exciting and fun, but eventually I get tired of it. Natalie does a bit better with photo stamina. 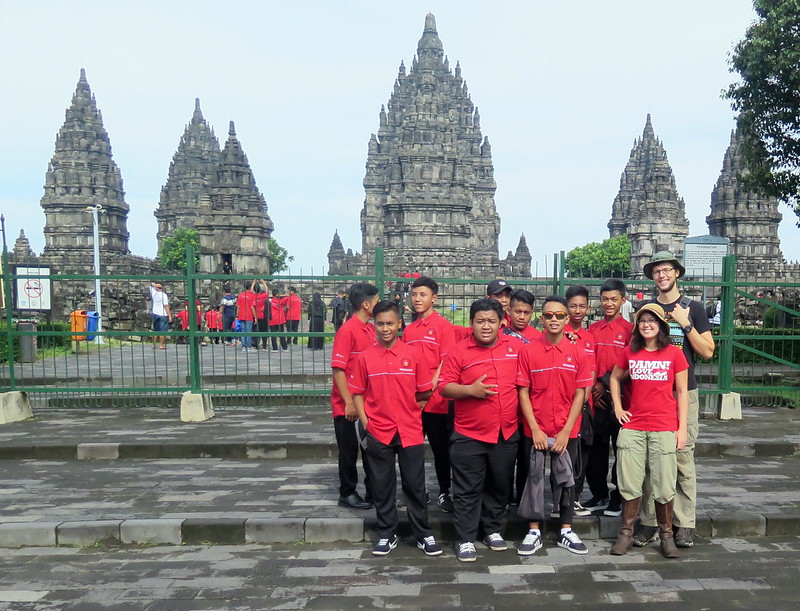 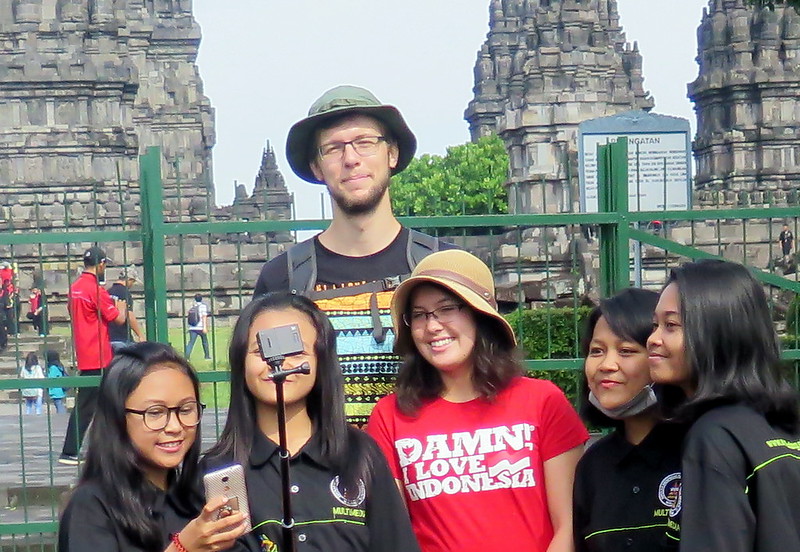 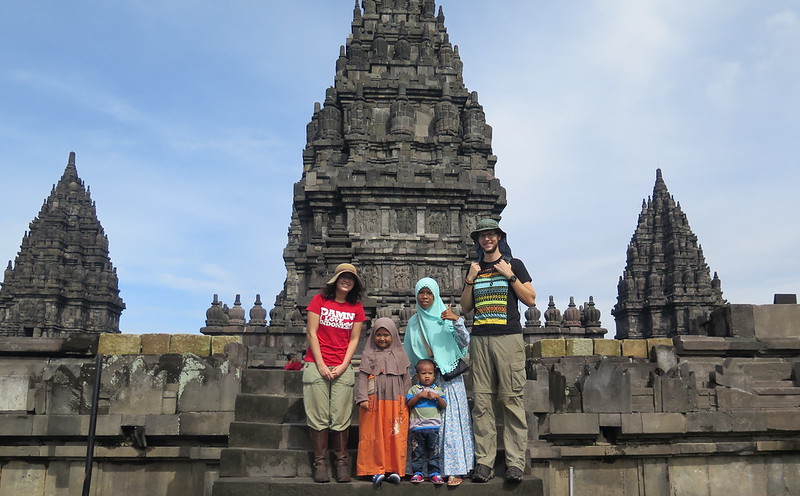 Finally, a few last shots of the entire complex. We found the entire day to be completely satisfying. A quick breakfast, temples and tourists, and a bit of haggling at the end. Be prepared with water and a bit of people stamina, and come as early in the day as humanly possible – the grounds get sweat-and-sunburn hot quickly, and there’s a lot of walking to be done. 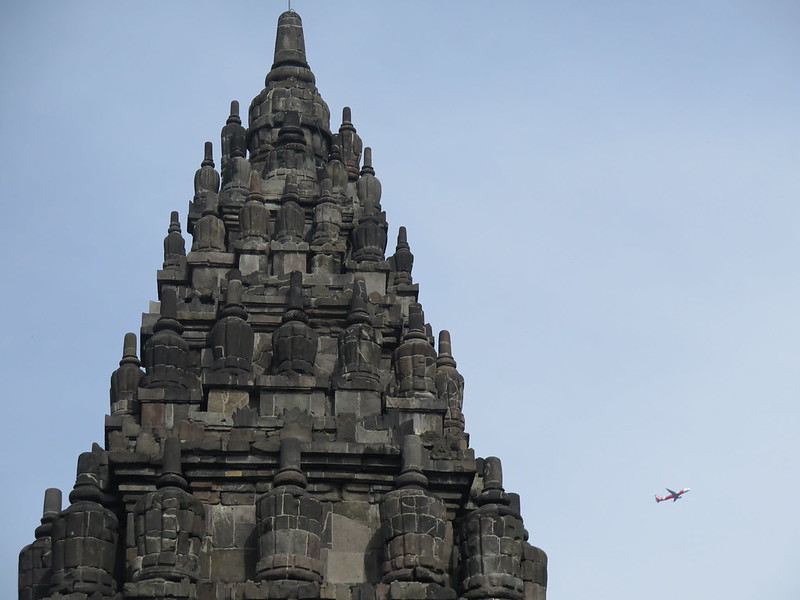 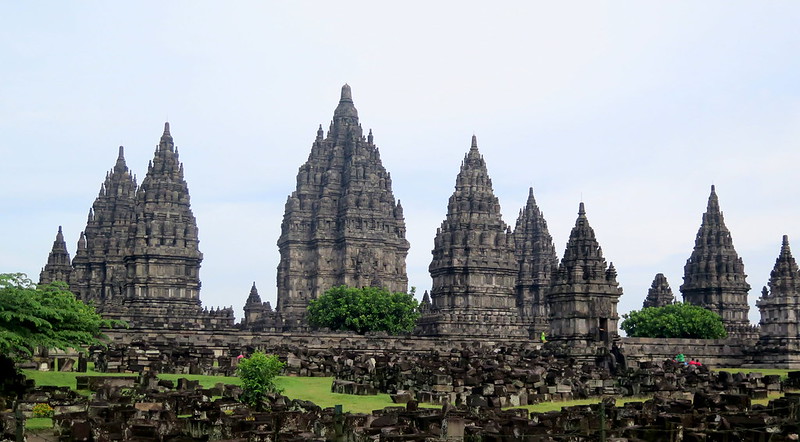