In our travel through Java we almost accidentally got to try two of the most popular drinks in the country. Despite being widely available and delicious, I think it’s entirely possible to go visit the islands and miss these because they’re so ubiquitous they’re not advertised in any way – they just are. 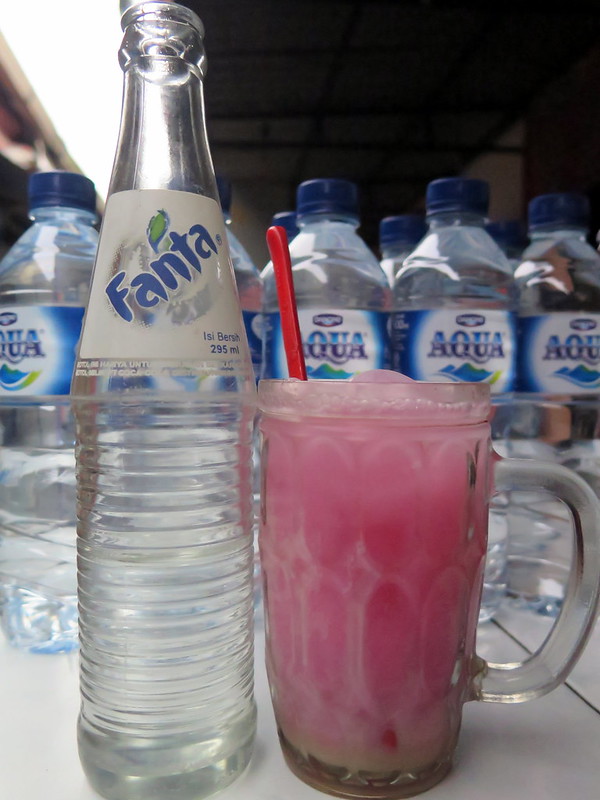 The first is a a summertime treat that’s close to a milkshake and perfect during the sweltering heat of .. all the seasons in Indonesia.  It’s called soda gembira, and its key points are : pink, fizzy, and  sweet (overwhelmingly so in restaurants). We had it for the first time at a stall in the near-Prambanan food market, where Natalie decided to try something random for breakfast. I was suspicious but soon ordered one for myself. This drink is childhood-level tasty. The recipe is extremely simple. The amount of syrup and condensed milk dictate how sweet and milky it will be, while more soda water dilutes the taste. We like the soda to be cold to begin with, but it’s not required. Ingredients (for our level of sweetness):

Pour the milk into a tall glass, then the syrup. Fill to near the top with soda, throw in an ice cube or two, mix well and enjoy. About the syrup : it’s main quality is that it should be red. In Indonesia the two most popular choices seem to be rose syrup and coco-pandan syrup. I’m pretty sure strawberry syrup (or even strawberry milk) will work just fine, as well as cherry, or really any fruity syrup. If you want to try the real thing, coco-pandan syrup is available in specialty stores and Indonesian markets in the States. You can also make it at home with this recipe.

The second drink is a warm and spicy milk and ginger concoction that remains our favorite drink of the trip. Susu jahe – that is, milk and ginger, is readily available in any of the cities we visited and seems to come in a million variations. Most common is a pre-boiled ginger concentrate and milk, but some stalls serve a crushed root of ginger in a glass of hot milk, while some boil the ginger in the milk for a bit, then serve. They all come out good with the exception of crushed ginger in hot milk – it’s ok, but not gingery enough. STMJ is a semi-available and far better version, and our favorite drink. It takes a bit more preparation and isn’t suited to fast-paced street markets. Nearly every food area will have a susu jahe cart, not so with STMJ. Indeed, we actually only found one – the night market at Blok M, at the south end of the 1 bus line. There the pace is slower and the STMJ cart serves most of the market. 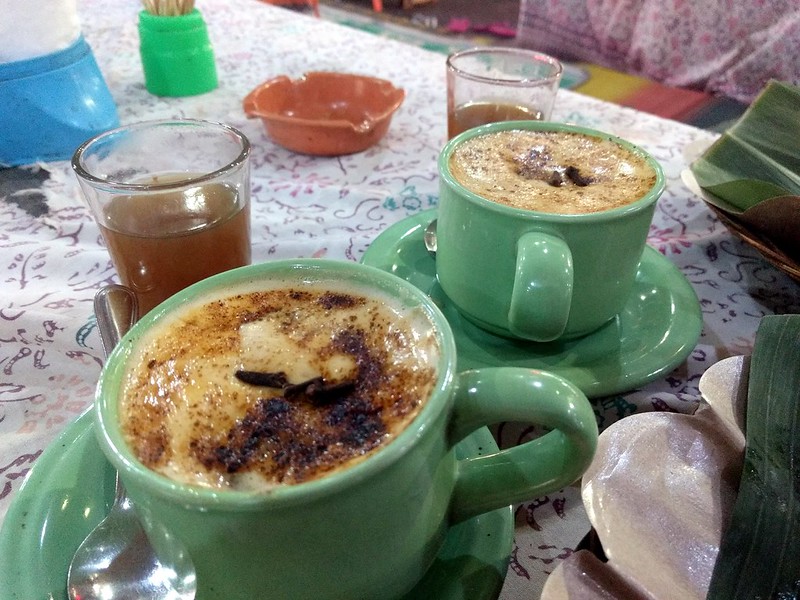 The acronym stands for Susu (milk) Telur (egg) Madu (honey) and Jahe (ginger). It takes a bit more work than a standard susu-jahe but boy is it ever worth it. Even adding honey to the standard susu jahe is a step up, but the egg takes it to another level.

The ingredients for this one are right in the name :

We based the syrup on the excellent ginger milk tea recipe from this site, filled with recipes of Indonesian dishes. There are a number of ways to make this, including this recipe which shows a typical process, but we replicated the way we saw it made at the food market.

Start by heating up the ginger syrup and milk to a boil. Pour the two liquids into a glass, about half-way to two-thirds, then stir in the honey. The egg yolk comes last. Pour a bit of the hot mix into a small cup and whisk the yolk in. Keep adding from the ginger-milk until the yolk is foamy and somewhat heated. This is done to prevent the yolk from cooking rapidly and turning into flakes. Lastly, Whisk the yolk into the rest of the drink. The people that were making ours just put the whisk into the cup and spun it between their hands. They also added the amazing touch of torching the top of the drink to give it a creme brulee taste. Sprinkle your choice of spices on top and enjoy.