If you look at Tokyo on a map, especially from a bit further out, you might notice that Tokyo seems to have a bit of oceanside real estate to the south and east. You wouldn’t be wrong, but most of the water found near the center of Tokyo is taken up by the harbor and is, like most harbors, not great for swimming. To get to a usable, quiet beach, you would have to go quite a ways out, which is what we did. About an hour and a half of rail got us to the village of Kurihama, and a bit more of bus and walk got us to the beach of Tomyozaki.

As far as contrasts go, there are few bigger than that of city and countryside. Japan follows the pattern mostly in terms of building height, density, and noise. Outside of Tokyo and other large cities, it is quiet. Very quiet. The cleanliness, safety, and convenience of the city continue while the rest fades away, leaving only a calm, clean, and modern town.

One of the more interesting things we saw along the walk was this ferry. 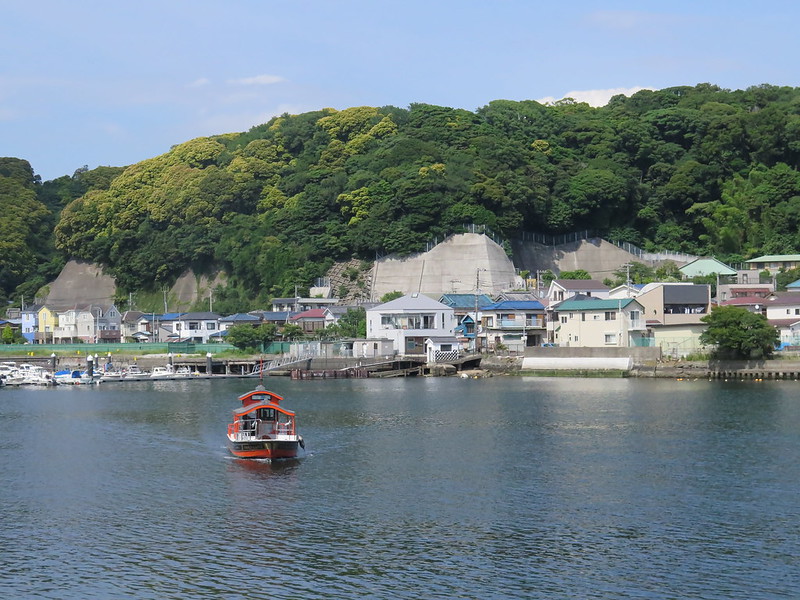 It had gone about halfway across the bay, a few minutes worth, when it suddenly turned around. 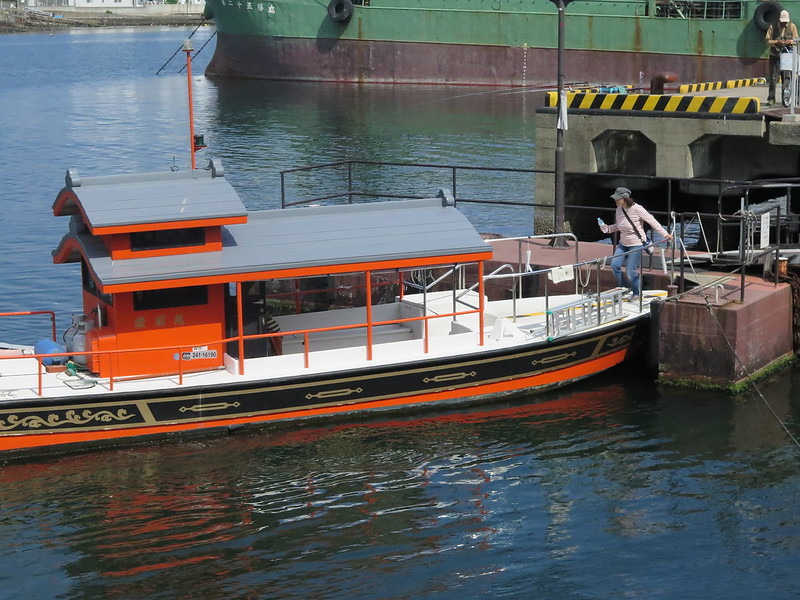 It had heard this lady and went back to get her so she wouldn’t have to wait for the next trip! 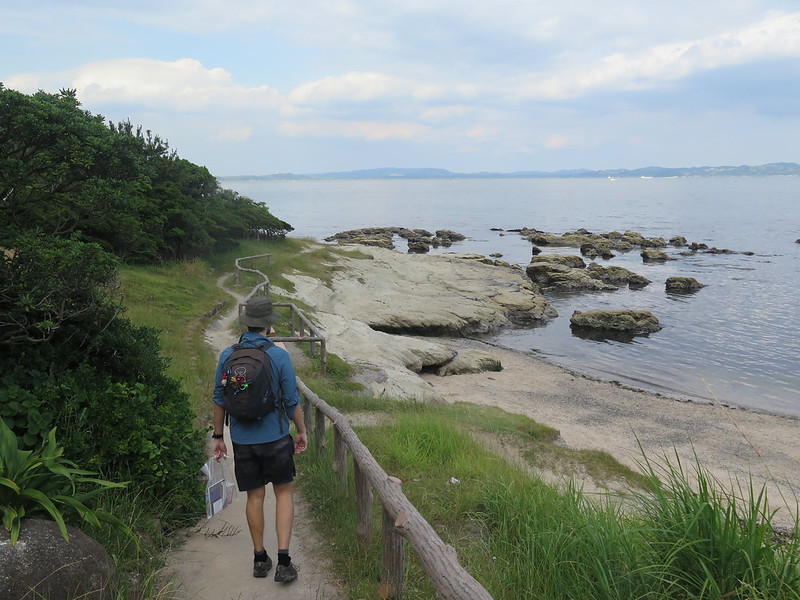 After the town had entirely faded away we found ourselves on a supremely quiet sandstone coast. We might have been the only visitors there at that instant, though later we did meet others. 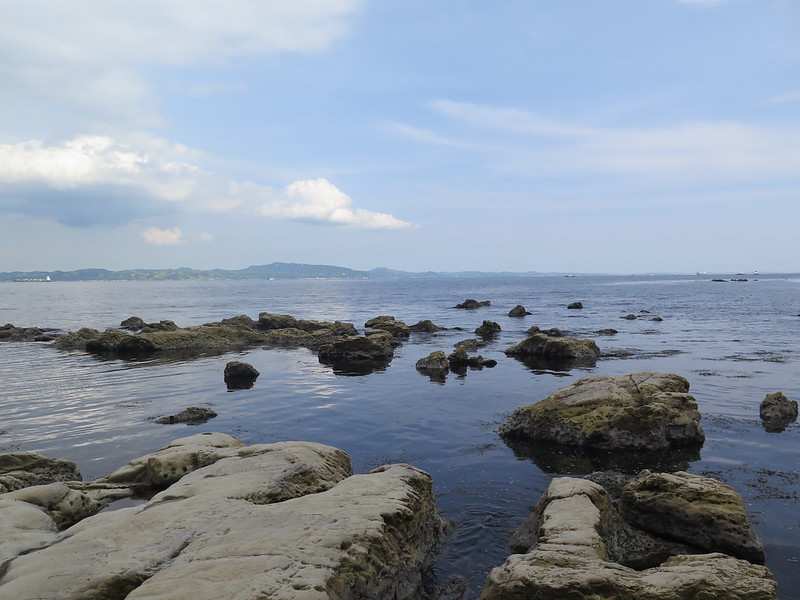 The view out onto the water was as serene as could be. Though there had been a small harbor earlier along the walk, it was around the bend and back quiet a ways, fairly out of sight and sound. 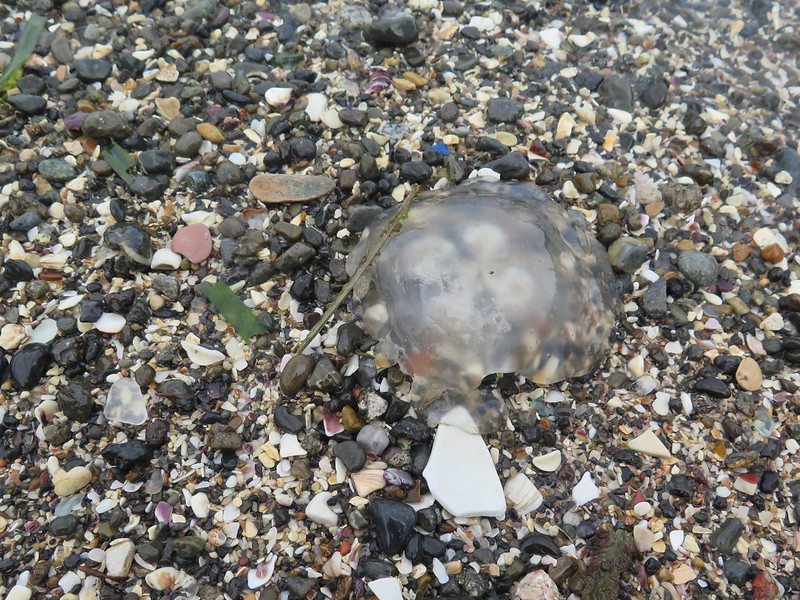 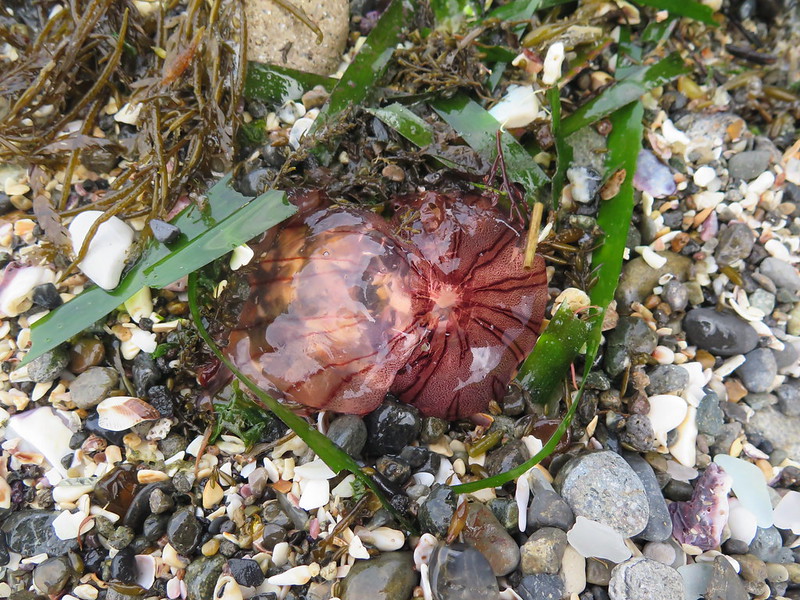 We saw a few jellyfish swimming but most of our sightings were on land, quiet dead. The beach was incredibly clean, contrasted for us even further by having just come from Indonesia. 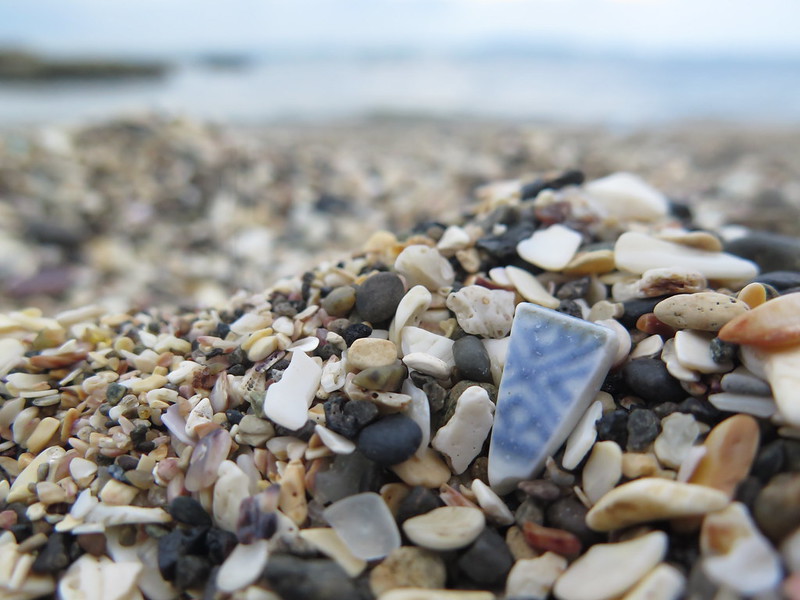 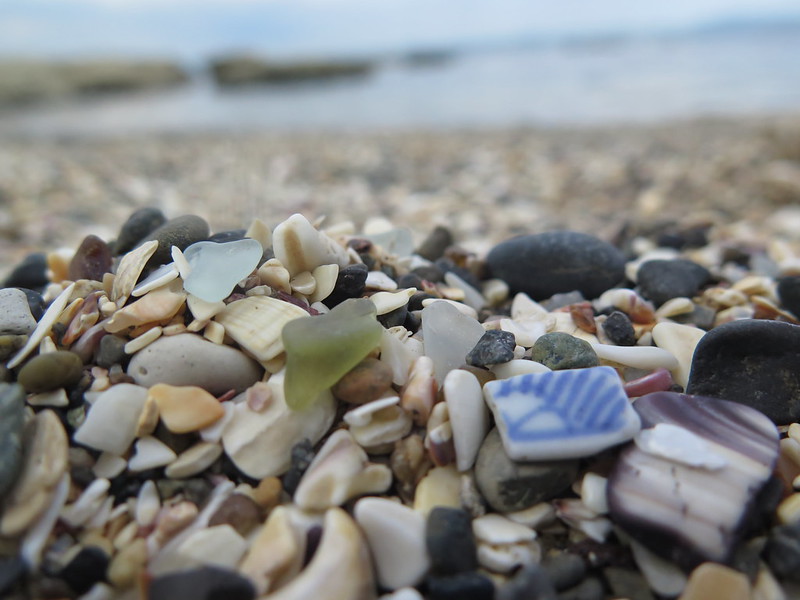 Tile and beach glass were to be found all over the beach. I felt there must have been a tile factory somewhere nearby, or maybe a ship had spilled a pile of it sometime ago. Either way, we gathered a good sized pile. 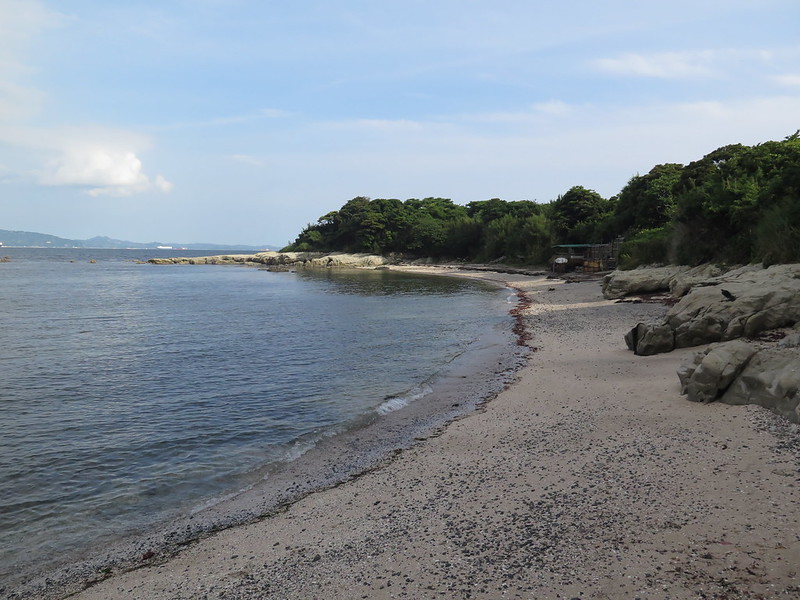 The beach stretched on for thirty or so minutes at a slow meandering walk. We got tired of carrying the backpack so we left it near the entrance to the beach. Only in Japan. 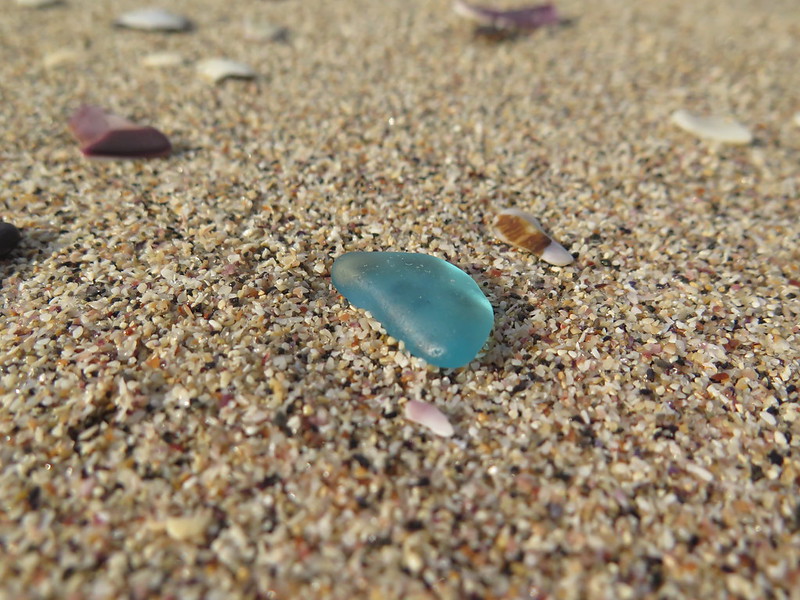 As we walked we collected more beach glass. 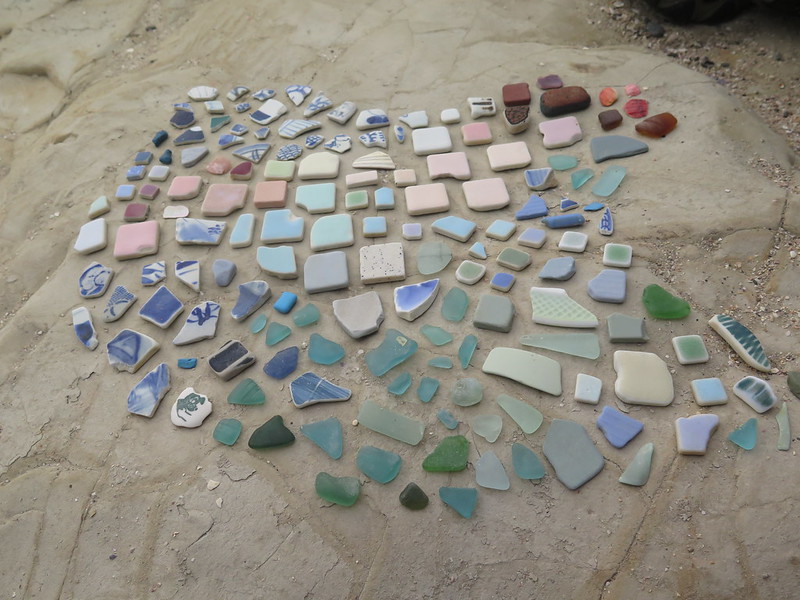 And had fun arranging it all at the end! Too near to sunset to really finish it though. And the tide was coming in to where we were working, if we’d left any sooner we would have had to wade out. The water was unfortunately too cold to swim in. 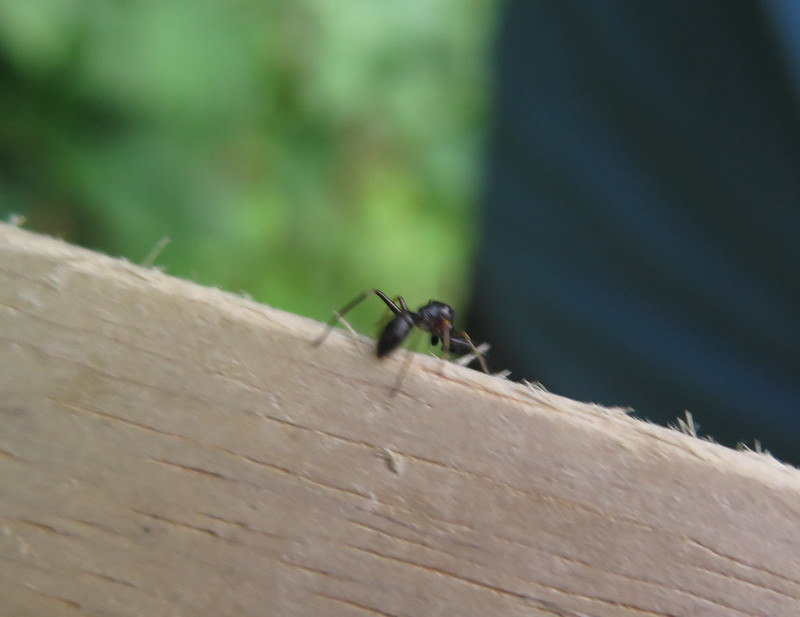 On the way back we saw a very cool insect, one of Natalie’s favorites. I thought it was an ant. 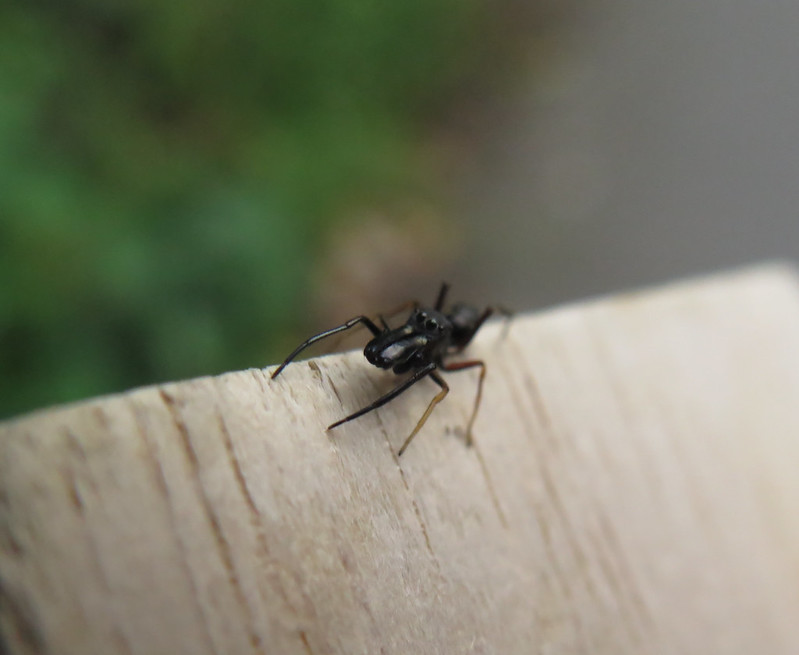 But it was not an ant! It was our old friend the jumping spider, disguised as an ant. If you look closely you can see the differently colored legs and the tapered body. At even a pretty close distance it fooled me, and apparently it does well enough to fool ants. An amazing creature! 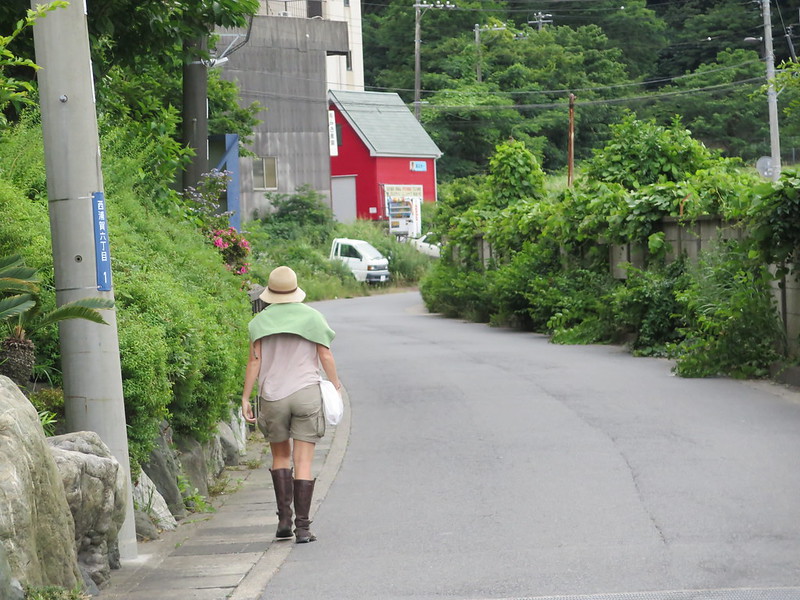 Our walk back down the side-road from the beach to the main road where we would wait for a bus. 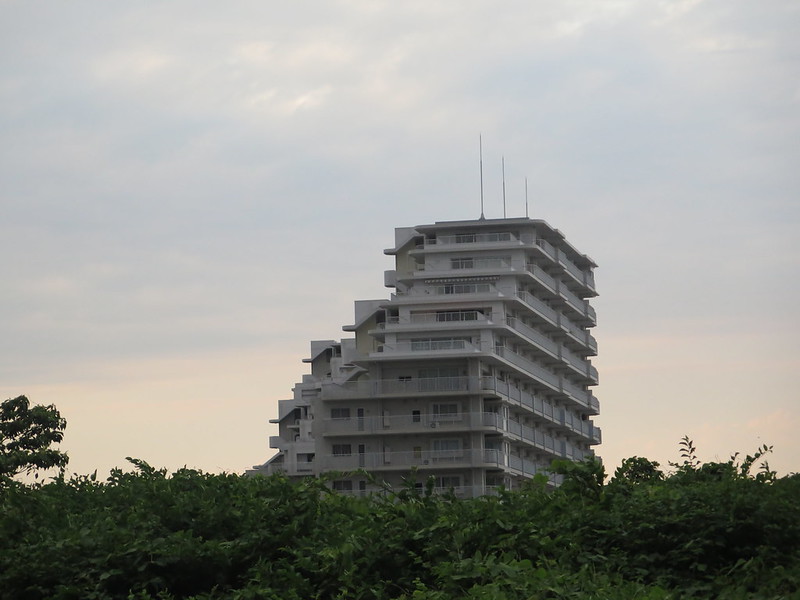 A hotel at dusk. It was one of the few large buildings in the area. 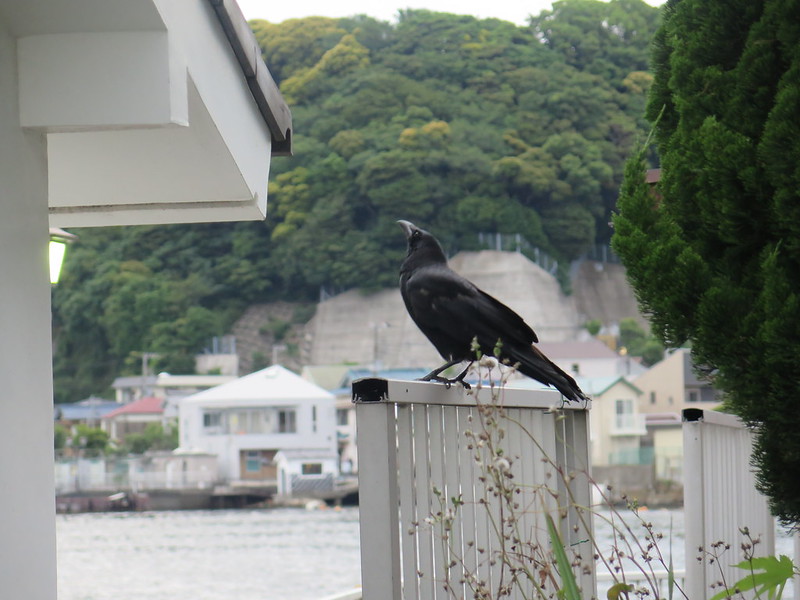 As we waited to go home a raven started hopping between some nearby buildings.

It’s definitely a day’s excursion from Tokyo to go to the seaside, and to get to swim you have to go even further. One of the major downsides of living in a sprawling megacity is that all the land nearby must be specially preserved or else it will be put to use serving that city and its residents. Japan solves the problem of getting people out of the city through its amazingly ontime and superfast rail system, which we explore next!