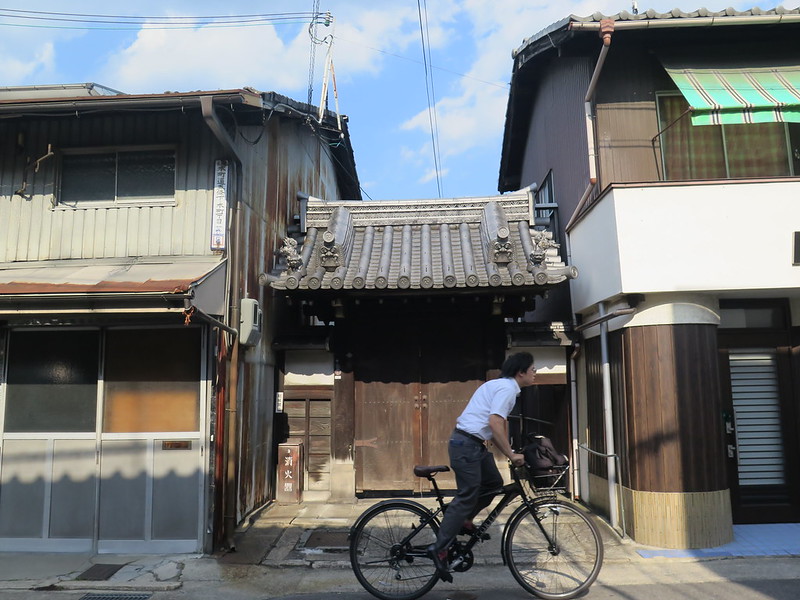 Every country, or sometimes even state, seems to have two cities locked in a particular relationship. The first city is sometimes the larger, it is a working city, a city that gets things done, where tourists are unexpected and the facilities for tourism are relatively underbuilt. The second city is the city everyone recommends you go to when you say you’re going to visit that country. There’s Moscow to Saint Petersburg, there’s Jakarta to Yogyakarta, there’s Warsaw to Krakow. If Japan could be said to have two cities in this relationship, it would be Tokyo to Kyoto. Tokyo is the bustling megacity powerhouse to the more laid back, quieter, and tourist friendly Kyoto. For them though, it’s a bit of a stretch. Yes, Kyoto is a tad more tourist friendly, but the difference is not in how ready either city is to accept tourists, but rather the experiences it has to offer. 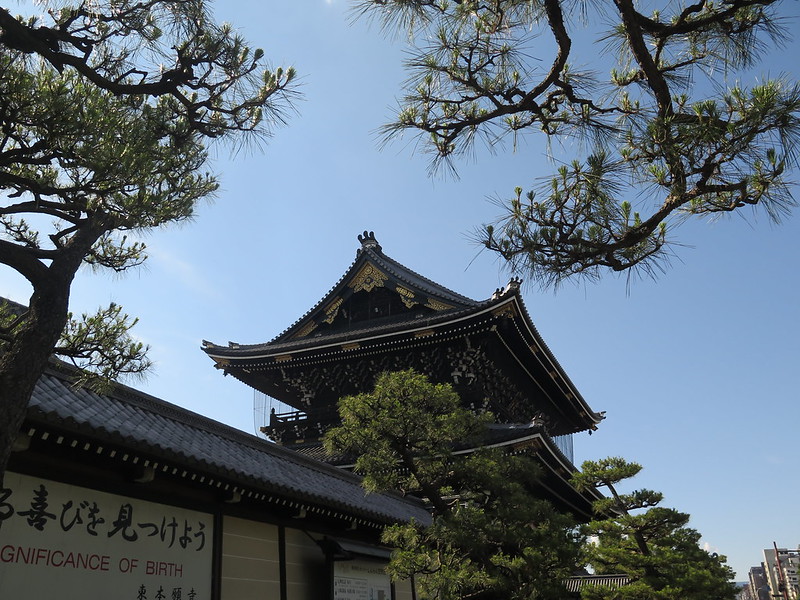 In answer to Tokyo’s seemingly endless shops and malls and eateries, Kyoto has temples. It also has shopping and a huge central mall and wonderful food, but really it has temples. The internet seems to agree on just about two thousand all together, 1600 Buddhist temples and 400 Shinto shrines according to Wikipedia. We visited not nearly that many, but they are everywhere, big ones taking up entire streets, smaller ones tucked away in between houses. A big reason for such a plethora of shrines and temples is that the city of Kyoto, former capital in all the glory and grandeur that that entailed, was mostly spared from harm during WWII. Kyoto was spared the firebombing that engulfed Tokyo and was removed from the nuclear target list by a general who went on his honeymoon there. By luck and circumstance, Kyoto is around now in its beautifully preserved historic state, grand temples and charming alleys alike. 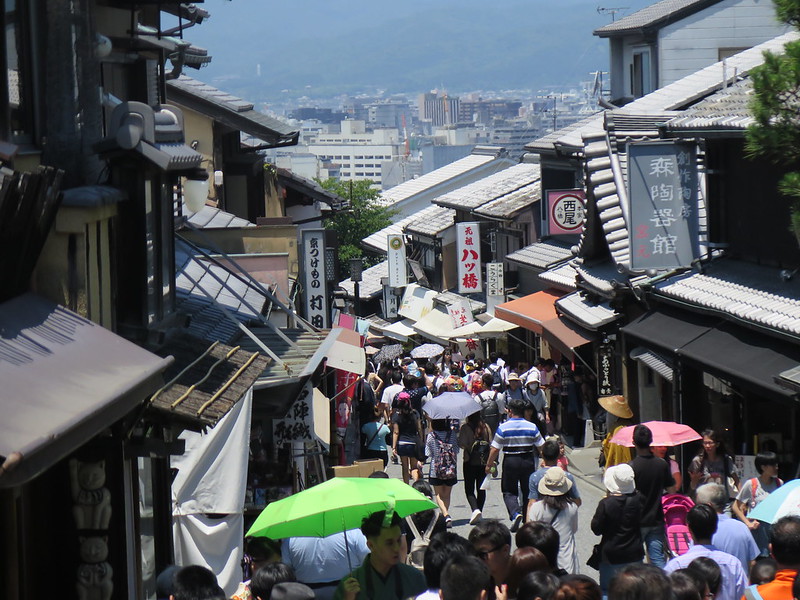 While the temples are the main attraction, I loved Kyoto for its own charm, shrines aside. Especially compared to Tokyo, Kyoto feels much more intimate. Despite its size it feels like a city you can actually know, a far more approachable density and pallet than the unending districts and zones of the current capital. Its streets are small and charming, traditional wood buildings being highly valued and well preserved. The aesthetic is very strong – outside of the downtown buildings taller than three stories are rare, lanterns are common, and structures bunch together, their multiple awnings creating a varied and continued cascade of wood and color. 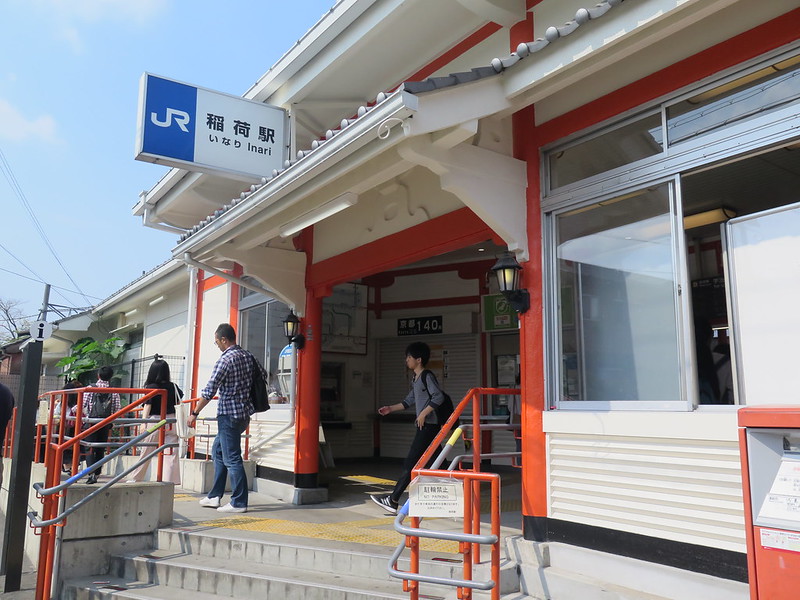 Like the rest of Japan, rail and bus are highly connected and readily available. The JR company does not have as many lines in Kyoto as in Tokyo, which made our JR passes less useful, but there were enough to get around. Bicycle and scooter are also common forms of transit, not only through the narrow streets of the residential areas but also in the down town. There seemed to be far less traffic when we walked through the city center, the streets were wide and open. 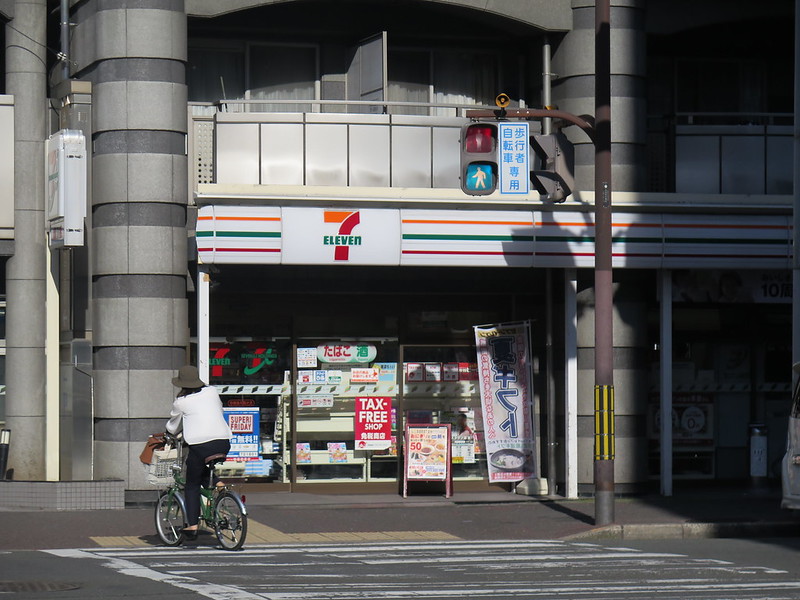 On our first day, we walked from the central rail station to the city shopping complex. Even this multiple-block spanning mall was in the style of old, covered but with narrow walks crossing larger promenades, wood and paper walls abundant. 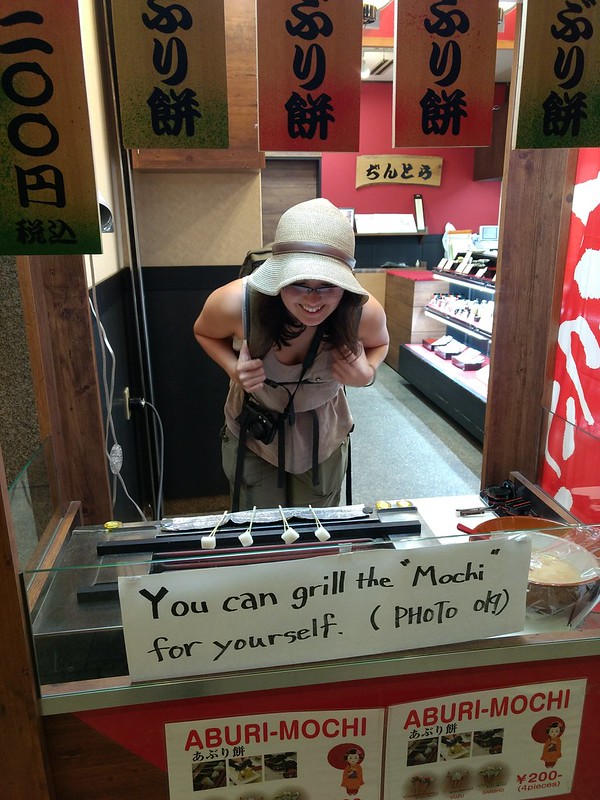 It turned out we were hungry and walking through snack alley. The mochi called to me, but it wasn’t until we found a ‘pop-our-own’ mochi stand that we took the plunge. Over the course of ten minutes we watched the mochi expand and puff open like popcorn. It took much less time to eat them – they were very good. 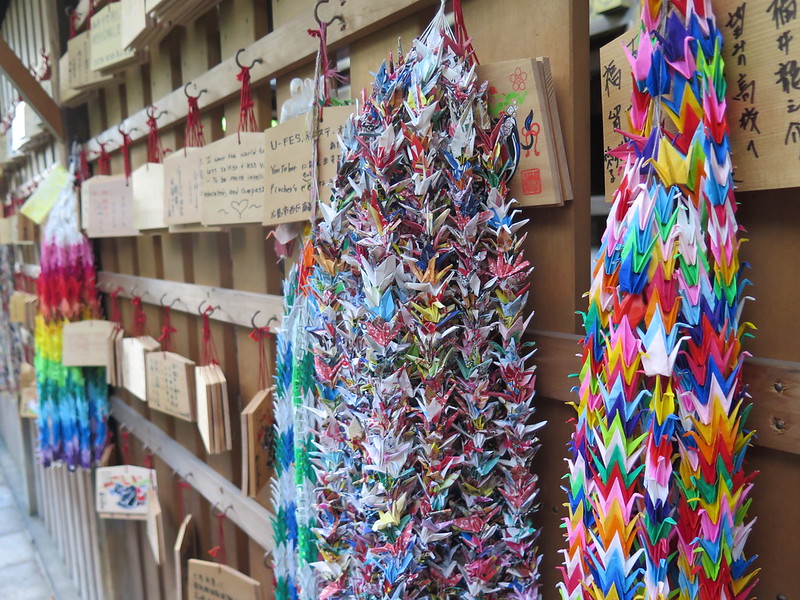 Inside the mall area were several temples, the largest of which greeted us with sake barrels and lanterns on the outside, and this amazingly vibrant display on the inside. This was new to me, but it turns out to be fairly common – people make tons of origami cranes or flowers and string them in massive bundles, usually for some wish or to express a strong desire or emotion. They hang them in temples as an offering, and the theory being that the larger the bundle, the more dedicated the asker is to the cause. This is pretty often done by students hoping to pass an important test or get into a good school. 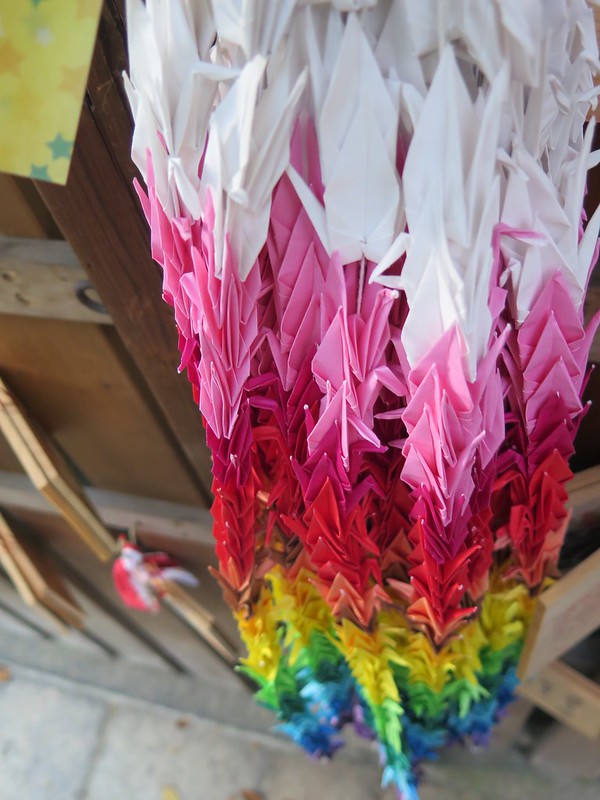 We, the onlookers, get to enjoy the beautiful display of color. 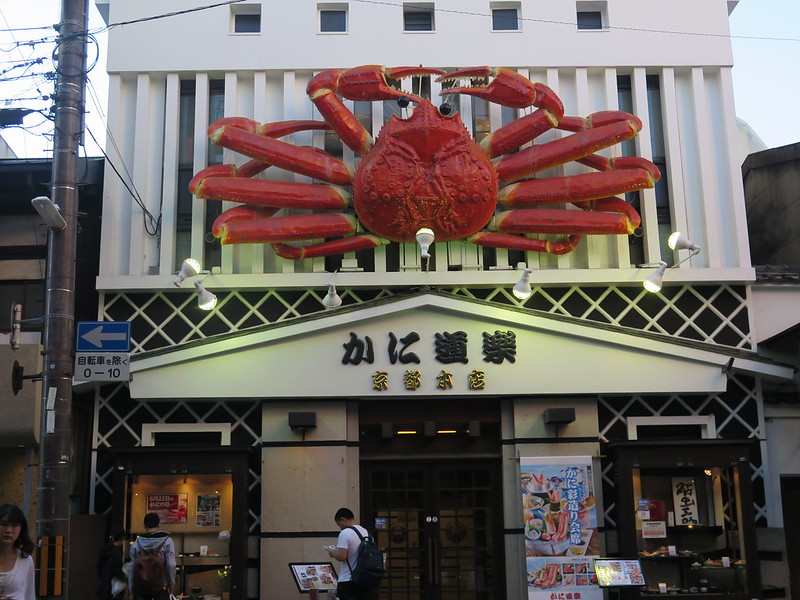 Outside we encountered a massive crab-mascot for a seafood restaurant. The claws on this behemoth moved up and down creating an interesting and slightly unnerving display. 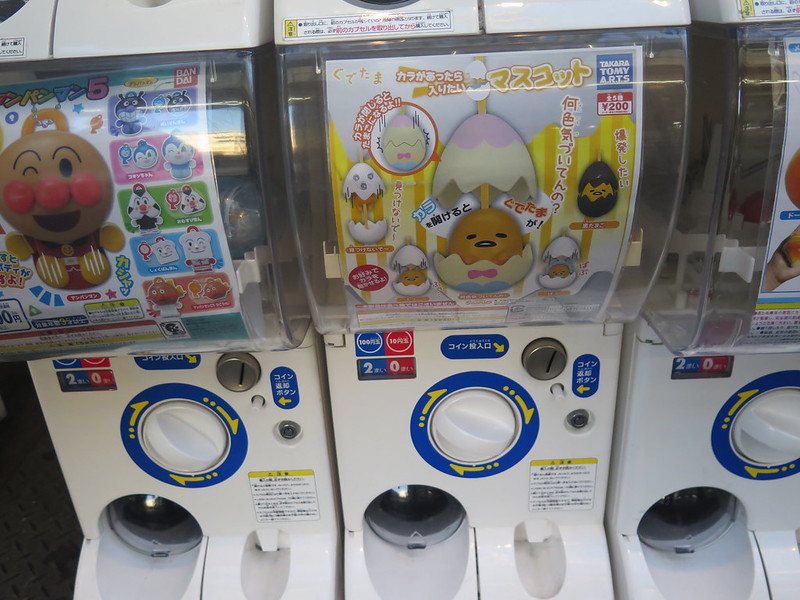 Nearby to the crab-shack was a series of gachapon machines, toys in a plastic ball served up for 100-200 yen, though some of them went as high as 500 yen. We couldn’t resist the Gudetama machine, but it was broken and we had to get our yen back from the person who ran the store. 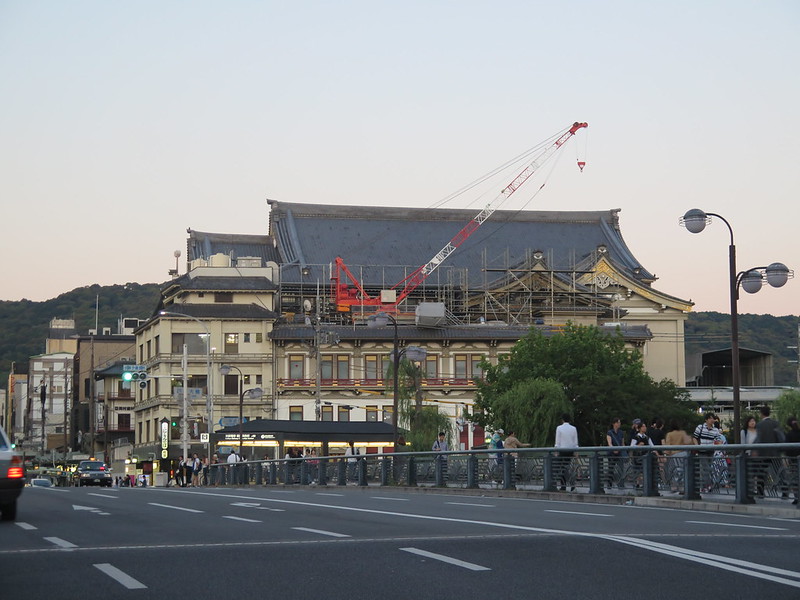 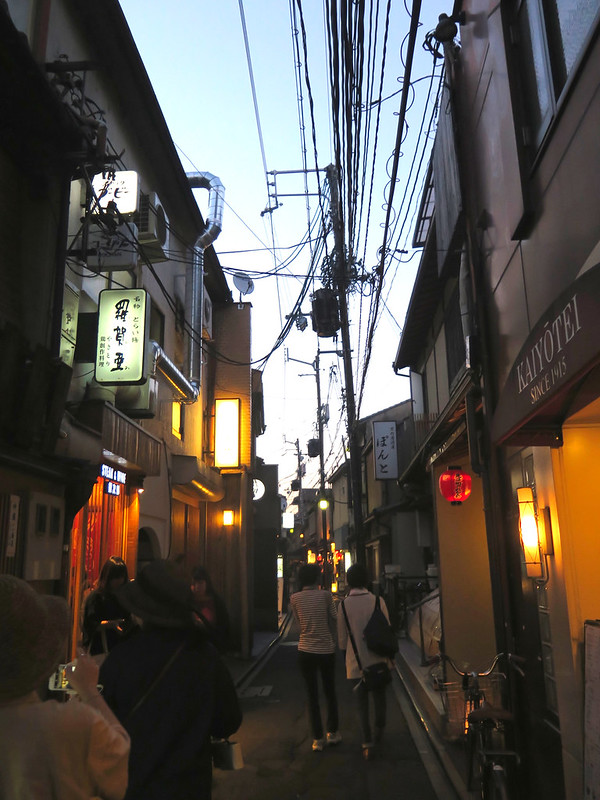 Night fell pretty soon after that, and we only got a brief glimpse of what might have been a major tourist stop, but we only saw the prices on the menus and moved on. It was charming beyond belief though, lanterns a glow and tiny restaurants crowded into a small alley. 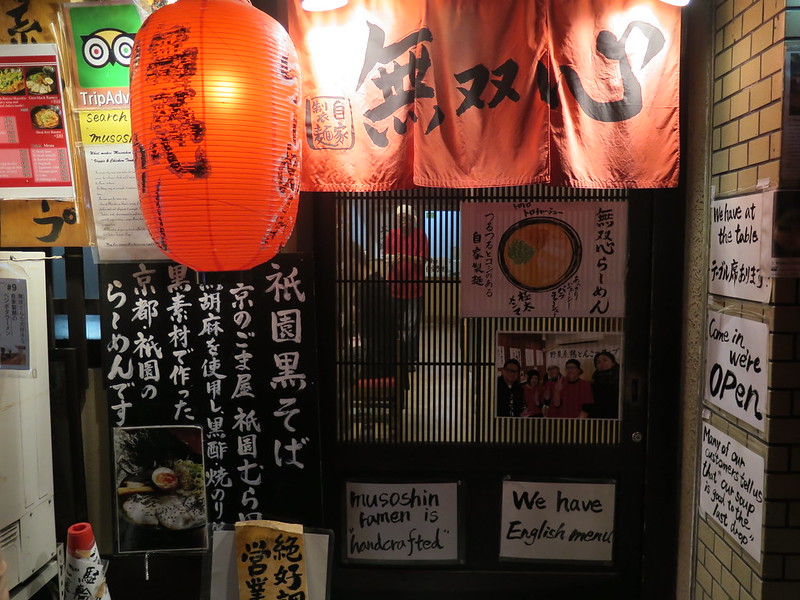 For dinner we chose an equally charming ramen shop, a bit closer to our hostel and further out from the central shopping area. Their specialty is ramen served with black sesame broth. Its taste compares with regular ramen the same way a plain bagel compares to a sesame seed bagel. The sesame adds a deep nutty undertone to the mix along with a bit of sweetness. The restaurant’s name is Musoshin and we can highly recommend it. 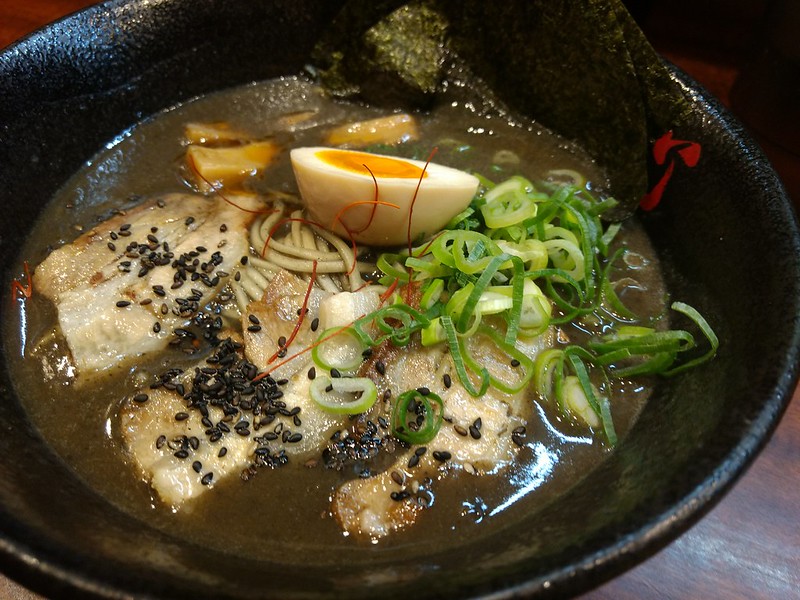