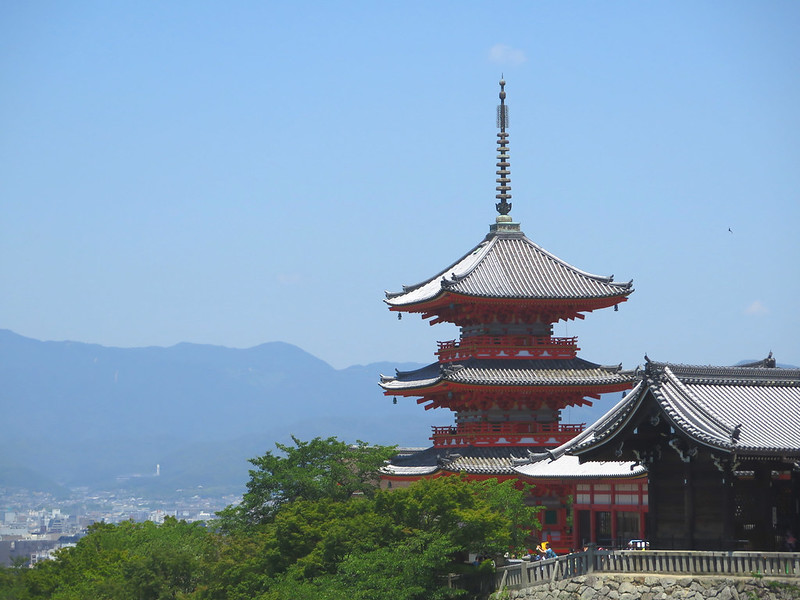 Kiyomizu is a Buddhist temple in the east of Kyoto, nestled in the mountain range that juts into the city. Since it’s in the mountain slopes there’s a bit of a climb to get into the temple proper. That street is full of slightly overpriced souvenir shops and fairly steep but it has a nice view of the city. 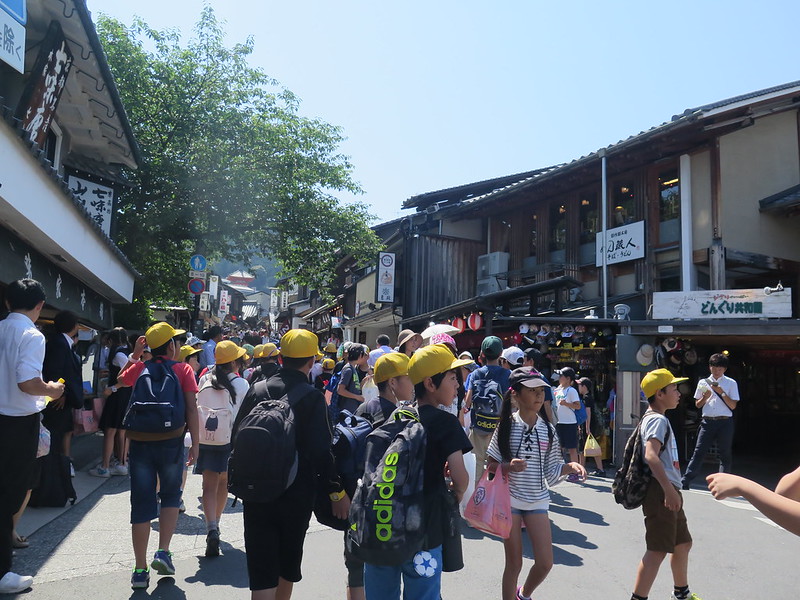 Though we were there on a Thursday the temple was packed. It’s a very popular tourist attraction and a highly visited holy site. It would be better to get there early – less heat and less crowds. Visiting the temple seems to be a common school trip and we saw several student groups led by slightly exasperated teachers. 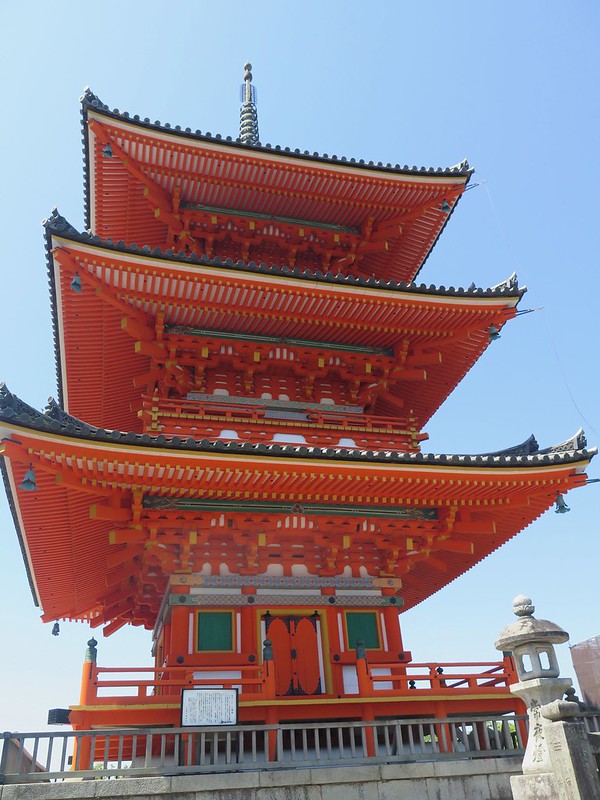 The temple buildings are amazing. The bright sun and close viewing distance really makes the iconic multi-tiered temples in all of their gloriously vivid red stand pop out from the rest of the scenery. It’s almost impossible to not stare up at their impressive height and finely crafted ornamentation. 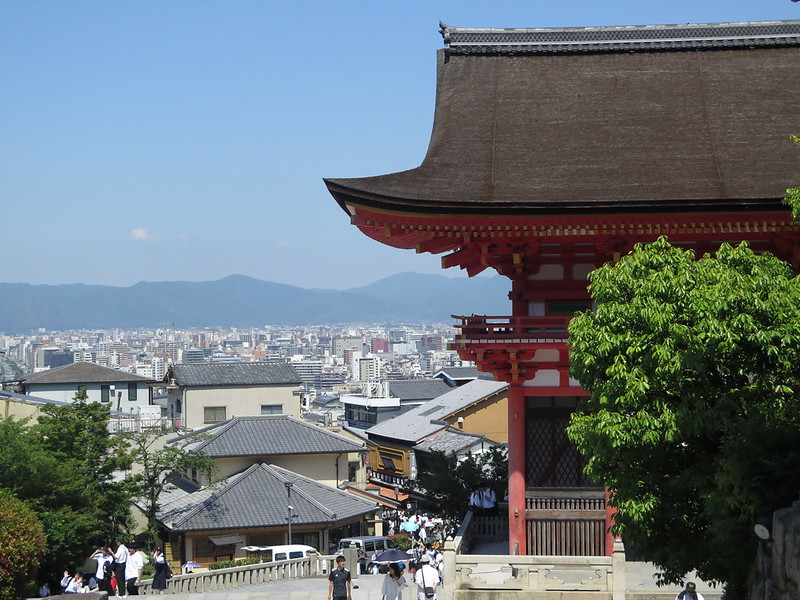 This temple is known for its large open terrace supported by extremely tall wooden poles, but unfortunately this part of the temple was under reconstruction and covered with a cloth so it didn’t make for great pictures when we visited. The view of the city is quite nice though and is another one of the must-sees while you’re here. 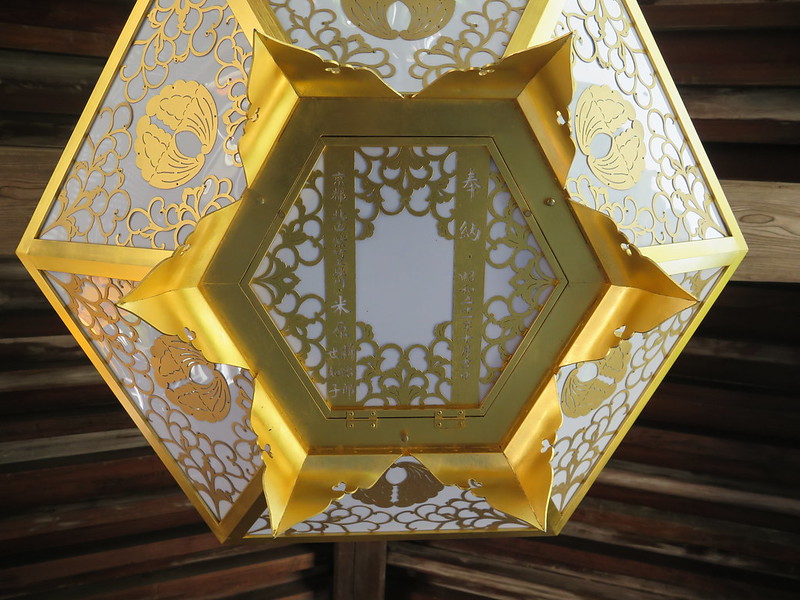 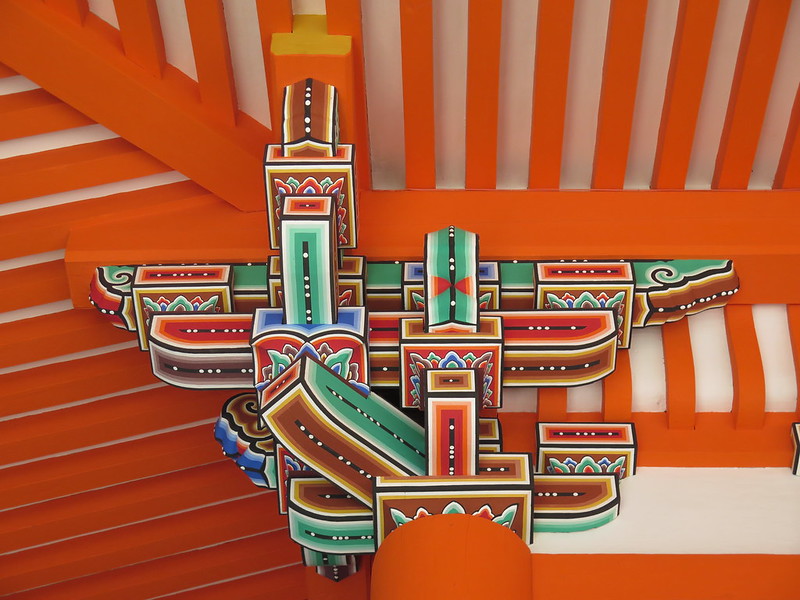 I particularly loved the bright, ornate details in the roof and corners of the buildings. I don’t imagine they’re paid too much attention by most of the visitors who are here for the view of the city and the activities of the temple, but I found the colors and carvings especially eye-catching. 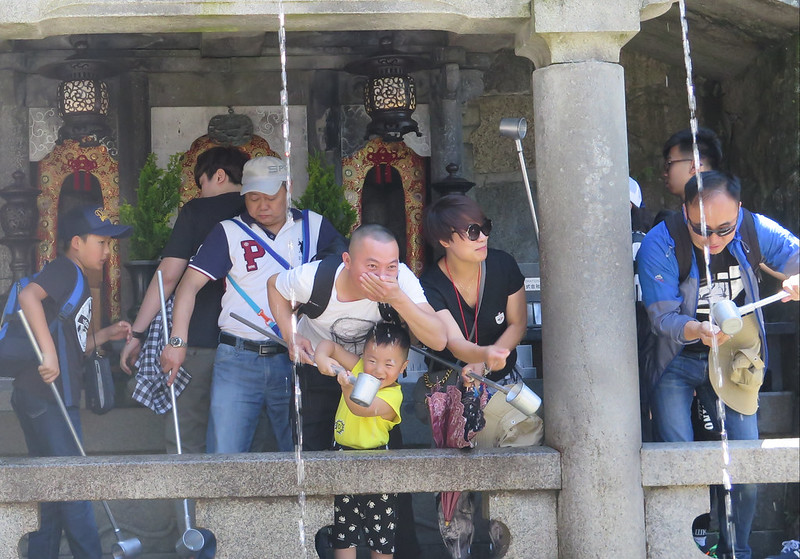 One of the must-do rituals, which we didn’t do due to the very long line, is to drink from the naturally running water in the center of the temple complex. Metal cups on long poles are provided to snatch the water as it falls, and washing your face and drinking it is said to be a cleansing experience. I was a bit worried about germs, but it turns out the water is sanitized with UV light before it reaches the edge of the fountain. 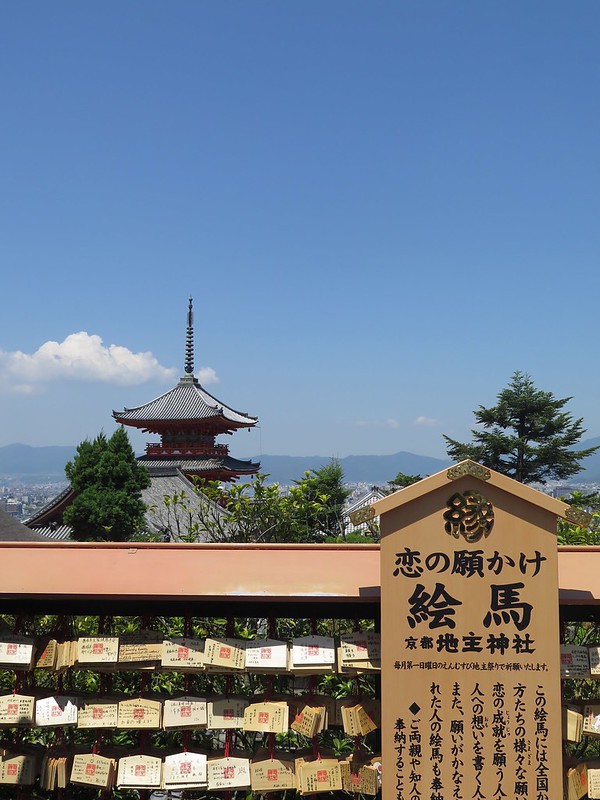 At the very top of the temple complex is a small garden featuring several devotional activities. In some areas you can leave offerings and written wishes, in others you pray to various gods, and in the middle you can try to move between two far-apart rocks with your eyes closed. If you reach the other rock, it is said you will find true love. 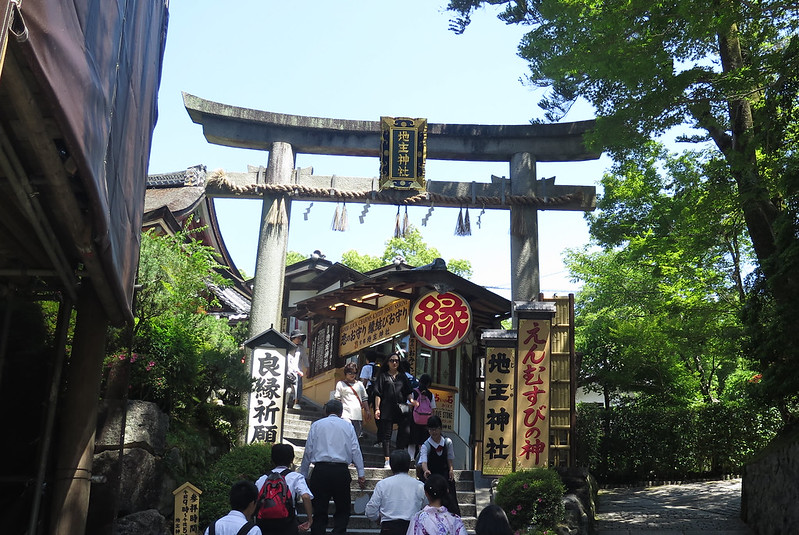 While you’re there you might notice that some of the rocks and trees have large white or brown cords around them. These are yorishiro – sacred objects that can house spirits, or kami, giving them a physical space to occupy. They are demarcated by the cord as holy and are used in festivals and prayers. While this is a Shinto tradition, it seems to be found in Buddhist Temples as well. 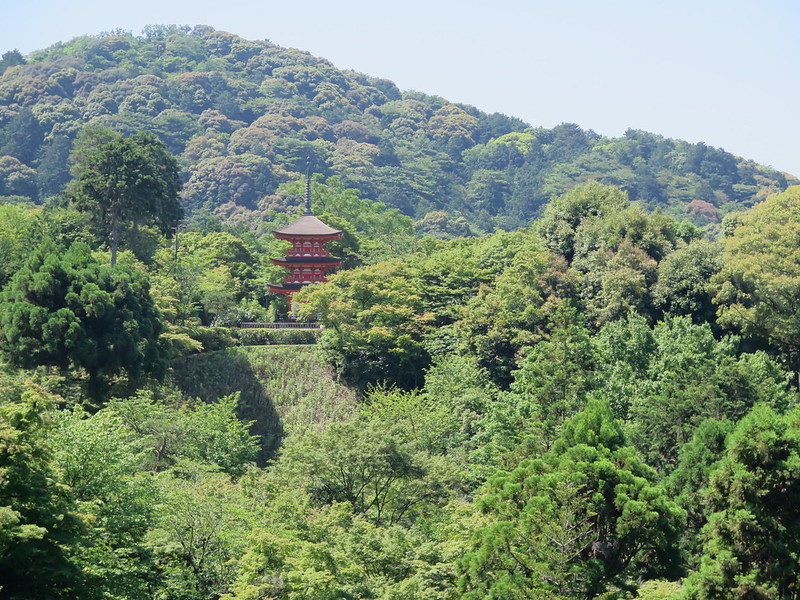 Down the back of the temple and all around it are the lush, tree covered hills. There’s a lovely walking trail that loops around and back, an opportunity for sun-dappled meditation. 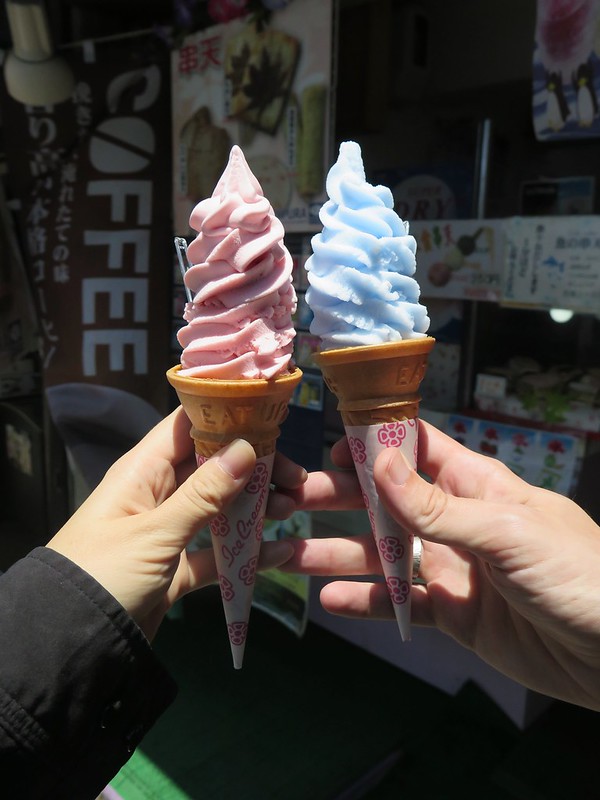 Our day was especially sunny and hot, and on the way down we got an ice cream treat – ramune and cherry blossom!

Bonus temple! After lunch we decided to try and catch a temple cleansing ceremony going on at Chishaku-in, a Buddhist temple a bit to the south. It’s famous for its beautifully painted sliding walls and meditation garden. Otherwise, it’s not really on the tourist-trail of the more famous temples. 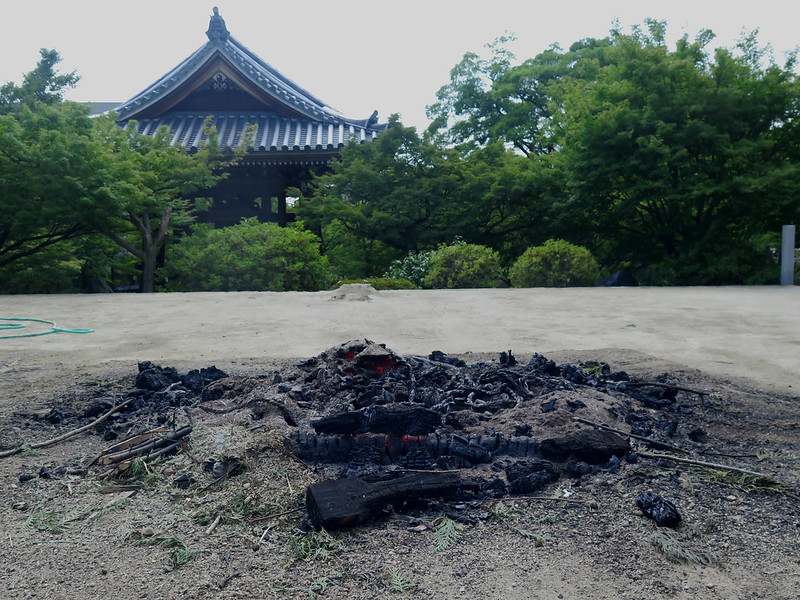 We arrived too late to see the purification ceremony, which featured a pyre and chanting to cleanse and renew the temple. 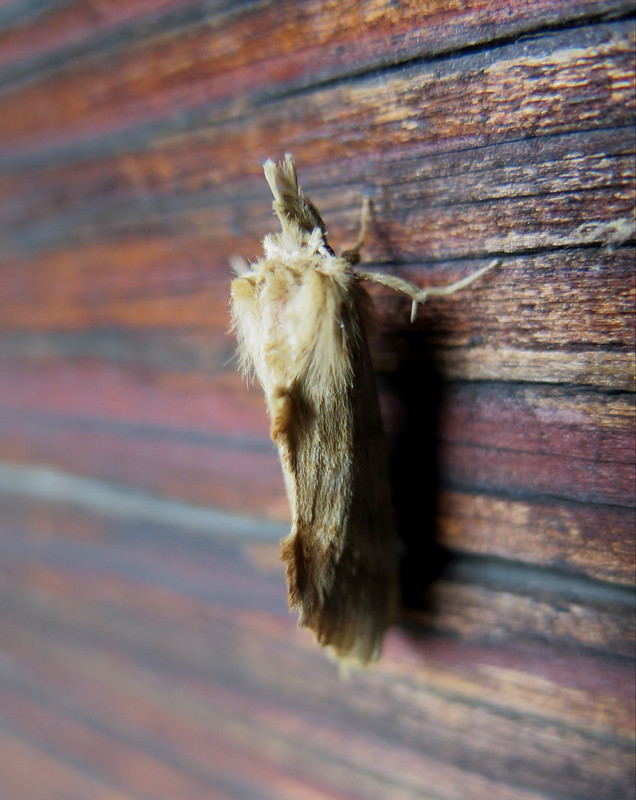 We did get to see this amazing moth though. And on the upside, the temple was not at all crowded. 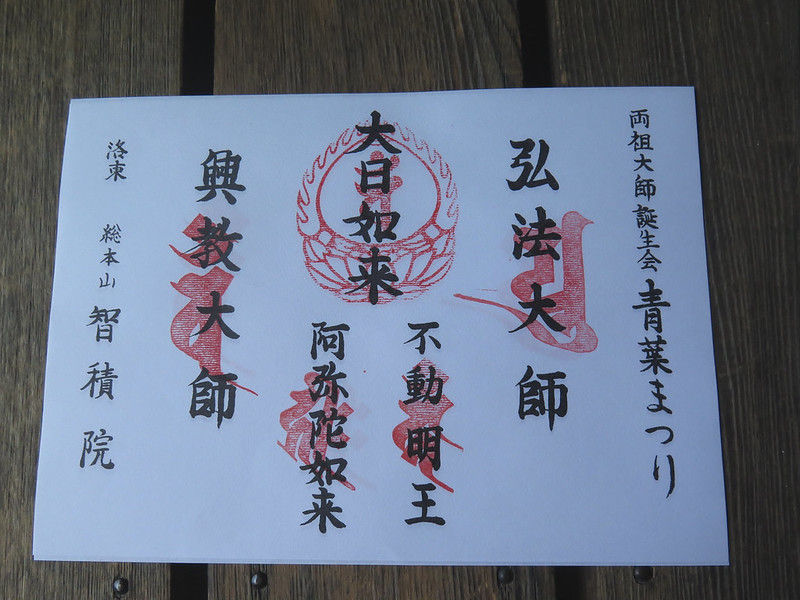 And of all things, the temple had a stamp collection activity! Stamps are everywhere in Japan, people just love collecting them. The idea was to visit each of the main buildings in the temple where a monk would carefully and precisely place a stamp on your sheet. The more important the building, the bigger the stamp is what I gleaned from this, understanding no Japanese. At the end, if you collected all the stamps, you got a small pouch to put the paper in, though we didn’t really want to fold ours up. If you bought a temple charm – a way of giving donations in exchange for a good luck token – you also got a raffle ticket to win a prize, featuring such disparate things as : children’s toys, packets of curry paste, candy, and household cleaning supplies. Raffles and small forms of gambling are very popular everywhere in Japanese culture, apparently even at temples. 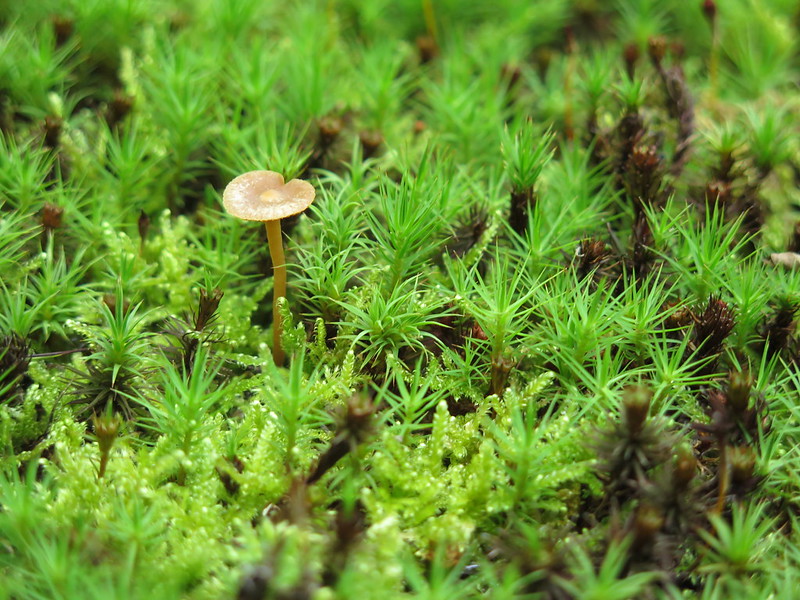