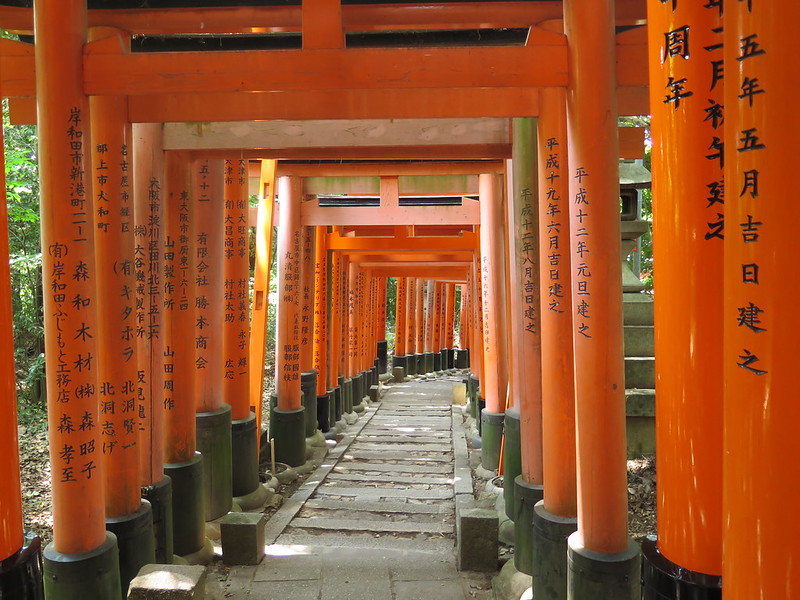 Fushimi Inari is probably Kyoto’s most famous temple, at least judging by the crowds on an off day and the number of pictures of the shrine’s tunnel of torii gates there are online. The major portion of the shrine, the large temples and the densest torii gate tunnels are nestled in the base of a mountain named Inari – the god of rice and business. Outside of that cluster, the shrine has over four kilometers of trails leading up into the mountains and towards hundreds of smaller shrines. It takes about two hours to walk all the way up, but there are plenty small caretaker/teashop shops which will sell you water, snacks, and religious supplies. 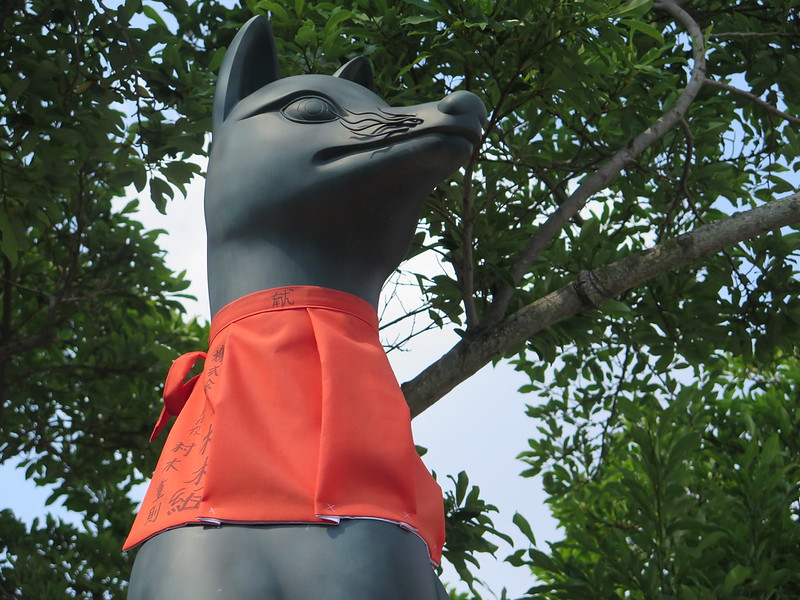 One of the symbols of this temple is the fox. They’re everywhere around the grounds and up into the mountain, as statues, paintings, and carvings. The shrine sells fox-luck charms, and if you want to make a wish, you get to draw one one of these : 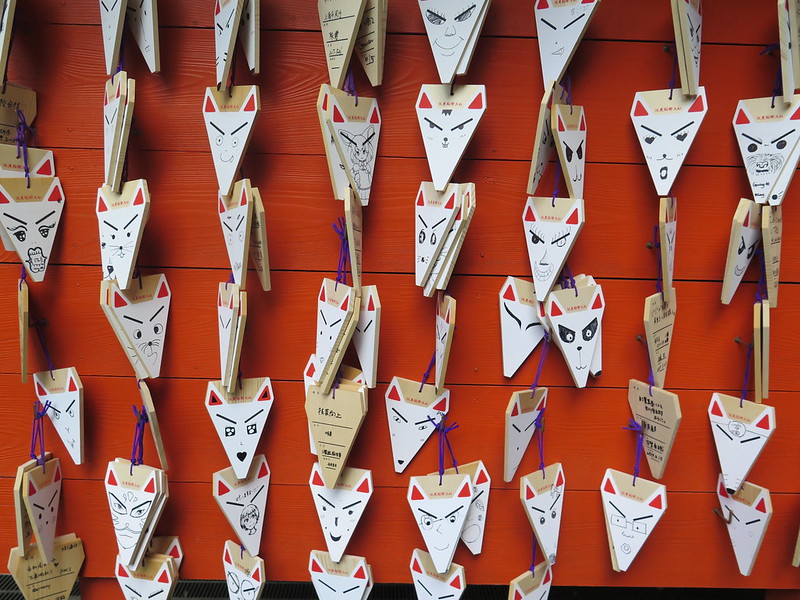 Alongside the more traditional house-shaped board you can buy and decorate a fox head. One side gets an often funny face, and on the other side is your prayer. 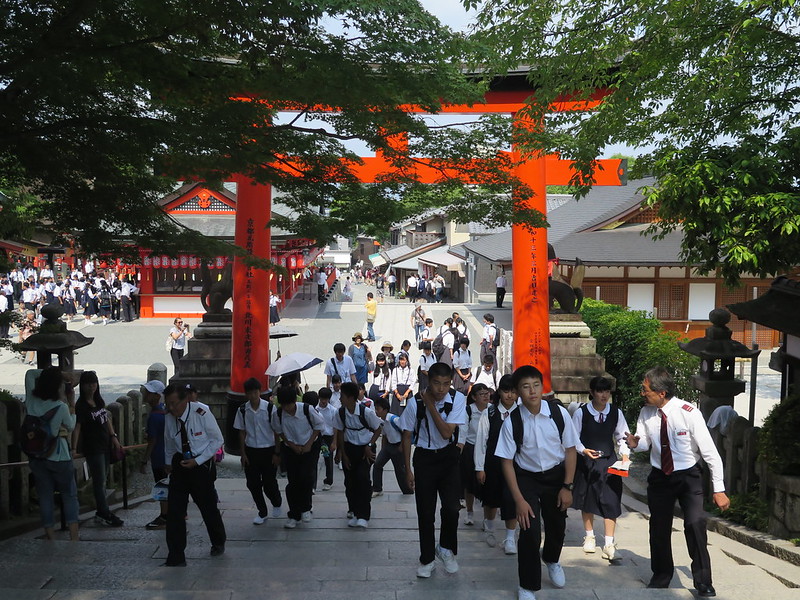 This temple gets so many visitors each day, it’s hard to believe. We went specifically on an off day, kind of early. Nope. It’s popular with tourists, locals, school groups, selfie-takers, well wishers, people getting married, people praying for good luck and health, pretty much everyone makes their way here sooner or later. 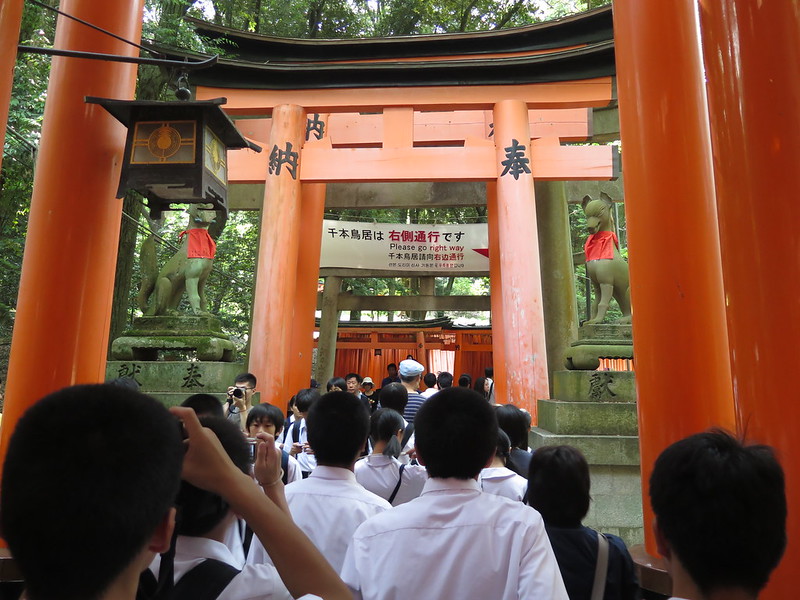 If you were hoping for an easy clean picture of the gates, you have to come in maybe absurdly early? Or when there’s a sports match going on that day? I don’t know. We got our best shots farther away from central area of the temple and far, far away from the famous there-and-back loop of gates. It’s very, very crowded in there, almost to the point of not being able to move. 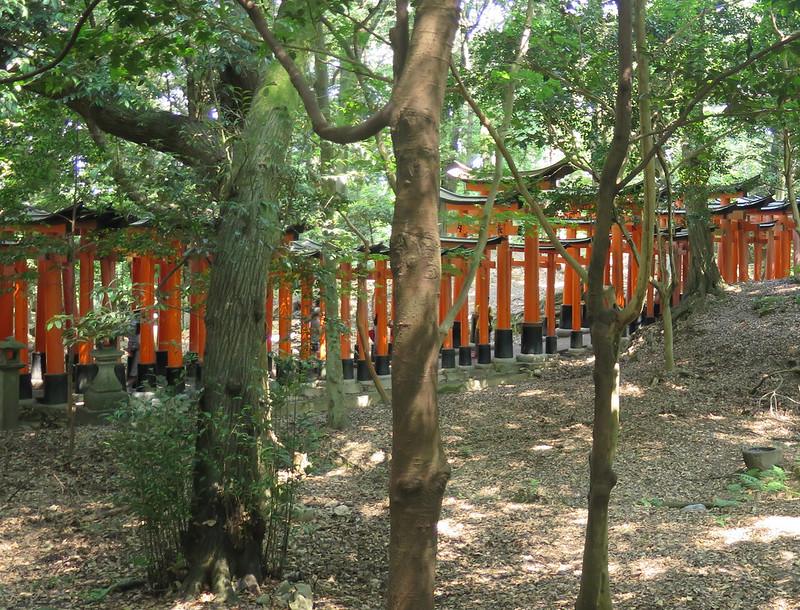 Once you get away from the crowds though, the park-within-the-temple is really a gorgeous place to be. There are shaded trails that run across and around the main torii-gate trail, and lots of little temple offshoots to either side. The trail within the shrine is well shaded and built to blend in with the surrounding nature very well, often we didn’t feel like we were in a maintained area at all. The temple’s trail actually connects with a larger trail, the Kyoto Isshu trail, which encircles the northern half of the city. It’s very important to pay attention to which way your trail is going, and to look for the signs to various waypoints, because in certain areas the trails criss-cross haphazardly and it’s easy to go somewhere you weren’t intending. 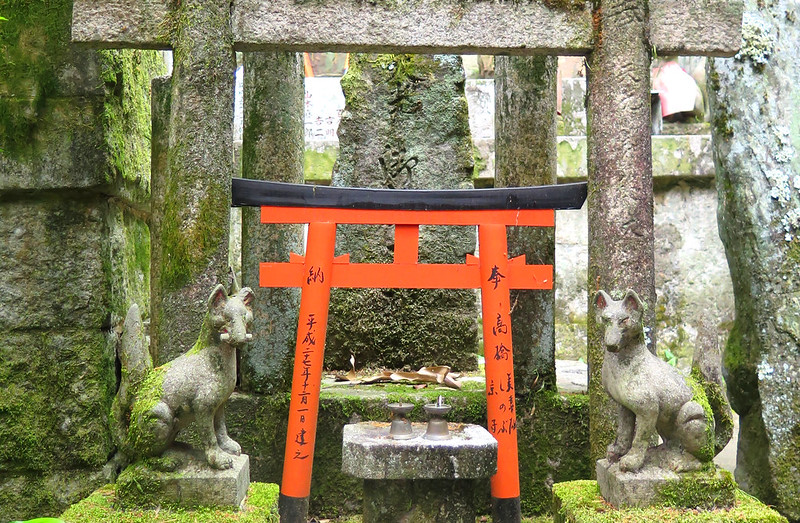 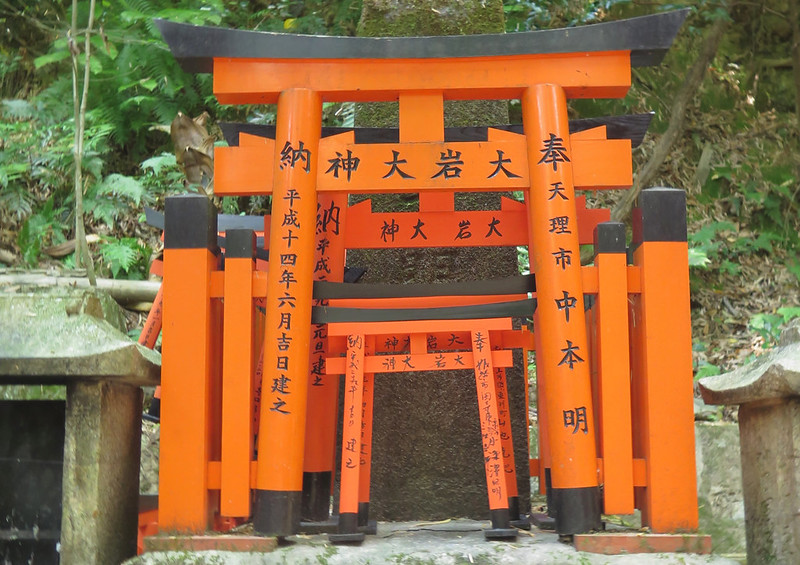 Here are two examples of the small altars – the first has two fox guardians, and the second has a pile of miniature torii gates, a sign of devotion. 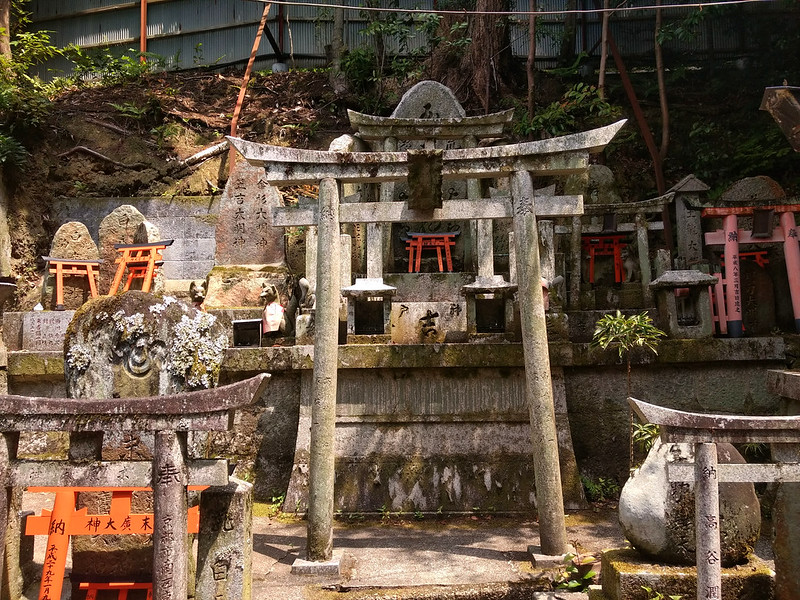 Generally these smaller altars are housed within little shrine subdivisions – I’m not sure if each of the several altars within a smaller shrine are devoted to a separate deity or family, or if the whole shrine is towards one cause. 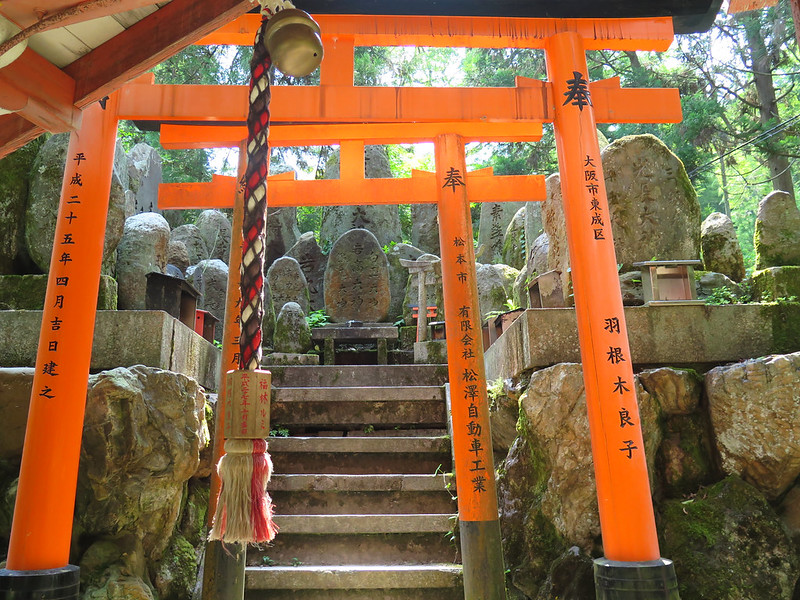 Some of the larger, more ornate shrines have their own large red gate at the entrance. The larger the gate, the more devotion, and the redder, the newer. Some of the shrines are family shrines that receive a lot of attention as their family flourishes, others are still well maintained but significantly older and not as recently renewed. 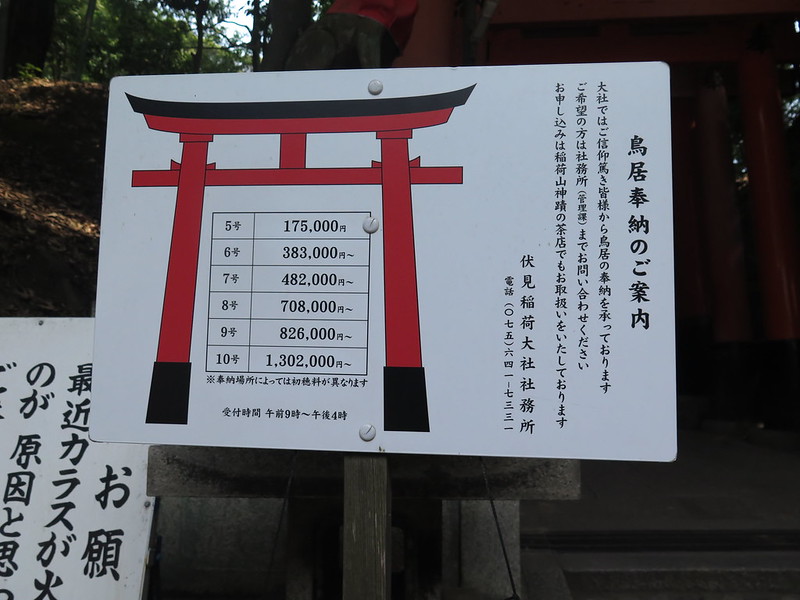 If you’re wondering what it takes to build a torii gate in your name on the trail, here’s the price list. As with most things related to religion and money, this isn’t a bribe but a sign of devotion – the money goes to maintaining the temple and is considered an offering to the gods. 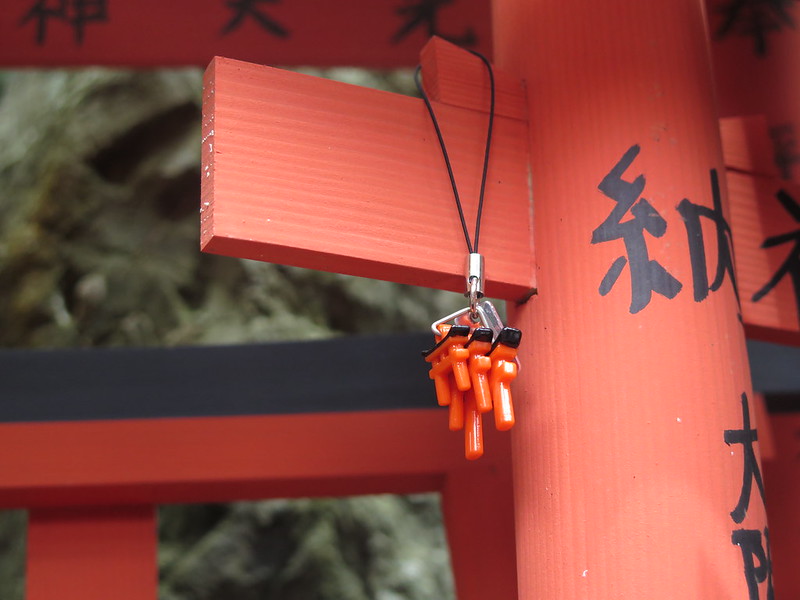 For those of us less fortunate or devoted, some of the shrines sell tiny torii gate charms for luck and protection. 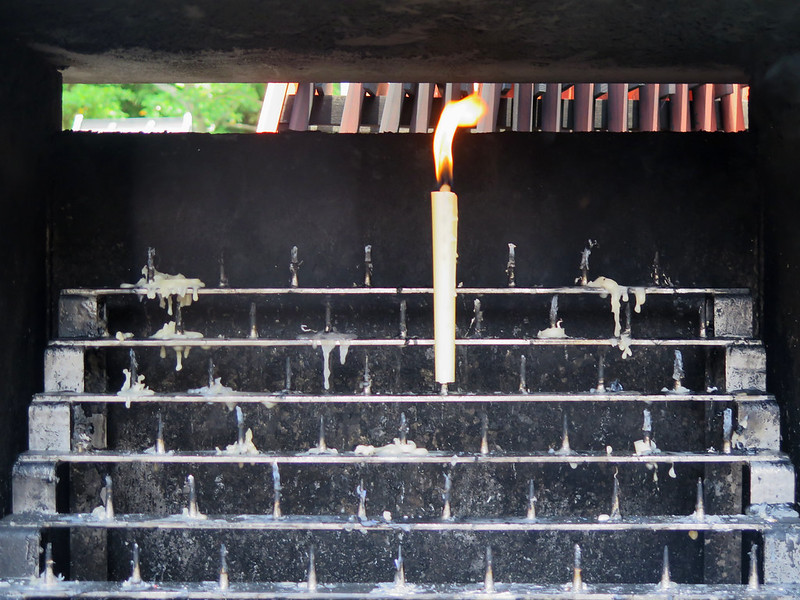 If you climb all the way to the top you get a lovely, somewhat challenging hike, and a great view of the city down below. The torii gates are beautiful and vibrant, their long stretches forming mesmerizing tunnels of red timber, beckoning both creativity and meditation. 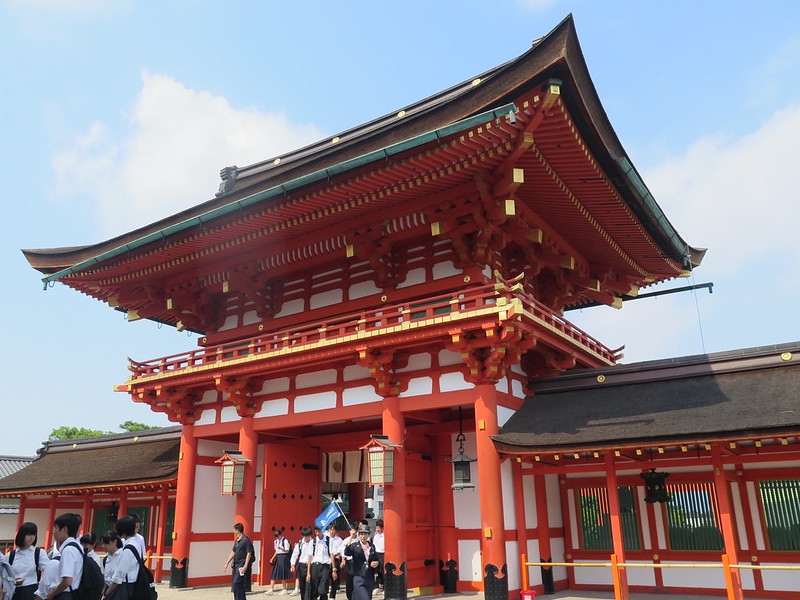