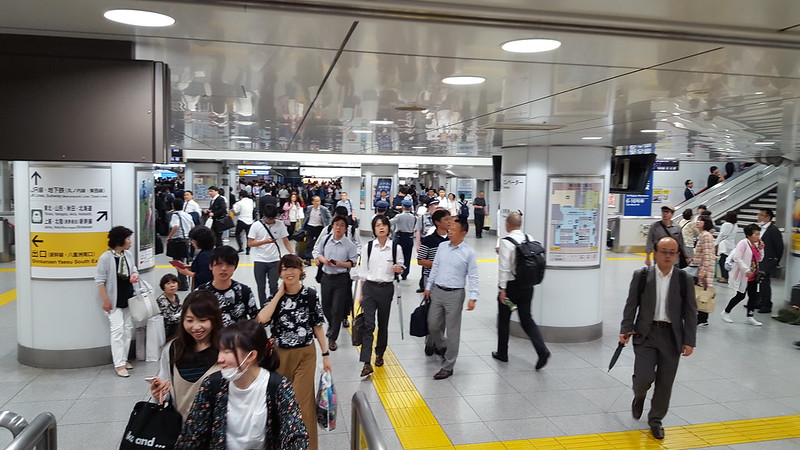 We were short on cash and time, so in one of the stations Stoytcho and I split up to handle two tasks: getting money from an ATM (my job) and buying us train tickets (Stoytcho’s job). I walked up to an ATM in the station and stuck my card in to find it flatly rejected, something not uncommon for foreigners in Japan. That would’ve been the end of it, had a pair of police officers passing by asked if I was alright. I can’t remember whether they asked me in English or Japanese, but I remember that I responded in Japanese with a simple, “I’m fine, it’s just that my credit card doesn’t work.” I guess they hadn’t expected me to respond in their language and there was a pause. Then one of the officers asked “Could you please show me your passport?” This is normally not a problem, except Stoytcho had the passports in the bag he was carrying. Oh no.

One of the major problems with my Japanese is that certain phrases I use frequently are beautifully fluent, but when someone asks me an out-of-the-ordinary question I find myself struggling to put together a sensible sentence. It must’ve been bizarre  (and mildly suspicious) to watch a person go from fluent-sounding to half-coherent as I explained “My friend…he took them with him in a backpack, he’s just over…” and I couldn’t remember around the corner. I dug frantically through my bag, hoping to find a photocopy of my passport. I had one, but when I showed it, the officer asked for the original. She wasn’t unfriendly, but she didn’t use the cute, peppy voice she first addressed me with.

Stoytcho rounded the corner at that moment, saving me from potentially being arrested or brought in for questioning or whatever they do with foreigners who don’t have their passports with them. When he came over, the officers nodded and looked at each other as if they suddenly believed my story – at 6’4” and blonde, Stoytcho gave my foreigner story a thousand more points in credibility. The officers hardly glanced at my passport once I dug it from his bag, and they didn’t even want to see Stoytcho’s passport. They just turned around and walked off.

Why exactly the above scenario happened is hard to say. We asked an American friend who now lives in Japan about it over dinner, and he said that once upon a time several years ago they had an ATM fraud incident, and since crime is rare in Japan it became a huge deal and now the police are ever vigilant for people hanging out near ATMs. But I’ve got my own idea. I spoke Japanese my first few Japanese sentences perhaps a little too well for how I look and got mistaken for a Nikkeijin, someone of Japanese descent from abroad. While I’m half Chinese, it’s hard to tell that I’m anything beyond half-Asian, so it wouldn’t be surprising. But that’s also risky; the Nikkeijin are mostly viewed with mistrust. They were invited back to Japan from abroad on special work visas in the 90’s to quell a labor shortage, but face discrimination from the native Japanese population and now comprise a large number of the unemployed. I’ve heard people associate them with trouble and crime. So it wouldn’t surprise me if the officers saw a half-Asian kid who spoke Japanese a little too well loitering near an ATM and thought there was a problem.