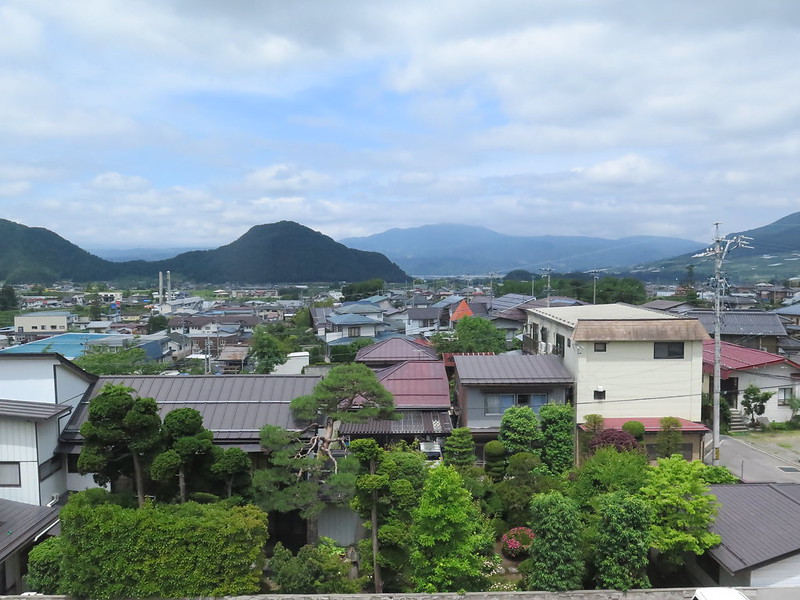 As one of our last stops in Japan we decided to spend a little more than usual and try out a traditional bathhouse-inn experience. We found a good deal online and with our JR pass made our way to the city of Nagano, then by local metro to the even smaller town of Yudanaka and finally, after a confusing nighttime walk around the town center, to the Ryokan Hotel Tsubakino. 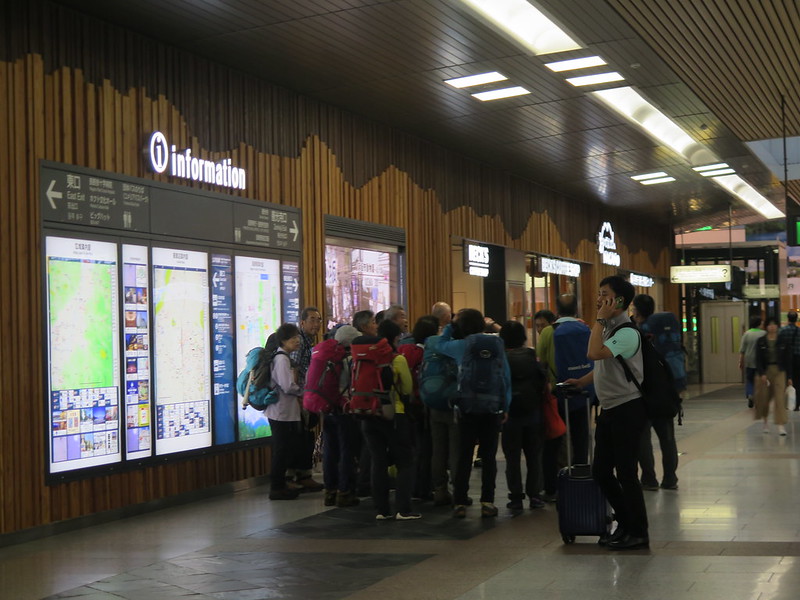 Before visiting Japan I’d had vague awareness of their bath culture, but only in the yes-they-have-nice-baths sense. It turns out to be so much more, and much more prevalent in society than I thought. 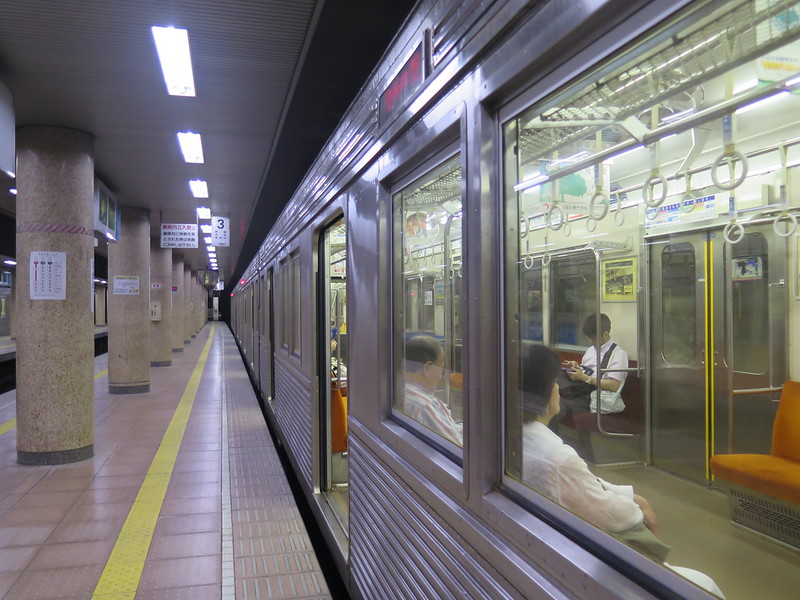 An onsen is a public bath. The entrance fee is a few dollars and you can stay for as long as you like. There’s one in nearly every town, usually one in every neighborhood. People go there to relax after work and on the weekends, even during the summer. In fact, they’re so prevalent one of the hotels we stayed at – a traveller’s hotel that was really intended for driving – had one available to guests. 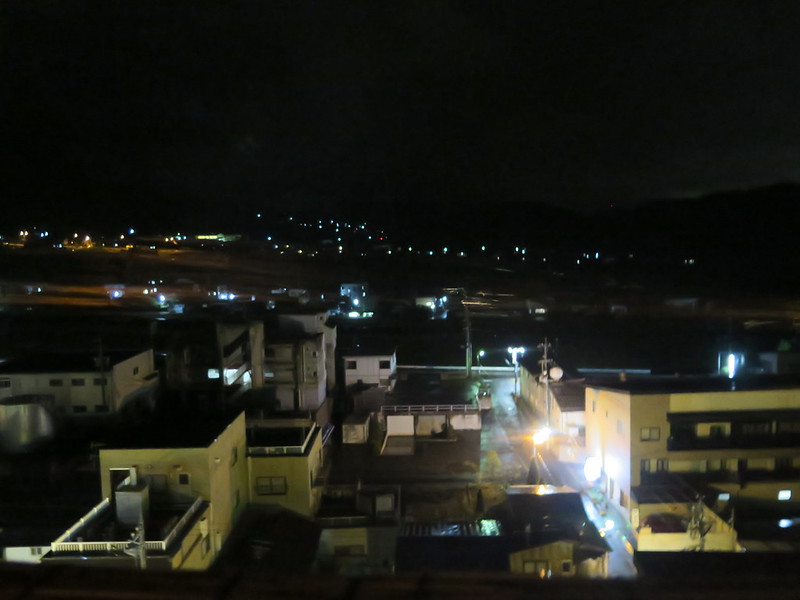 The idea of an onsen is that you shower off very thoroughly, sitting on a small stool and using a bucket to wash off. You then clean the stool and bucket and join the other patrons in the main attraction, a large hot pool. Often it will be an actual hotspring, or even be located outside. There you soak for as long as you like, then leave. 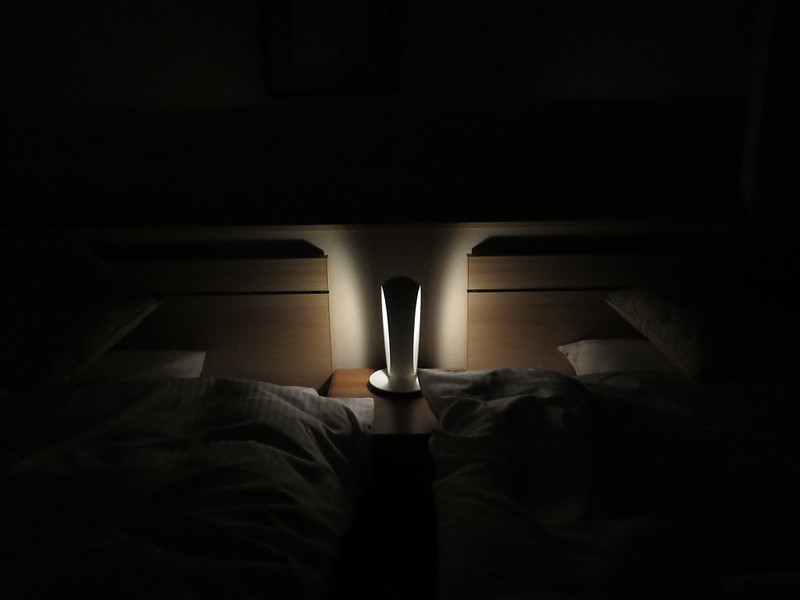 A ryokan is the onsen experience taken to a higher level of hospitality. The rooms are warm and comfortable, tatami mats lining the floor. Slippers are provided for indoor wear, along with a yukata – a traditional robe garment. 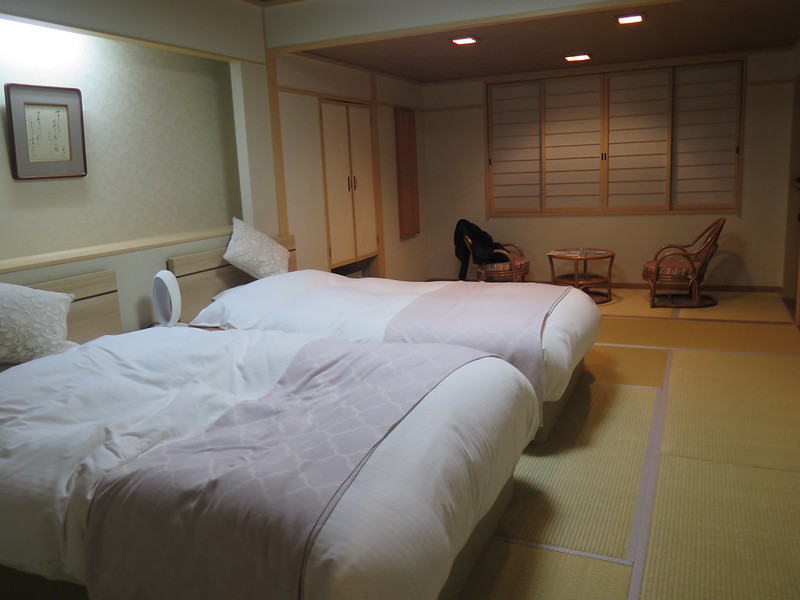 At our ryokan there was an option for a private bath on a balcony. Use of the public bath is included with the room, but we went for the fancier option. 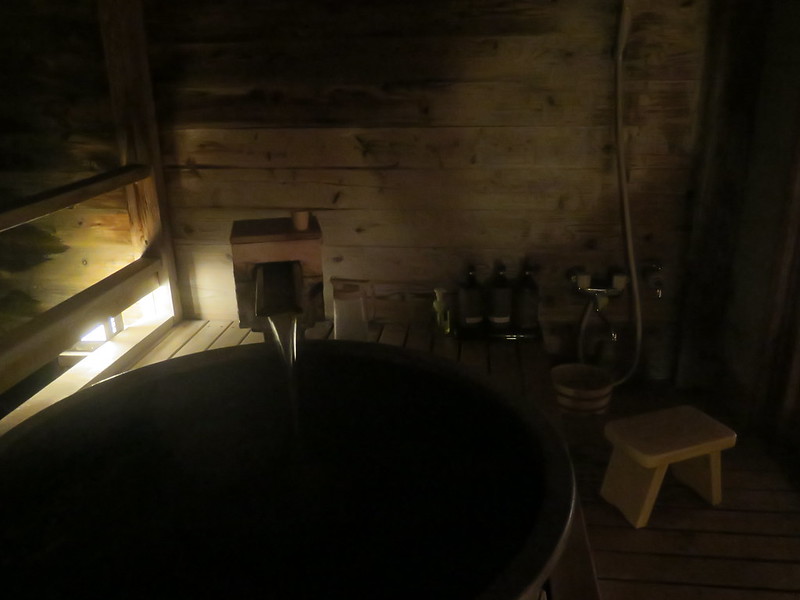 No regrets. It was a chilly night up in the mountains so we soaked and cooled alternately. In the picture you can see one of the tubs, the water spout feeding it, and the washing stool provided in the corner. Our camera is really not up to taking good pictures in the super-low light of the bath. 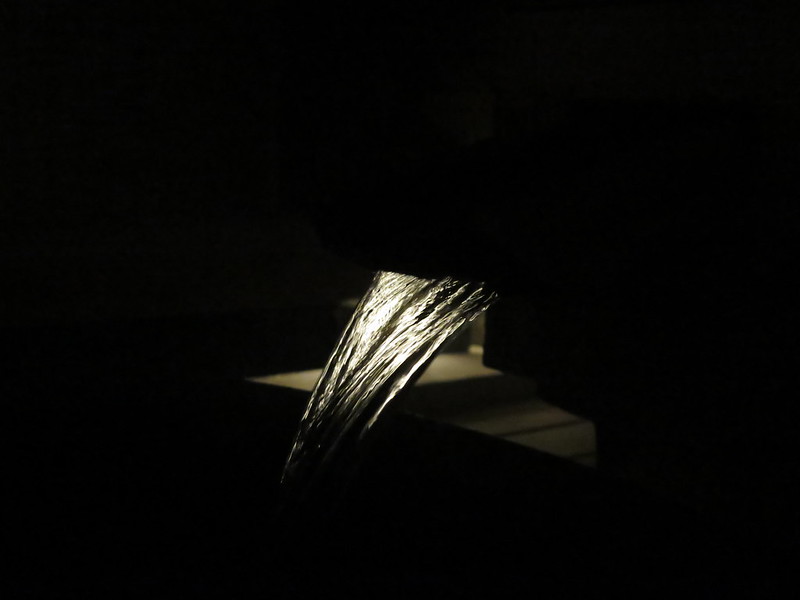 But it does turn out some good shots. 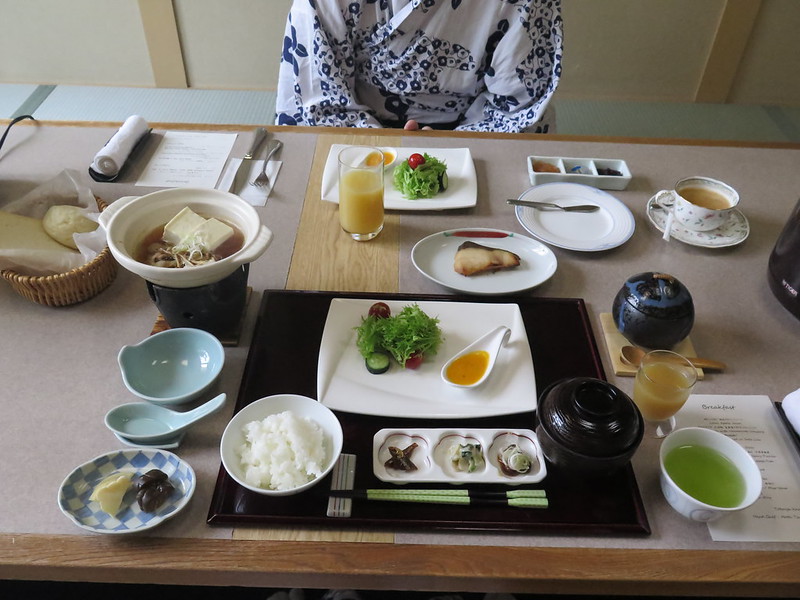 There’s also a traditional breakfast included with the stay. Seating was at floor level, with the table set into a space in the ground. They offered a traditional Japanese style menu and a more familiar Continental. 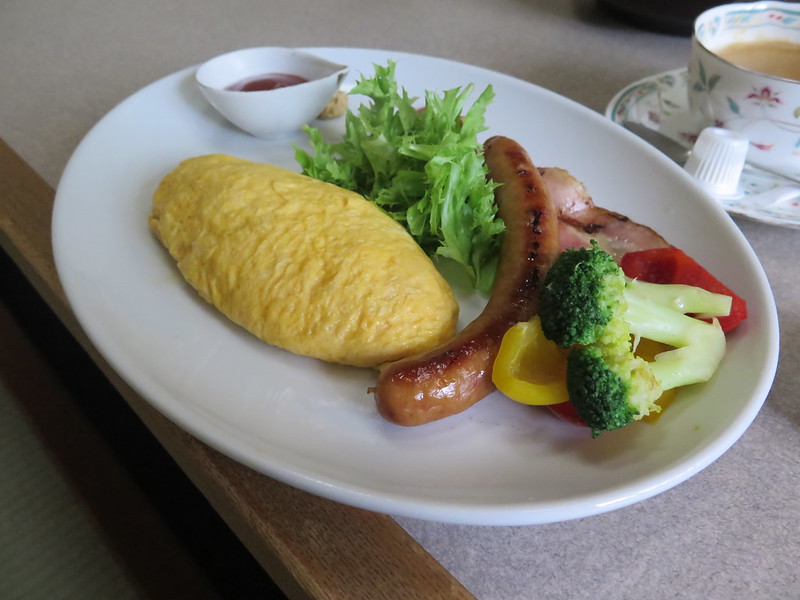 Both were excellent, though for a traveller expecting a standard breakfast the Continental is a better bet. 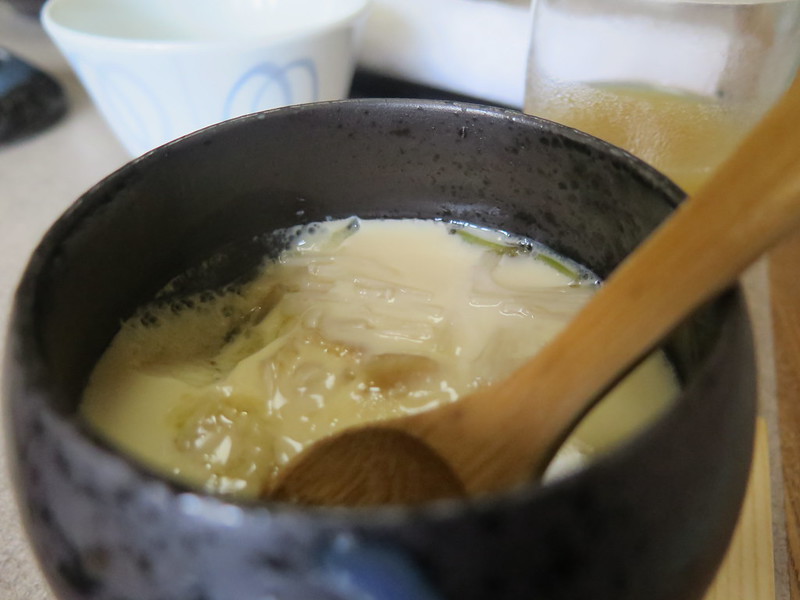 We’re lucky we got both types, because the almond jelly at the end was delicious. 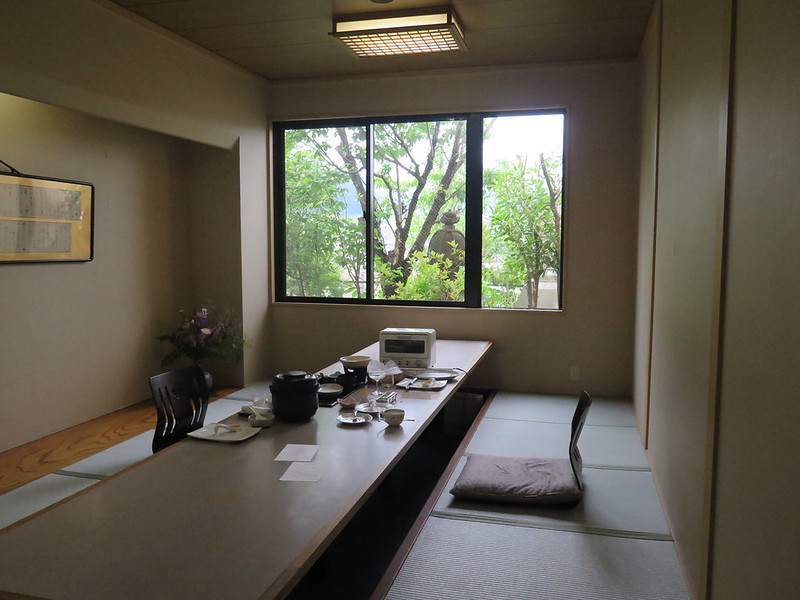 A quick view of the table just as we were leaving – you can see how the seating is arranged.

We left thoroughly satisfied and very refreshed. It was a far cry from our standard of hostel and street food travel, and we wouldn’t want it very often, but once in a while it’s fantastic. 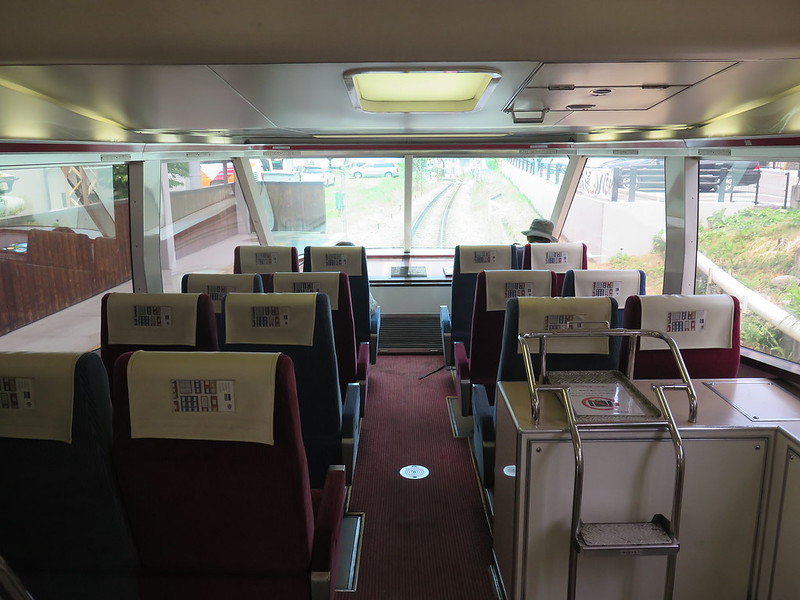 Finally it was time to go. Back on the local metro we went, in a train that looked to be from an older generation which was super cool. From there, back to the JR hub, and back on the road.

One thought on “Onsen and Ryokan”