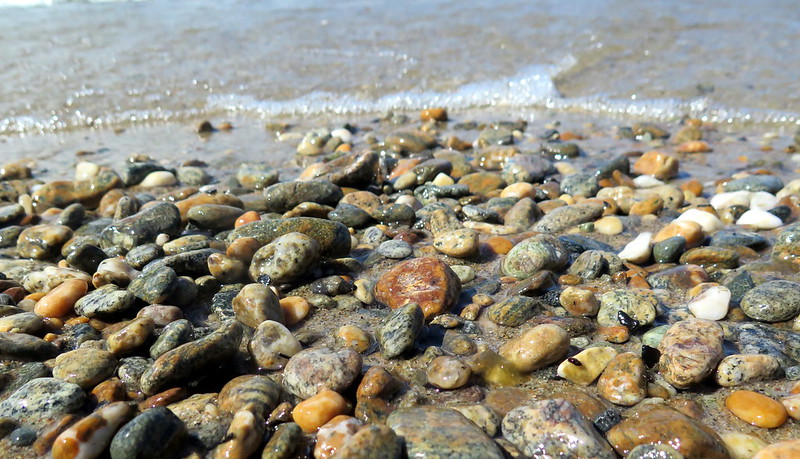 It’s our last day on Baikal, and we’re determined to make the most of it. We hunt for agate on the shore and explore a small stream feeding into the lake. Small fish dart in the stream shallows, bees buzz between flowers, and the grass ripples in the wind. Everything is green and alive with the hum of summer. 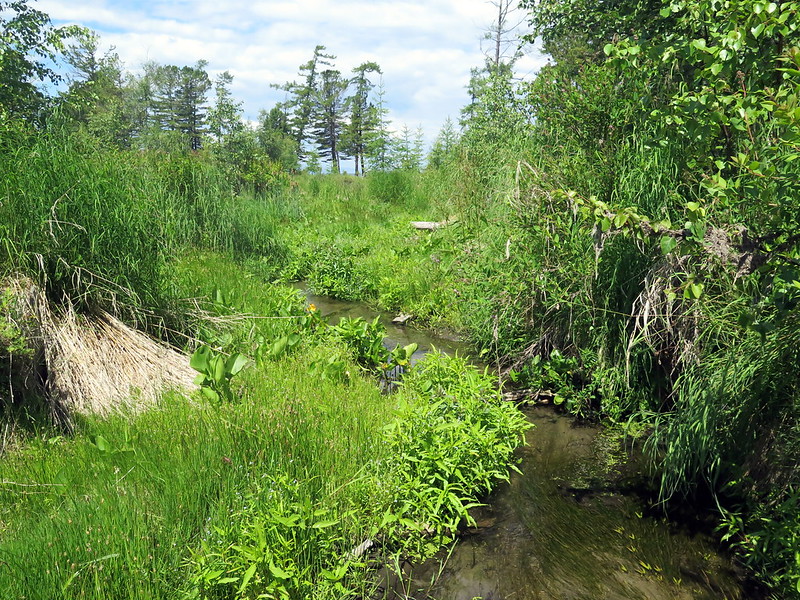 On the way to town for lunch, we pass a group of guys. One is in a tracksuit and holding a selfie stick, while the other two strip down to their underwear and dash into the water with shouts and howls. They manage to stay in the water and swim for a few minutes before they return to land. Because the water temperature hovers at a bone-chilling 50F even now, it’s an inspiring if not unsurprisingly short display.

We make our way to the bus stop and city center to find our favorite cafeteria of the past 24 hours, a tiny hole-in-the-wall kitchen run by a pair of local ladies. One of them greets us cheerfully, takes our order, and in a few minutes comes by with Russian staples of milk tea, pickled carrot salad, and stewed beef and onions over grietchka (buckwheat). There’s also a special today—fried dough balls filled with ground beef. 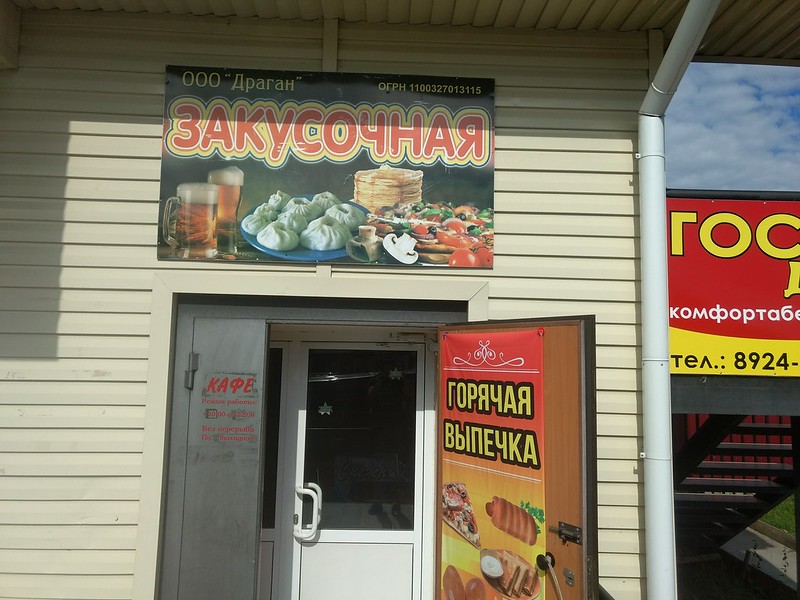 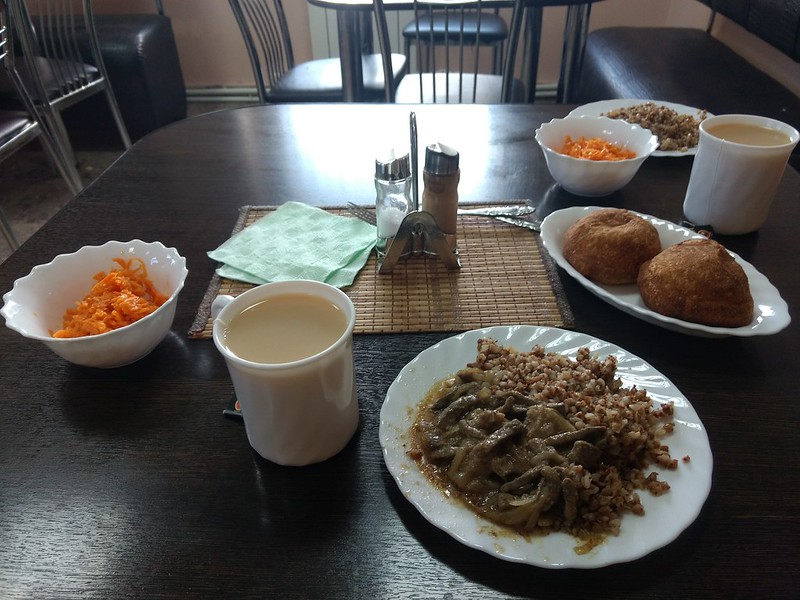 We eat slowly, watching music videos on the cafeteria’s television while people bustle in and out around us. Stoytcho makes some small talk with the woman at the counter, and when she finds out we speak English she asks for the words for several foods they have. She says she’s been trying to learn English but there’s not much on TV and she doesn’t have access to the internet. We translate the cafeteria’s menu for her on a piece of paper as a gift for her to practice, and to make ordering easier for any future English-speaking visitors.

There are only a couple of hours before our bus leaves, but there’s something we have yet to do. After watching those guys go running into the water, it seems like a shame for us to leave without swimming in Baikal. Granted, neither of us brought swimsuits (our hosts back in Ulan-Ude warned us it would be too cold until August) and Stoytcho is a bit sick, but when else will we get this chance? We decide to go back to the shore and give it a shot, one at a time so the other person can watch the stuff.

I go first, stripping down to my undergarments. The wind feels cold on my skin as I face the water and pick my way gingerly over the rocky shore. The first splash of water touches my feet and I suck in air. But keep going, I tell myself. The water becomes ankle deep, then knee deep, and finally deep enough that I can throw myself in and submerge in the icy water. When I come up, I’m hyperventilating and trembling. It’s cold. I swim around to keep myself warm, and after a minute I no longer feel cold. Only a slight tingling feeling remains and I feel like I could stay in, but I see Stoytcho waiting on the shore for his turn. Facing the wind chill onshore is another shock, but after drying off I feel fantastic. Stoytcho and I switch off, and he wades into the water to swim around for a few minutes.

We have so much fun that we make our bus with only a few minutes to spare and clamber in last. This bus takes us back down the coast through Gremyachinsk and turns inland. A few people get off here and there, but most of us are headed to Ulan-Ude. The sun sinks lower over the pine forests and plains rushing by, casting the sunset-orange glow over everything. 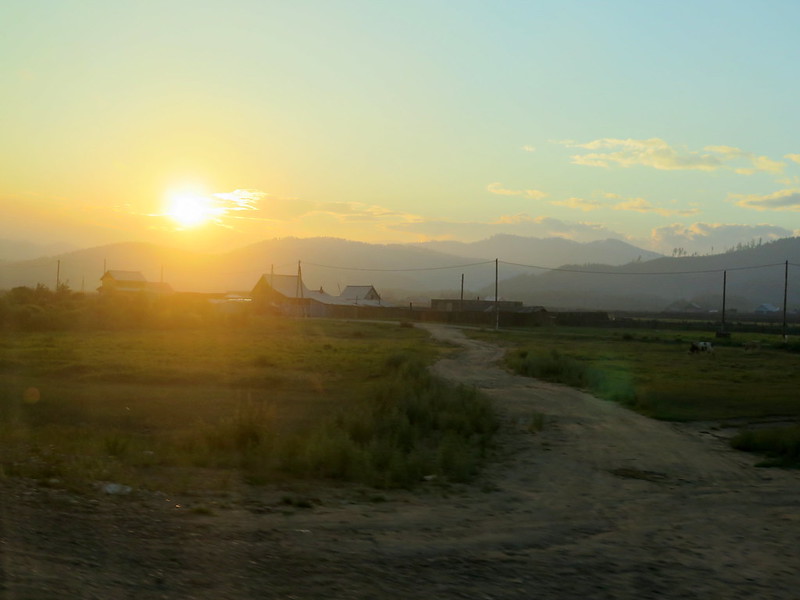 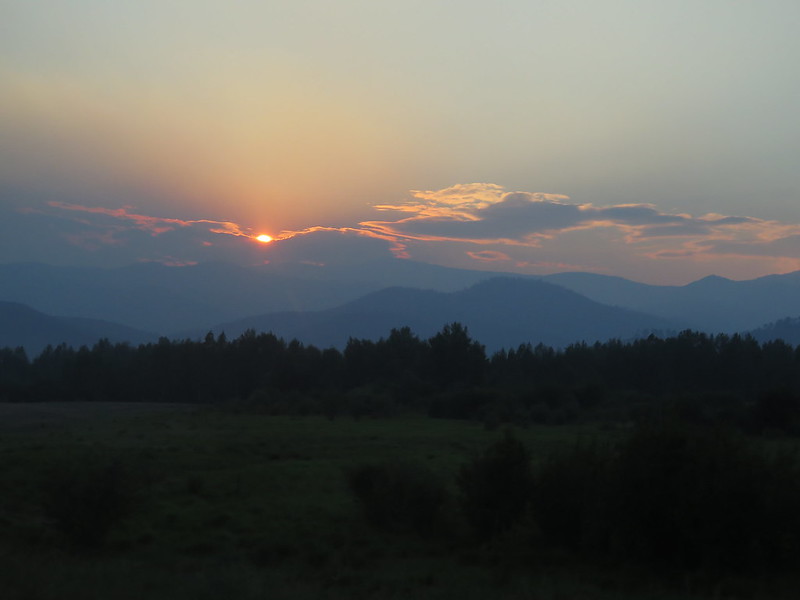 The stops become more frequent as we reach town, and people disembark at the Buddhist temple at the city’s edge and a few of the city’s suburbs. A woman sitting in front of us catches my eye and smiles. She’s familiar but I can’t place from where. When she stands up to disembark, she walks back to us and hands me a handful of candies in shiny wrappers. Then she scampers off the bus. I grin and wave at her, and she smiles back and I remember—she’s a shopkeeper from Goryachinsk. We wandered into her general store and Stoytcho asked for directions to the bus stop. She must have seen my bewilderment as I stared at all the candy, uncertain of what anything was. Now thanks to her kindness, we can find out.