We’re bound from Krasnoyarsk to Moscow on the Trans-Siberian, a trip of 2.5 days. We’ve got a little bit in the budget to spare, so we’re springing for splany wagon instead of kupe, so we’ve got a cabin all to ourselves this time. It’s uh, definitely a step up: 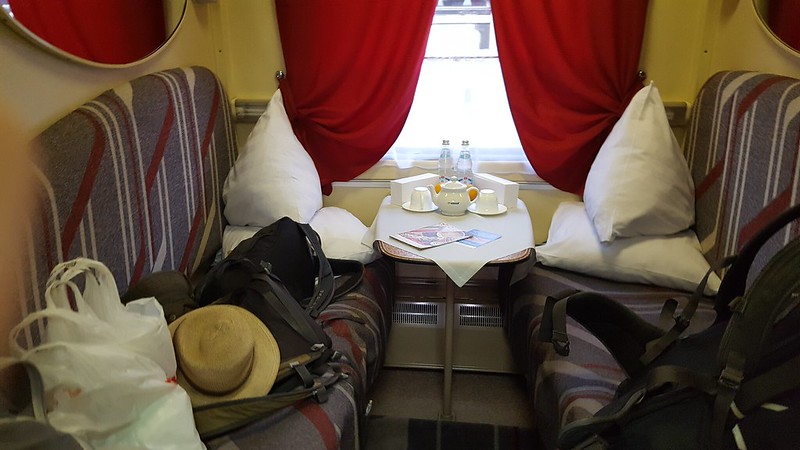 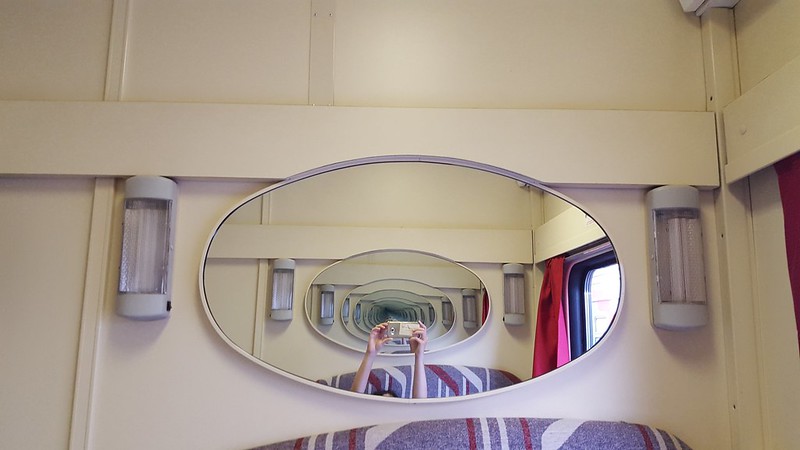 The ticket also includes one meal. Yeah, one. For 62 hours on a train. But don’t worry, now versed in the ways of Russian train travel, we’ve come prepared. We visited a grocery store just before leaving our hostel and used the kitchen to boil potatoes and eggs. We also bought vegetables, cheese, and lukanka for salads and sandwiches, fruit, and a lot of chocolate. Bring it on, Trans-Siberian!

AUGHHHHH. Death by starvation is unlikely in our cabin, but death by boredom sets in fast. The excitement over our Splanywagon cabin lasts for a few hours as we find places for things and settle in for the long ride. The silence follows. We read books, write blog posts, read more books, and organize photos. When we’re done with that, we stare out the window. Though we now pass more towns and cities, the landscape continues to be endless. 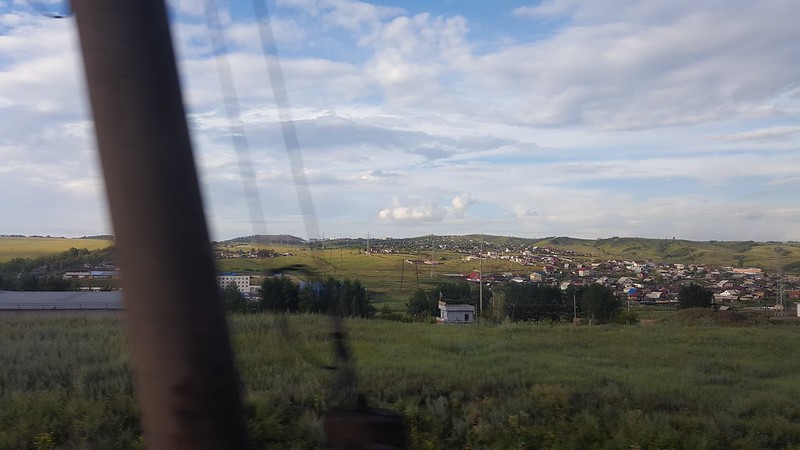 The undeniable boon and bane of Splanywagon is its privacy. With only two in a cabin, you never have to interact with anyone you don’t know, save for the traincar attendant. With my interest in reading and writing exhausted in half a day, I find myself walking the corridor outside our door restlessly, pausing to look out the window. I rarely see anyone and the few people I do see give a half smile and nod before diving back into their cabins. They don’t want to talk. 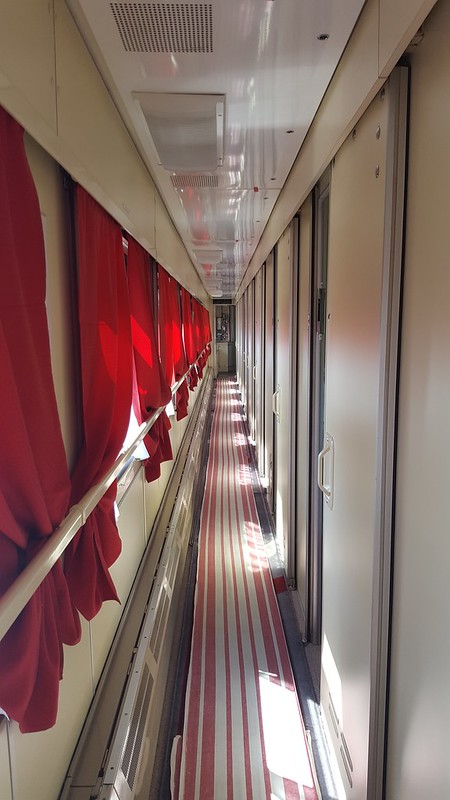 So there are no chance meetings, no funny stories here in Splanywagon. There is only the countryside and your mind to keep you occupied. And beyond that, there is the great unbearable silence. 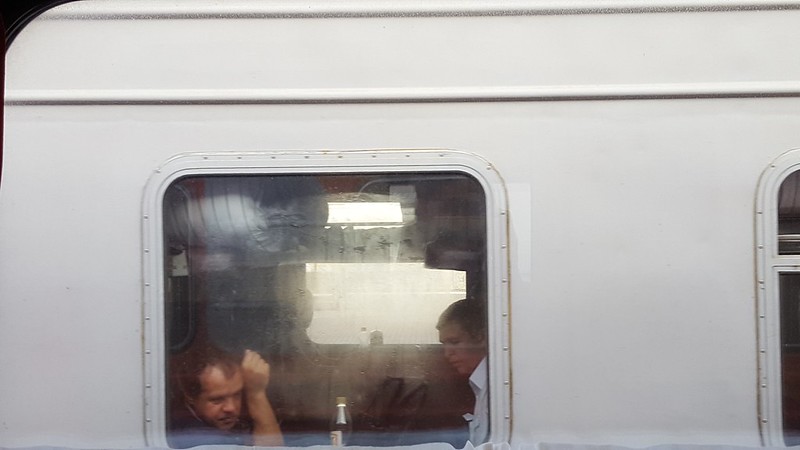 The anatomy of a stop

As we head westward, we encounter more towns and cities and find the train stopping often. While most stops only last a couple of minutes, the train will stop for anywhere from ten minutes to half an hour at certain major cities. These are the long stops everyone is waiting for.

There are two types of long stop, the short-long and the long-long, and the stop type determines what everyone will do. The short-long is hurried and frantic, as everyone rushes out of the traincar to walk around, buy snacks from kiosks on the platform, and chat frenetically. In the plazcart section, the additional goal seems to be huffing as many cigarettes as possible in five minutes. People try not to stray too far from their traincar and the attendants keep a wary eye out for anyone wandering off.

The long-long is somewhat more relaxed, though it depends on who you are. Most people take the chance to slow their pace of walking and conversation, and the frantic cigarette huffing is replaced with a slower burn. We’re free to wander around the platform, which from end to end can be more than a half a mile long. And we can stare out between the fence at the city we’ve stopped at, watch its people carry on with business in the square outside the station.

Then there are the long-long runners. These are the people who take the opportunity of a long stop to actually go do something in the city. It’s usually a run to the grocery store or liquor shop (though alcohol is not allowed on the train), and you can spot them because as you’re getting off the train, they’re already running through the doors into the station. They’re gone for fifteen or twenty minutes, probably visiting a store in the main square, and return about five minutes before the train departs laden with grocery bags. I have no idea whether how they get through the security and ticket check in that time.

How does mail go between east and west Russia? Well, apparently one of the options is by train. These guys were unloading mail from a traincar at one of our stops, just bags and bags of letters: 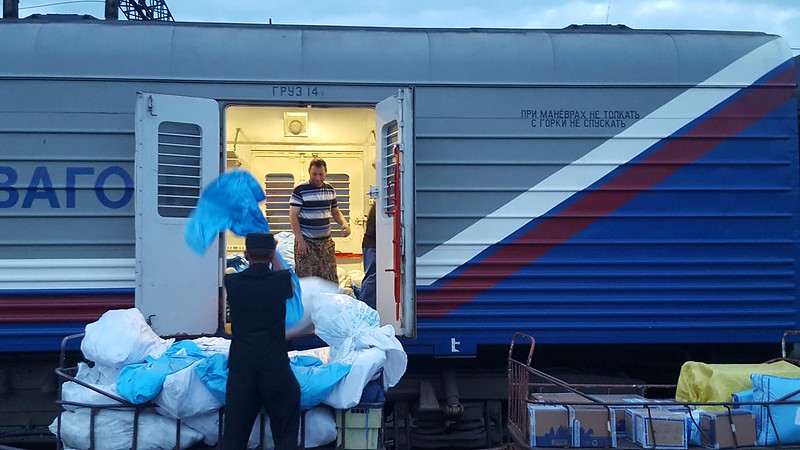 I can’t explain my joy at seeing this, although it may partly stem from the total lack of new things to see or do in the last 48 hours. But the Mailcar is just so cute. It’s labeled as the ‘Почтовый вагон’ or ‘postal car’ and they’ve got a tiny tractor out hauling little carts with packages and bags of letters and everything. I love it.

A change of scenery

In the last 15 hours of our trip there is a marked change in scenery. We’re no longer in Siberia, with its open plains and pine forests and emptiness. Instead, the scenery outside looks more European, frequent villages and cities separated by small patches of countryside. We’re encountering the ‘дача’, the ‘dacha’ or ‘country home’, something common throughout Eastern Europe. The dacha is the original farm or homestead of a family, kept even when everyone in the family has moved to the city. In the warmer months, it serves as a weekend getaway. It’s also a place to grow some fruit and vegetables, saving some money on the more expensive city produce.

On the morning of our arrival, we awaken at 4 am and catch the sunrise over the misty countryside. In an hour, the last of the green fields disappear and dense buildings spring up in their place. This is the edge of Moscow.

Our train edges in to Moscow’s Kazanskaia Station at 5:38 and we stumble off with our belongings. I have a hostel booked for us, but they’re not going to let us check in at stupid o’clock in the morning. “10 AM”, the attendant at the hostel says, “We can have a room for you then.” We drop our heavier bags and wander out into the 7 AM world, devoid of all but a few people and a handful of cars. We’re unsure of what to do until we spy a familiar landmark in the distance.

It turns out absurdly early in the morning is a great time to visit St. Basil’s Cathedral. Our only company is a cluster of policemen directing traffic and a handful of construction workers working on the nearby bridge. I am not a morning person, so this experience is possible only because we’ve been gaining hours as we head west. But the morning sun, the open space, and empty streets of Moscow feel good. 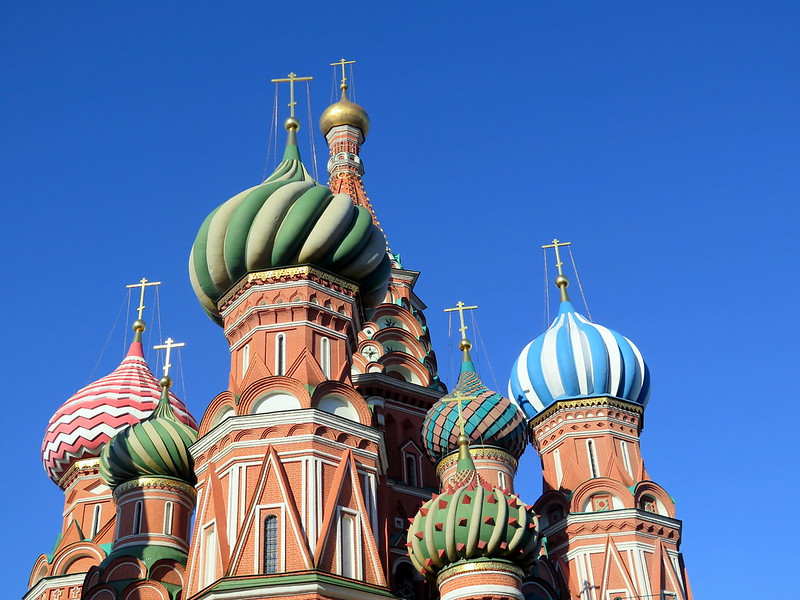 2 thoughts on “Tales from the Trans-Siberian (Krasnoyarsk->Moscow)”