We’re now in St. Petersburg, a distinctly European city filled with colorful characters and locals. The change in both architecture and atmosphere is amazing, but makes sense—Peter the Great built this city from a nothingness of swamp to be closer to Europe and learn her ‘modernized’ ways. He was astonishingly successful. One story (shared with is by Guy of a previous post) tells of Peter’s dispute during the city’s construction with a noble, his close friend: “The noble told Peter the Great ‘Your majesty, sir, we cannot build a city here. There is only swamp. Nothing can survive here!’ Peter asked him ‘Do you see that tree over there?’ ‘Yes,’ the noble responded. ‘That is where you will build your house.’” Now St. Petersburg stands as a gateway between Russia and Europe, one that most tourists can access visa-free.

That has not helped prices, which are sky-high in the city for everything from food to housing. Our hostel is friendly, but housed in a dilapidated apartment building with cracked floorboards and uneven walls. We found two bed bugs earlier today (picture here); after an obsessive search of our beds and our rooms, we determined there were no more in the immediate vicinity, zipped up the backpacks, and put them as high up as possible.

BUT we also have amazing company in our roommate Javier, who comes from along the U.S./Mexico border but just came from working in China. To celebrate, we decided to go a vodka tasting at the local Museum of Russian Vodka, until we found out it’s 1,000 rubles per person to taste only 3 types of vodka! So we did a better, potentially worse thing for us: we went to local liquor stores and bought as many different small bottles (~100 mL) of vodka as we could find. Because our hostel forbade alcohol consumption on the premises, the three of us gathered in the dusty stairwell on the floor above for our vodka tasting.

Here are our ever so not-expert notes on their flavor profiles and drinkability: 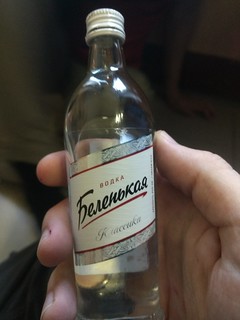 Stoytcho: This stuff is alcoholic with no real flavor, nor is it particularly smooth. 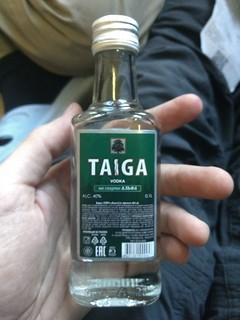 Stoytcho: Much smoother, fern and forest notes. Much lower bite of alcohol.

Natalie: Much less harsh front alcohol flavor, back of the throat burn. Fruity, reminiscent of peach bruise flavor with a bitter aftertaste. 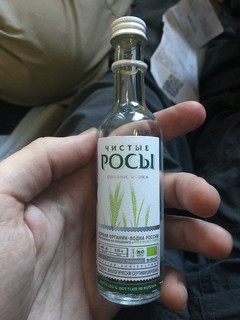 149 rubles for 50 mL, this is the fancy BIO-labeled (Europe’s version of USDA Organic), high-end stuff that’s kept in a glass case. Its name means “clean dew”, though I’ve never known dew to have an alcohol content this high.

Stoytcho: Good burning sensation, not as smooth as Taiga but more flavorful.

Natalie: Also smoother than the first one, a little burn at the front of the mouth and back of the throat. Flavors are more pine-nutty instead of fruity. 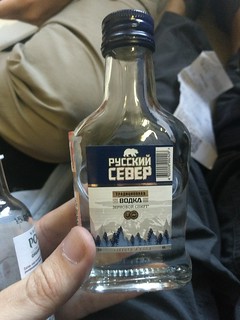 71 rubles for 100 mL, this bottle says ‘I’d rather be out on the Russian tundra’, which is fitting for something named “Russian North”. It sports a couple of tiny awards printed on the front, but goodness knows what they’re for.

Stoytcho: Sweet and corny, too sweet for my taste. Smooth though. Upon second taste, I get old rubber hose.

Natalie: Slightly sweet, but more of a barley or wheat flavor. Smooth-ish, but not as smooth as Taiga. On second taste, I get barley. 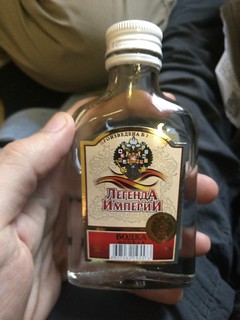 70 rubles for 100 mL, I get the feeling this bottle is lower or middle-shelf based on the bright bottle label and font. This is “Imperial Legend”, so let’s see what that legend is all about.

Stoytcho: Fairly smooth with a mild burn. A bit sweet, but not overwhelmingly so. 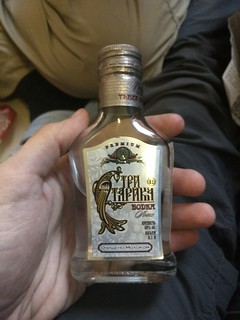 80 rubles for 100 mL, this alcohol has a similar lower- or middle-shelf shiny, ornate label with a peacock. Let’s see what “Three Old Men” tastes like. 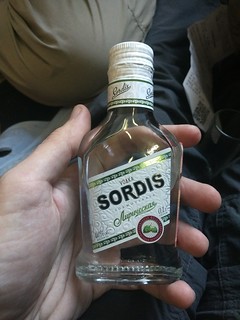 82 rubles for 100 mL, the clean label indicates this is ‘middle-shelf’ vodka. A sticker on the front says this vodka is ‘silver-filtered, special story’. So that’s a selling point, I guess?

Natalie: It’s sweeter and less harsh than the last one, but has a hideous bitter flavor. Ughhh…so bitter, nasty. God, this is what I imagine isopropanol tastes like. 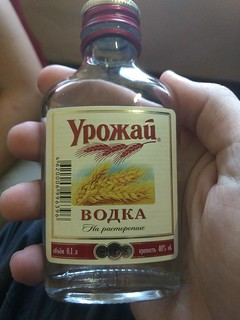 65 rubles for 100 mL, with a simple, colorful label that says ‘yeah, I’m pretty cheap.’ The name means ‘vintage,’ so maybe we can take the bottle to a secondhand store afterward.

Natalie: Semi-smooth with a tongue-throat after-burn. Main flavors are wheaty and bready. Hey, this is like drinking a slice of bread! (Stoytcho: no, that’s kvas). 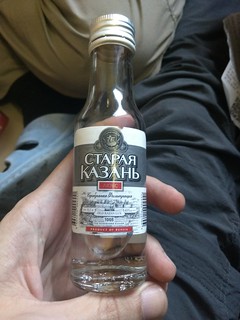 65 rubles for 100 mL, this is “old Kazan Lux”. Kazan is a city at the edge of the Urals, famed for its architecturally gorgeous ancient fortifications and mosques. Let’s see what Kazan has in store for us.

Natalie: very sweet, with rubbing alcohol aftertaste and throat burn. Not super fruity, just sweet. Ok, now THIS is the lab ethanol I’ve been inhaling as it evaporates off surfaces for the last five years. I bet this burns perfectly if I need to sterilize some equipment.

(All of us voted this one the worst. Sorry, Kazan.) 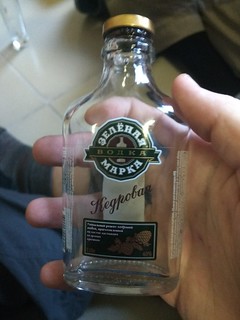 77 rubles for 100 mL, this bottle of ‘Green Mark’ is in an odd position. For one thing, Stoytcho has already read online it’s some of the best Russia can offer. But they also didn’t have any “original” flavor Green Mark at the store in a convenient 100 mL format, so we went with ‘кедровая’ or ‘cedar’ flavored.

Stoytcho: Smooth, mild burn, with a grassy sweetness. This is indeed really good.

Natalie: Sweet, slightly pine-nutty, would pair well with juice. It’s not to burny and fairly smooth, kind of like Listerine. Ok, I’d drink this.

Between each taste-test, we rinsed our glasses and our mouths out with water. After we calculated the first scores, we tried the top five vodkas iteratively until we had a definitive ranking. And our winner is…Zelyonaya Marka! Perhaps we were biased by online reviews, but it was pretty drinkable. Here’s how all of the vodkas ranked, just for you: