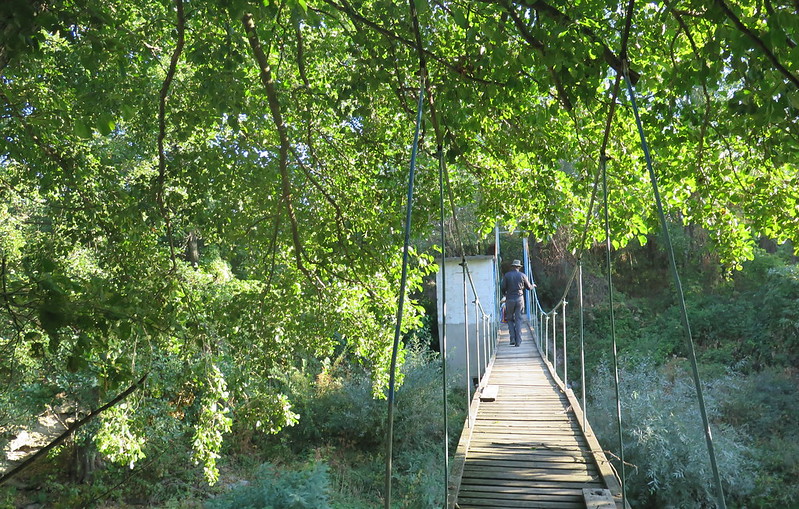 Lela Stanka says there are Roman ruins on the hill beside Nikolaevo, the remnant of an old fort from millennia past. She says this matter-of-factly, like this isn’t a big deal, because this is Bulgaria and ancient ruins are everywhere. There are more ruins in this country than anyone knows what to do with and they all can’t be tourist destinations. This particular outpost sits mostly-forgotten, and Lela Stanka warns us that if we want to find it, we’ll likely be tromping in undergrowth instead of on a trail.

On our last day in Nikolaevo, we set out intent to find the ruins. Since we’ve pestered her for chores, Lela Stanka sends us out with a sack to collect kindling for the winter. We trudge uphill on a trail, picking up sticks and twigs and shoving them into the sack, looking for the turnoff point Lela Stanka suggested we take to find the ruins. It leads into a grove of planted trees, lined neatly in rows and identical in age. It’s almost impossible to tell which direction to head, save for uphill and downhill.

We make our way uphill until we reach the top, crowned with some rocky seats and scorched fire ring. There are no Roman ruins here. We return to the grove of trees and pick another direction, and still nothing. We spend an hour wandering in all directions. It seems like a man-made structure like a Roman fort would be impossible to miss, and yet we can find nothing.

We’re about to give up and begin walking back downhill when Stoytcho notices a small side path into another part of the woods. We follow its curve uphill again, around a bend and into a dry, grassy field filled with skittering grasshoppers and floating butterflies. To one side there appears to be a vertical rise in the hill, choked with vines. 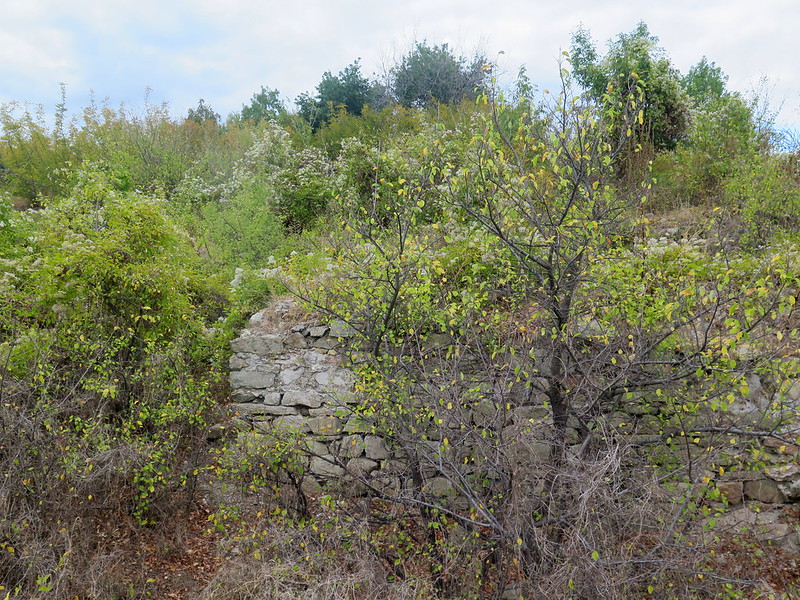 It’s not a rise in the hill. It’s a wall. We’ve found the ruins!

In this day and age, there’s not much left but the foundations, piles of rocks held together by crumbing Roman concrete.  We climb over the outside wall into the remnants of the fort’s rooms and corridors, picking our way through clinging vines and overgrown shrubs. Rumor has it that there’s a tunnel from this fort that leads down to the Radova River below, where the Ottomans hit Thracean gold during their retreat from Bulgaria centuries ago. But what little was here was probably plundered years ago, and nothing remains broken stones.

We follow a wall of the fort away from the field to a steep cliff at the hill’s edge. From here, we can see for miles across the countryside, over a patchwork of fields to the mountains in the distance. This view is why the Romans built a fort here, and where we stand now a millennia ago would have been occupied by Roman soldiers, watching, waiting, guarding, eating, drinking, thinking about their future lives, boasting about their past victories. Living.

We leave the ruins and return to the fork in the road, where we hid our sack of kindling for Lela Stanka. We start back downhill to Nikolaevo, its low mud walls and concrete buildings visible over the treeline. In two thousand years, I wonder whether there will be any remnants of Nikolaevo left, and if intrepid kids from a nearby settlement will explore and play here.

One thought on “Roman Ruins”