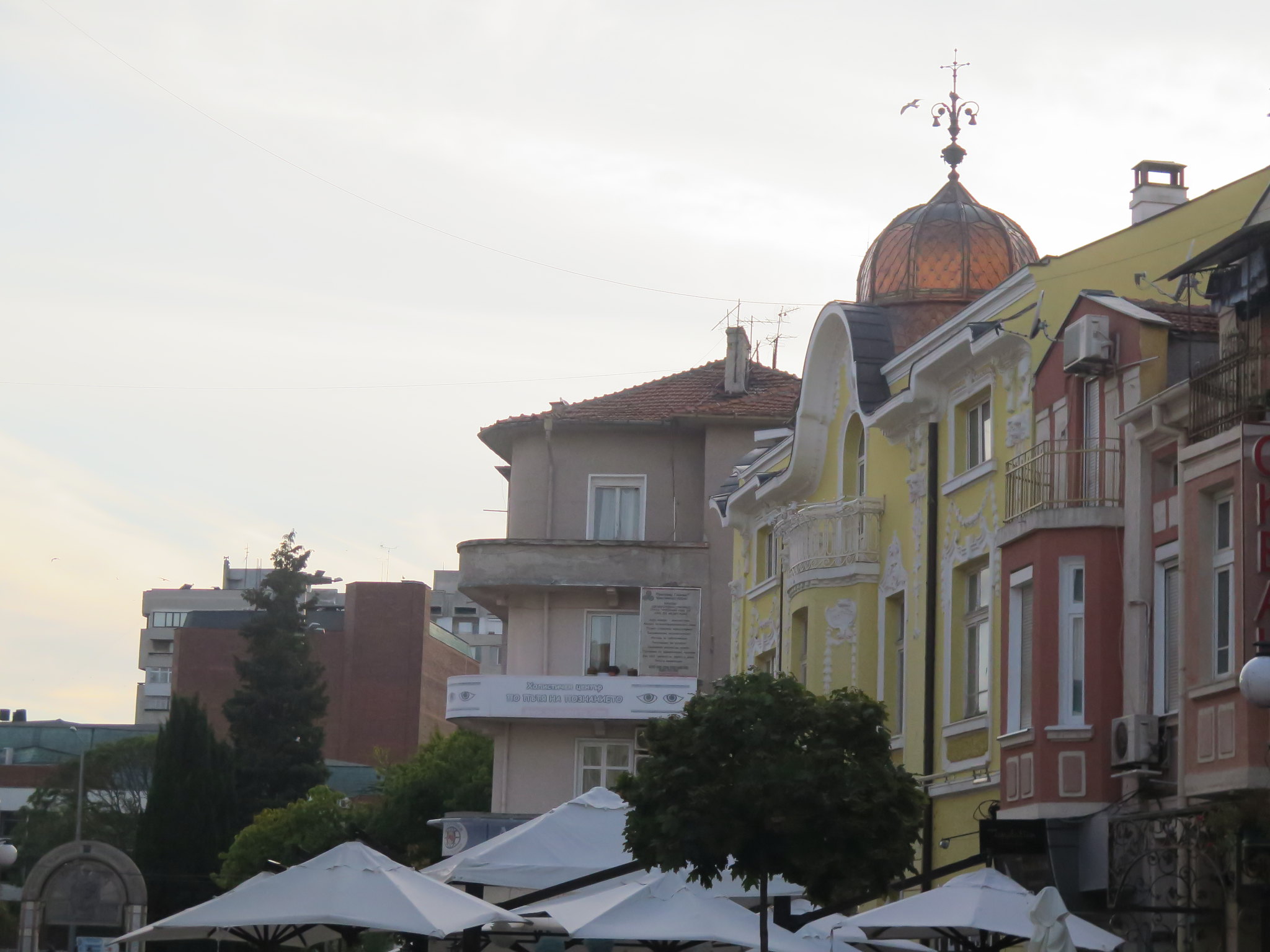 Burgas is an interesting place. On the Black Sea coast, it straddles the beach town / industrial city divide very well. As one of the more prosperous cities in Bulgaria, the quality of life here is very good, and most tourists would feel right at home. I’ve always seen it as that really nice city by the sea, and now that my uncle lives there, we got to take a closer look. 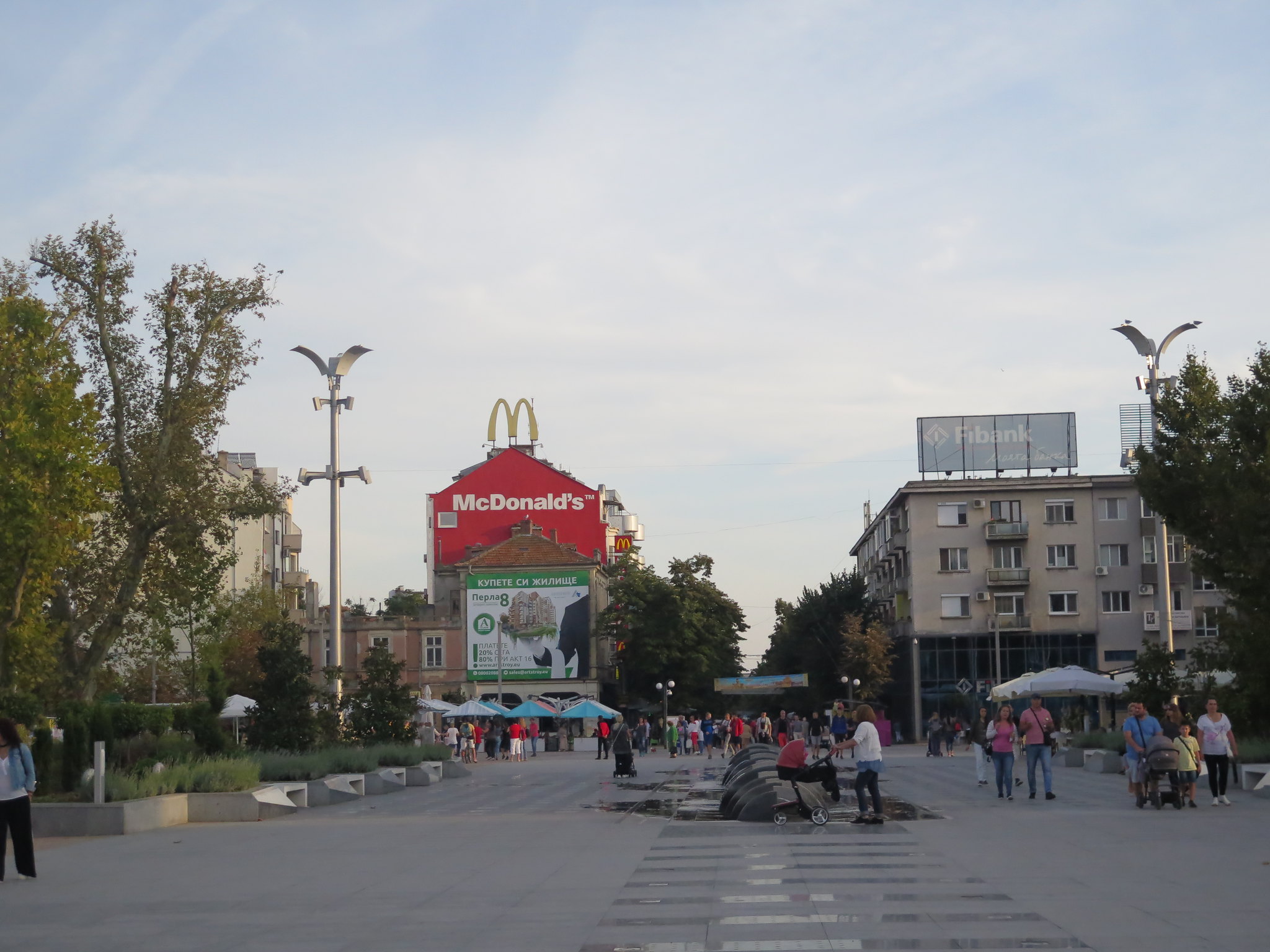 From what we could see, Burgas divides into roughly three zones. This is a shot of the pedestrian inner-city. It’s somewhat removed from the beach, and it is a drive away from the outer ring where most people tend to live in highrise apartment buildings. The center of the city, as with many Bulgarian cities, is dominated by a pedestrian only promenade. This one stretches for at least a half hour of walking, if not longer. People meander along the promenade as a daily activity – there are plenty of snack stalls, restaurants, and sights to see. 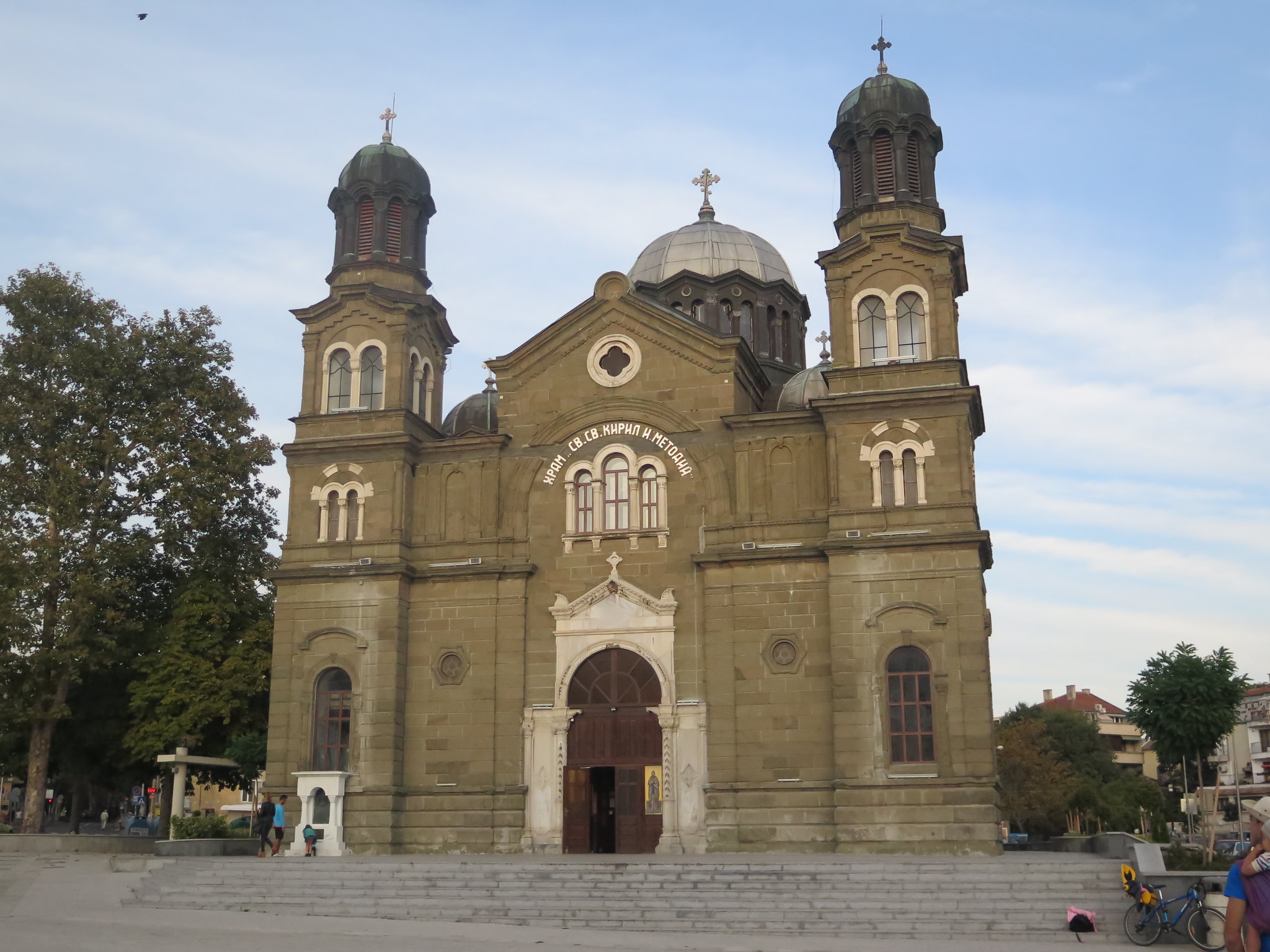 The center has lots of older buildings – a lovely hram – a cathedral, dedicated to St. Cyril and Methodius, founders of the Cyrillic alphabet. 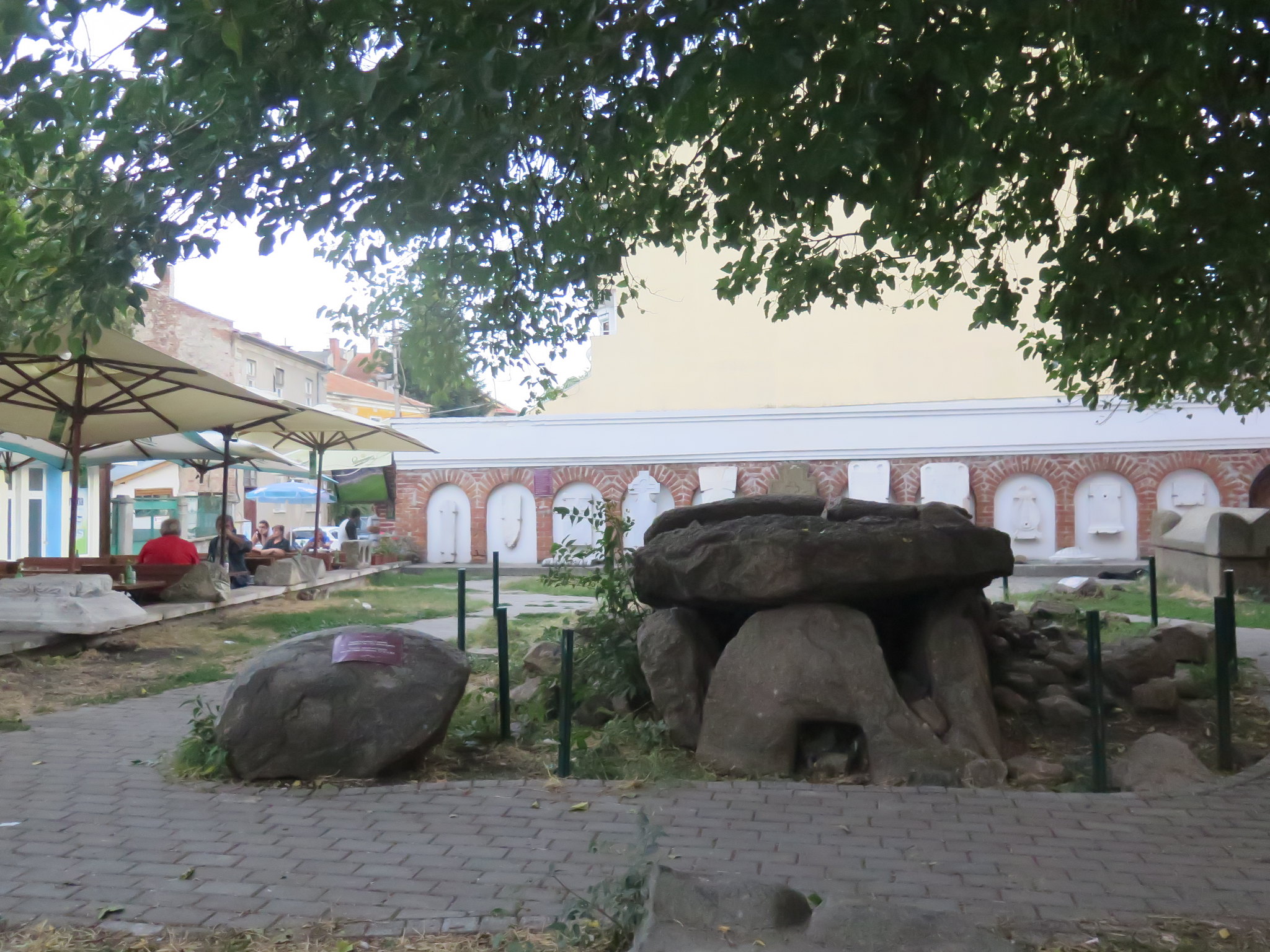 Much like Plovdiv and Sofia, Burgas is trying to expose some of its ancient history, and here we see a tomb from a time long passed. It’s a nice thing to see – everywhere around the country there is a growing awareness of the history of our lands. It used to be commonplace for looters to dig through historical sites and leave them barren and ruined. There seems to be more care now. 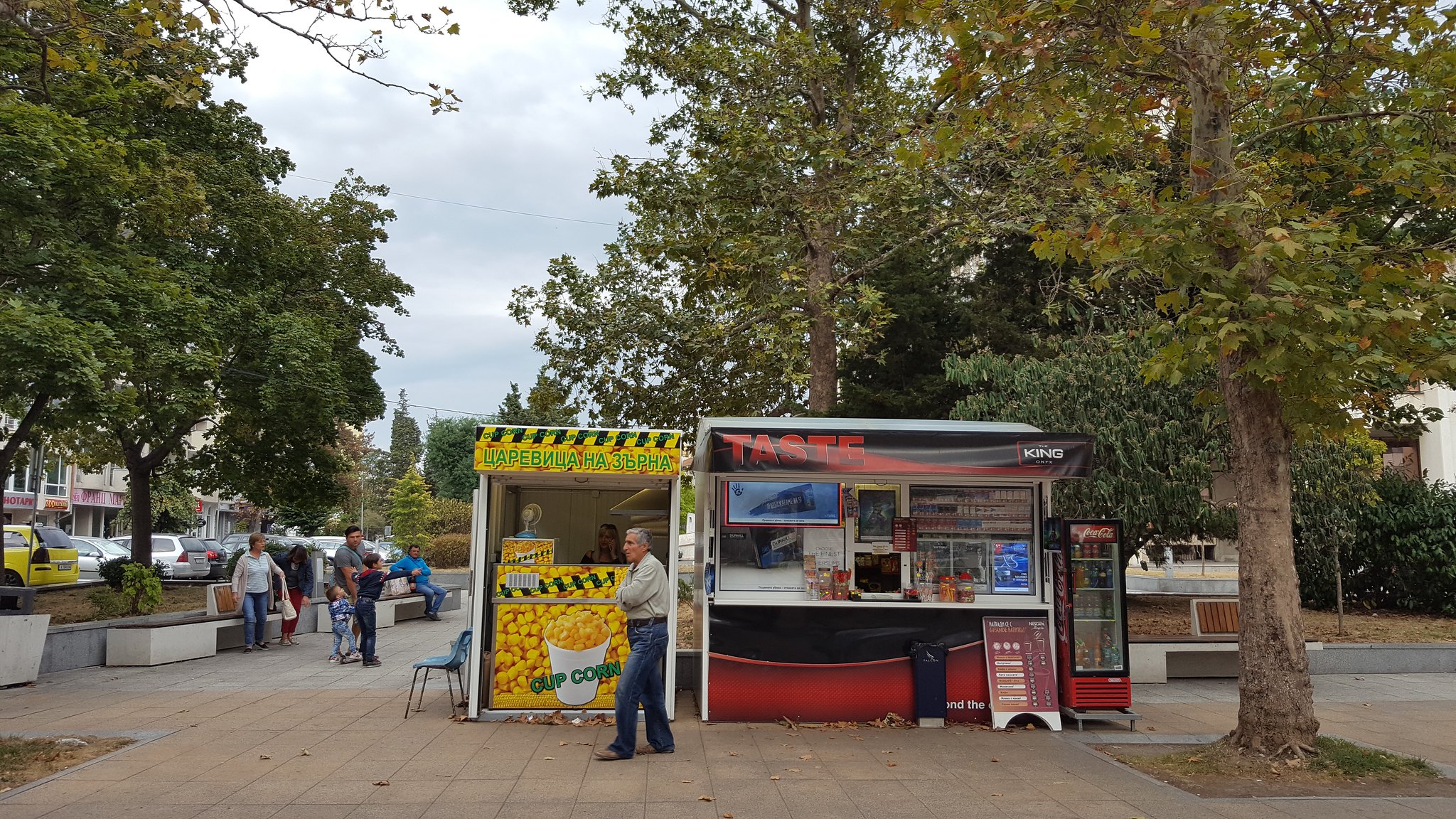 One of the many snack vendors along the walk. This one is selling corn, and a pop-up convenience store is next door. Boiled corn is a favorite treat as in many other countries. There is a lot of writing in English here. The city is well known for tourism and so it is slightly easier to get around than some of the others. Along with the euro-tourism, there is a large contingent of Russians living in the city permanently. You can find Russian delis and candy shops all over the place. For us it was a nice reminder of our time in Russia, I am not sure how the locals feel about it. 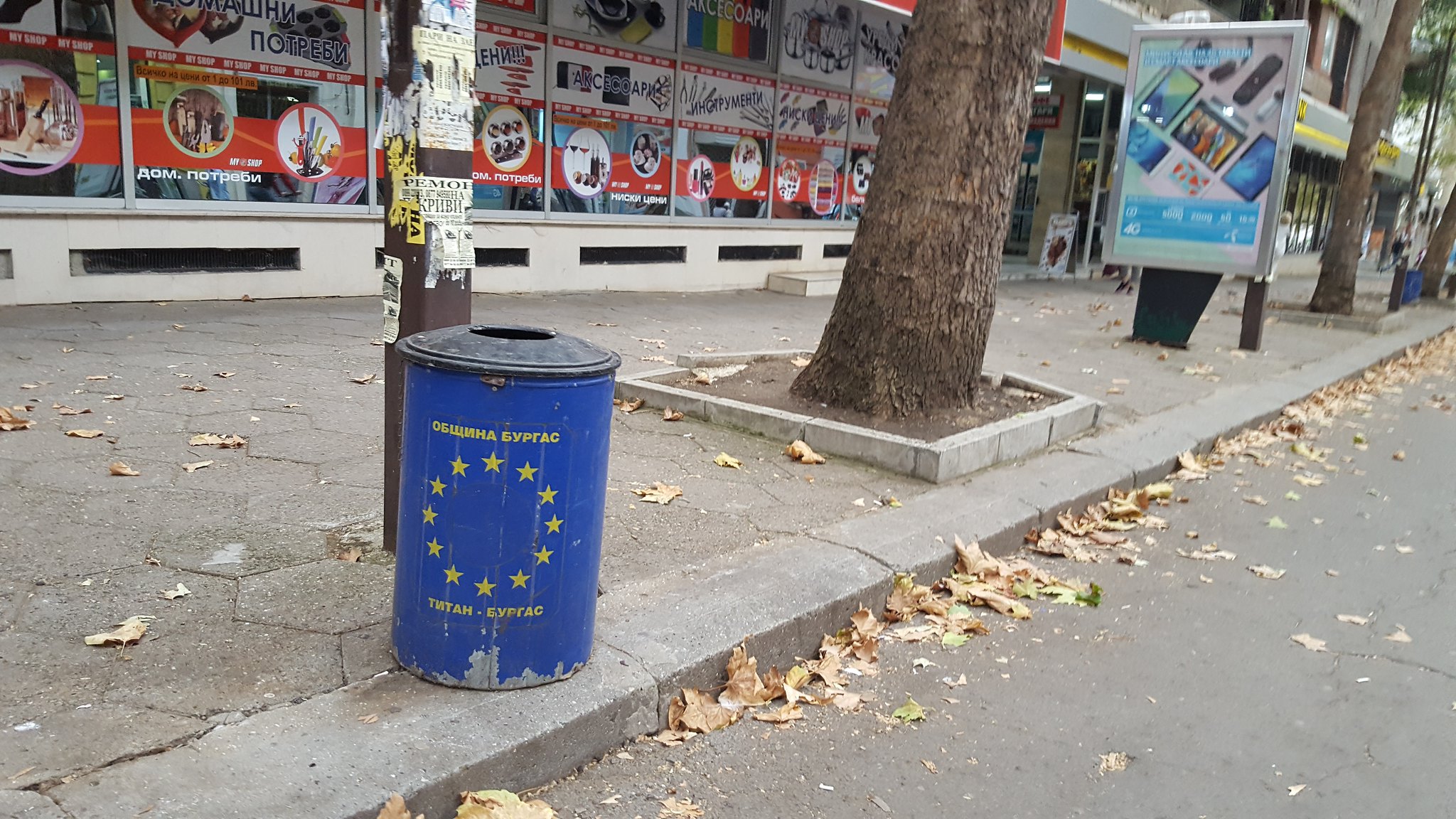 Burgas is remarkably clean. One of the major reasons, it seemed, were these trashcans placed all around the city. I think Bulgaria has benefited greatly from EU money, and in exchange the EU wants to buy diplomacy and fond feelings. Every project that has EU money in it has a prominent display of just how much, and how it was made possible by that grant. These trashcans are an interesting and very visible example of that. 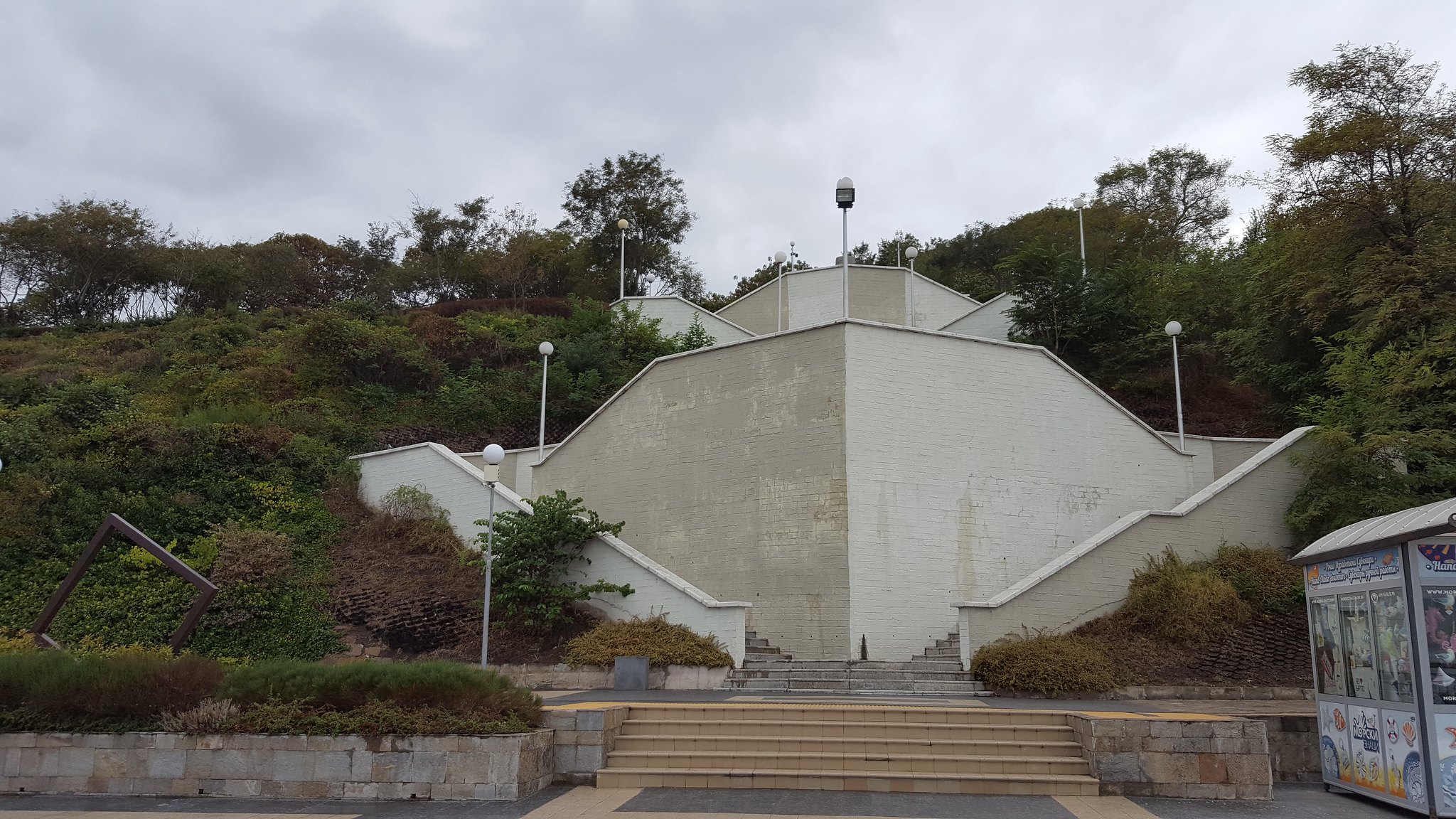 Keep walking down the promenade and eventually it comes to a sea-side park. The park is at the top of those stairs that sort of look like a gundam and the sea is behind us in this shot. The park is really nice actually, a long stretch of green deep enough to leave the traffic noise behind. When I was here last it had a bit of a neo-nazi graffiti problem, which seems to have been cleaned away. 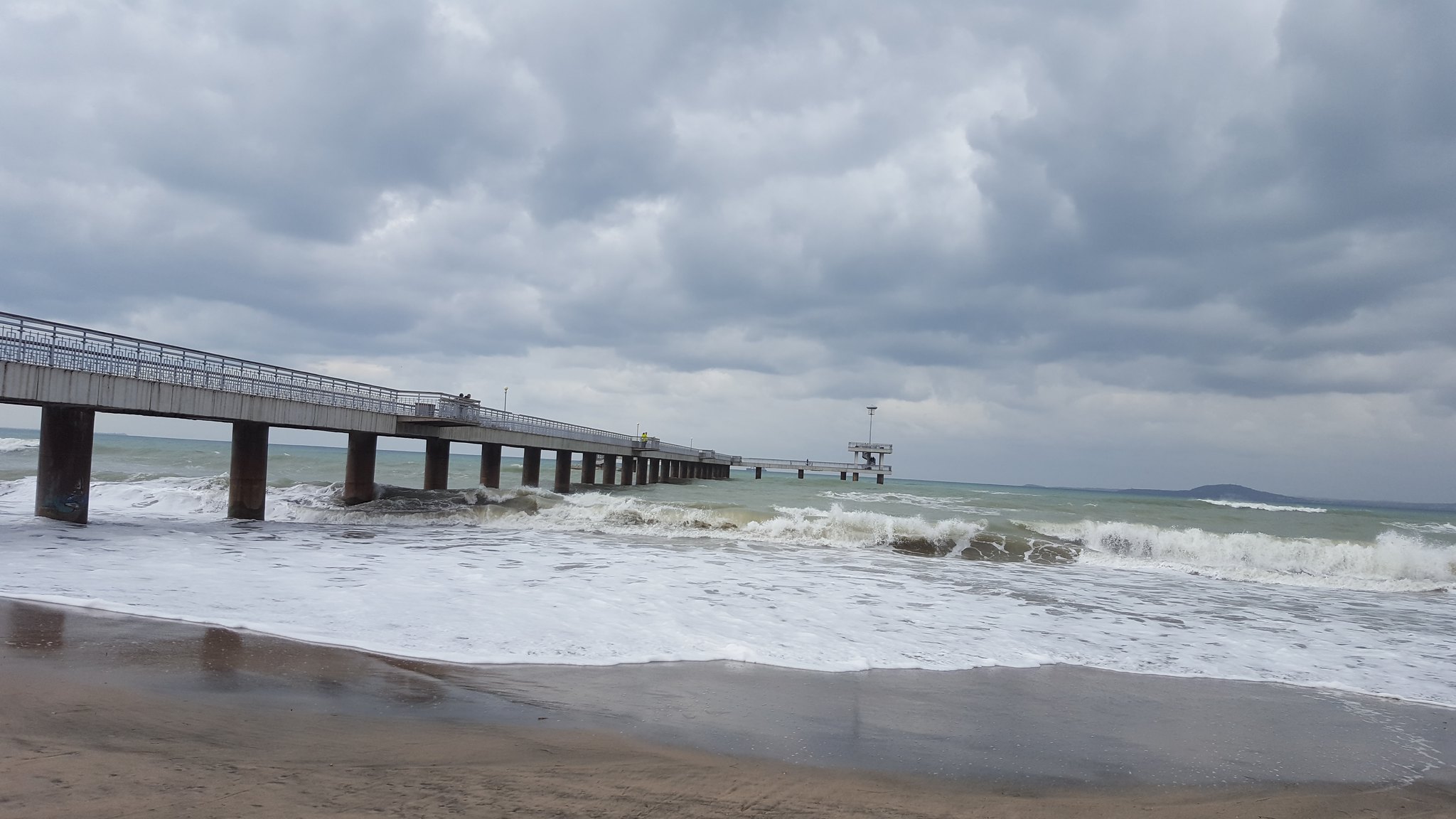 The Black Sea! One of Bulgaria’s sources of pride. Shared by Romania, Ukraine ,Turkey, Russia, and Georgia, it is a an active trading sea and massive tourist draw. Russians and Europeans alike love coming to Sunny Beach, one of the coastal resort towns for a dirt cheap seaside vacation. I personally have very fond memories of vacationing on its shores, though not in Burgas. To get to the vacation-y parts you have to go north or south. Burgas’ industries would make me a bit hesitant to swim right there. 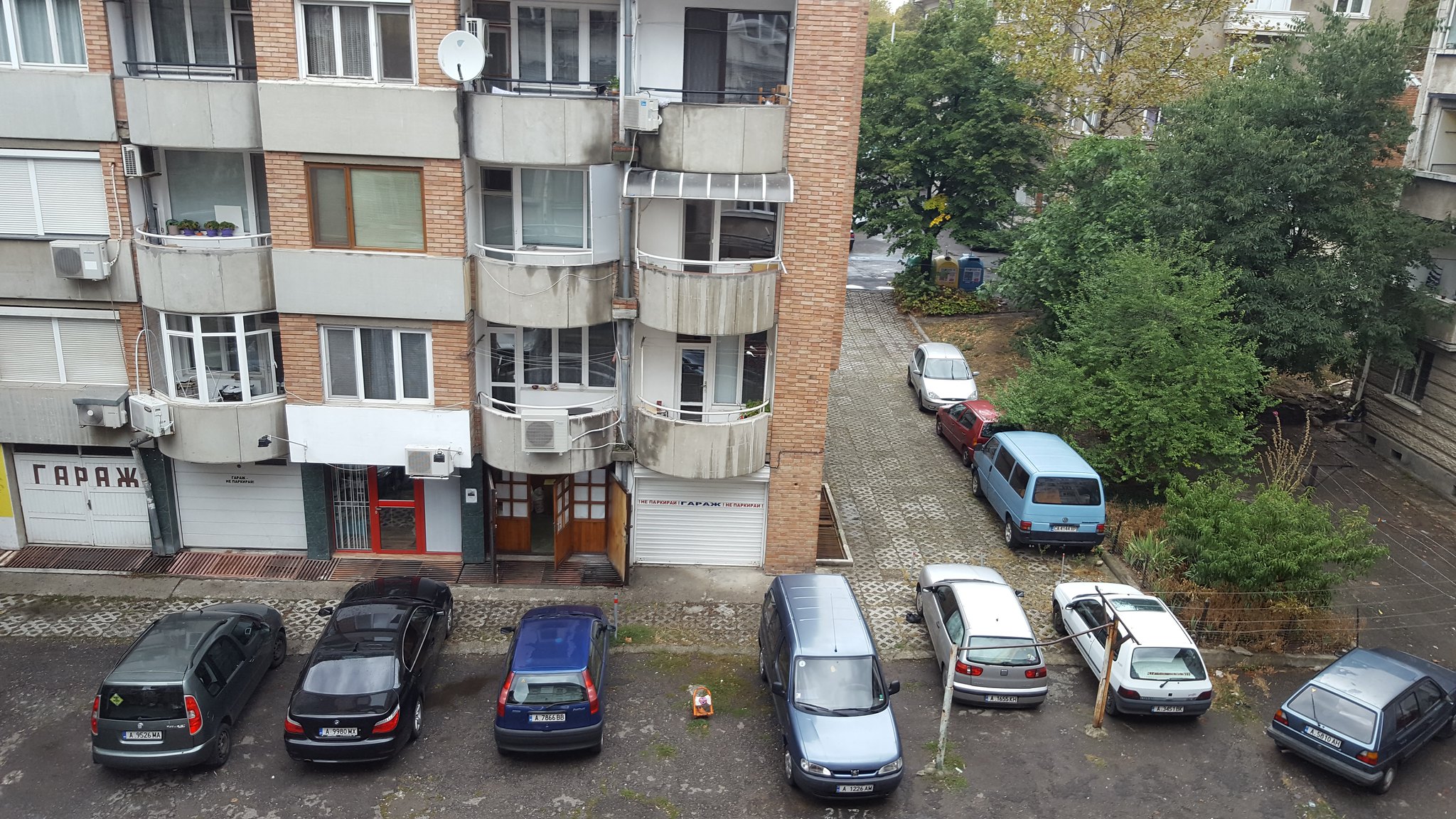 This is a view from our apartment near the city center. There are fancier places like the ones in the top photo, but they’re really for those who are very well off. This is ‘affordable’ wealthy in Bulgaria. Everyone else lives outside the center in winding clusters of apartment buildings. 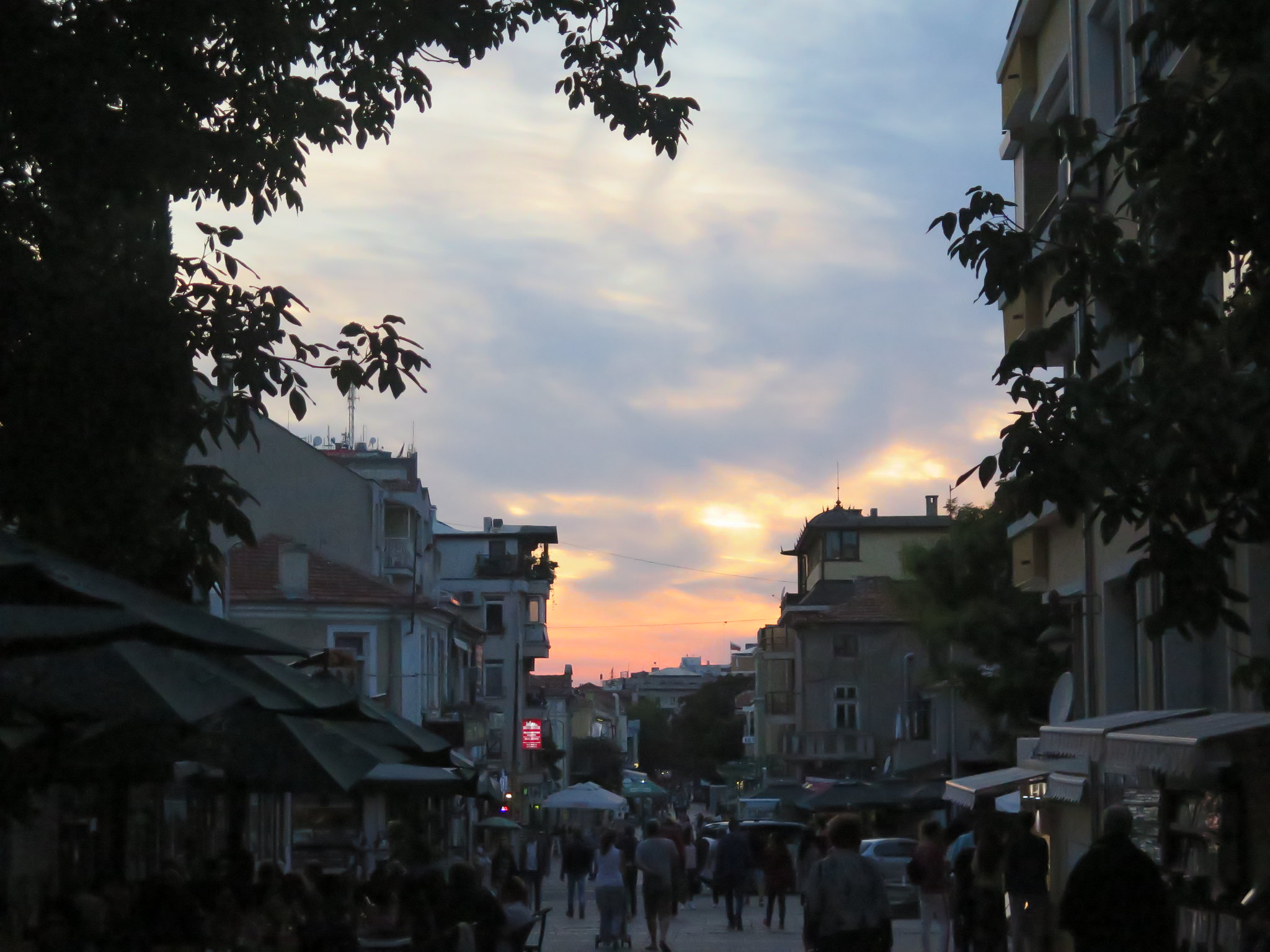 Next time, exploring the coast around Burgas!