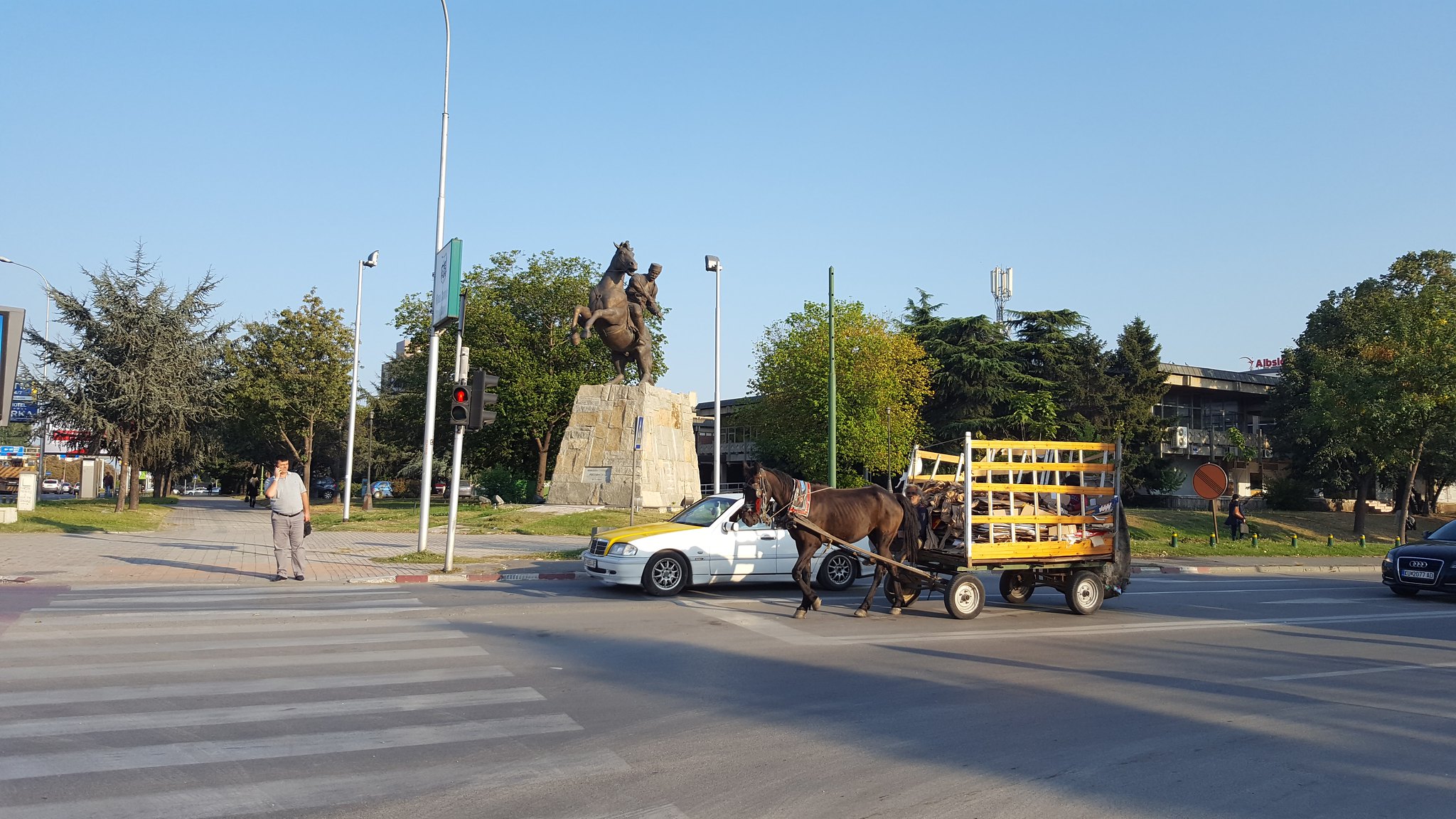 Our few days in Skopje were over, and our next steps were to bus over to Bosnia. We had read that there were fairly frequent busses running between the cities so it shouldn’t have been a problem. The first sign that maybe we chose the wrong method of transit was the friendly lady manning the ticket counter at the station explained that the only buses out were on Wednesday and Sunday at 8 pm and would take about 10 hours. We bought our tickets for the Wednesday bus. Overnights aren’t usually a problem, and we’ve done our fair share of them so far. 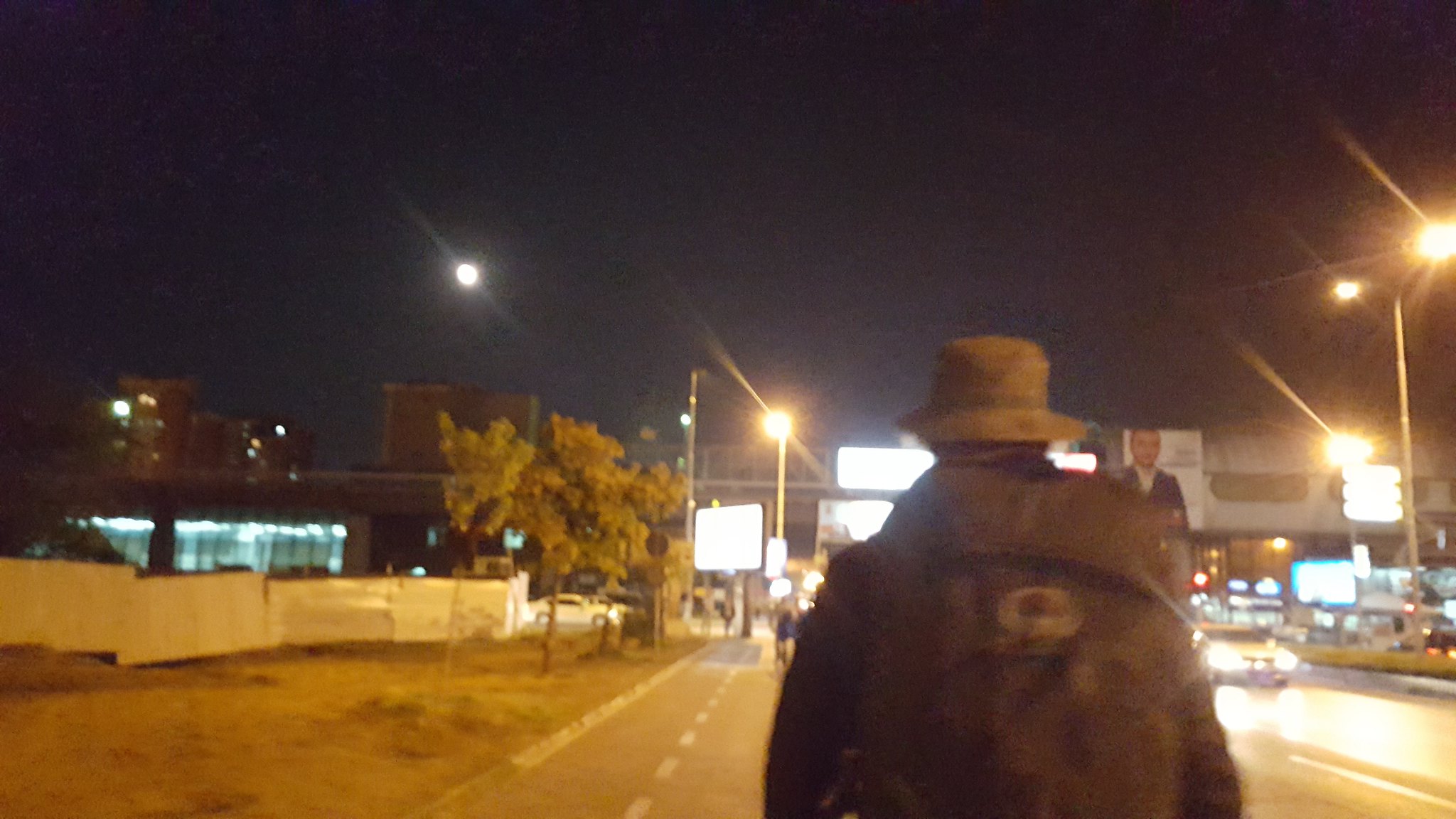 The streetlight lit walk back to the station – mercifully short with all of our gear. 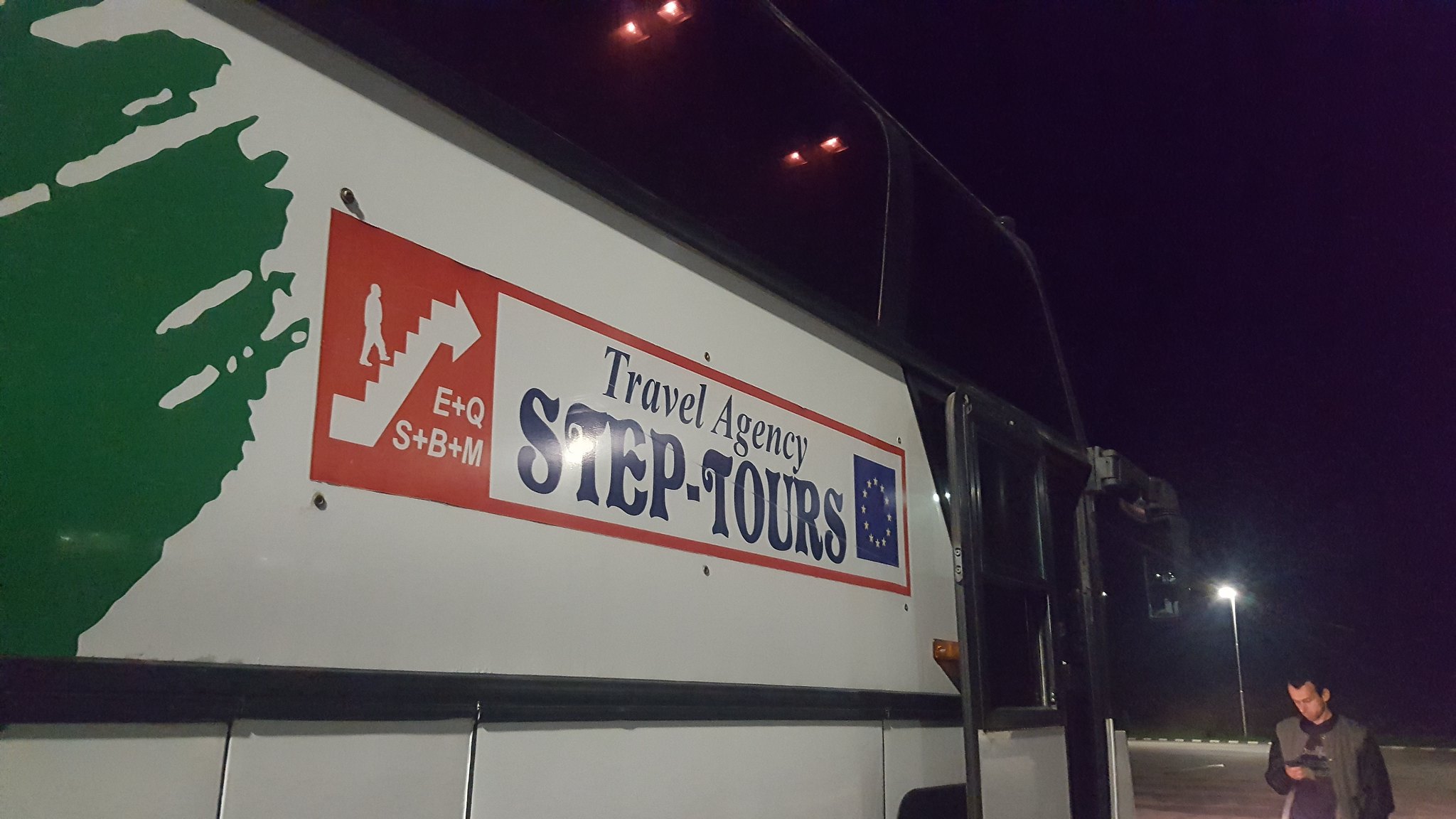 It seemed like a normal economy bus line. We were early to try and get a decent seat for my legs – the buses in eastern Europe are a bit cramped. 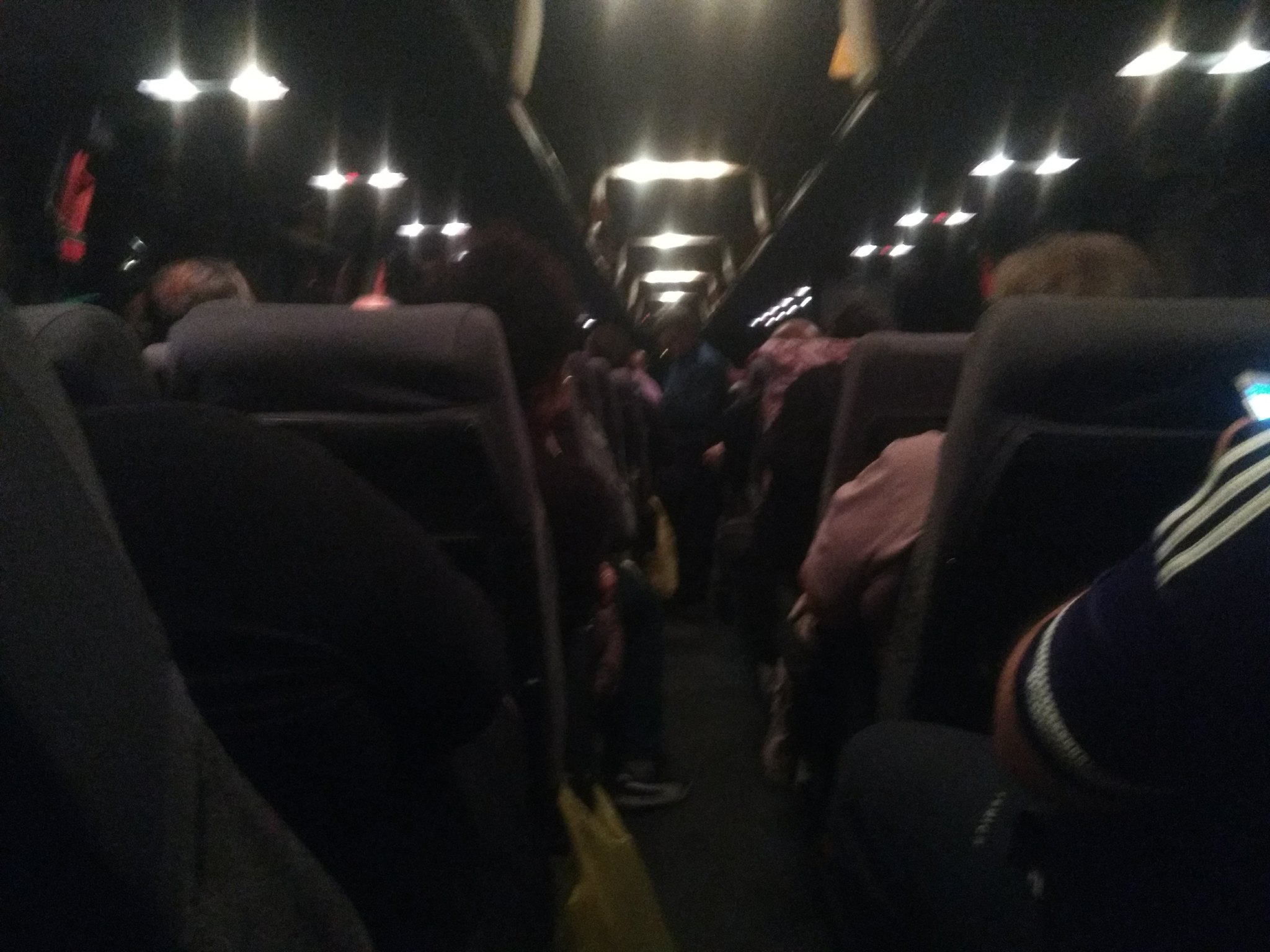 Our bags below and the bus full, we take off. A man in front of us to the left was very friendly and told us all about his adventures hiking in Bulgaria, the mountains he’d climbed, and the state of the local soccer clubs. He was on his way to Sarajevo for a match – something he said he does fairly frequently. 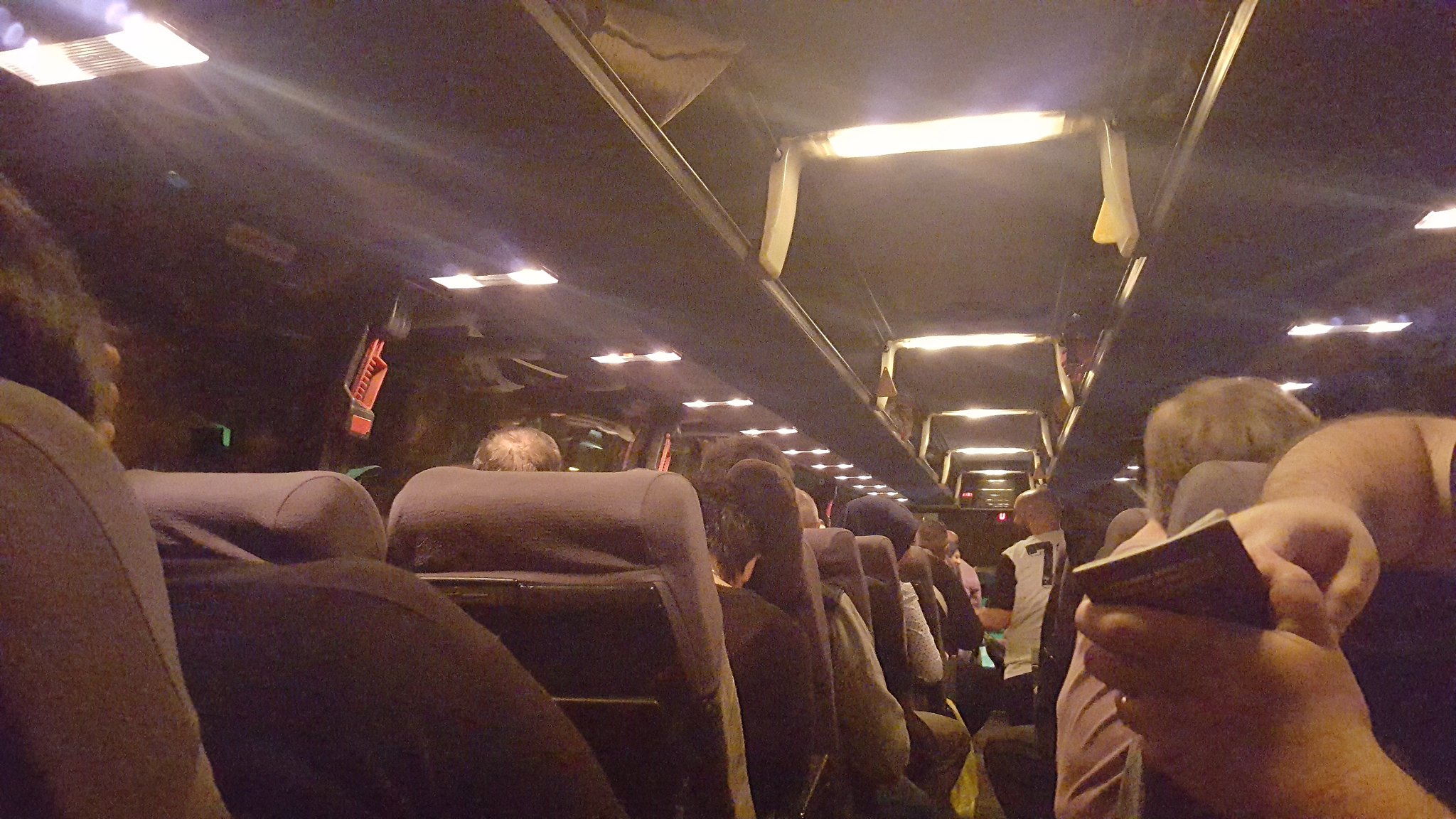 They gather up our passports in anticipation of the border crossing. 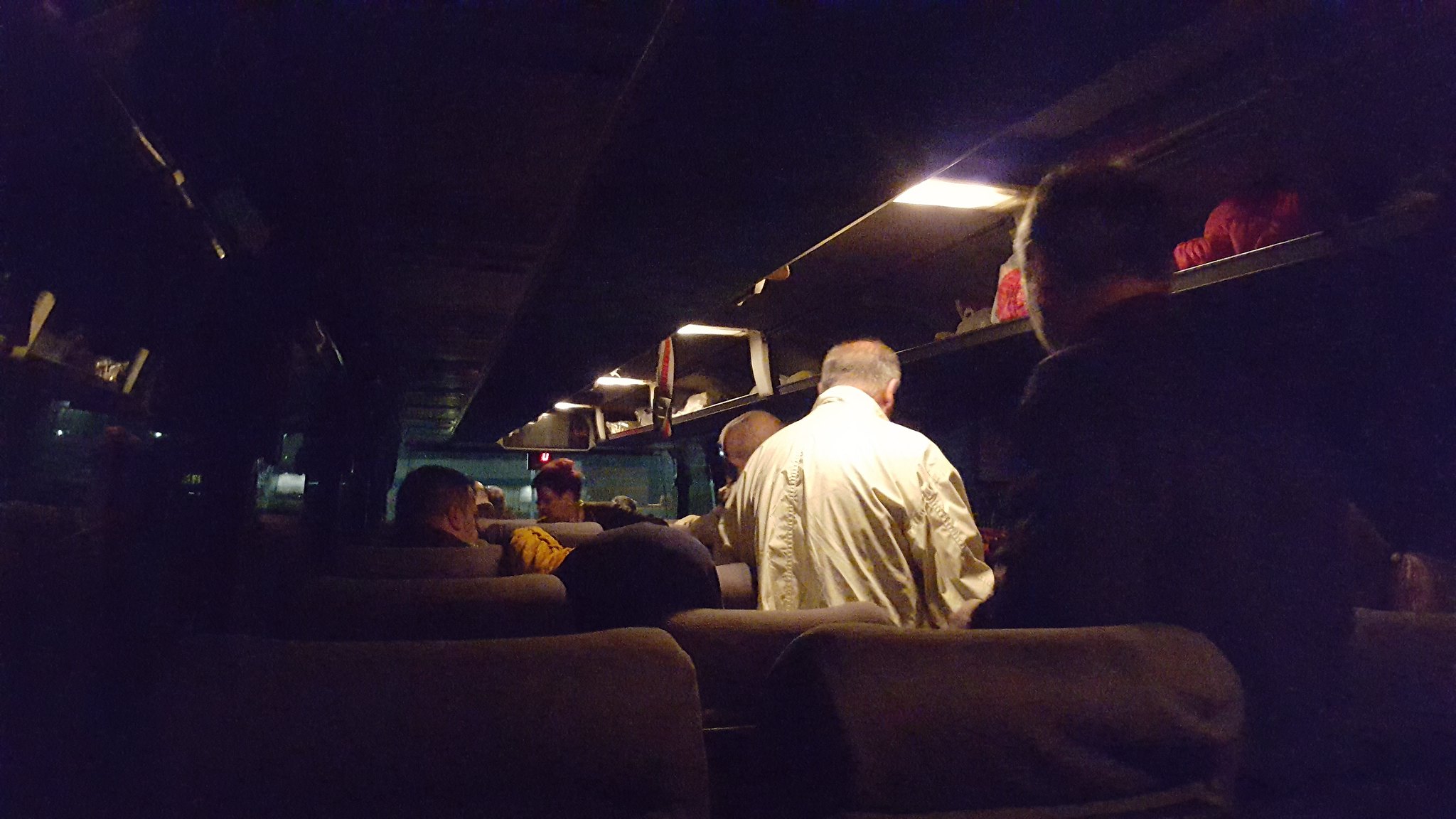 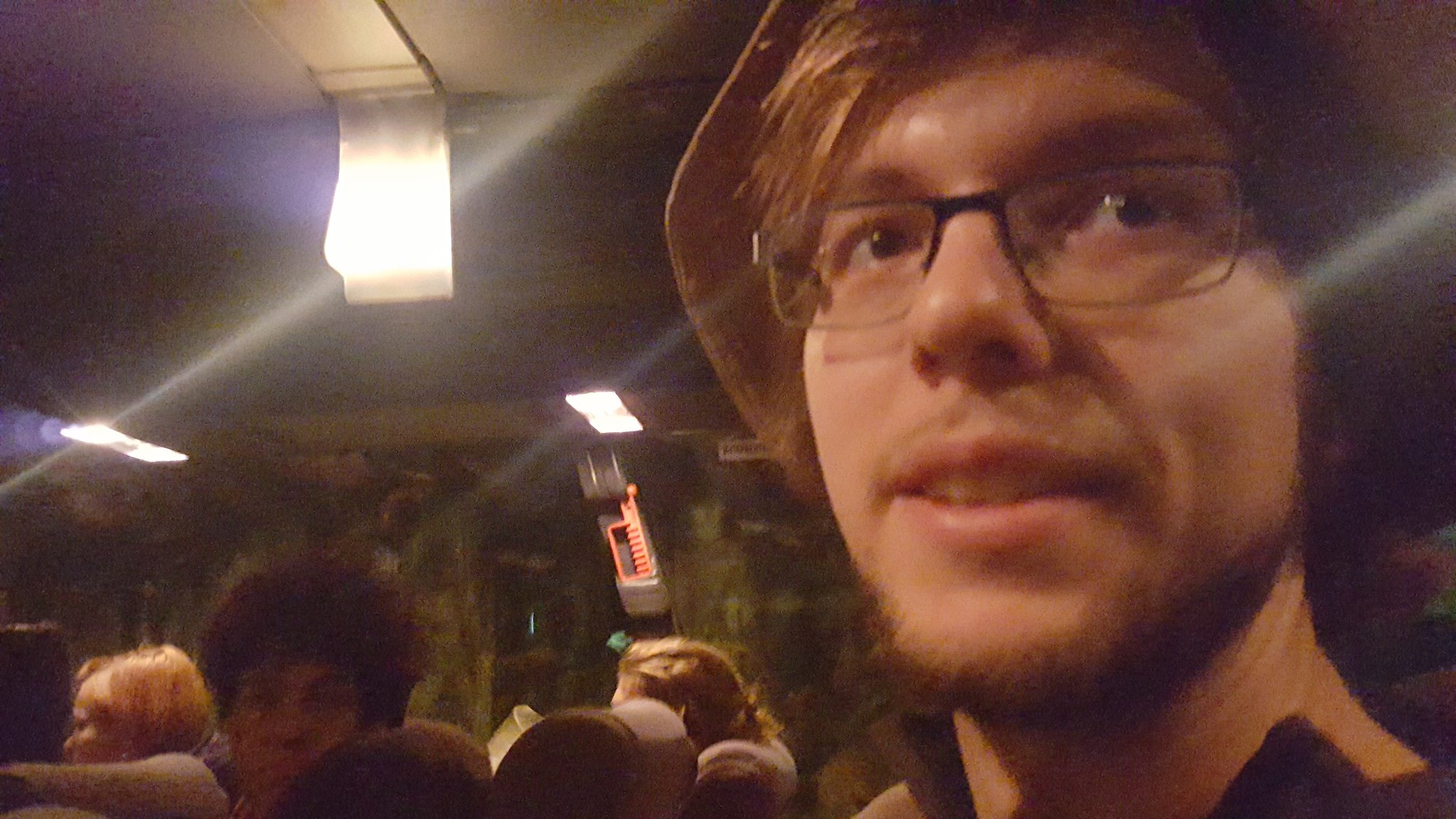 Shortly thereafter, the conductor comes back to us and asks us to move. This we learn in loud tones and with help from our soccer fan friend. It’s not entirely clear why, and since we weren’t told anything when we got on, we stay in our seats. An explanation comes out – the conductor, who is also the alternate bus driver, needs to sleep. Ok, somewhat reasonable. We agree to move and the conductor, realizing that we’re together, asks another lady to please move from her seat so that we can sit together instead of separately. We didn’t feel great about this, but it was nice to at least keep sitting together. The lady definitely did not feel great about this. 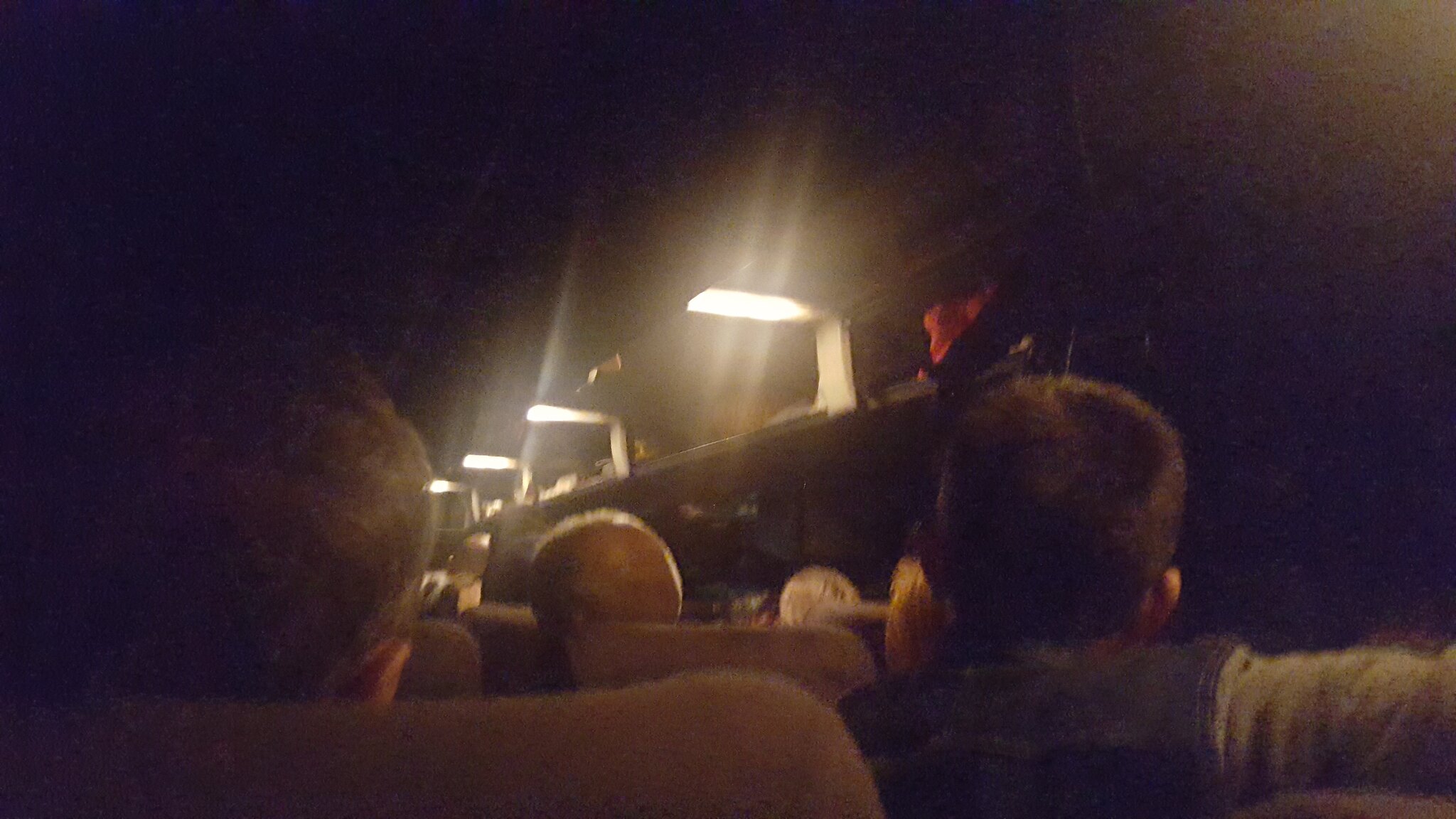 The scene that played out afterward could have been from any Three Stooges film. As everyone did their best to sleep, a noise started. A squeak that came in and out, sometimes louder, sometimes softer, never quite on any particular beat. It drove the sleeping conductor mad. Panels were pushed and examined, seats were raised, bags were shifted. The attempt to find the source of the noise was in vain. Finally, after several passengers helped in the search, someone stuffed a blanket between two roof panels near the back seat. It didn’t solve the noise, but everyone involved felt like something had been done, so it was time to try sleeping again. 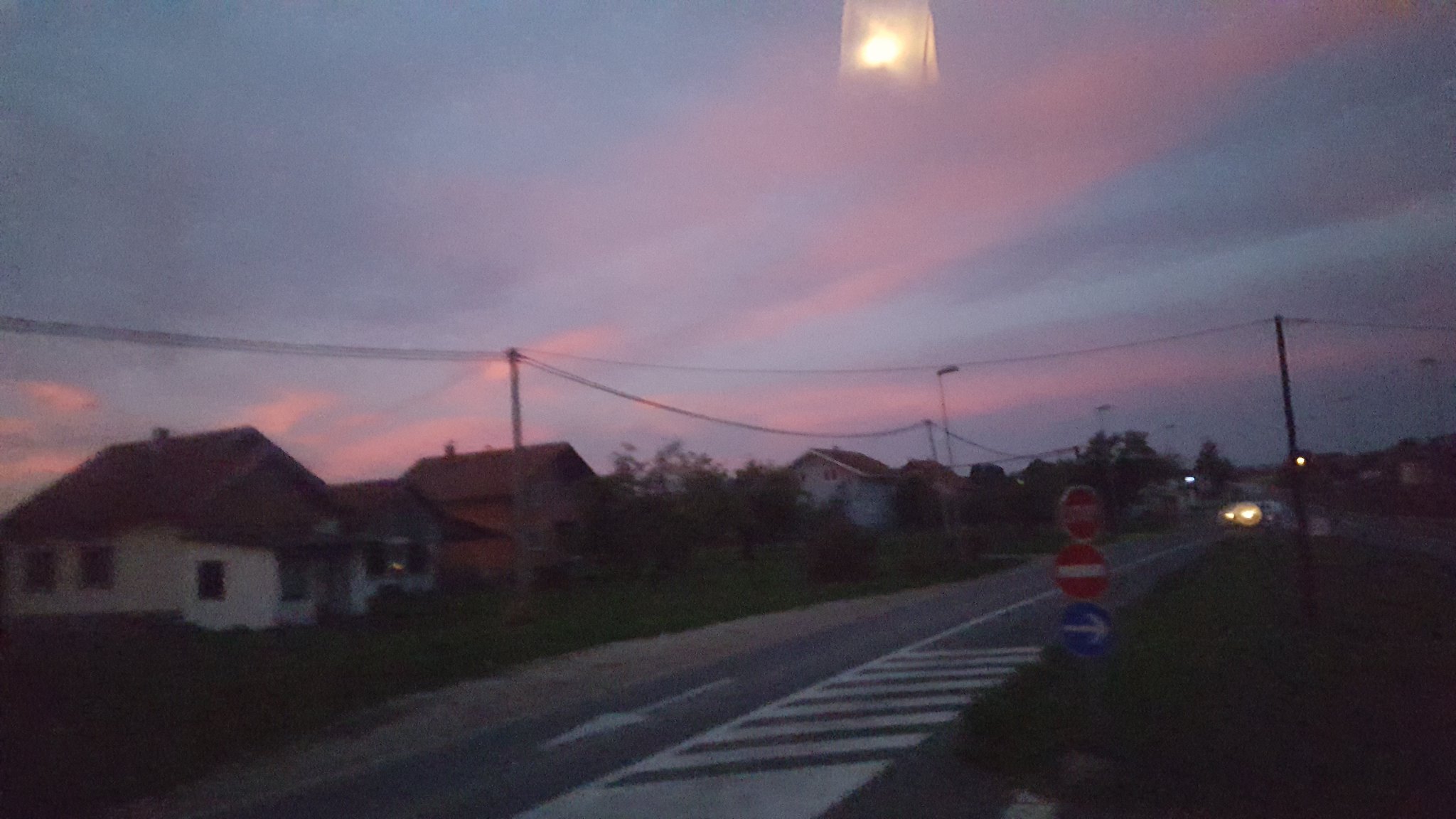 Dawn came, and whatever kind of rest we can get on a bus was gotten. All told not too bad. 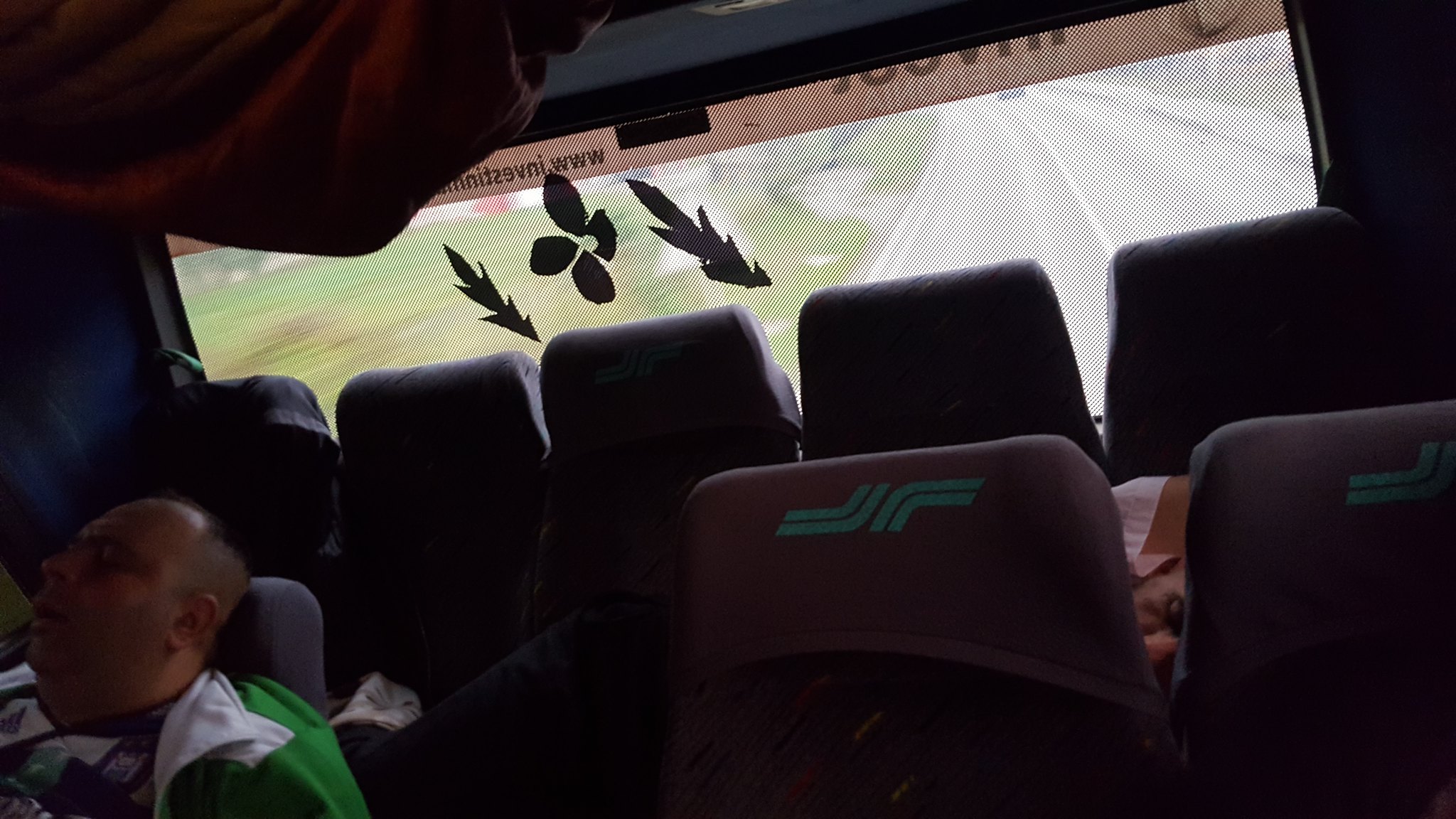 Our conductor and football friend slept on. 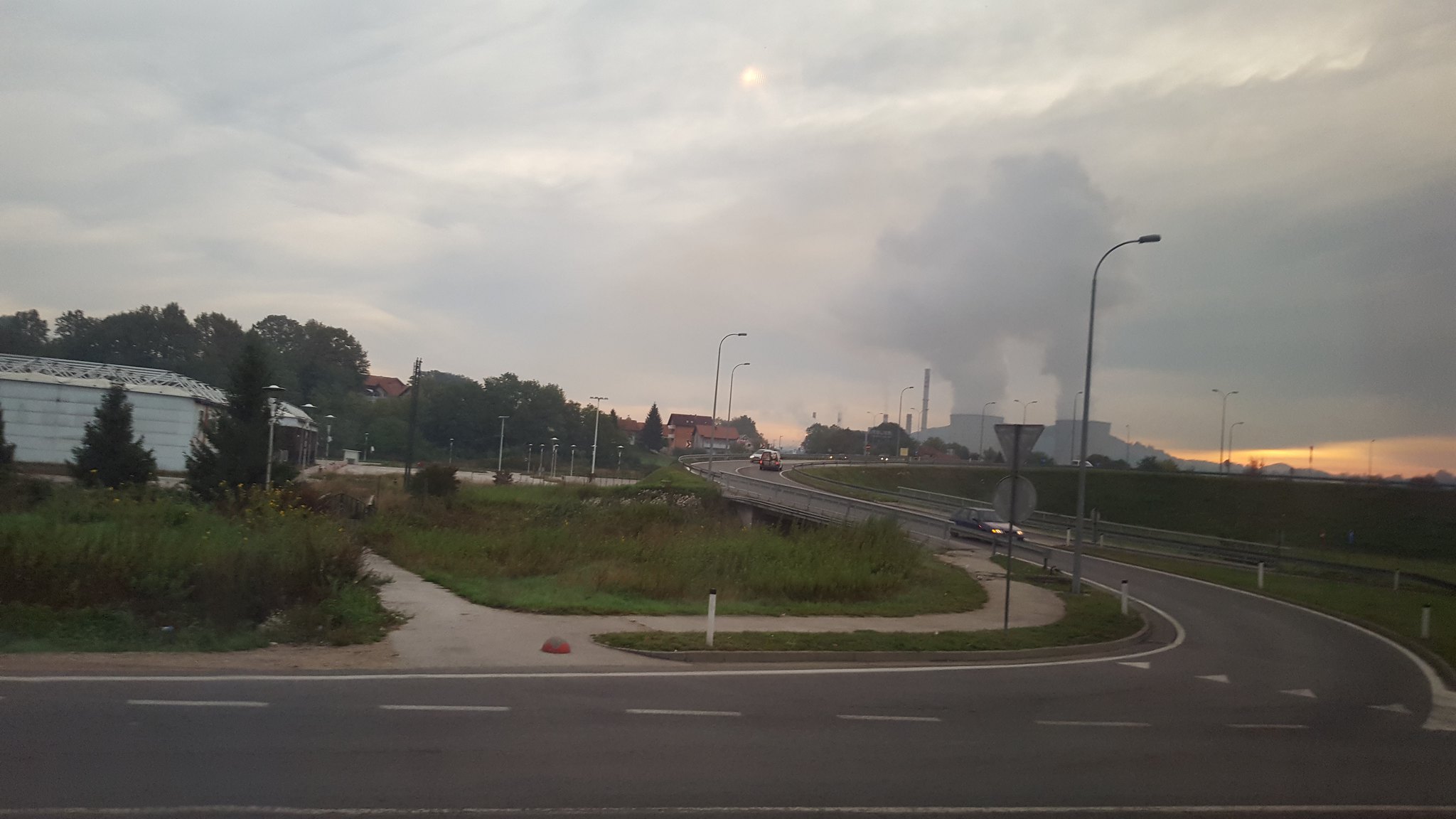 Outside, the Bosnian landscape went by. We had passed through Serbia in the middle of the night. Oddly I don’t remember crossing the border into Bosnia, but Natalie does. She remembers it as being very, very cold, at around 4am. 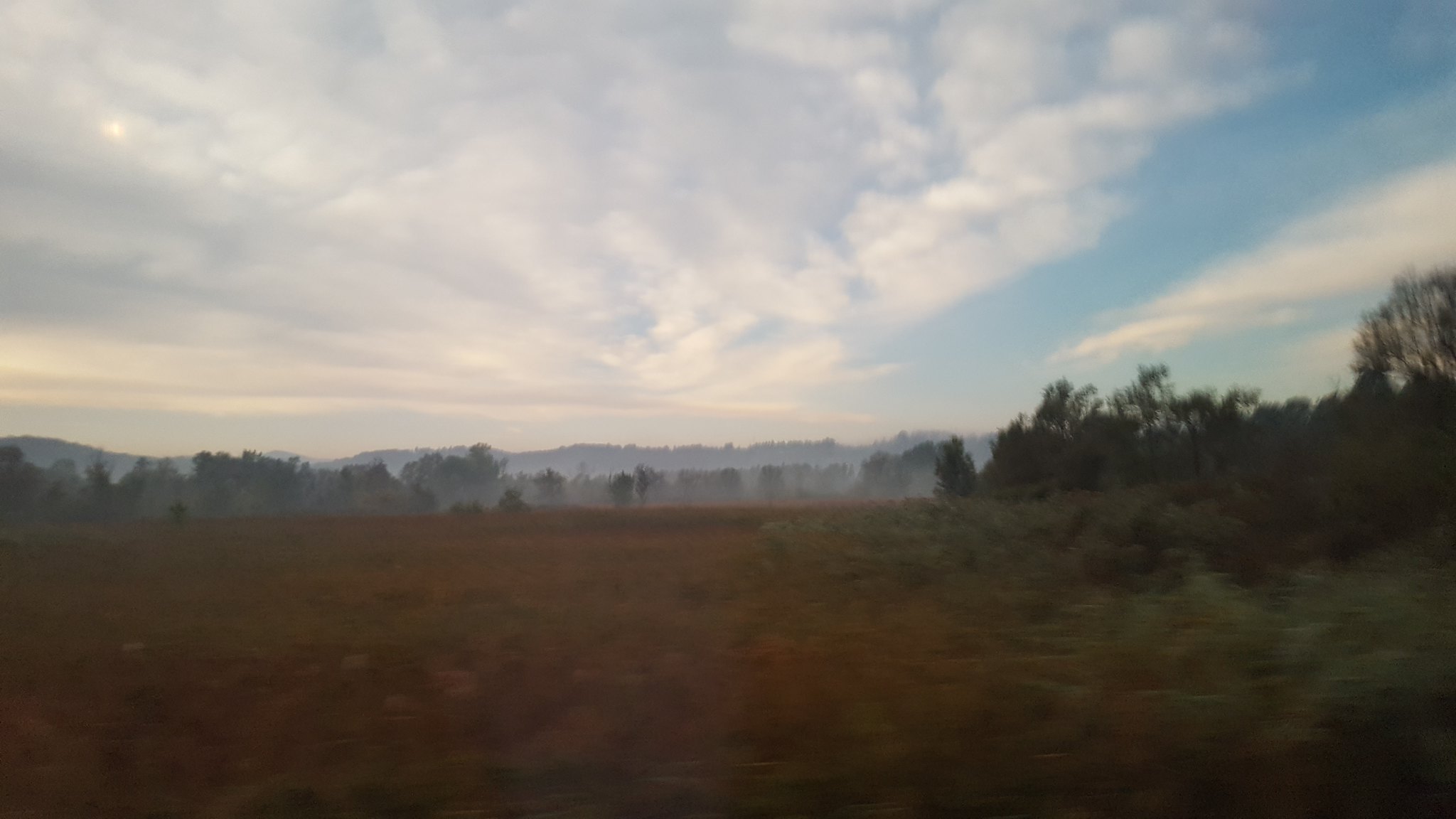 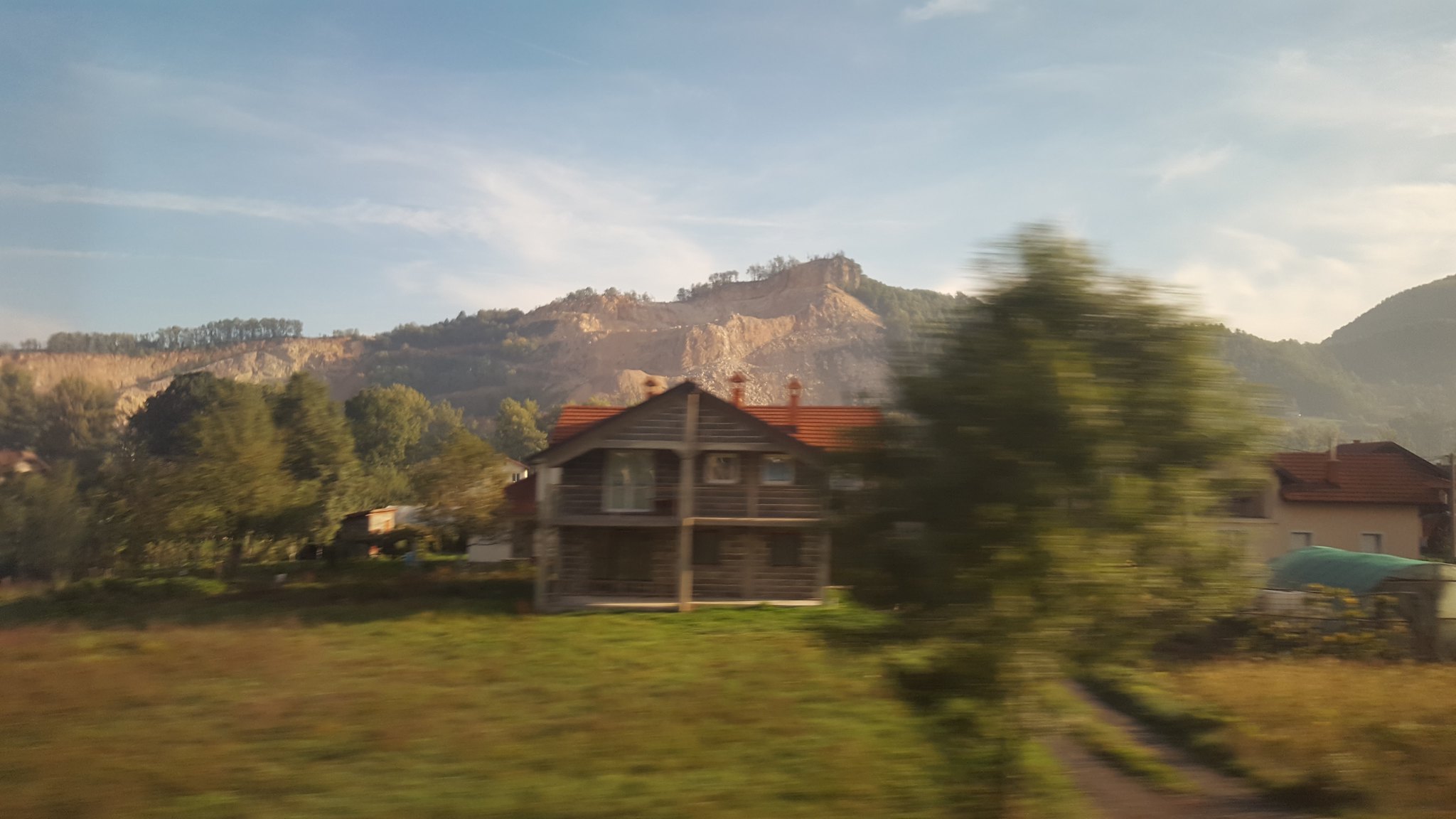 Several hours of sunrise follow. The landscape and scenery is really quite pretty. 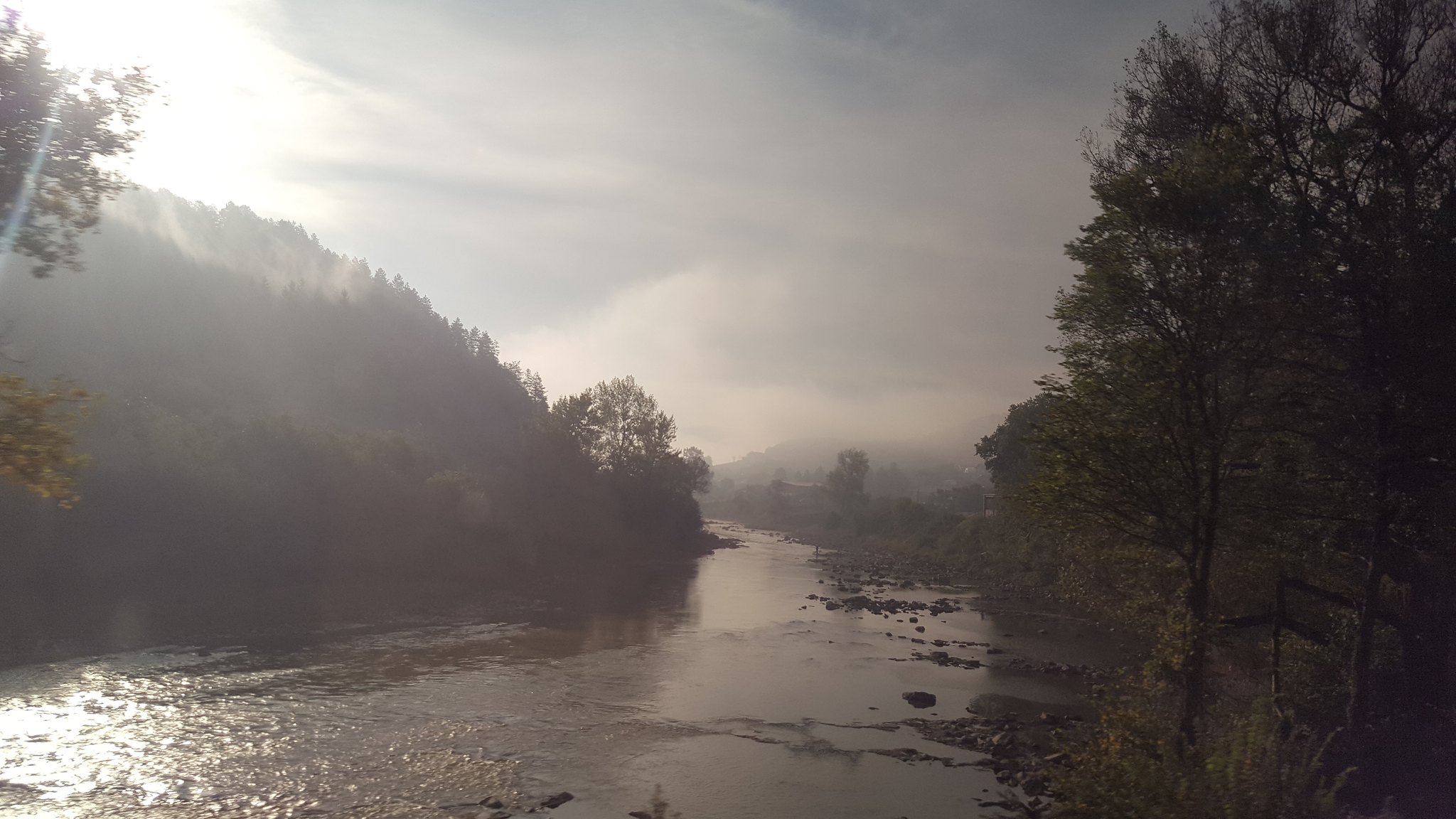 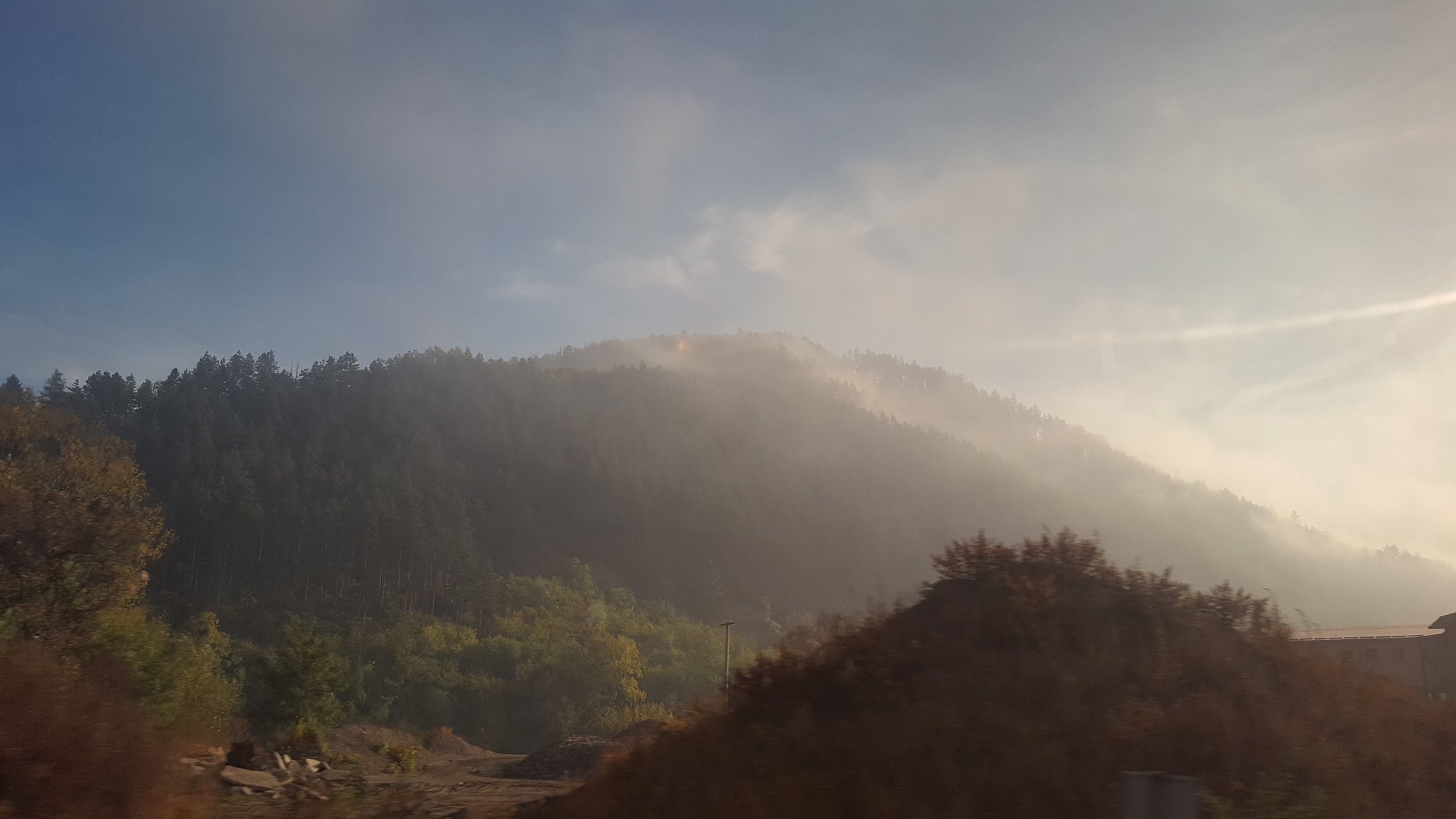 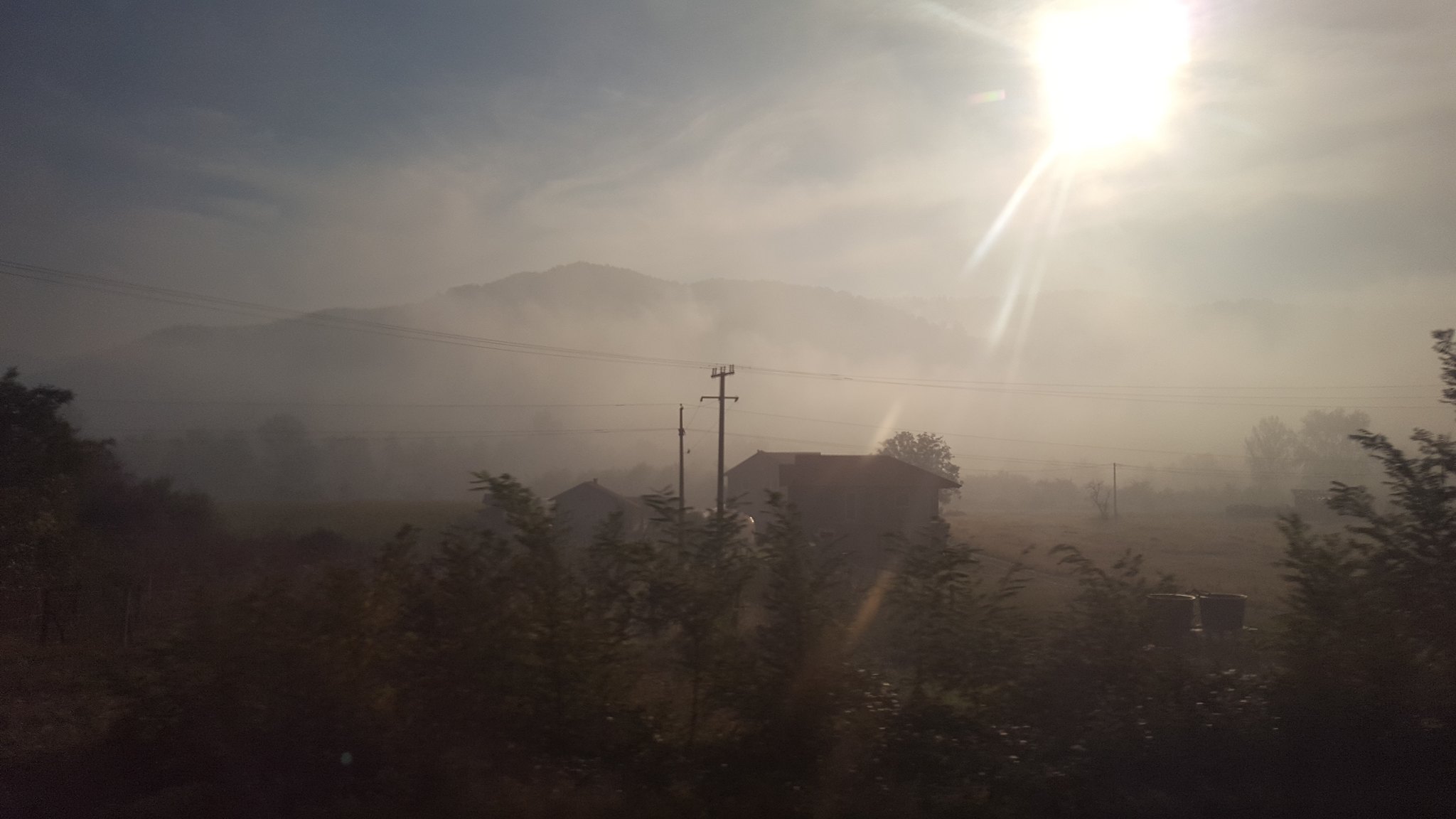 Finally, sometime early in the morning, we get let off at a restaurant/bus stop. 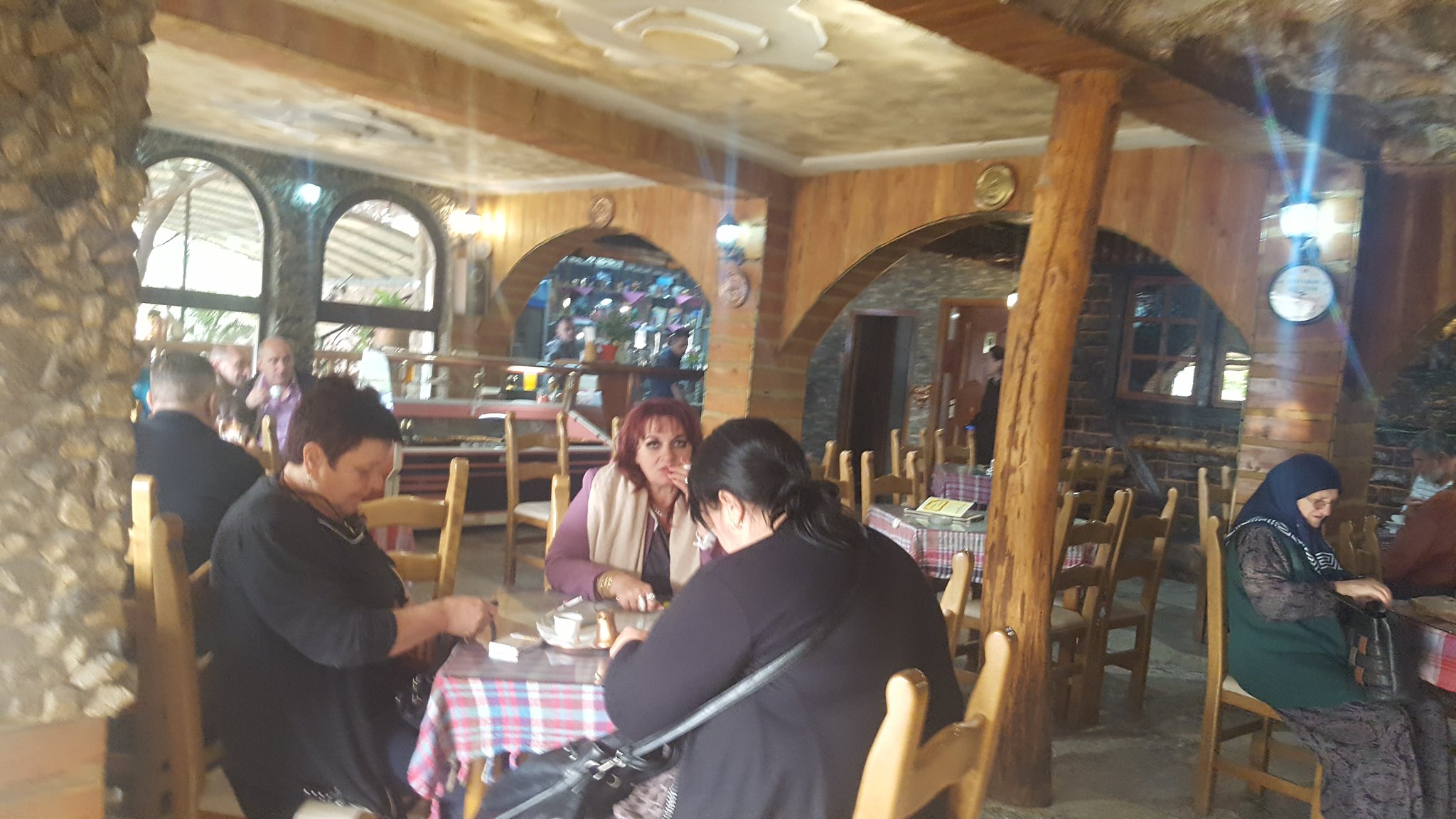 Bathrooms are first priority. After that I go to browse the snacks and food available. It turns out they only accept Bosnian currency, and only in cash. As a point of interest it’s nearly impossible to get Bosnian currency anywhere except inside the country, and there are no ATMs nearby. We dig in to what’s left of our travel snacks. 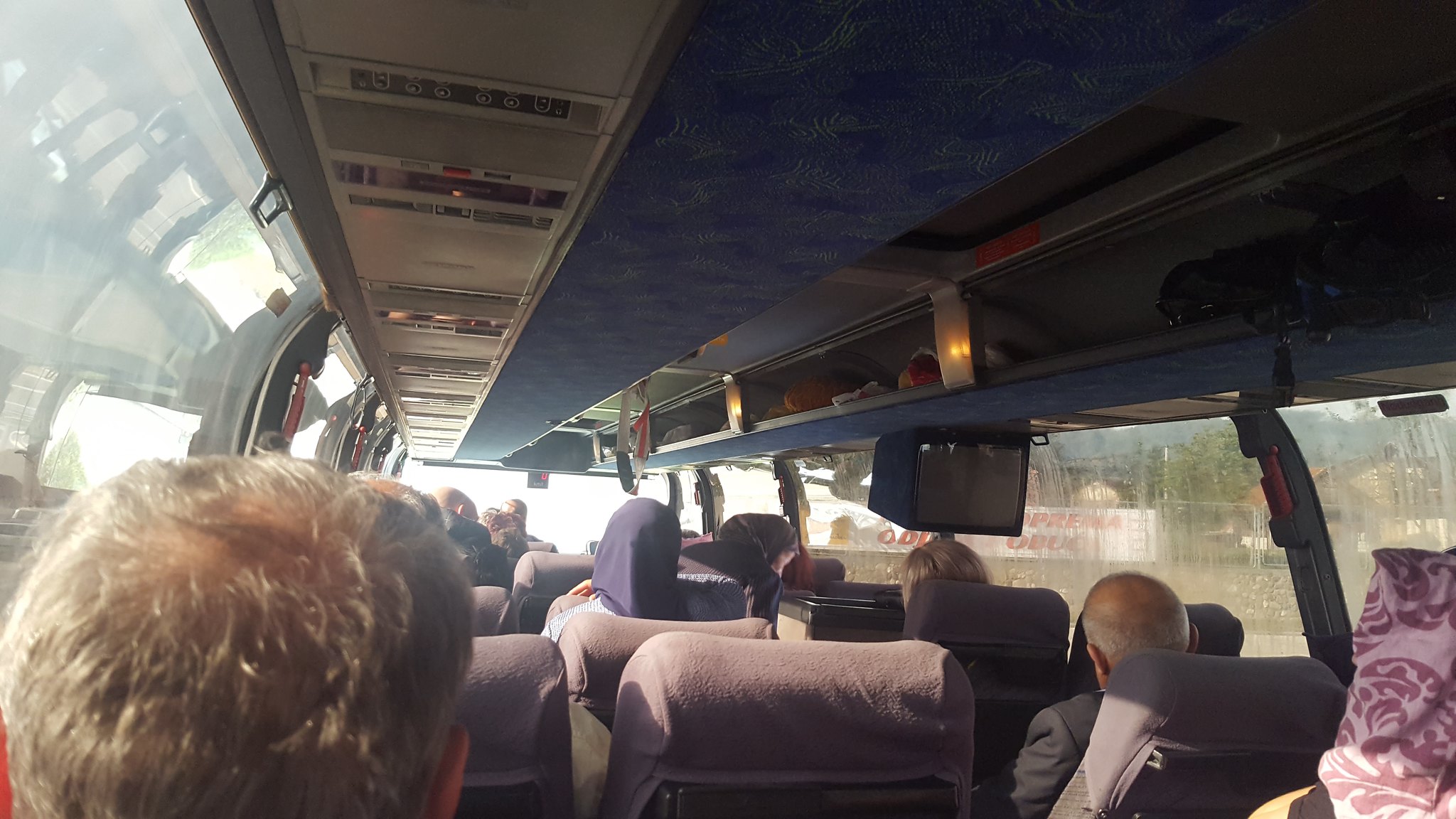 The bus ride at this point continues on. We had been pretty firmly told that it would be 10 hours. Well, actually 12 hours corrected the driver mid way. Actually, the trip ran on for more than 15 hours. The internet confirms this is about the time it takes, but nobody on the ground was giving that number. 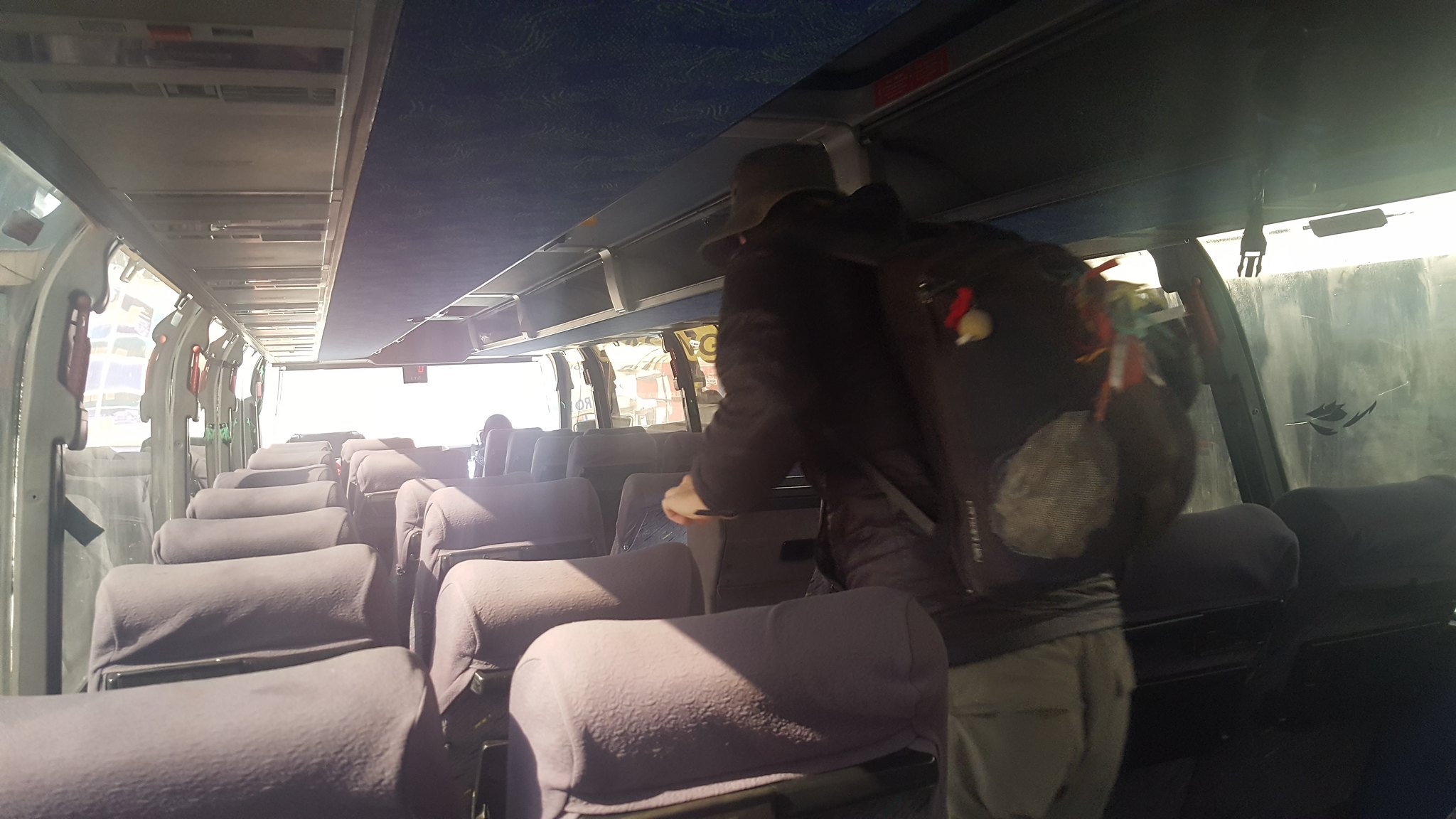 It’s time to get off the bus! 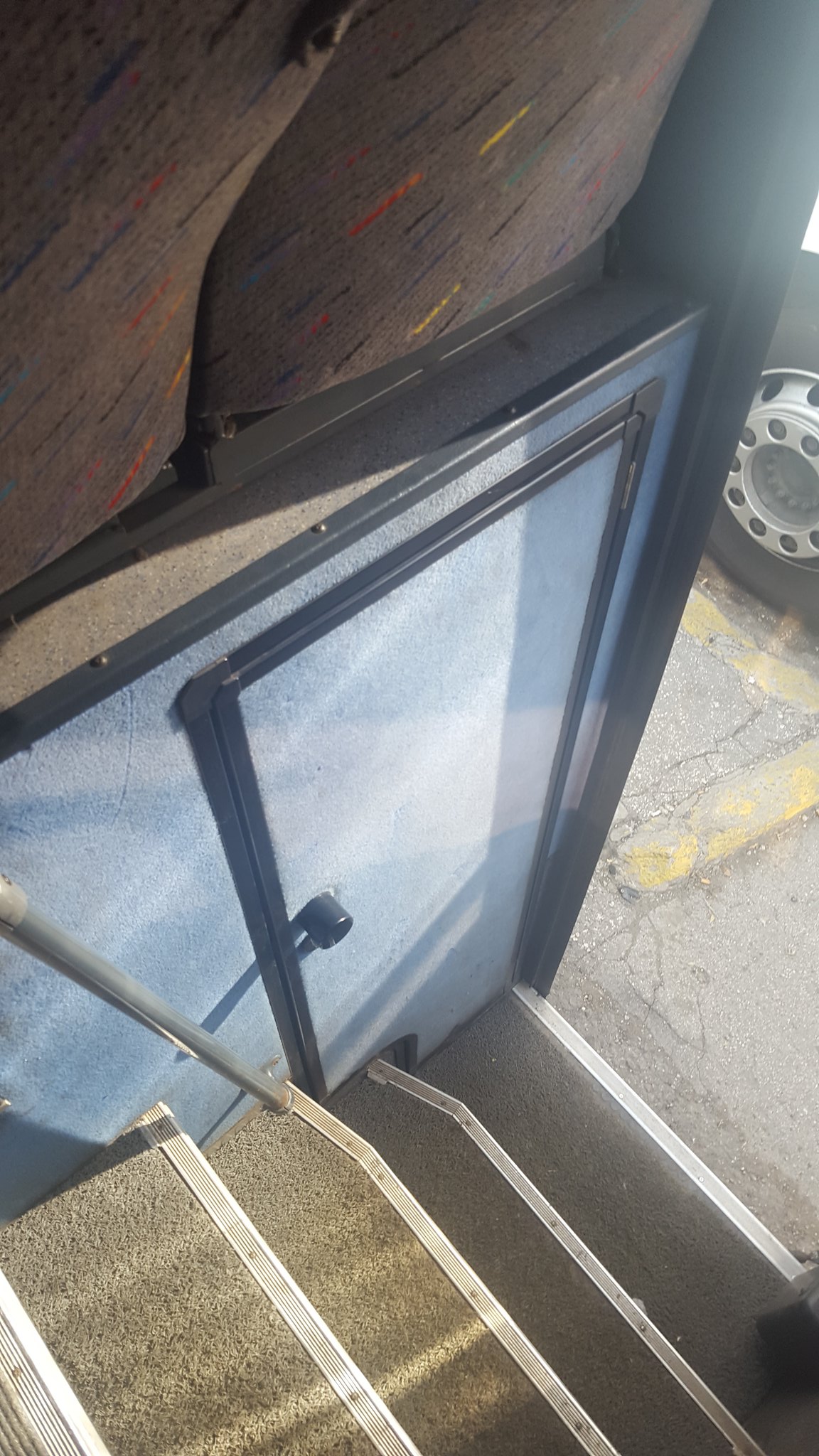 Natalie took this picture at the moment of her escape. We would later discover that sadly, her crocheted orange owl had stayed on the bus, its loop snapped off when the bag was jammed under the seat during our seat change. 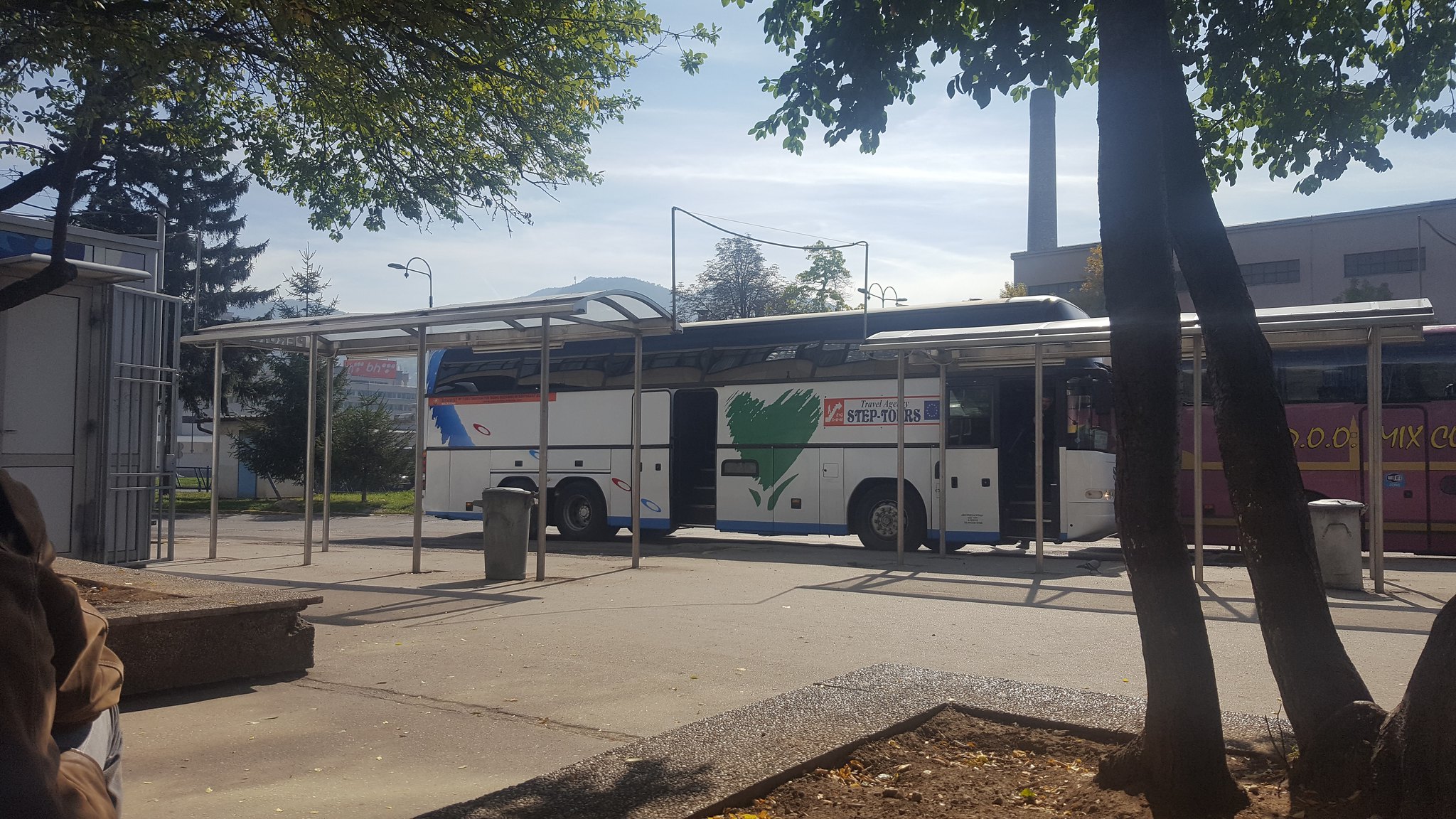 One last look at our bus.. 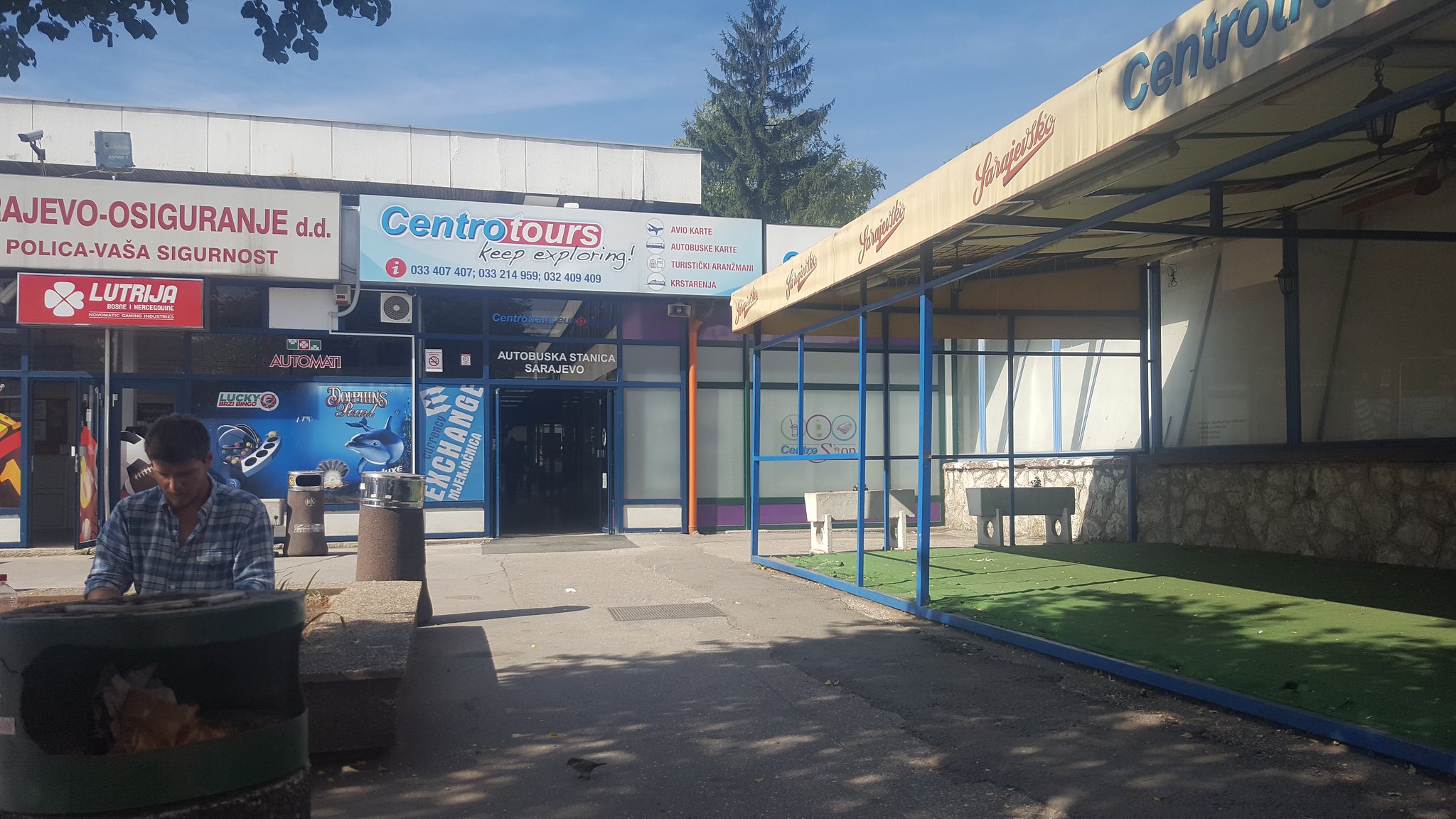 Sweet freedom! The station had an ATM, and a bakery. Bosnia has amazing baked goods, and extremely nice people. The lady at the bakery very kindly took my 50 mark to pay for a 3 mark piece of pie. It’s like buying a stick of gum with a hundred dollar bill. Change and food in hand, we got on the metro system and headed to our hostel!

One thought on “Skopje to Sarajevo – a terrible bus ride”