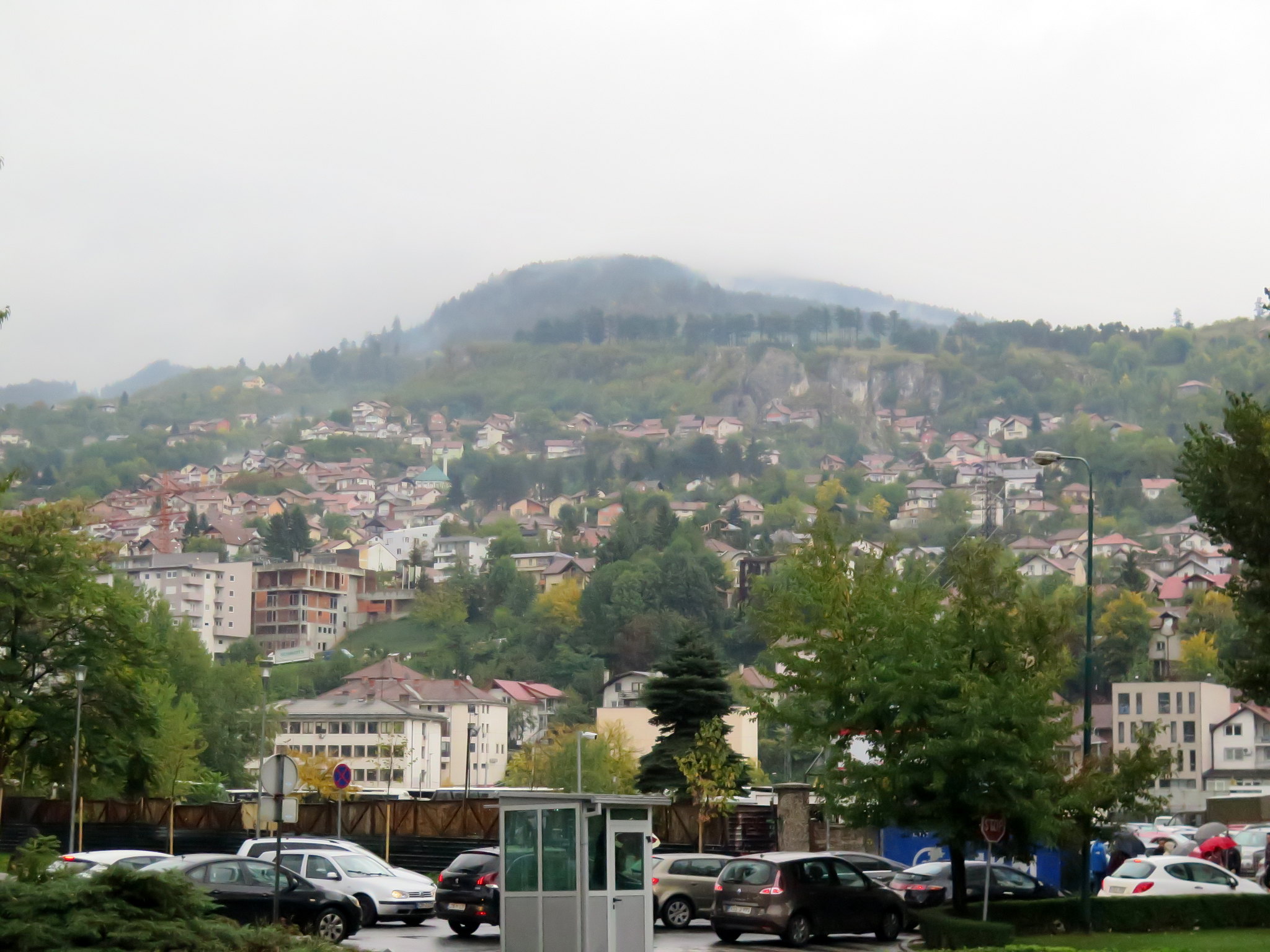 On the surface, Sarajevo should be like most other Eastern European cities – a mix of Turkish and Russian influence, torn up sidewalks, and crumbling facades. And it certainly does have some (or more) of all of those. Throw in the historical perception of a recent war, and you have a city that shouldn’t be great to visit. Yet it doesn’t feel like a Eastern European city – it feels different, somehow more modern. And as for the war, it’s not forgotten by any means and signs of it are everywhere, but the people are in the middle of moving on and building new lives and a new city. Sarajevo’s history is complicated and violent, and I’m not qualified to say how it got to where it is now, but as a visitor, I can with certainty say I would love to come back. 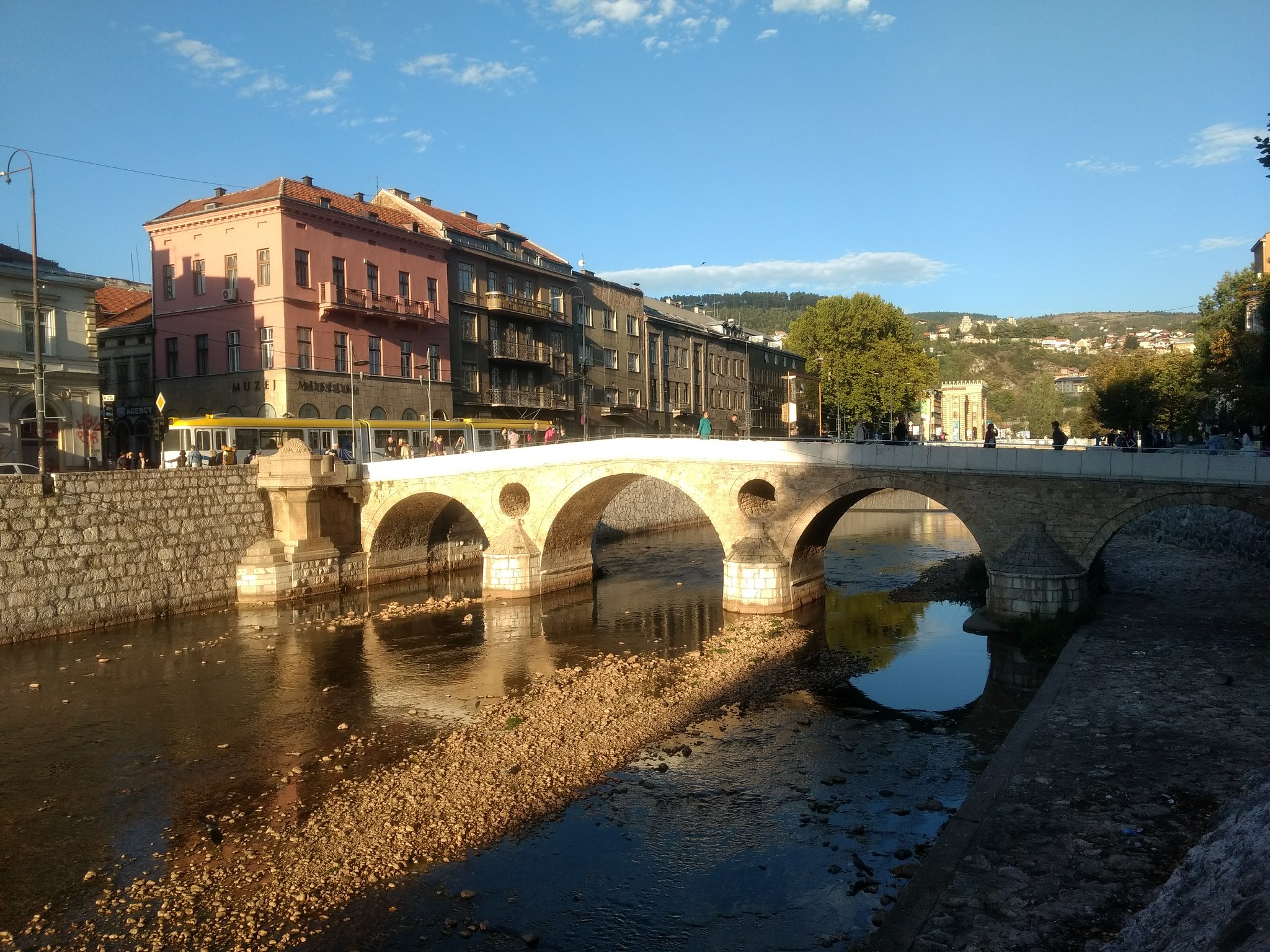 Our first impression of Sarajevo was that the people here are very warm and welcoming.  We felt immediately at home and despite hosteling near the old city, did not feel any sense of being in a tourist trap. Our second impression was of the food. It’s delicious, it’s everywhere, and – at least as a tourist on a budget – it’s not very expensive. The historic section of the city is where we ate most of our meals, so everything was fairly traditional. Bosnian food has a huge helping of Turkish influence, lots of Mediterranean spices in their meat, and an appreciation for delicious dough. My favorite was sac – pronounced sach. 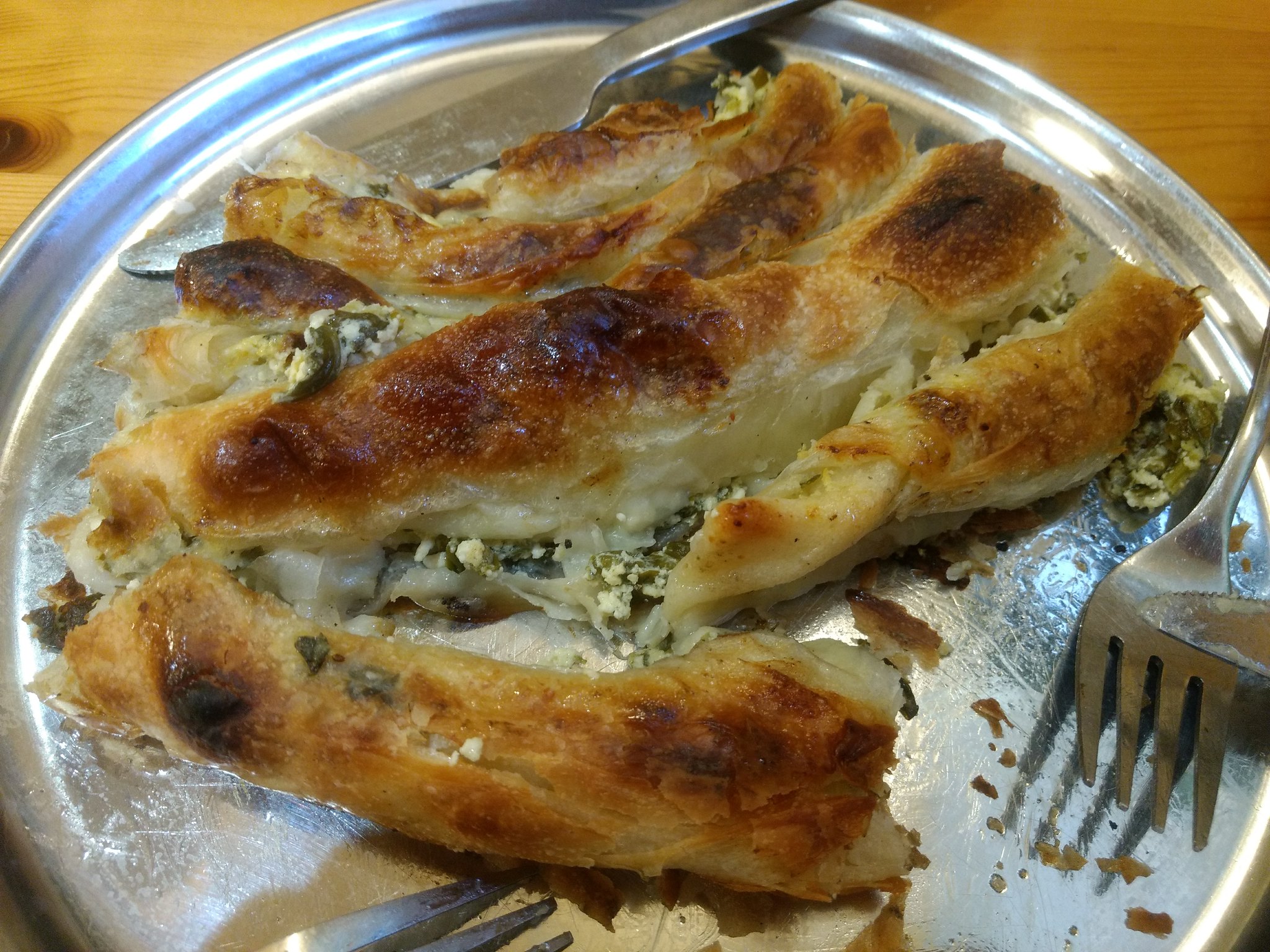 It’s basically banitsa, or buyrek, or any other thin dough wrapped around a delicious filling then baked. But the ones we had – several times – were cooked so that despite being baked, the inner layers came out as though steamed. Absolutely delicious and oddly very reminiscent of the Siberian boozi. 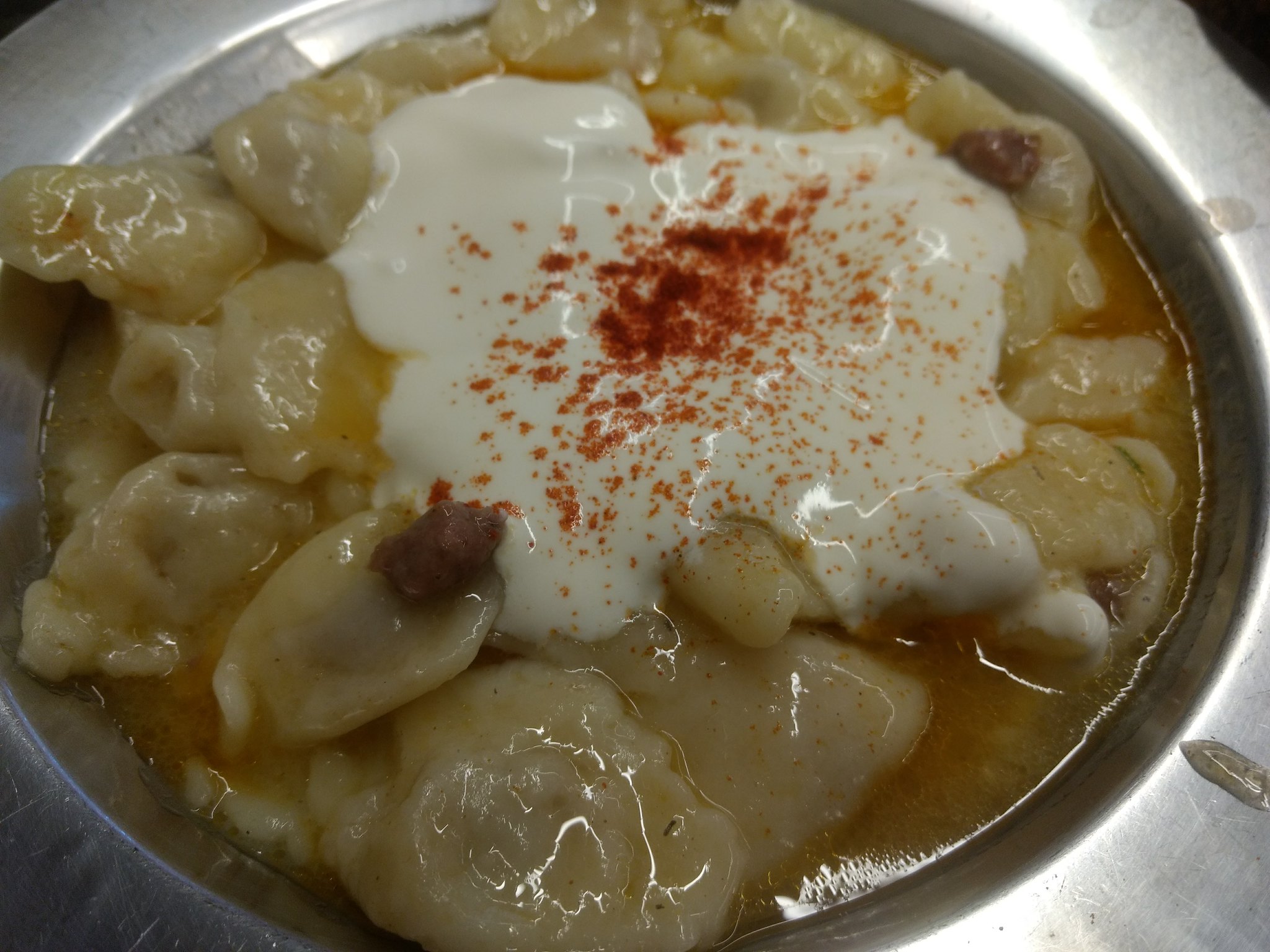 We also enjoyed a more traditional cafeteria-like restaurant in the old town, this one frequented by pensioners. Our meal there was varied but these dough-dumplings with meat were fantastic. 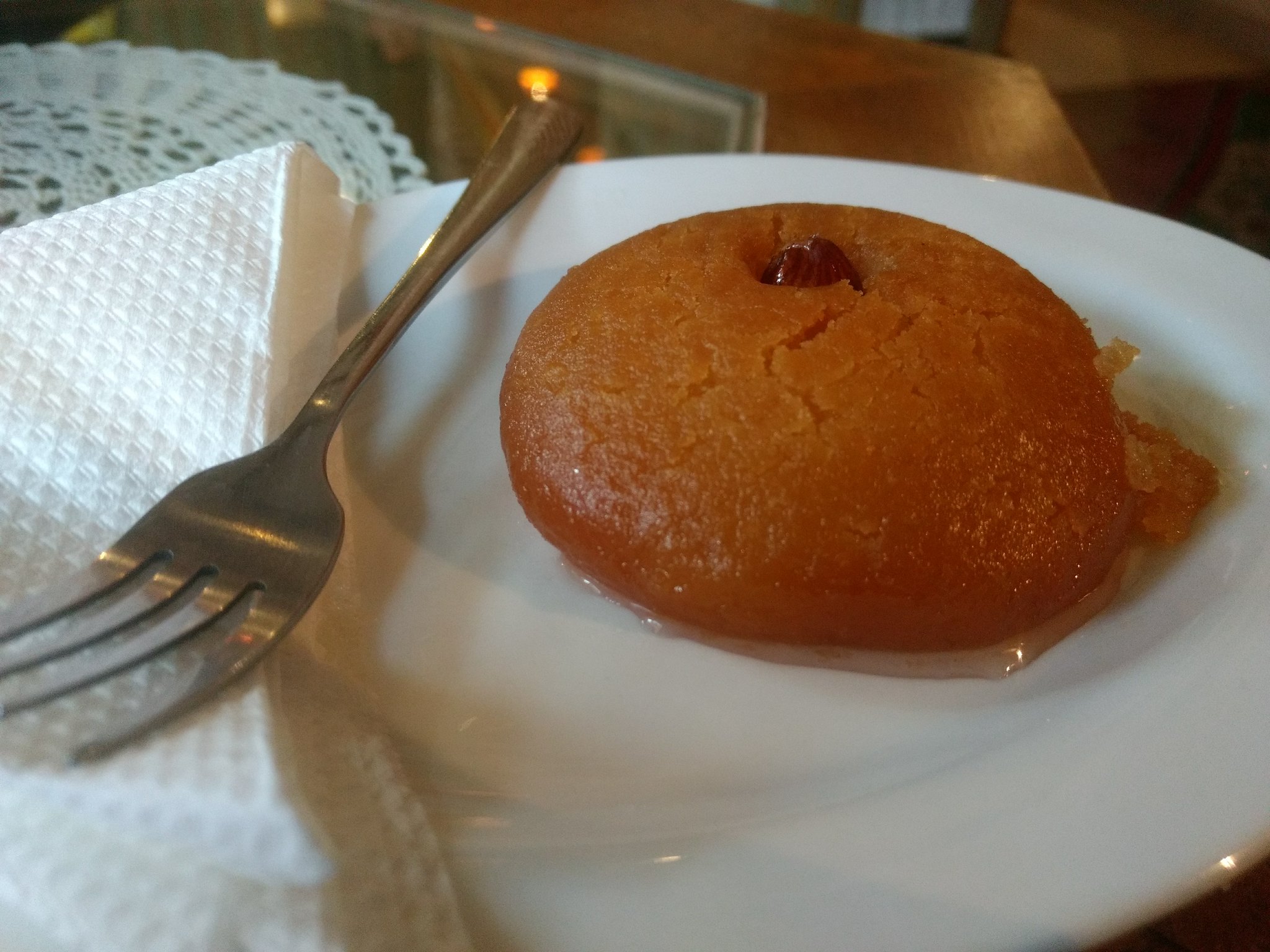 There are also several bakeries in the marketplace. All the desserts seem like variations on Turkish traditional recipes, but we unfortunately didn’t try each different one to know. This is the syrup-soaked semolina cookie that I’ve been lucky enough to try in three different countries so far – the bakeries in Sarajevo are some of the best! After the food comes the city’s architecture. Despite being under siege for almost four years and suffering untold structural damage, many of the historical sites came away relatively unscathed. 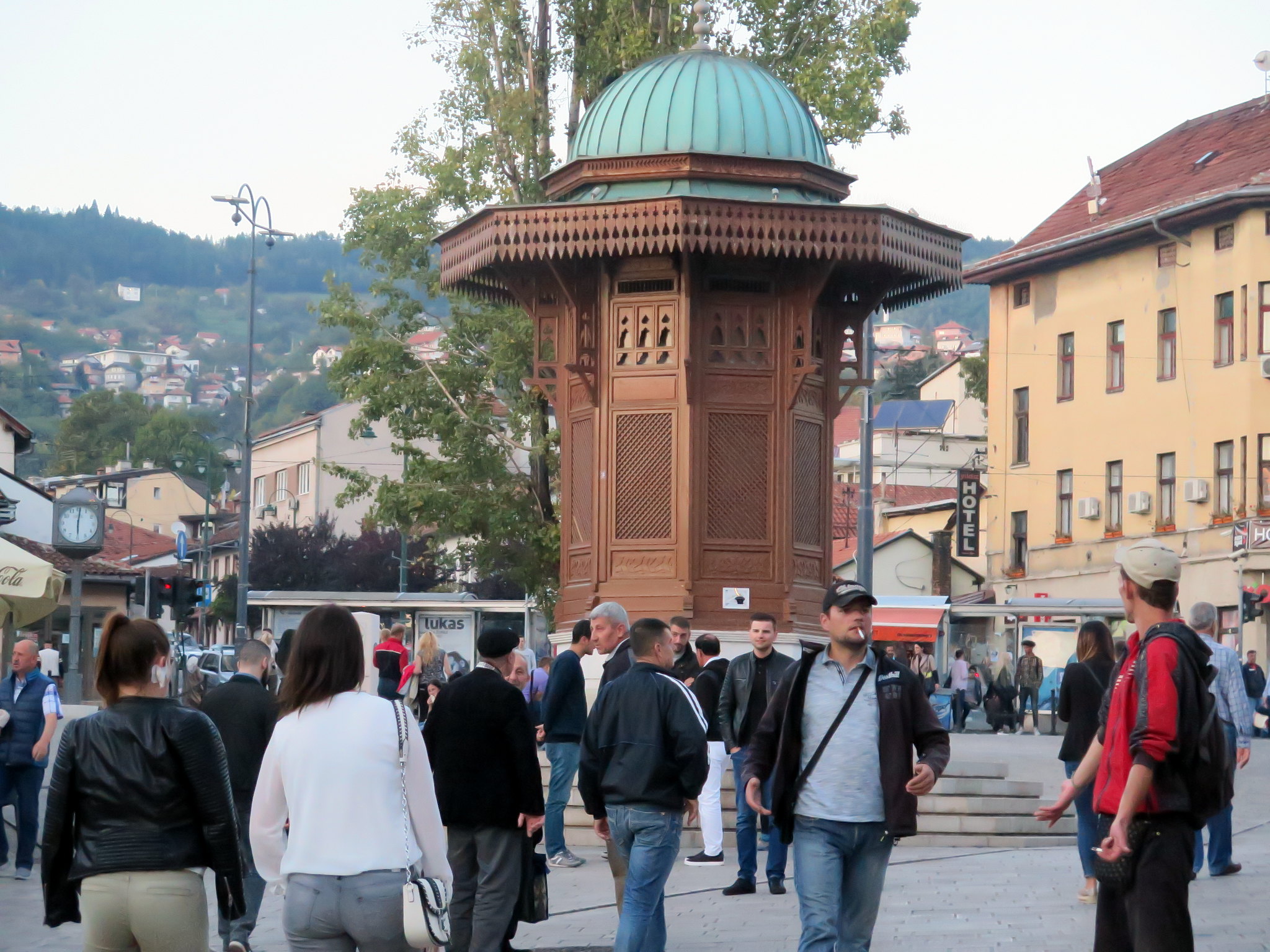 In the market place, the center of the old town, centuries old buildings and monuments still stand. 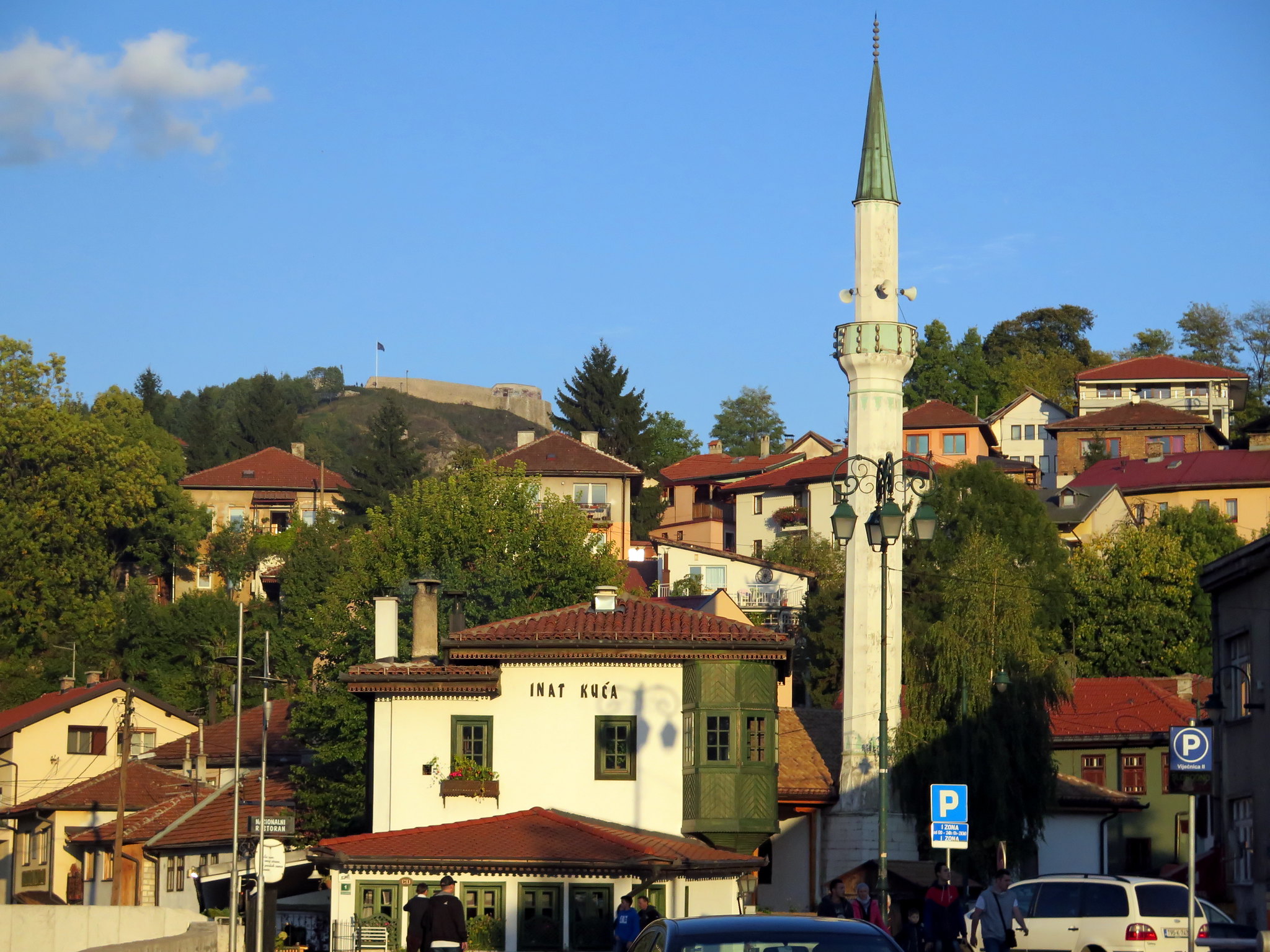 Walk out towards the river for a view like this one. Lovely old houses, minarets, and the surrounding hills. The river itself is bridged in many places, and each one makes for a great view. 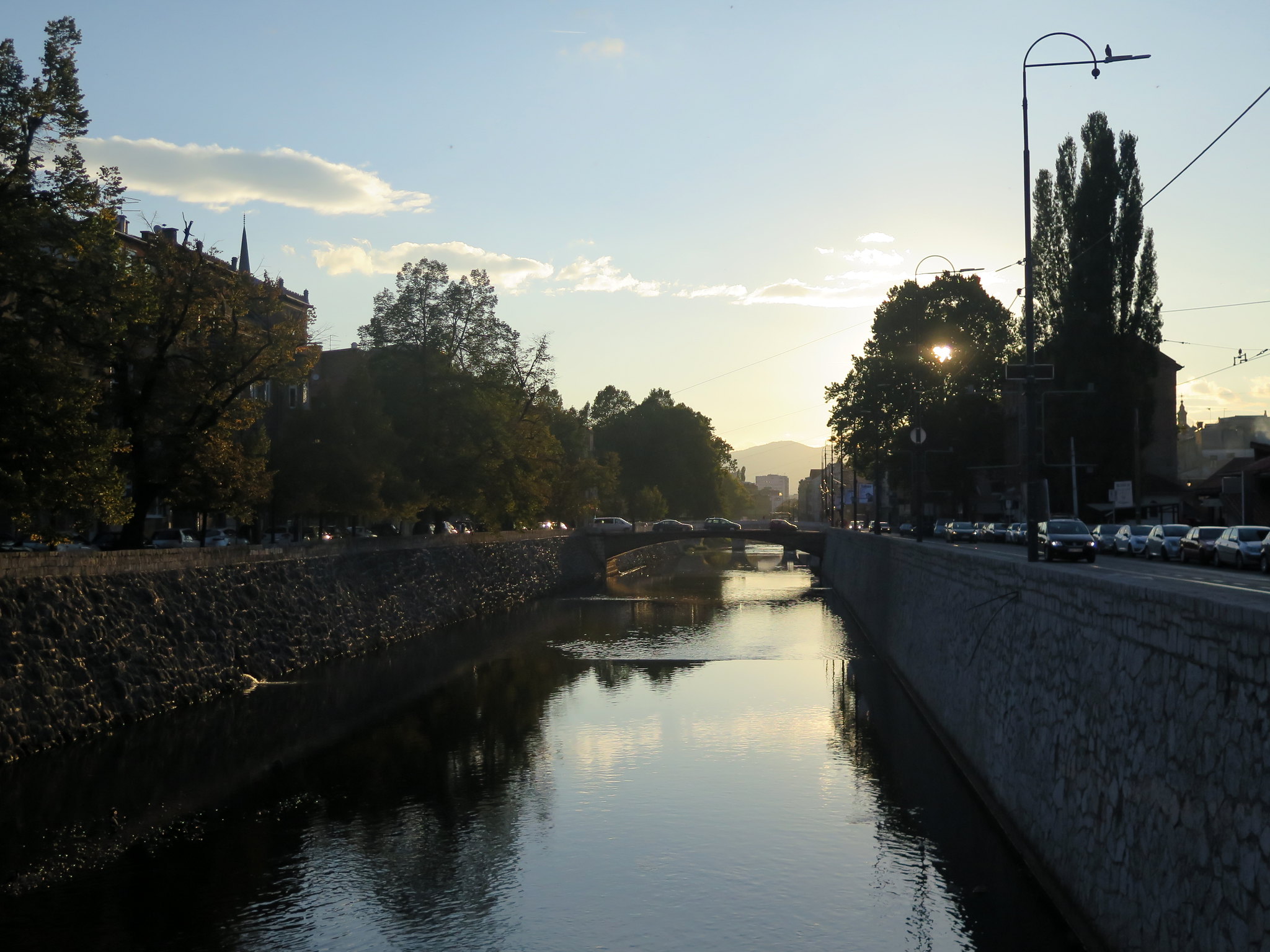 There is of course more modern work as well. 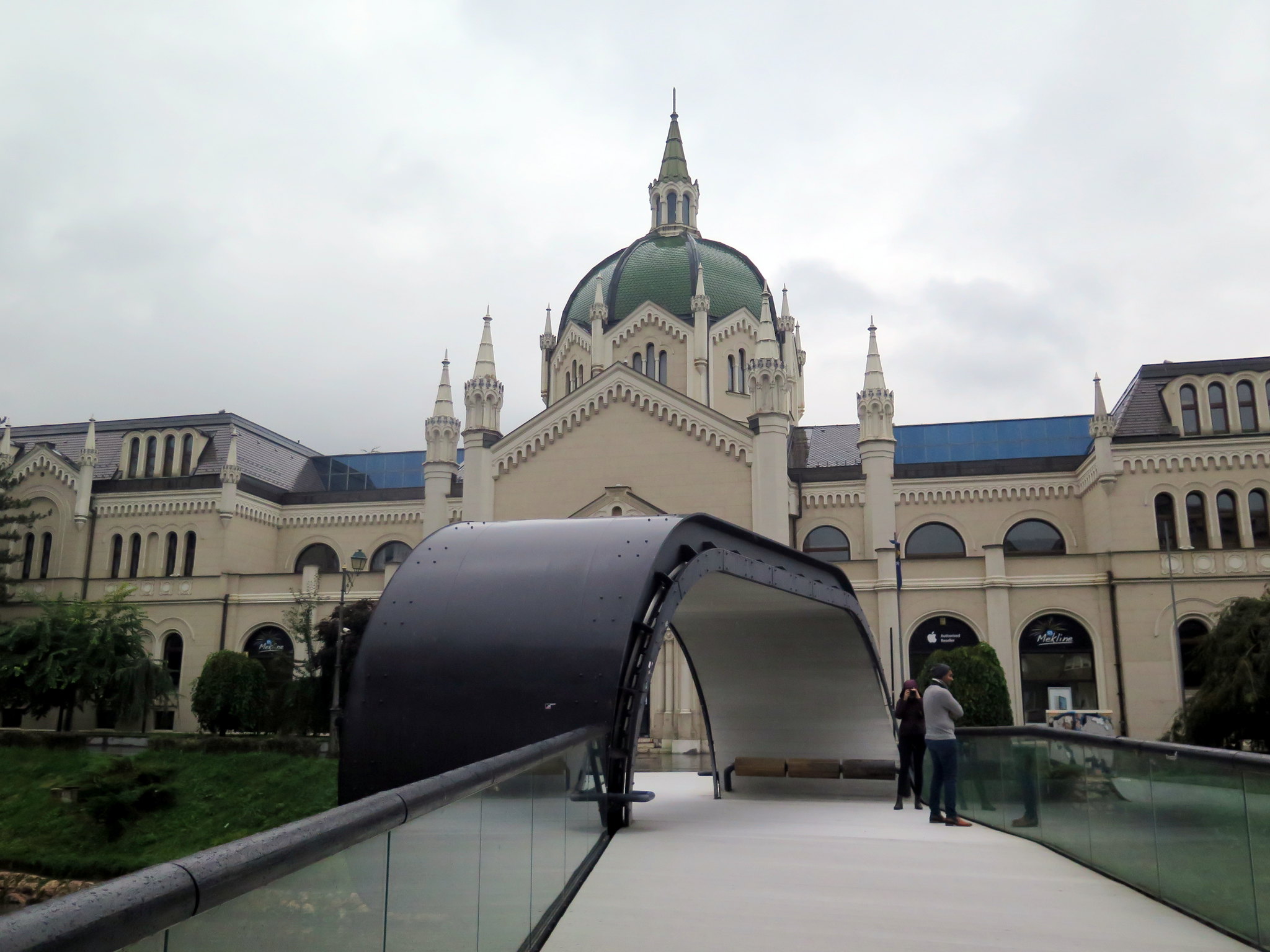 Sarajevo also has a whimsical side. 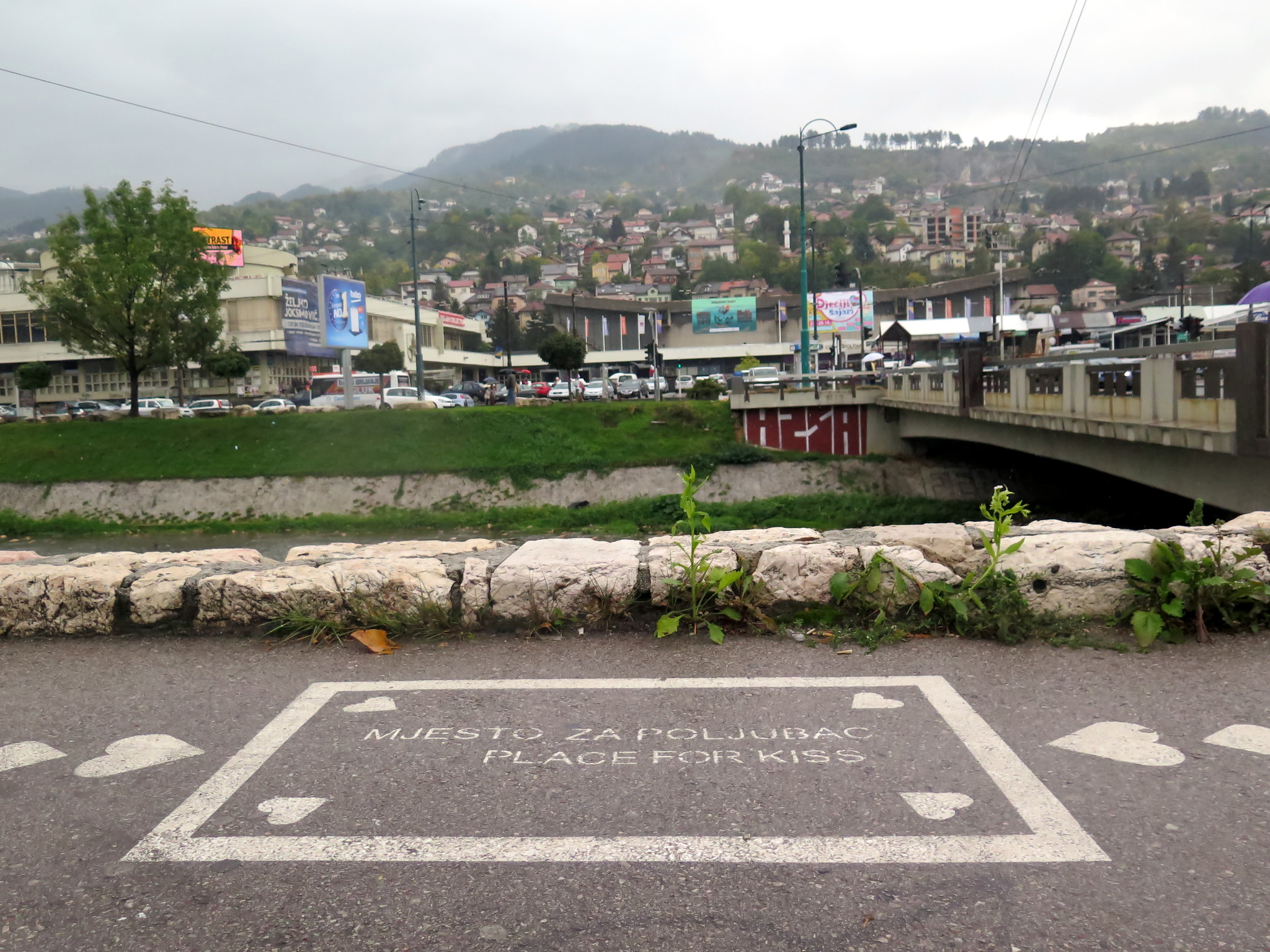 Even away from the river and the old town, the architecture is interesting. 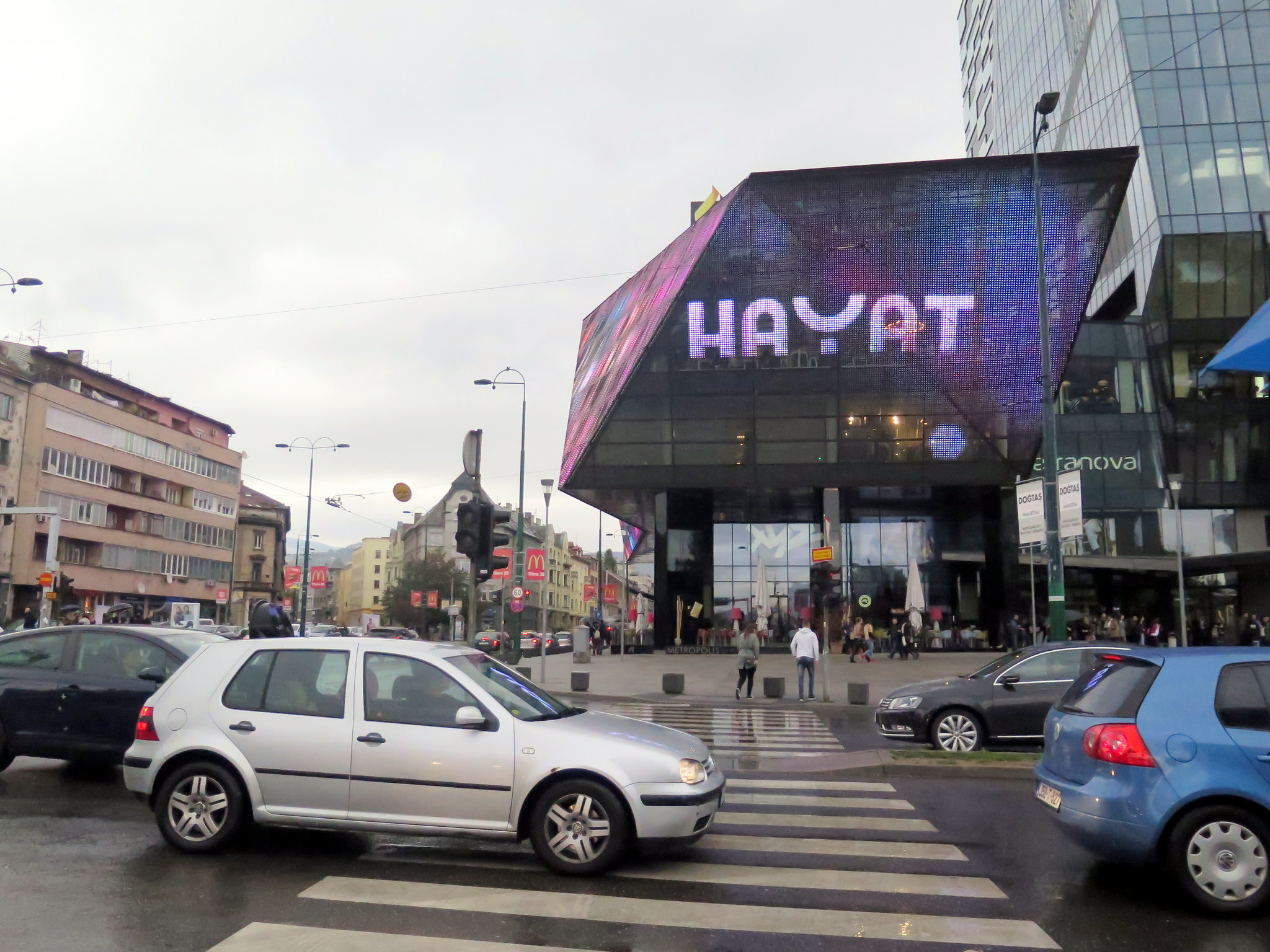 This mall in the downtown gives no sign that it’s anything less than a fully modern shopping experience. 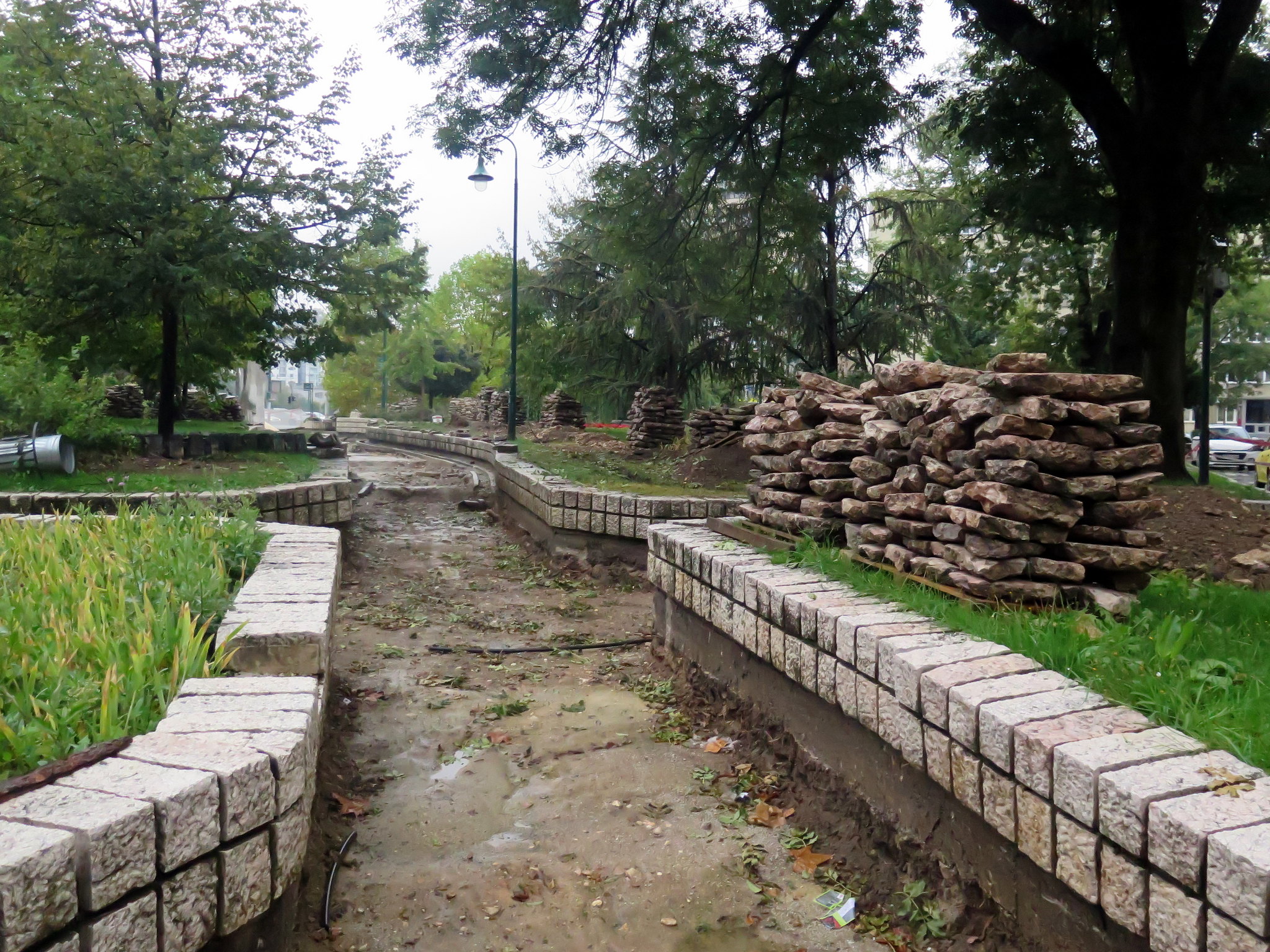 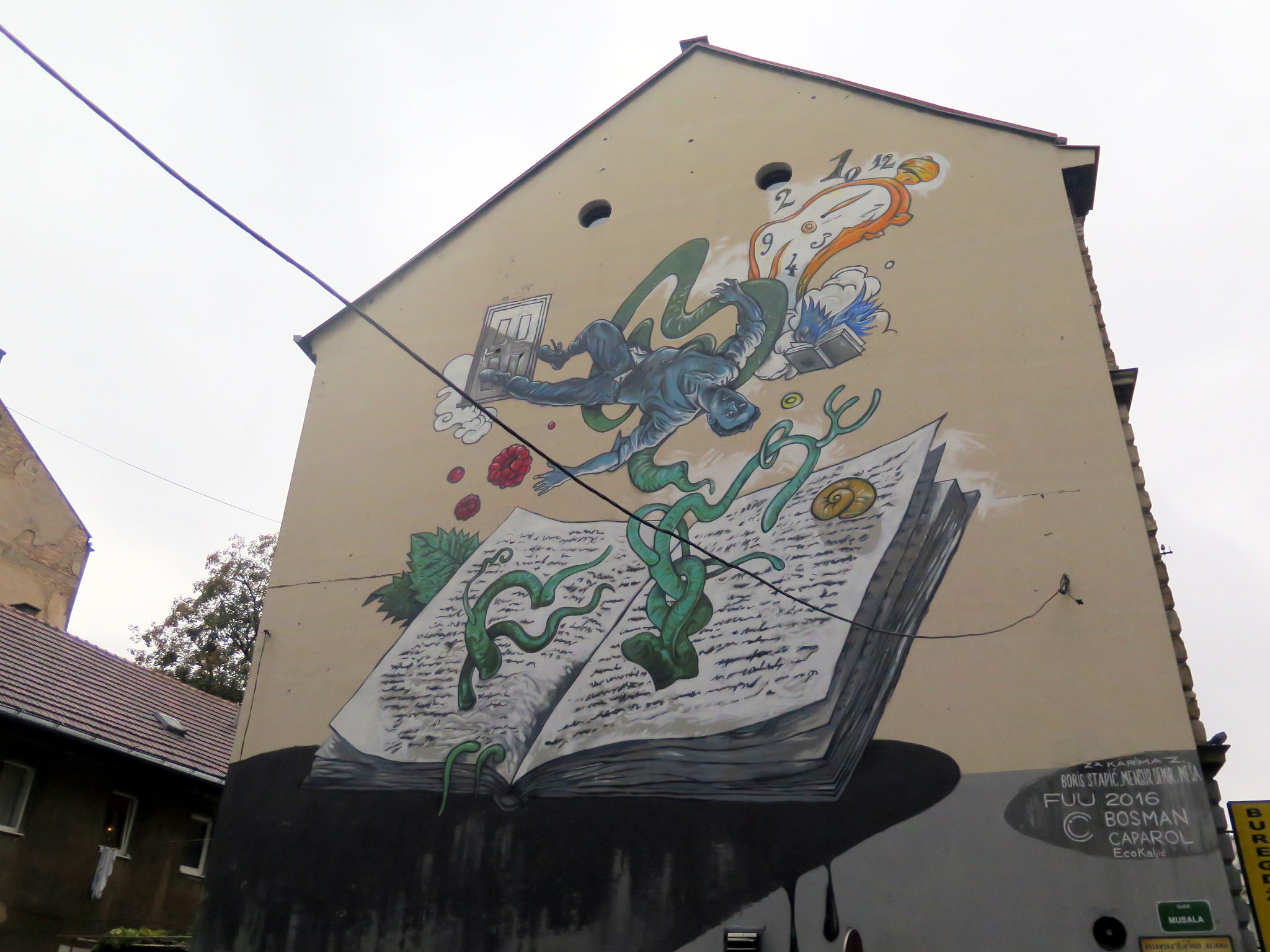 And there were lots of examples of really great murals all around the city. 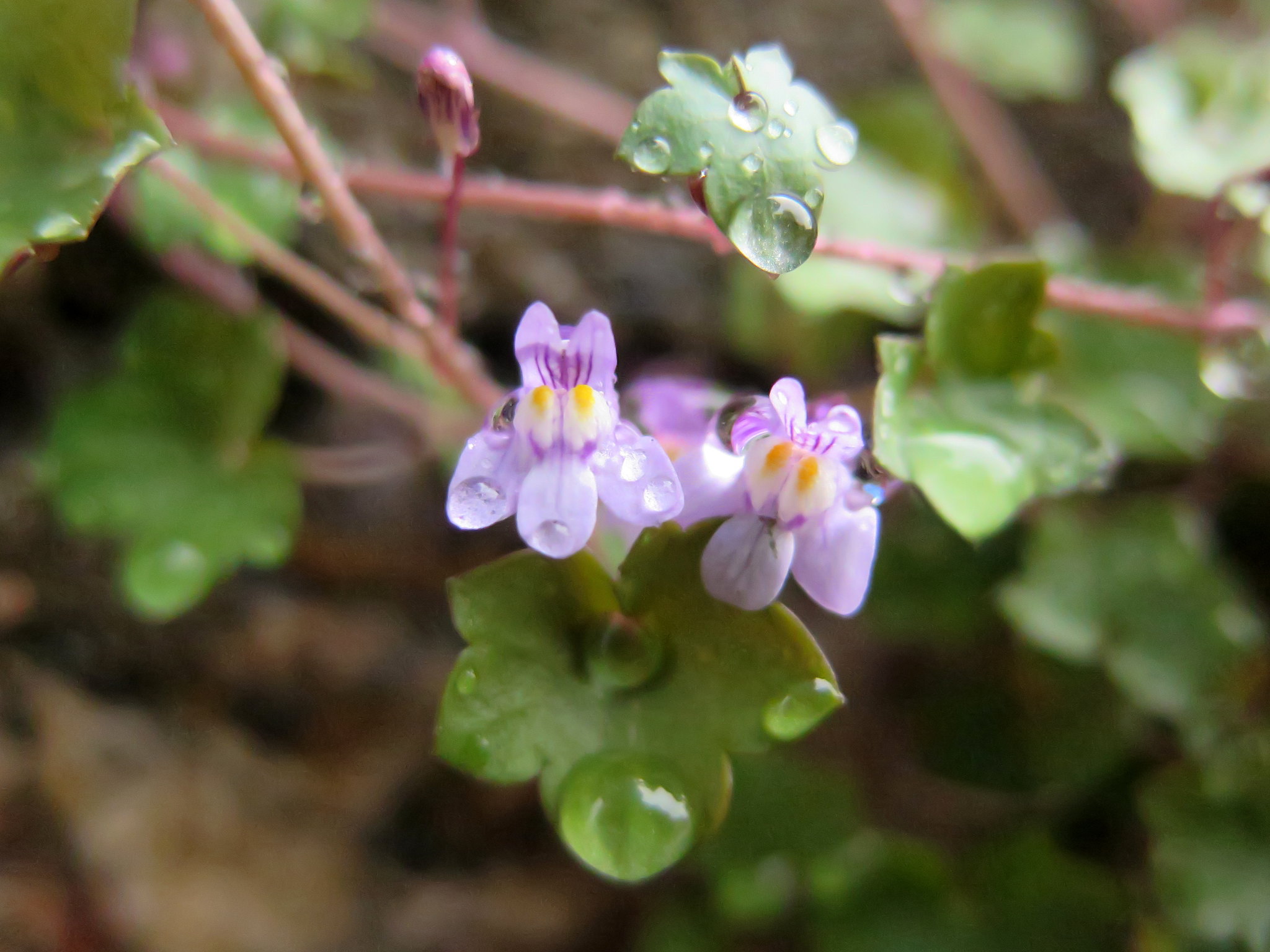 There’s even room for greenery! 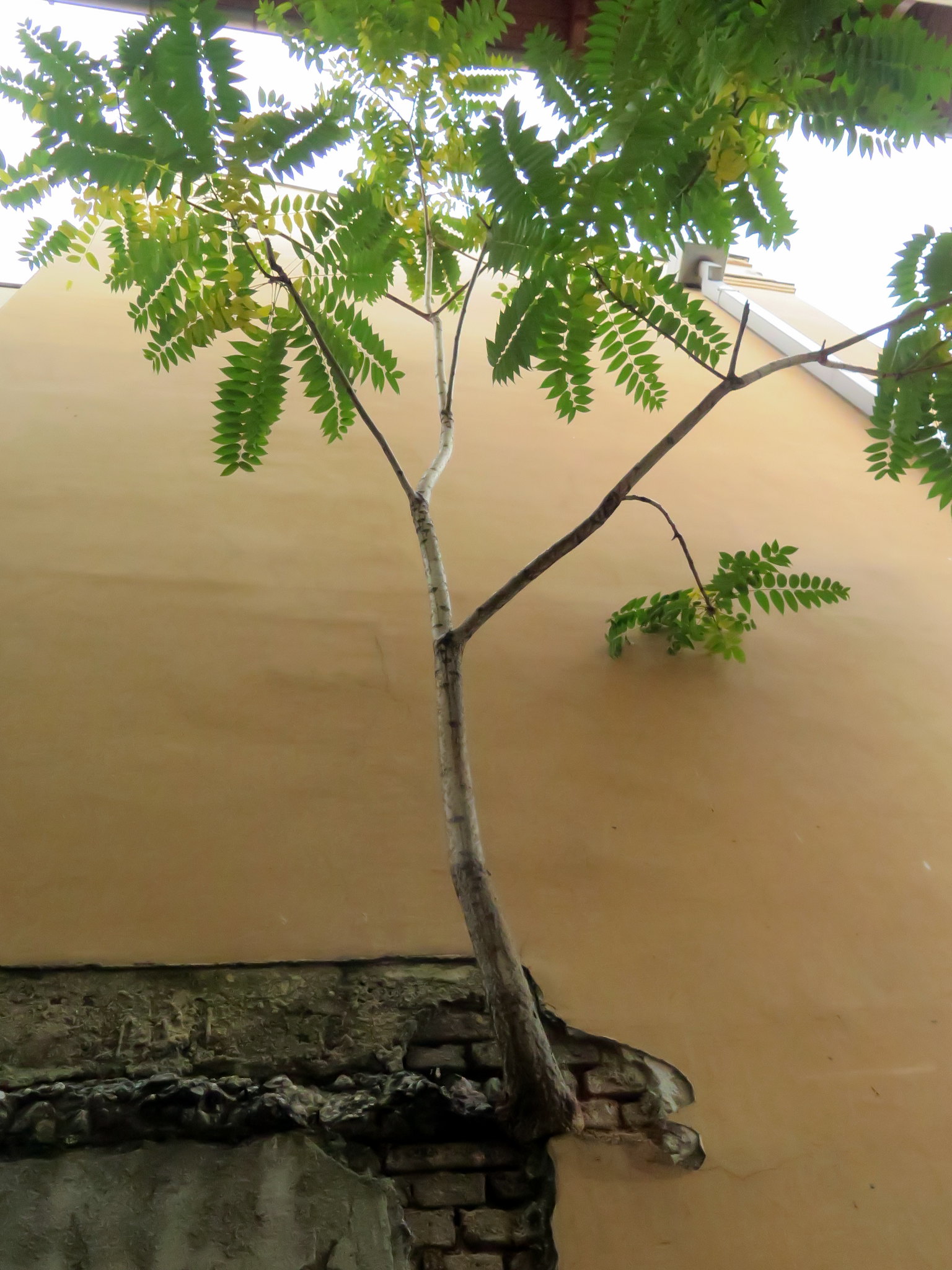 Like this lovely tree growing out of a wall. 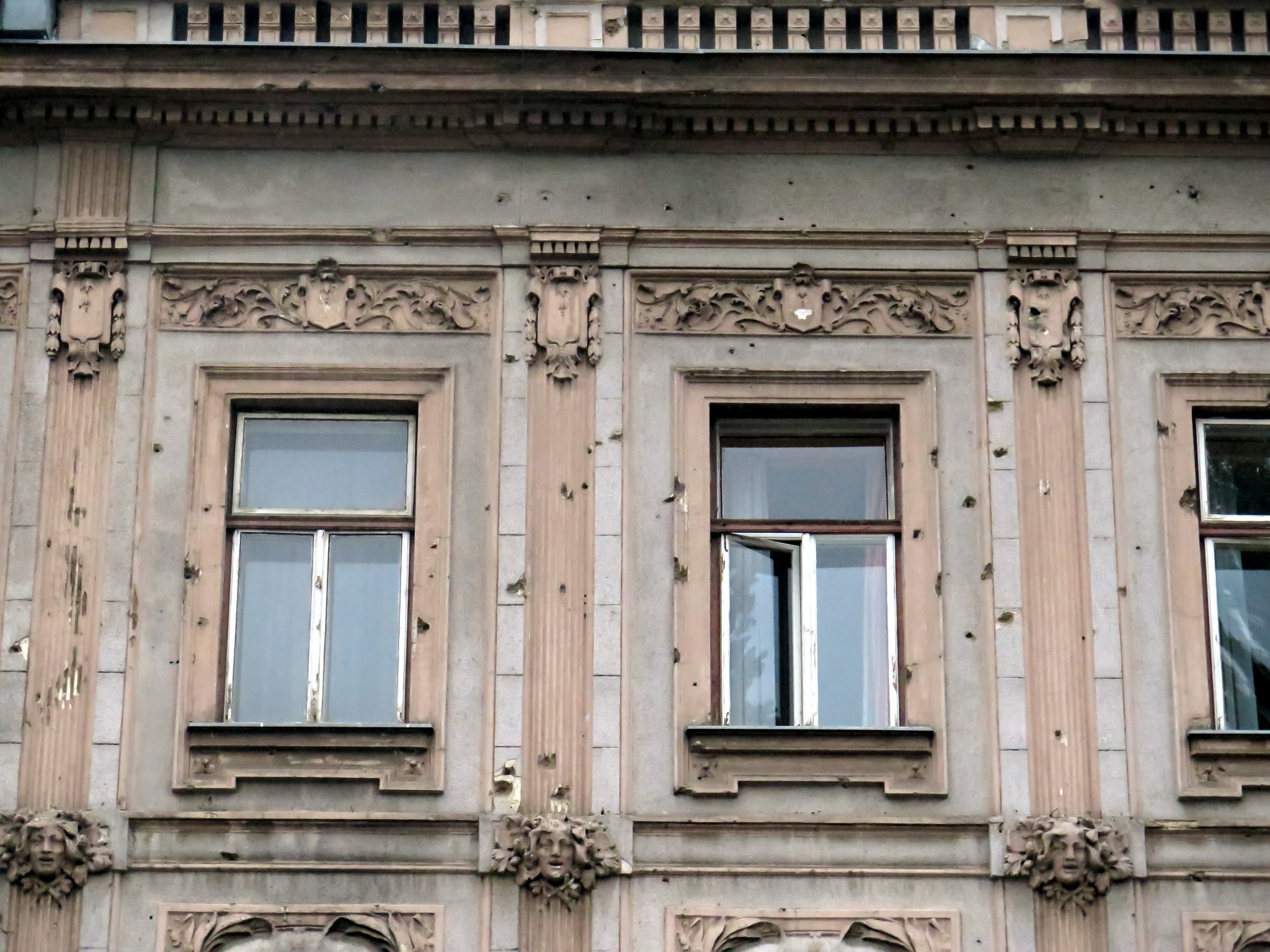 There’s no way to escape the reality that a war took place here, not long ago. Sarajevo was under siege from the hills – bullets riddled the buildings and mortars fired into the heart of the city. It is a difficult emotion to describe – awe, respect, maybe? Like being confronted something extremely distant and surreal made concrete. These scars are signs of what the people here endured.

It is very eery to see those familiar soviet-style blocks with gunshots, instead of poor maintenance, damaging the facade. 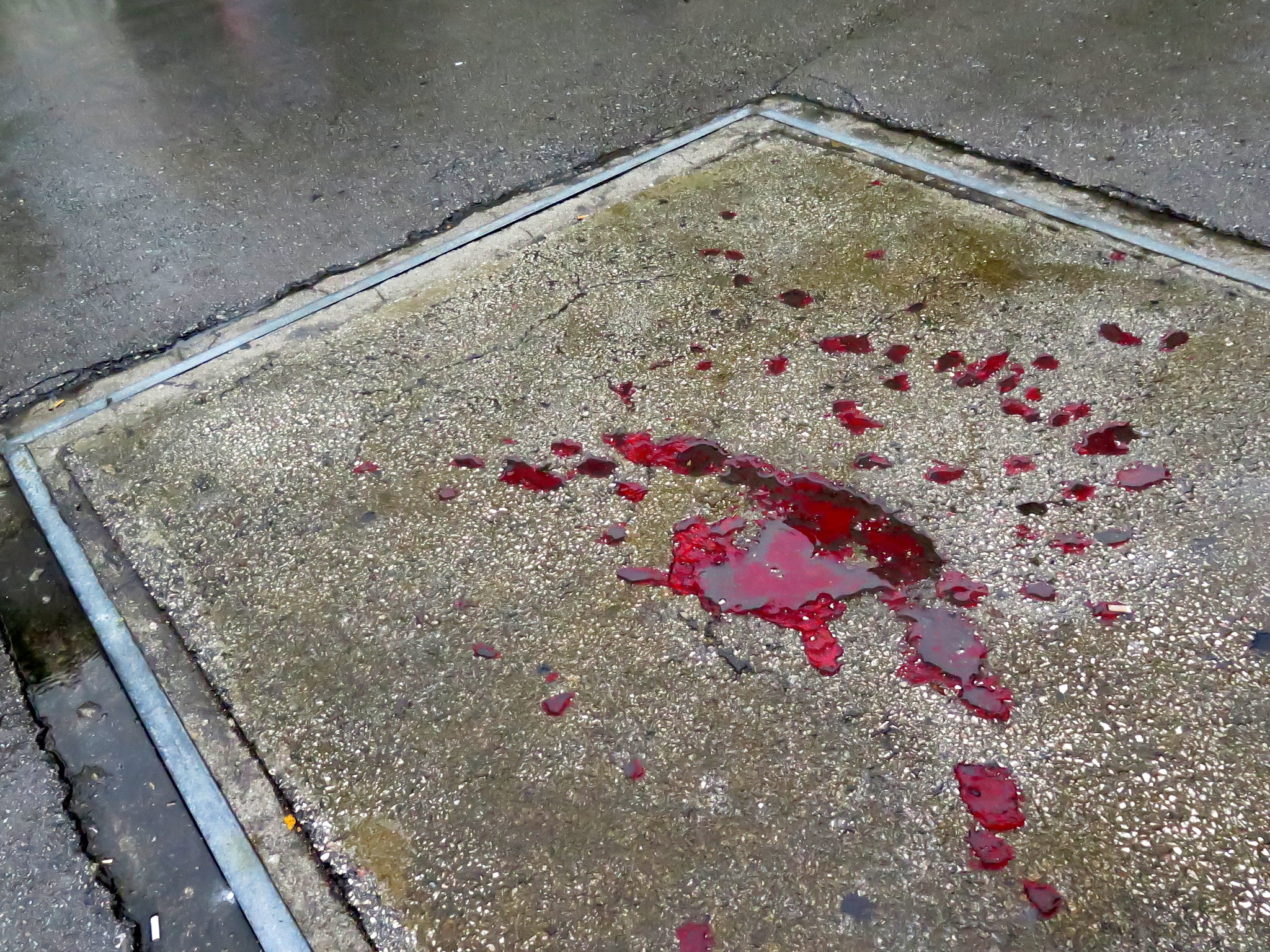 Alongside the bullet specked buildings are the mortar holes. Some time after the war, a citizen artist filled in some of them with red asphalt – these are the roses of Sarajevo. Only scars from mortars that killed one or more people. There are plenty of mortar holes in the city that aren’t filled in as well – after a little while walking around you can sort of tell what’s from a mortar versus what’s from regular disrepair. 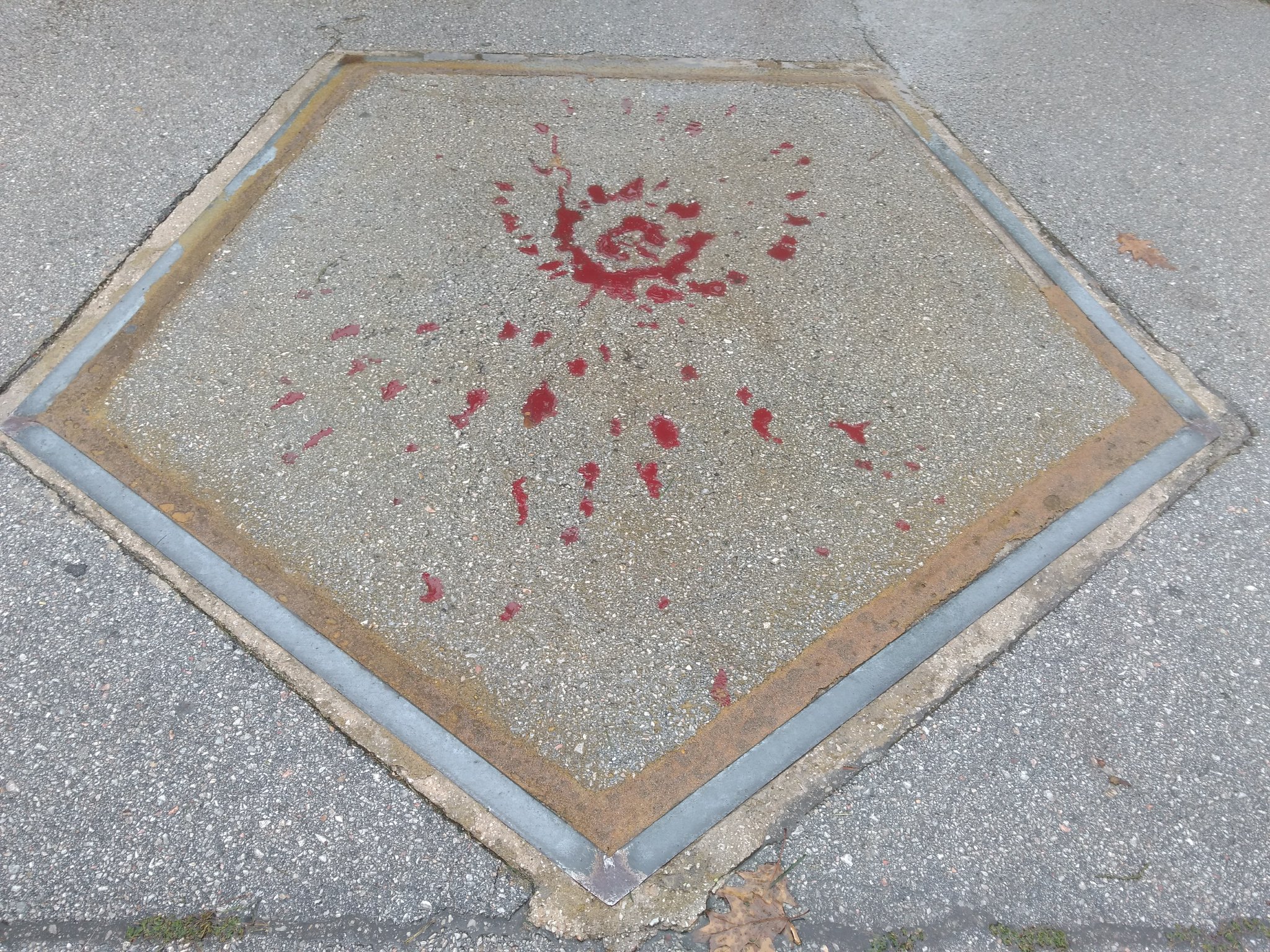 Some of the particularly notable roses, or ones near other famous landmarks, have been roped off to protect them. There were once a great many more around the city, but time and reconstruction has removed all but a few. 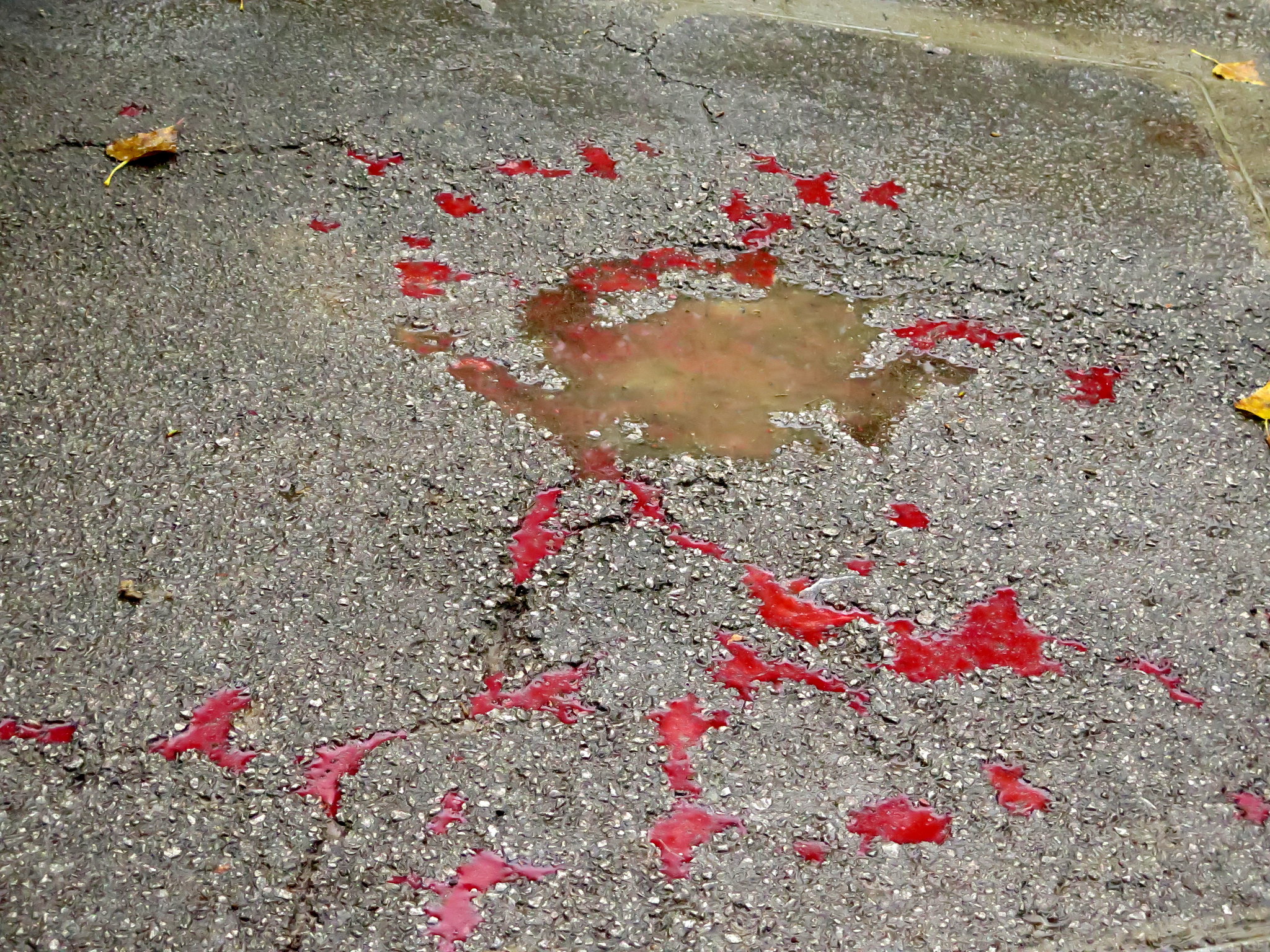 The ones that are not ‘sanctioned’ tend to wear away after a while. 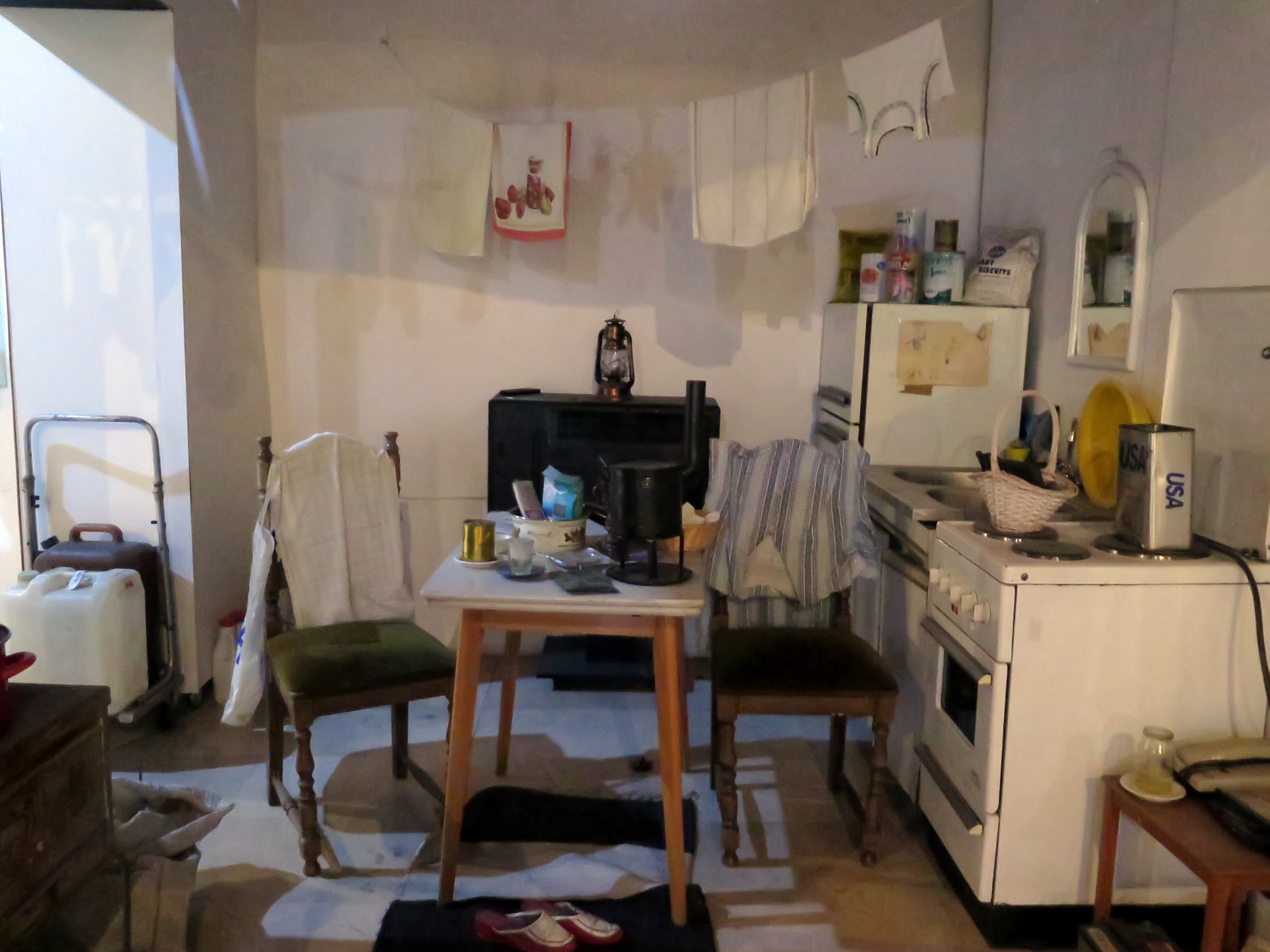 To get a better understanding of what life was like during the war, there is a museum in the city with an entire room dedicated to preserving and showing artifacts, posters, and in this case, an entire apartment. It’s a sad and sobering place to visit – I highly recommend it, but maybe have a less heavy activity planned for the rest of the day. 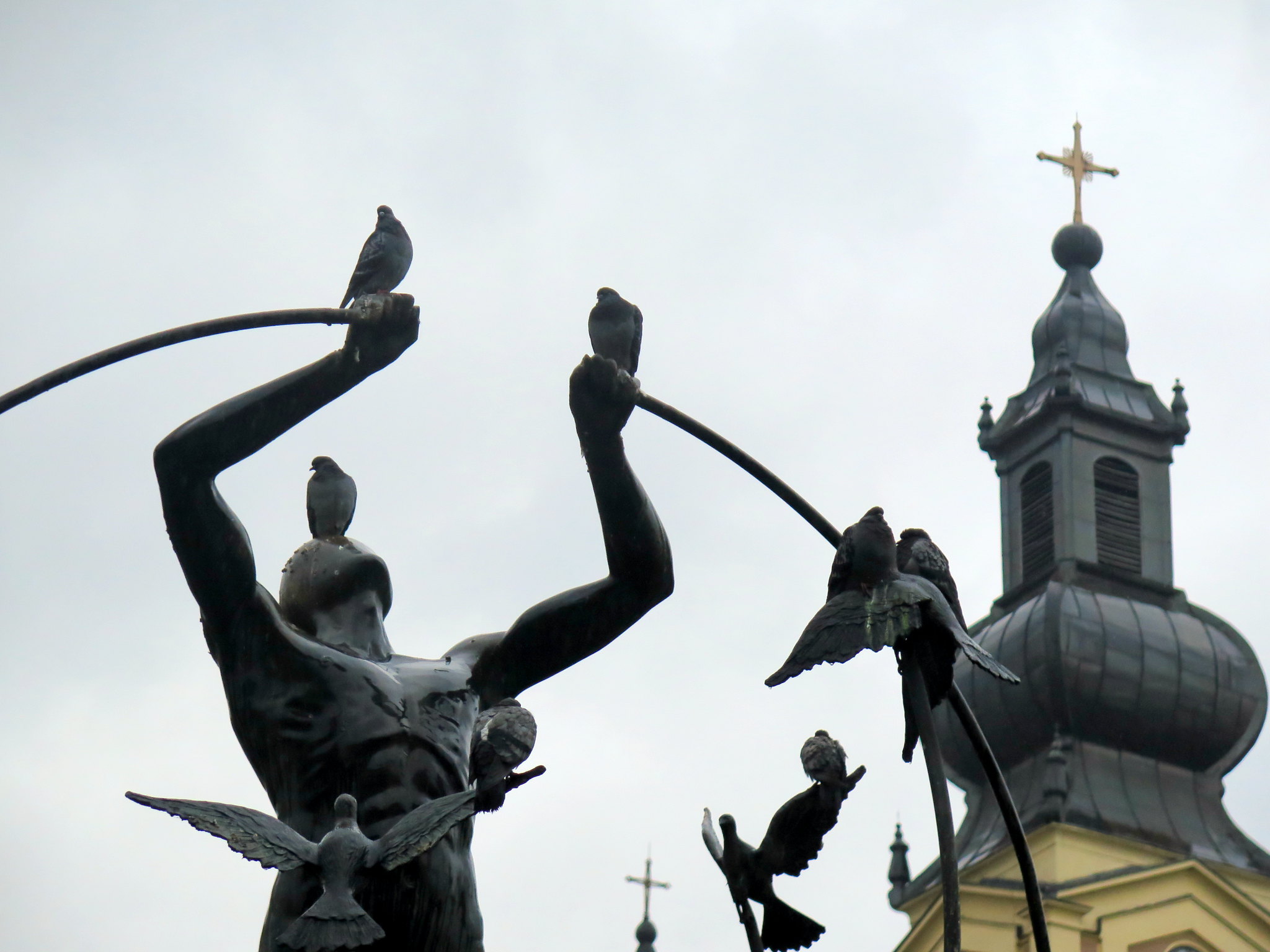 The city and its people seem to be moving on. The war is clearly not forgotten, but it is also not holding anyone back from creating a new life and bringing Sarajevo into modernity and prosperity. 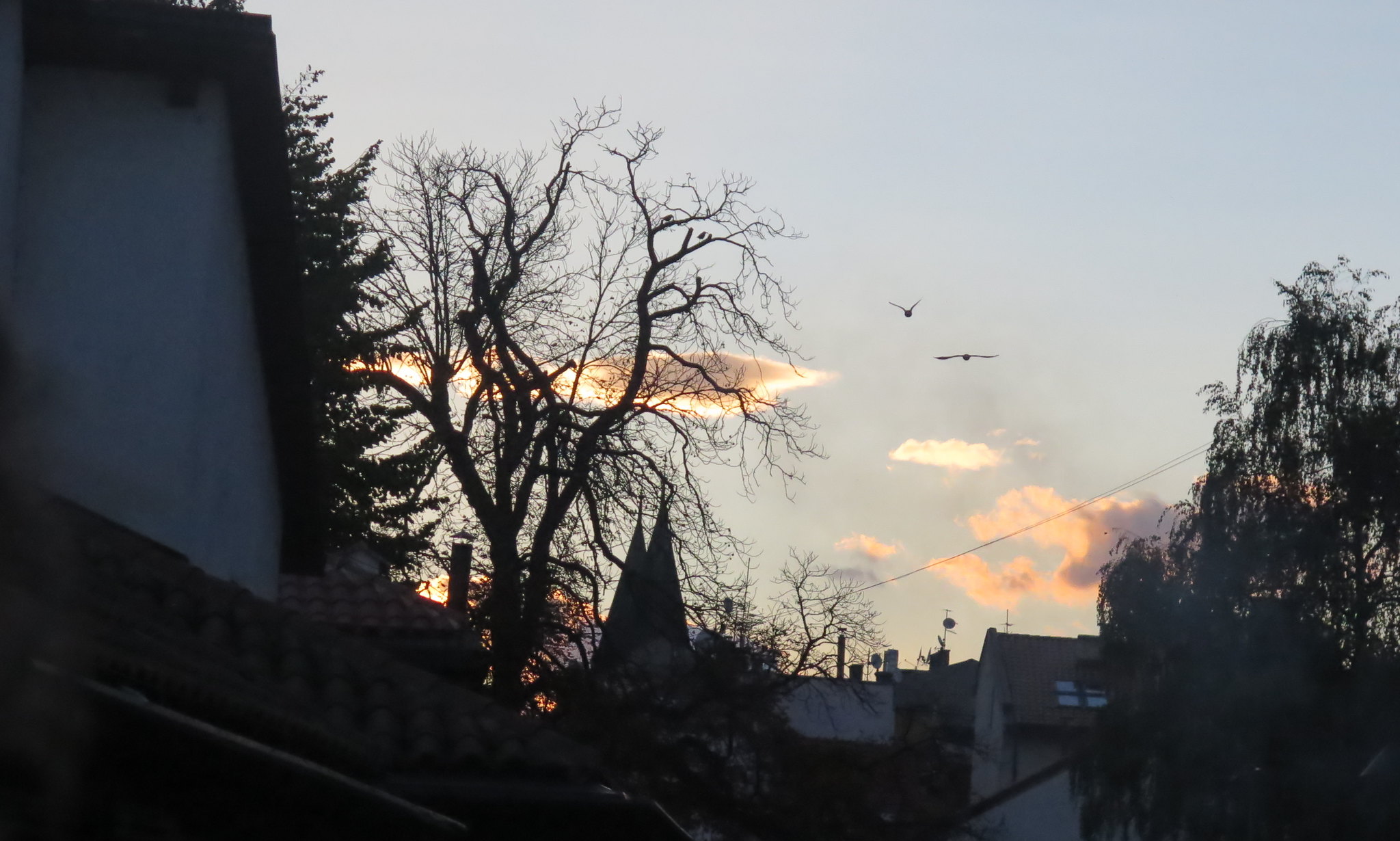