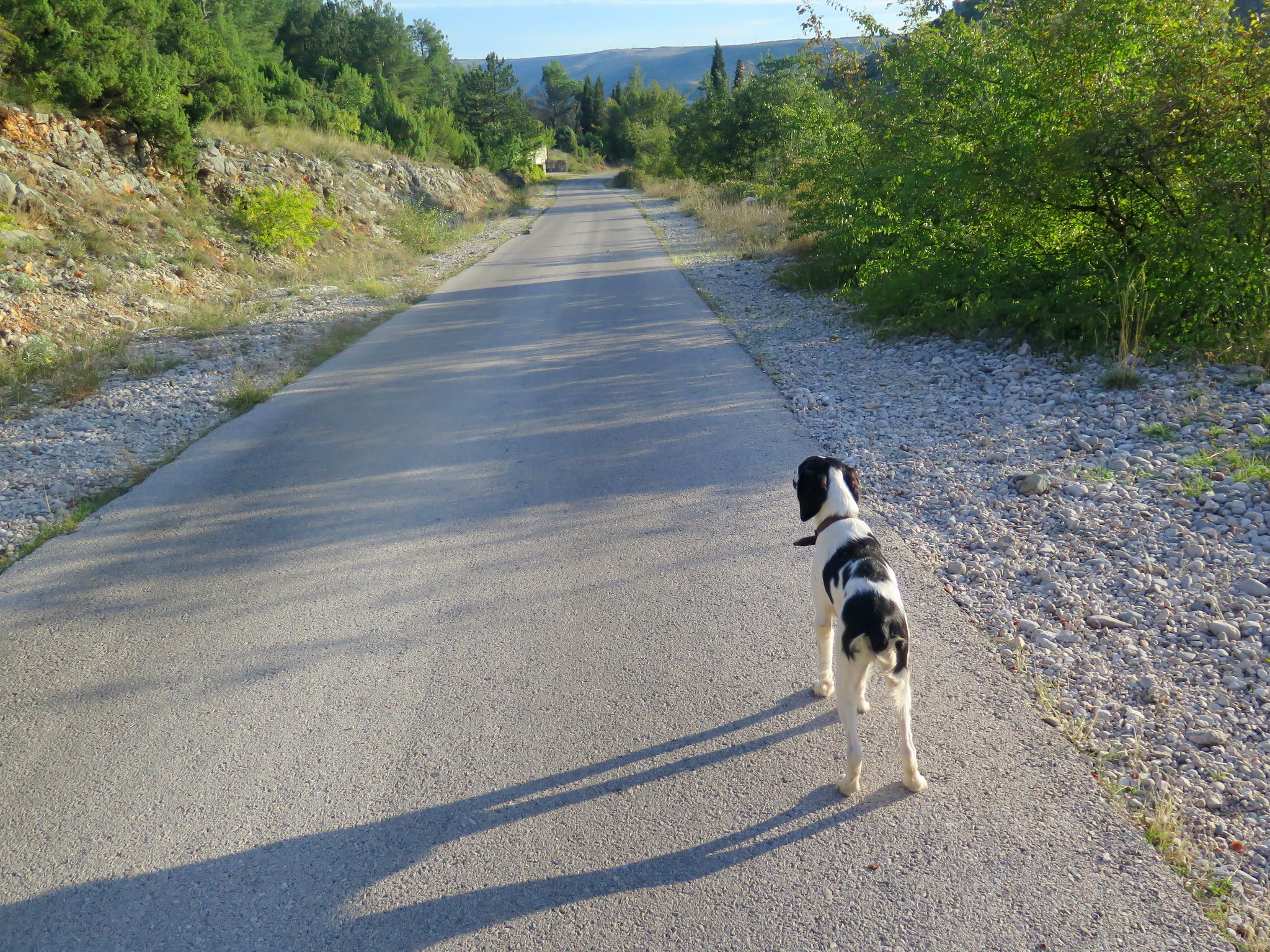 On our way down Hum Hill, we ran into a dog! He was super cute and very friendly. I pet him, of course. 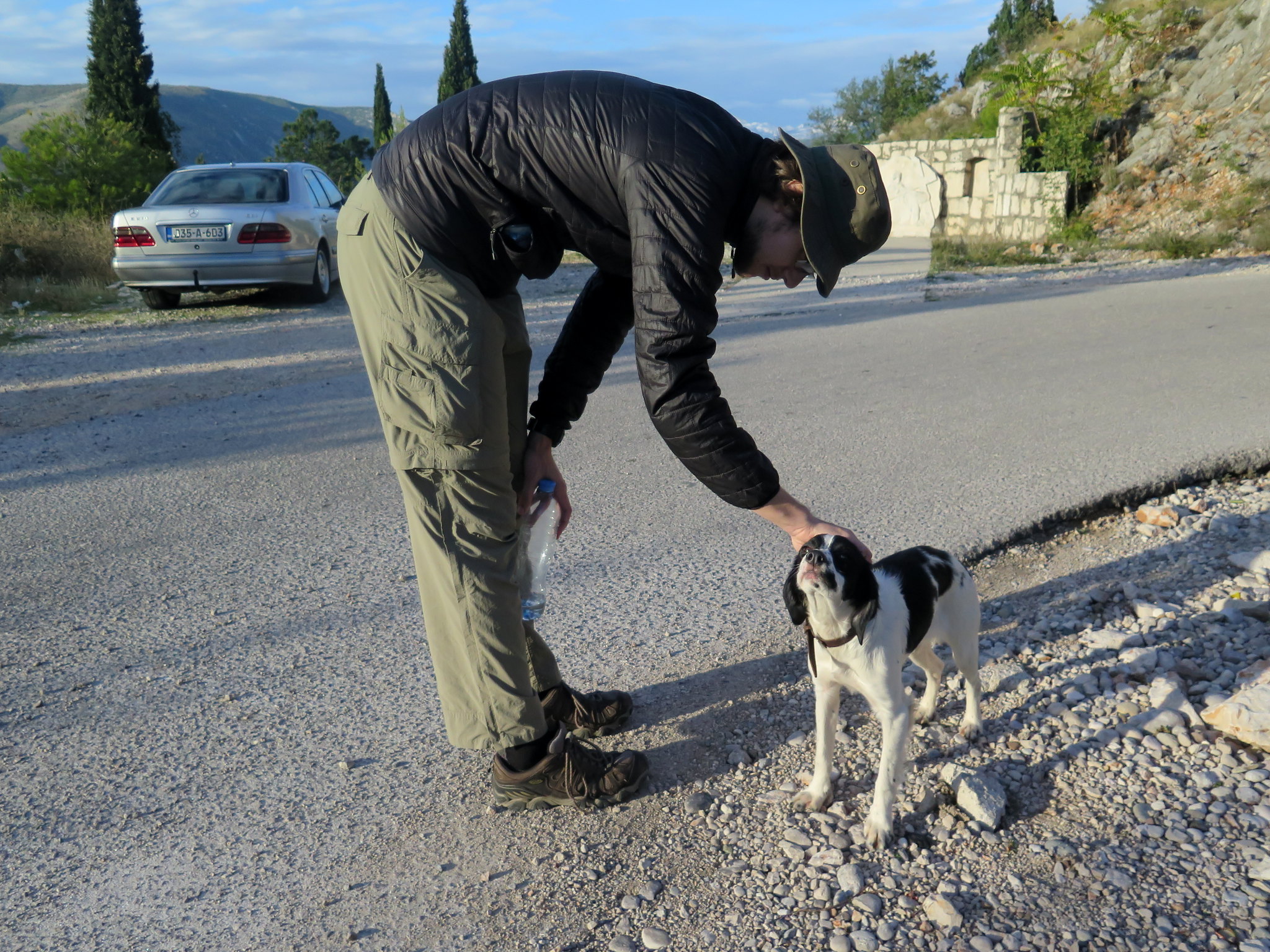 As we walked down, the dog came with us. Uh oh. At one point I walked him all the way back up to where we thought his car and owner would be, but no such luck. Doggo walked right back down with us. 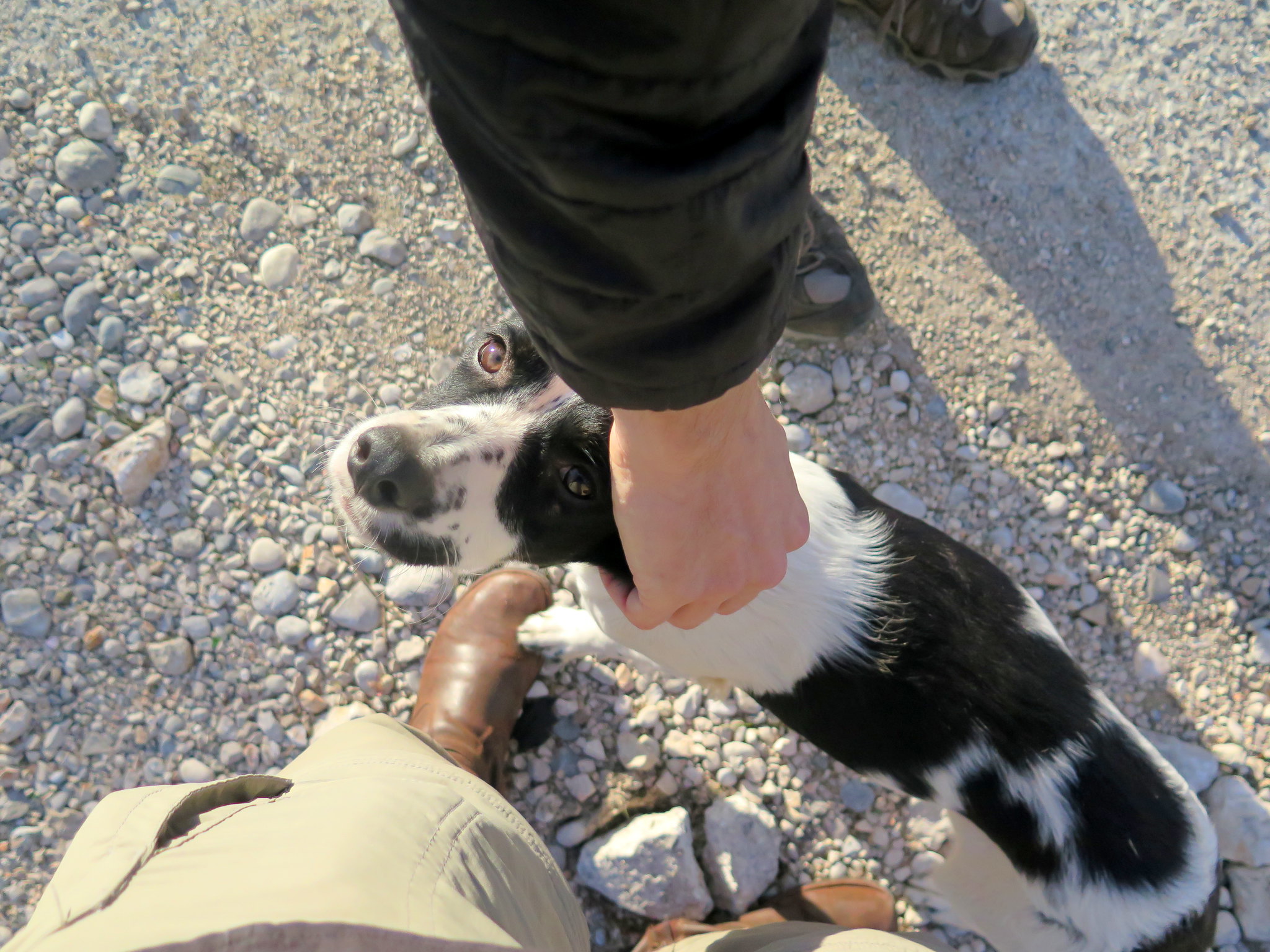 Now we were in a bit of a quandary. Doggo had clearly decided he would be following us, but he also clearly had a collar. We didn’t want to accidentally lead someone’s dog down the hill. It was getting cold so Natalie wrapped him in her jacket while we decided what to do. We checked for a dog rescue in Mostar – there was one! But we had no real way to contact them. We settled on the next best thing – flagging down cars to ask a local for help. Most passed right by us, but a few stopped. 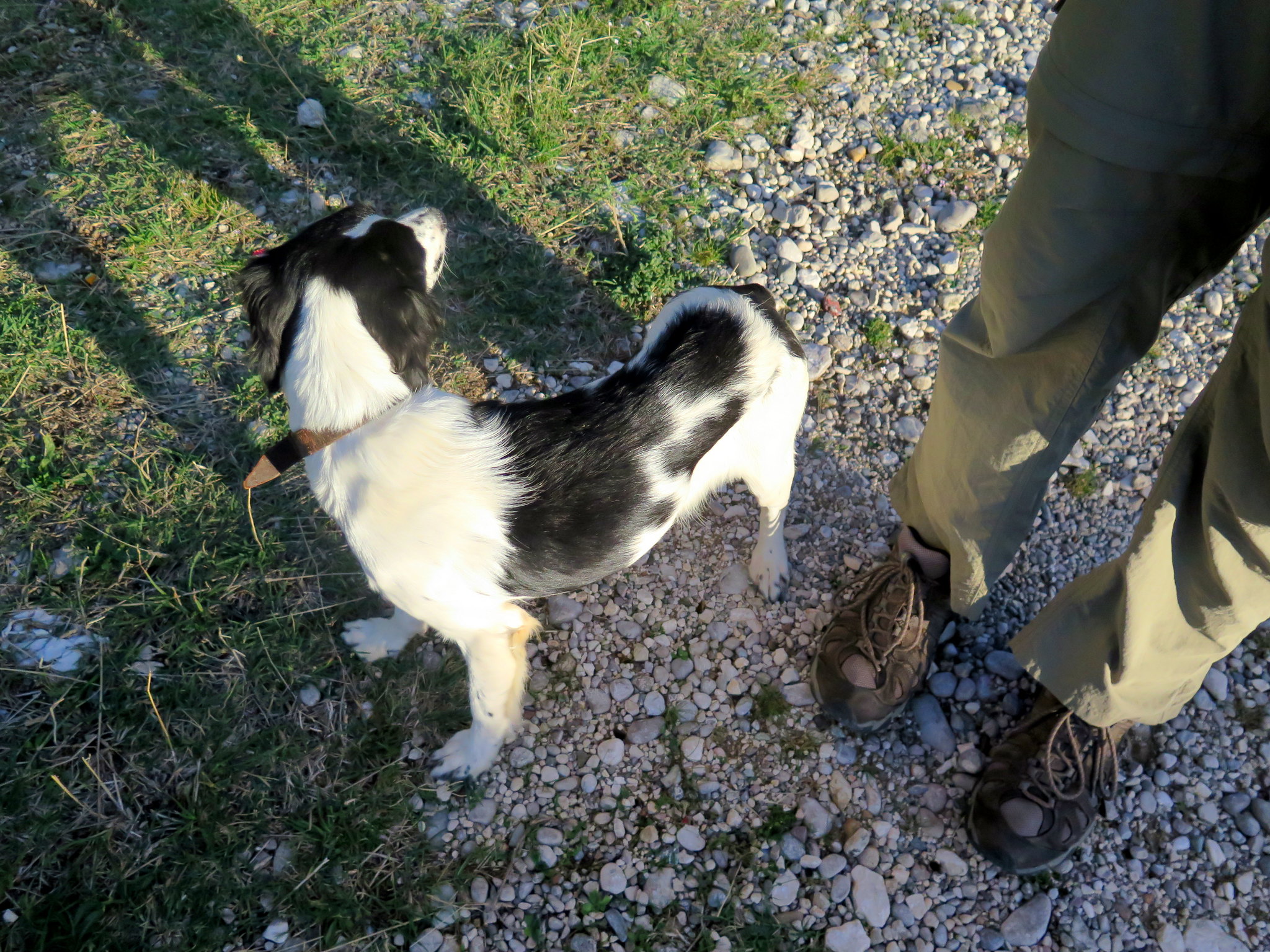 The general consensus seemed to be that sometimes – fairly often – people will leave their dog up on the hill when they don’t want it anymore. This seemed unbelievably cruel, so we asked about a shelter. This was admittedly naive but hey, the dog was quiet, apparently well behaved, and adorable. As we expected though, Bosnia is not at the stage of having animal shelters, and one of the people who helpfully stopped told us he calls the rescue people once in a while but they never seem to come. The thought on whether to bring him down into the city with us, or leave him on the mountain, was that in the city, he’d be competing with some very rough street dogs. Up here at least, even though it was cold, there would be less violence. Neither option seemed great to us, and it was pretty clear doggo would follow us right down the car-laden road. 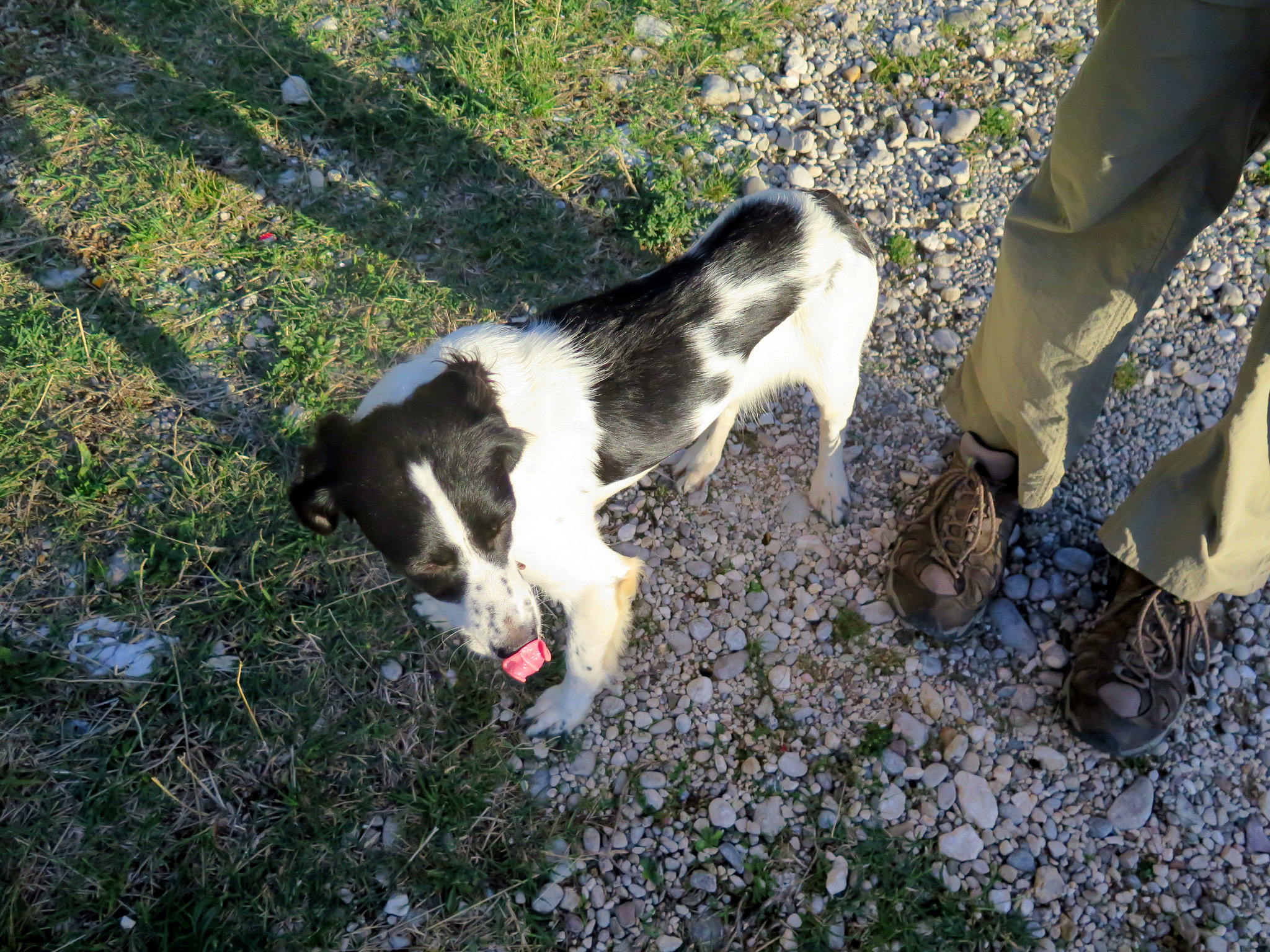 We finally met someone coming down who was taking pictures with a drone and seemed fairly well off. We chatted for a bit – a surprising number of people spoke great English. He promised he would at least stop the dog from following us into the road, and also ask anyone else he saw if they knew the owner. We left with a heavy heart. With any luck someone took pity and took doggo in – our only solace is that the guy we left him with seemed like a good person and maybe in need of a pet? Despite what we’re used to in first world countries – that shelters aren’t great and adoption is hit and miss – there are at least mechanisms in place to prevent total abandonment. In many countries around the world, there isn’t even that. We want to believe everything turned out ok for doggo as we made our way down into the city. 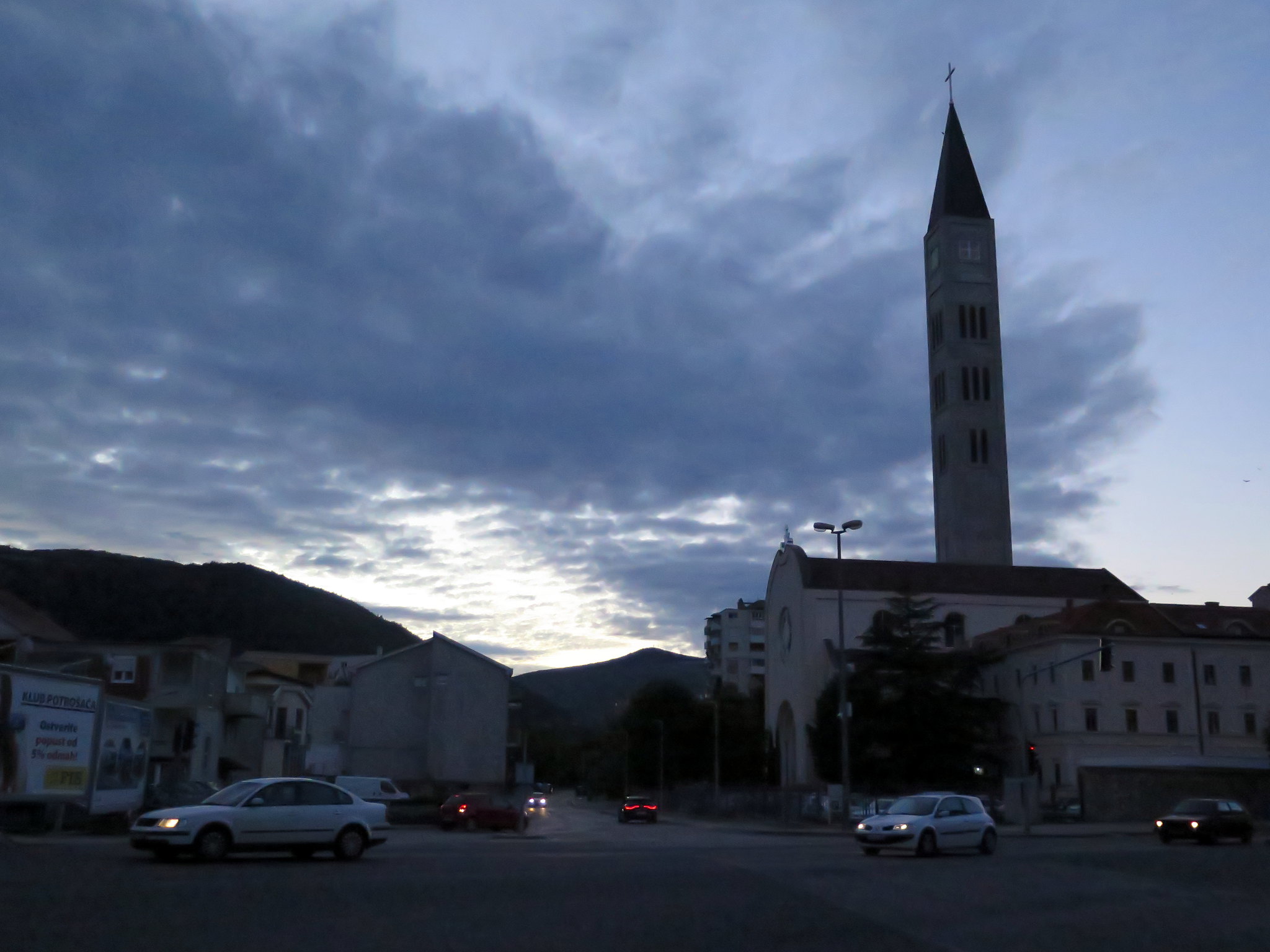