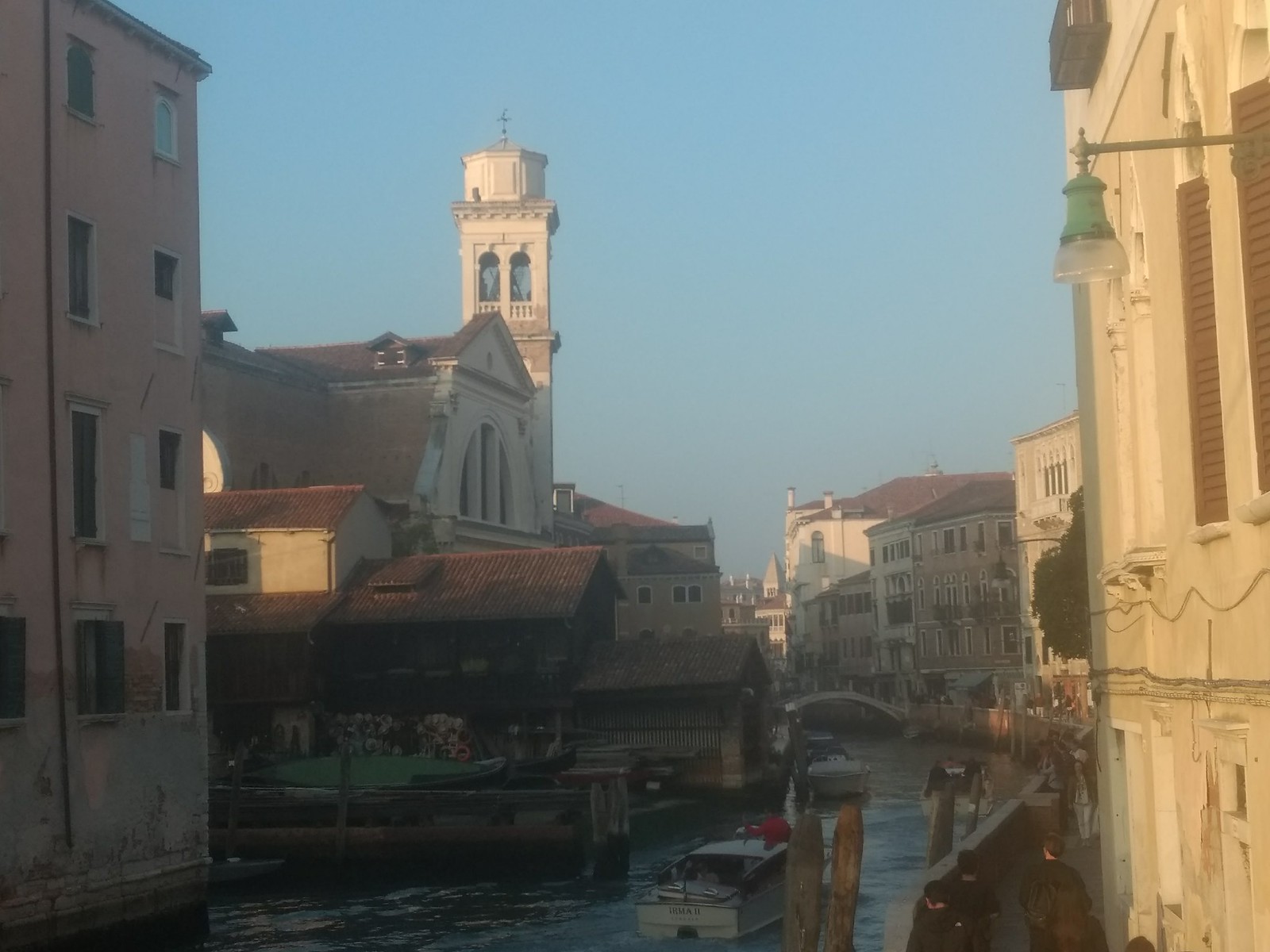 Venice is a beautiful and fascinating place. I’ve always wanted to visit, Natalie not so much. It turns out that it’s got a little bit of everything, good and bad. Its beautiful, winding alleys interspersed with canals and bridges and spires are inspiring. The measures taken to keep buildings from falling and the island from sinking are a testament to human ingenuity and stubbornness. Its attitude towards tourists and the costs (and sometimes smells) of living on the island are saddening. In my view visiting Venice is worth it for two things – the history and architecture, and the marvel of engineering that keeps the city alive. Most of the tourist traps should be rightfully avoided, and it’s best to stay away from popular areas at peak hours. 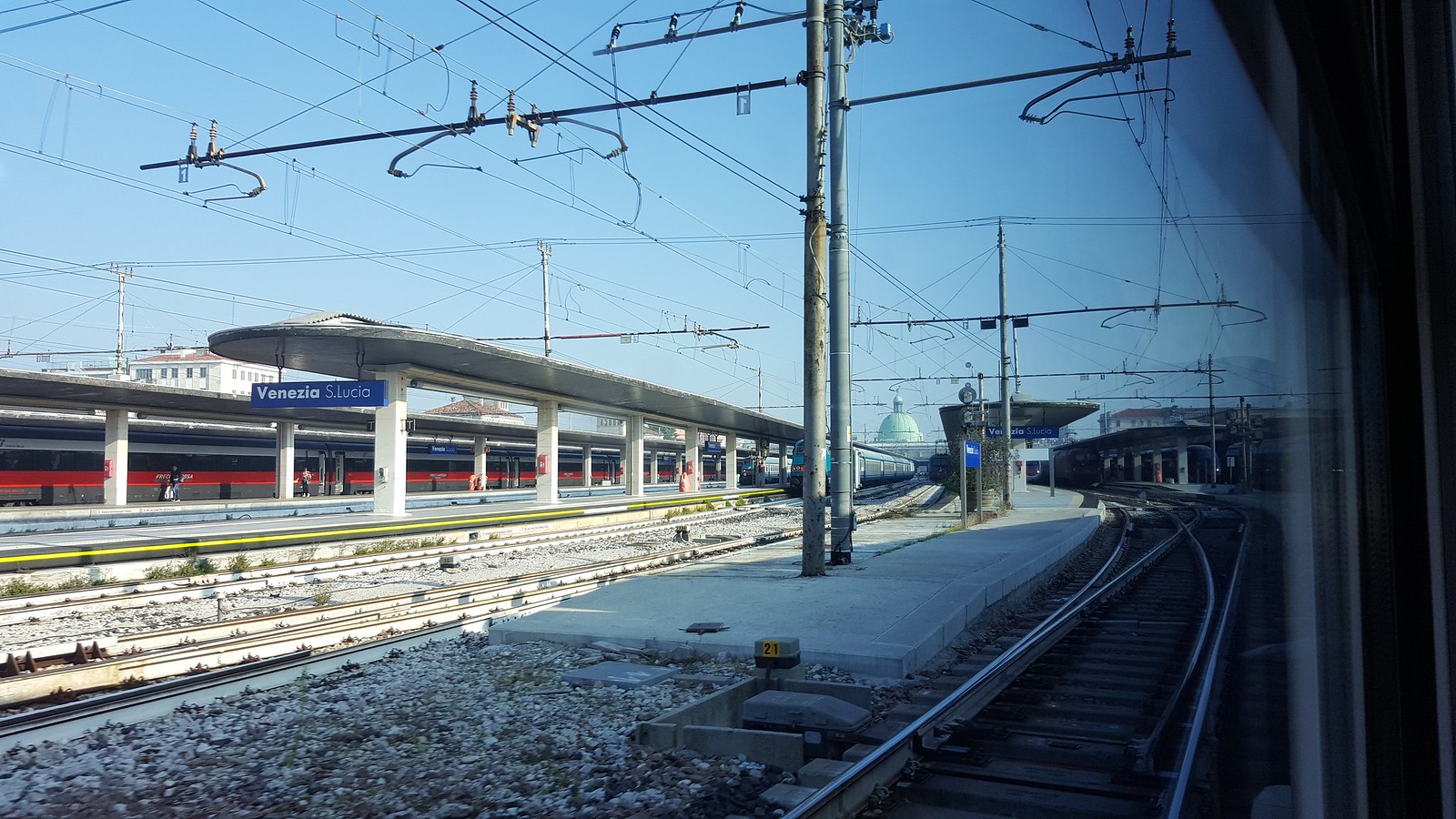 There are basically two ways to see Venice. The cheaper and arguably more lively route is to stay on the mainland at one of several campsites or large hostel-like buildings, and bus in in the morning. The other way, significantly more expensive, but better for seeing Venice the way we wanted to, is to stay on the island itself. It’s not cheap, but for a very short stay, the value of waking up before dawn and walking the empty streets is worth the extra fee. 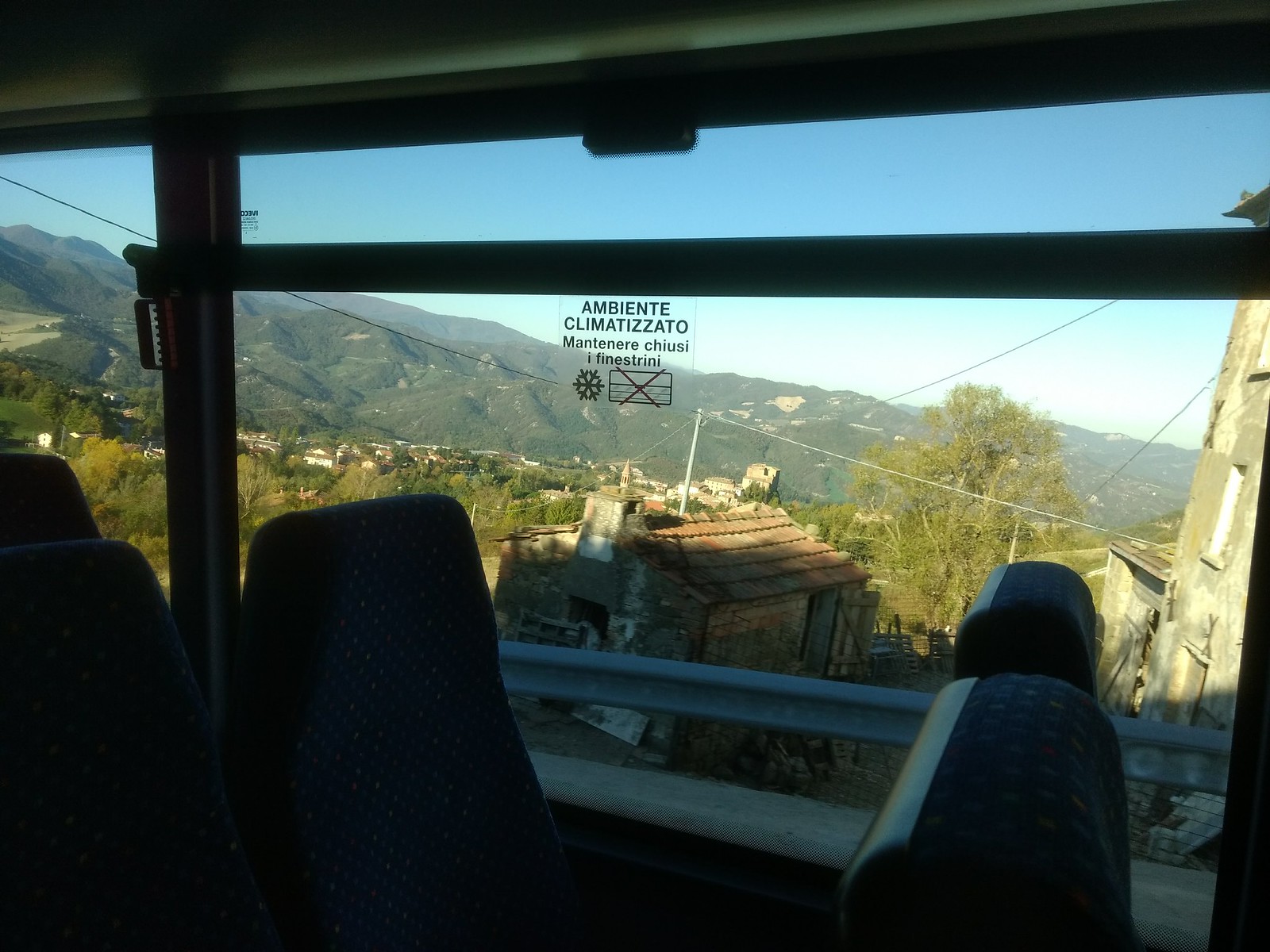 We took the bus out of Sant’Agata, then on to the next bus to Rimini, and finally on to the train north to Venice. Midway through the trip our train stopped and a bunch of announcements came on in Italian. We did not understand them. The train stayed in the station and eventually people started shuffling off. A conductor came by and told us, in slightly broken English, that the train would not be moving again soon, and we should go on to a different track to catch the replacement. We’ve been through worse transportation adventures, but the feeling of an impromptu change of plans in a language we don’t understand is always exciting. 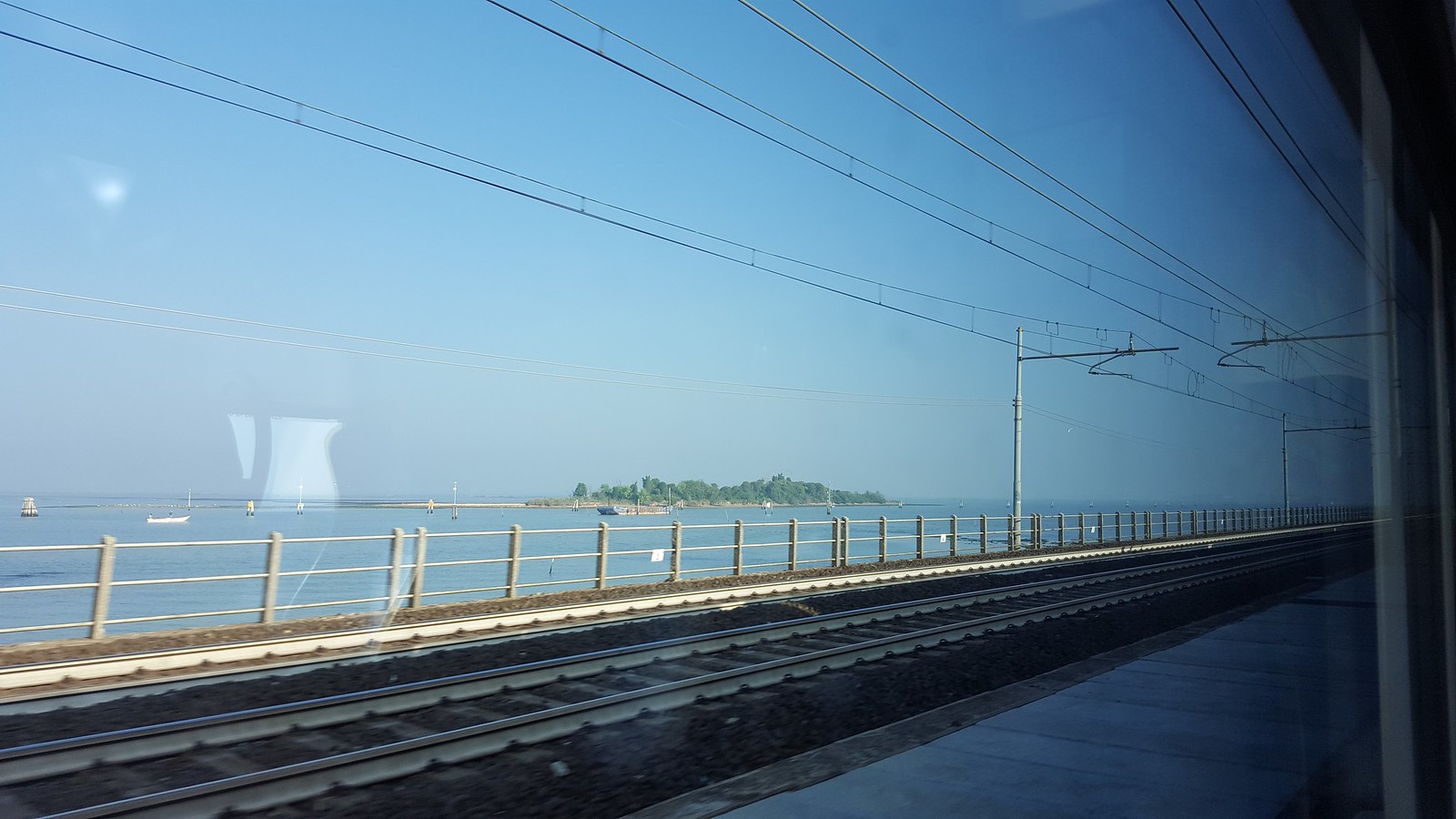 There is the last station on the mainland, and then the open water. The train tracks cross over a narrow bridge, on either side the Venetian Lagoon. Technically, the mainland just before the crossing is also part of the district of Venice, but what everyone thinks of when they hear the name is found across this bridge. 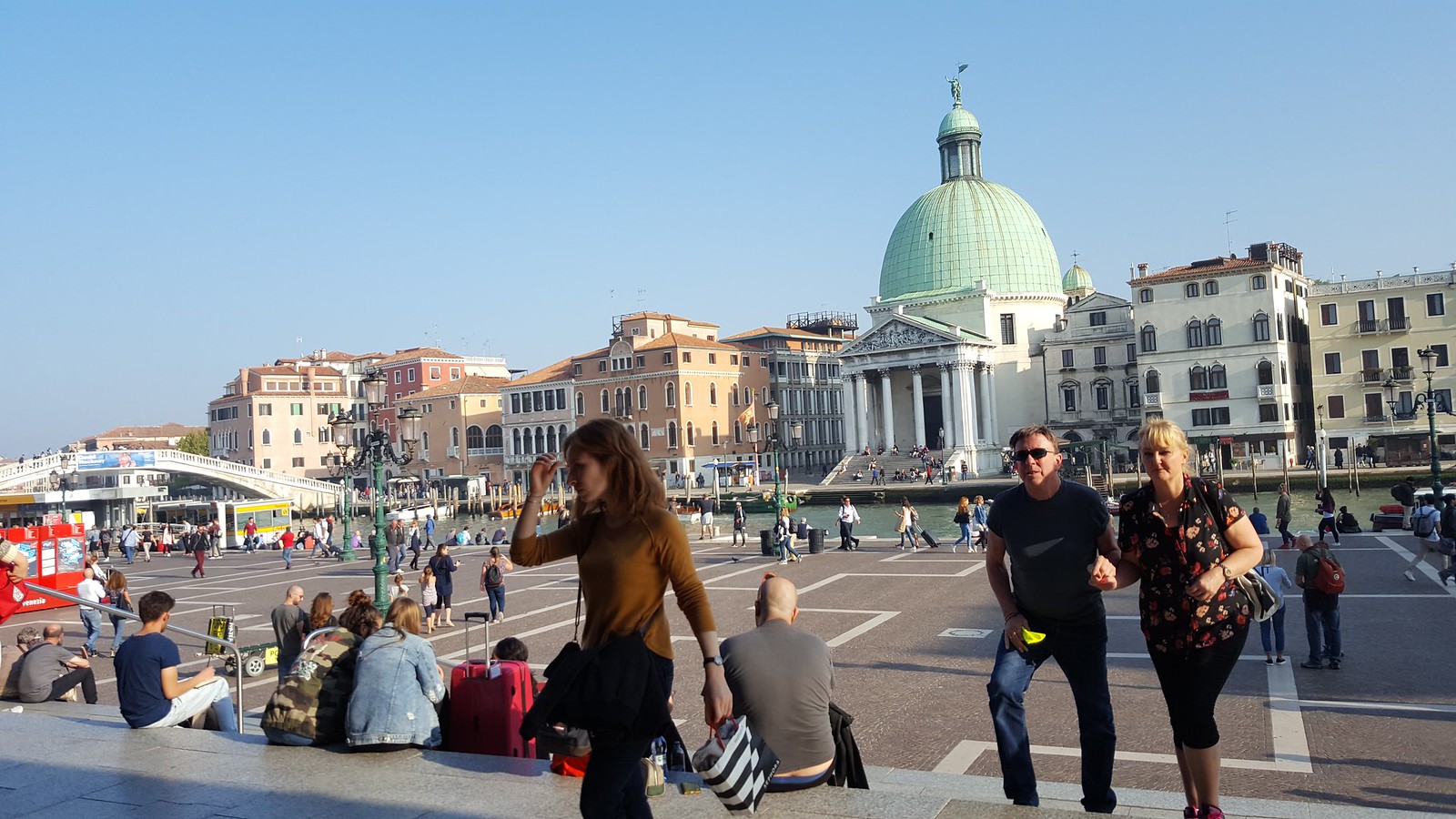 Right out the gate, Venice does not disappoint. The church of San Simeon is literally the first thing most people see when they leave the station. It’s gorgeous and only a taste of what’s to come. 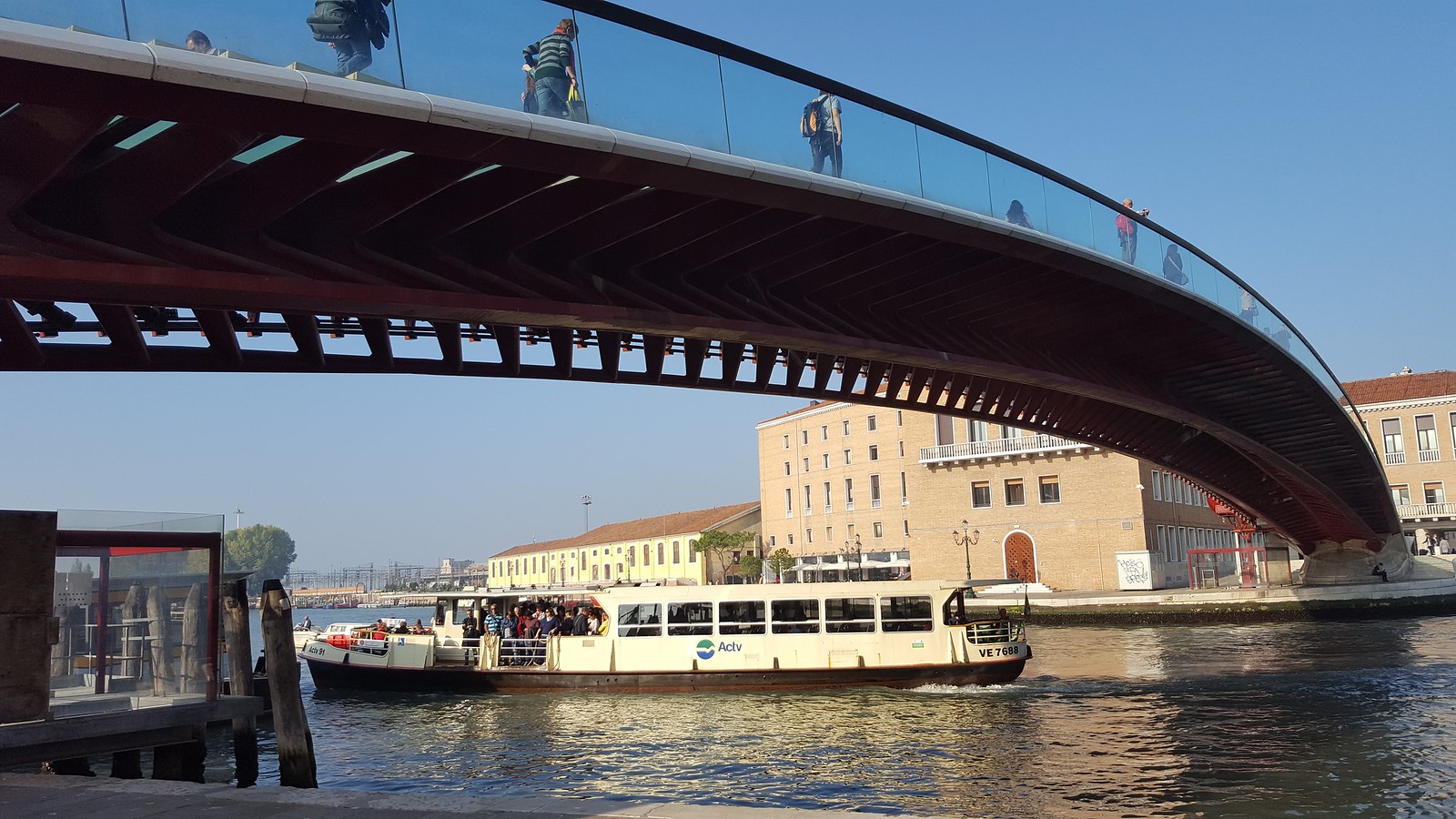 There are a few ways to get to the inner islands – all of them are connected by bridges, with a bus ferry, or with ferry taxis. The ‘bus’ is actually fairly expensive, and the distances are short. With so much to see the natural choice is to walk everywhere. If we were here for a week or more, maybe the bus ferries would have been a more appealing option. 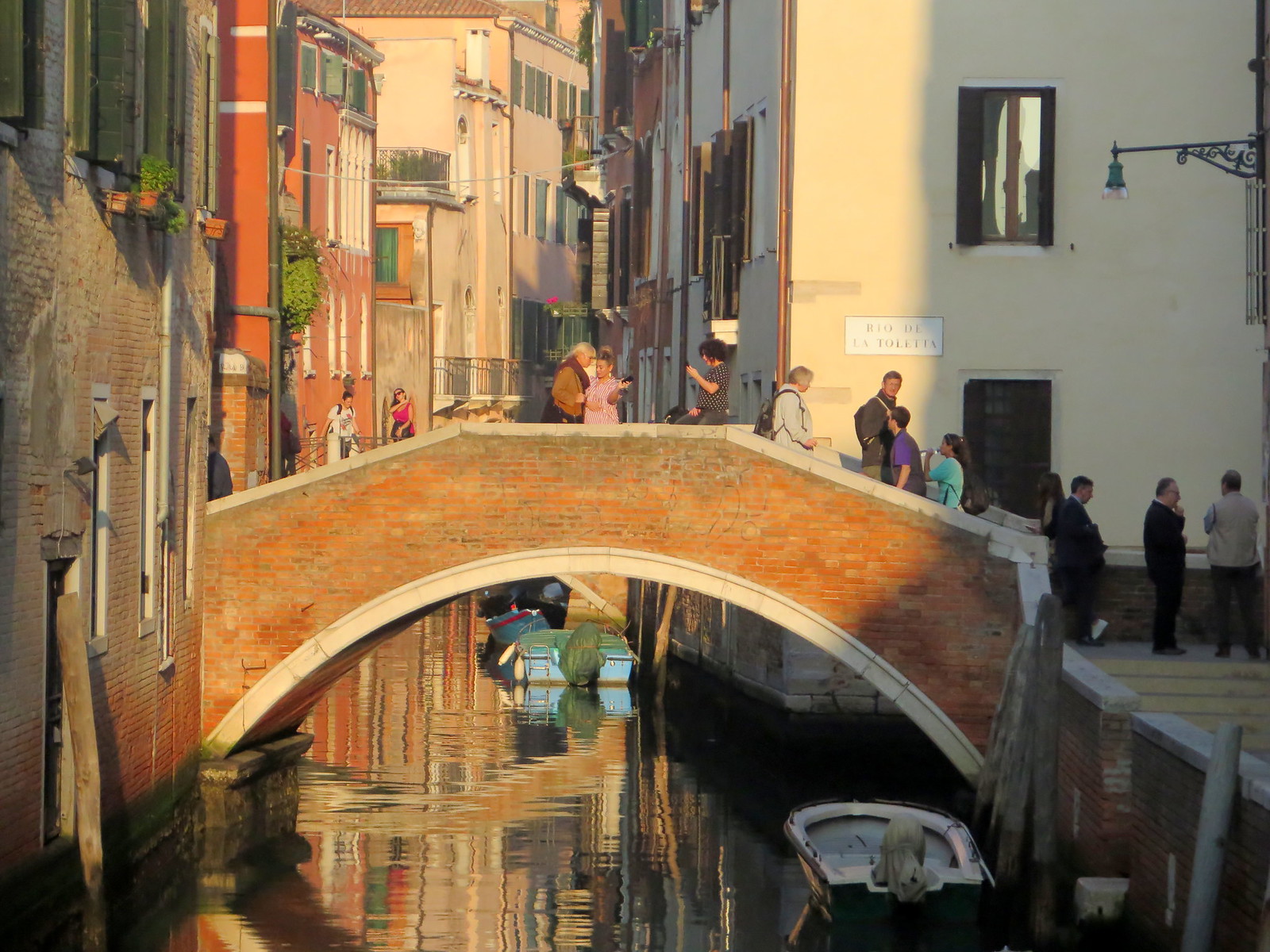 In the fading hours of the day we made our way to the hotel. Despite the day’s journey and the weight of the packs, we still lingered and turned in all directions staring at the city around us. In short order we were introduced to both the magnificent Italian architecture, the tightly clustered houses and apartments, and the occasional but persistent vendors of tourist things. 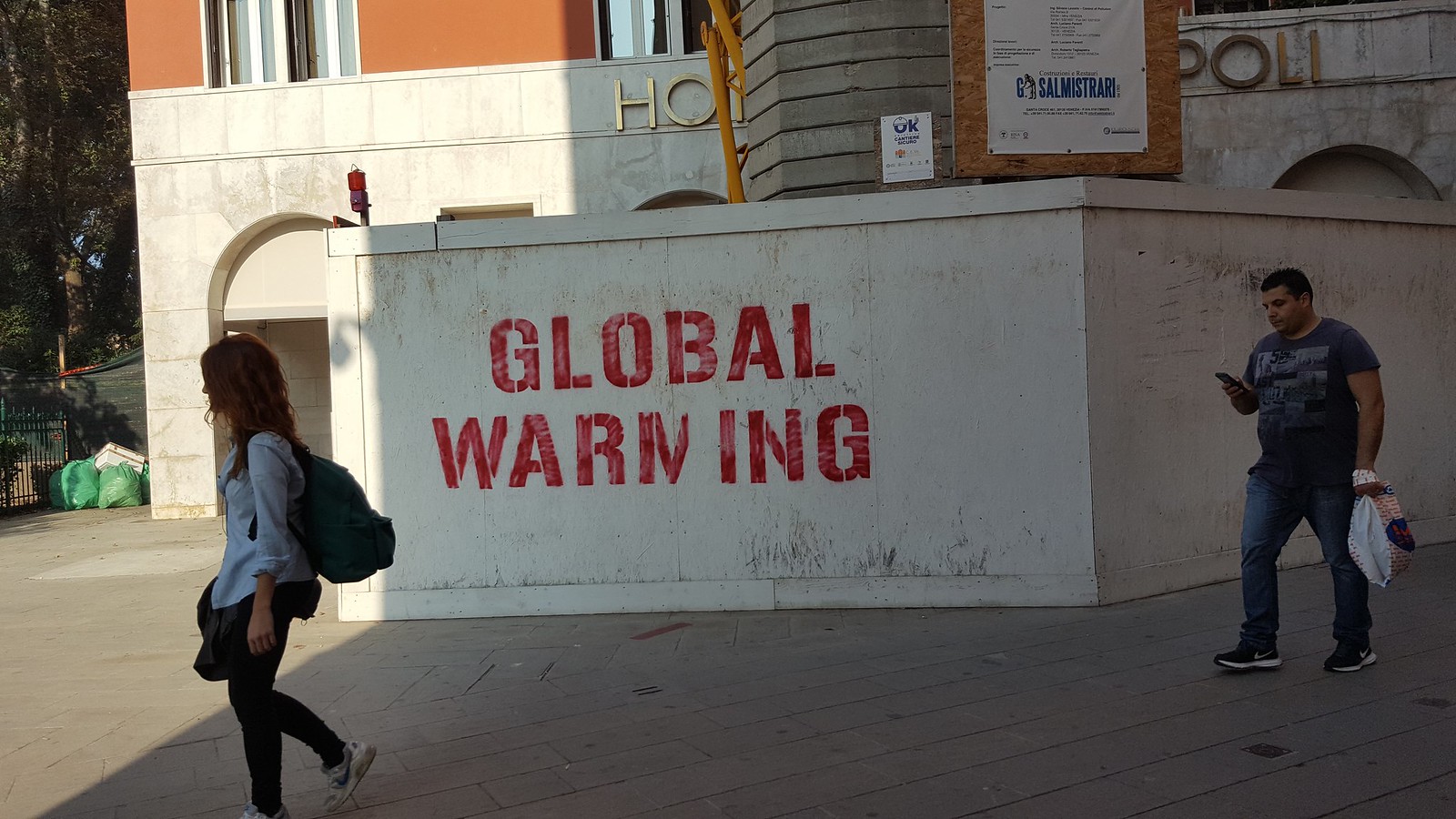 We also found that the city of Venice has an attitude, and the people are not shy expressing themselves on the walls. This was probably the largest demonstration we saw, but there are plenty of smaller ones scattered alone or in clusters around the city. The topics range from banning tourists to saving the planet. Perhaps unsurprisingly, climate change is often on the minds of those living here. 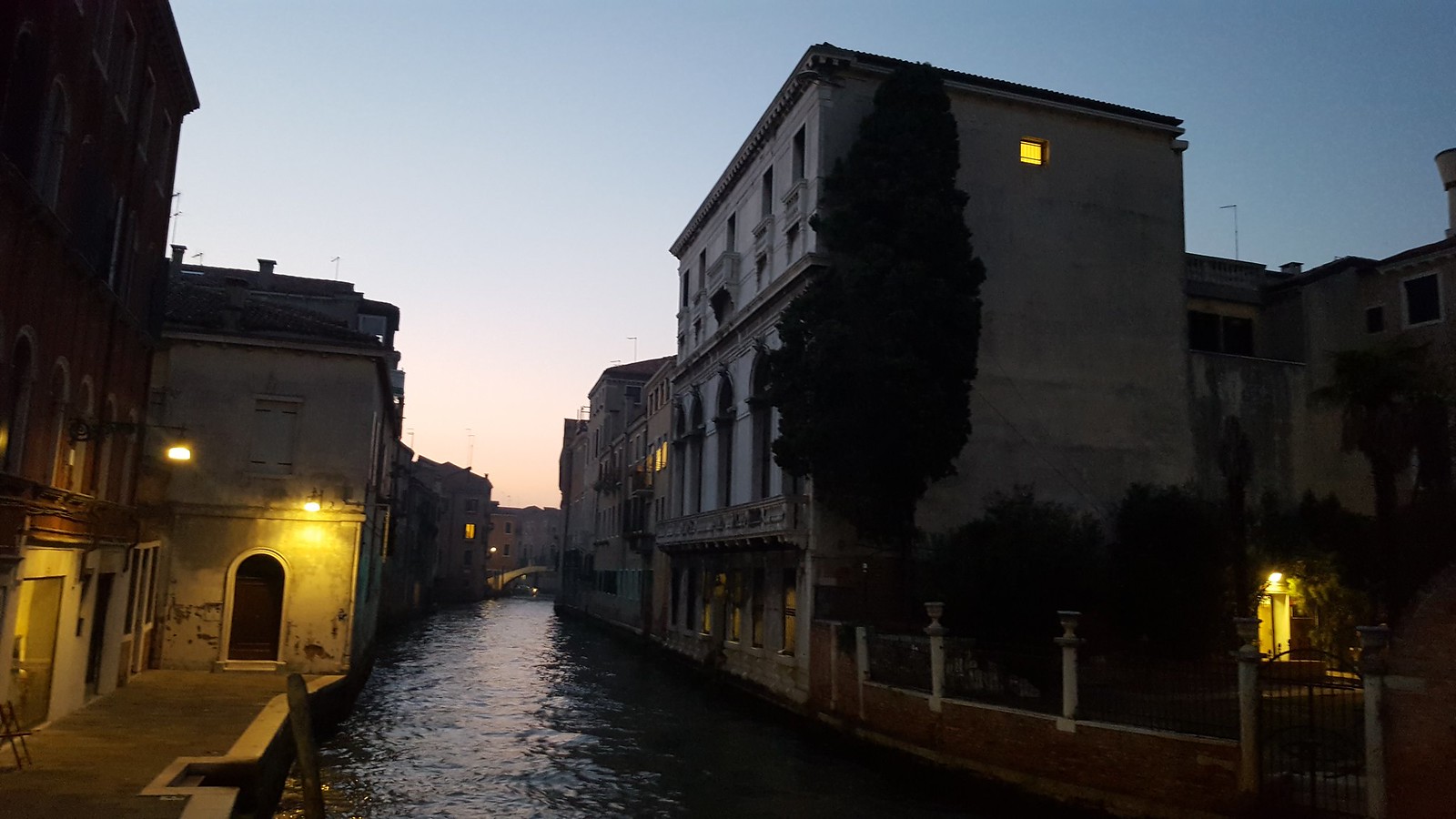 Night fell and we left our hotel in search of food. To set expectations, hotels in Venice are not very similar to most people’s idea of a hotel. Unless you pay a lot of money, it will resemble something of a walk-up, 2 to 3 stories of three or four rooms on each floor with a shared bathroom. Much like a hostel in any other part of the world. Similarly, the food is not reasonably priced. This is entirely expected in an extremely popular and difficult to supply city, but it’s good to be aware. 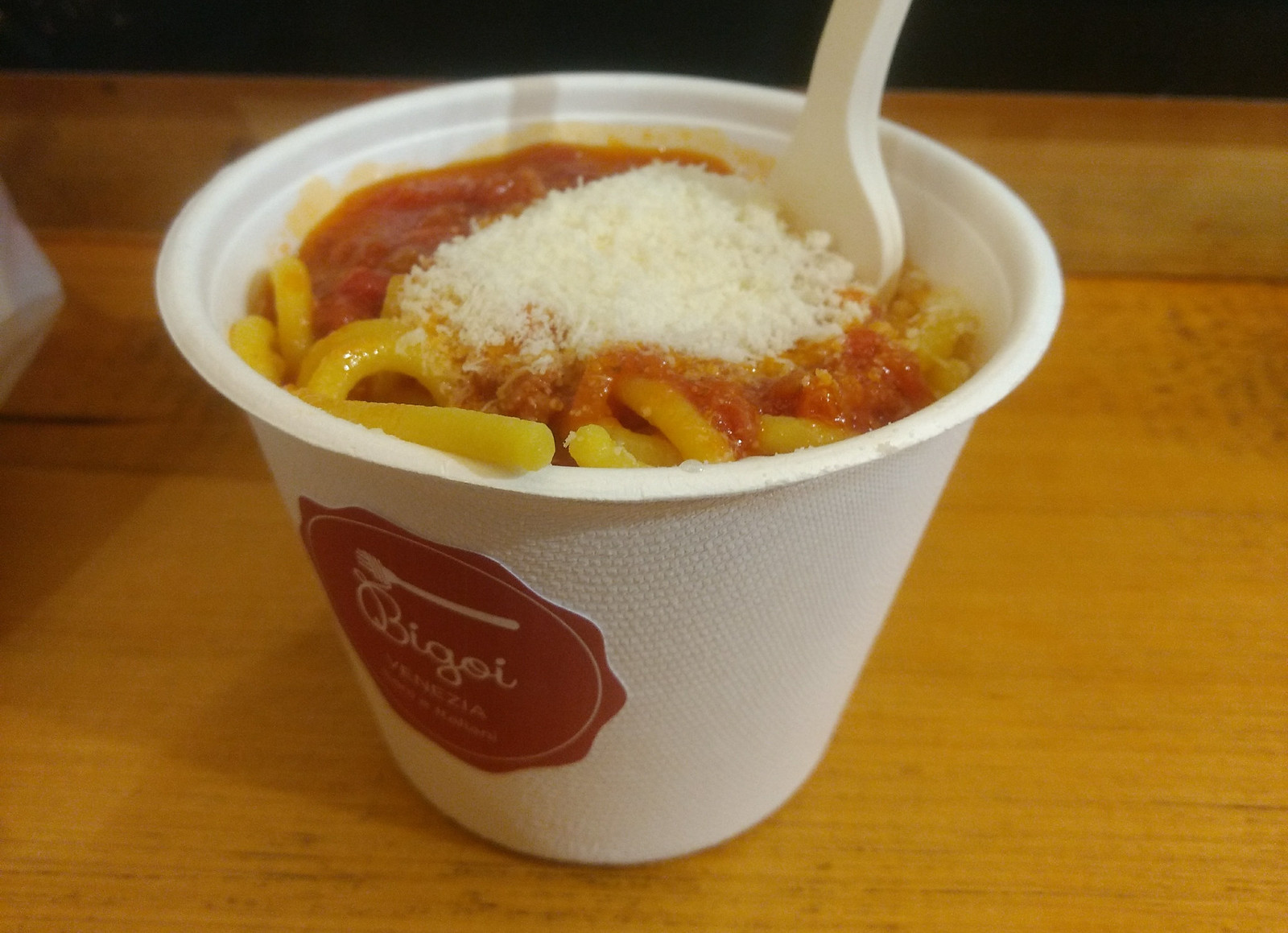 Luckily for us, right near our hotel was a Bigoi. This is a small, almost fast-food version of pasta, where you pick your noodles, sauce, and meat, and they make it fresh for you. It costs about 5 euros and each bowl is enough for a person. Not the best in terms of nutrition, but they taste great and they’re cheap! There are also small grocery stores available, but they still run fairly expensive, and they do tend to run out of key ingredients at night, especially bread. We relied pretty heavily on Bigoi and the snacks we brought with us while we were in Venice. 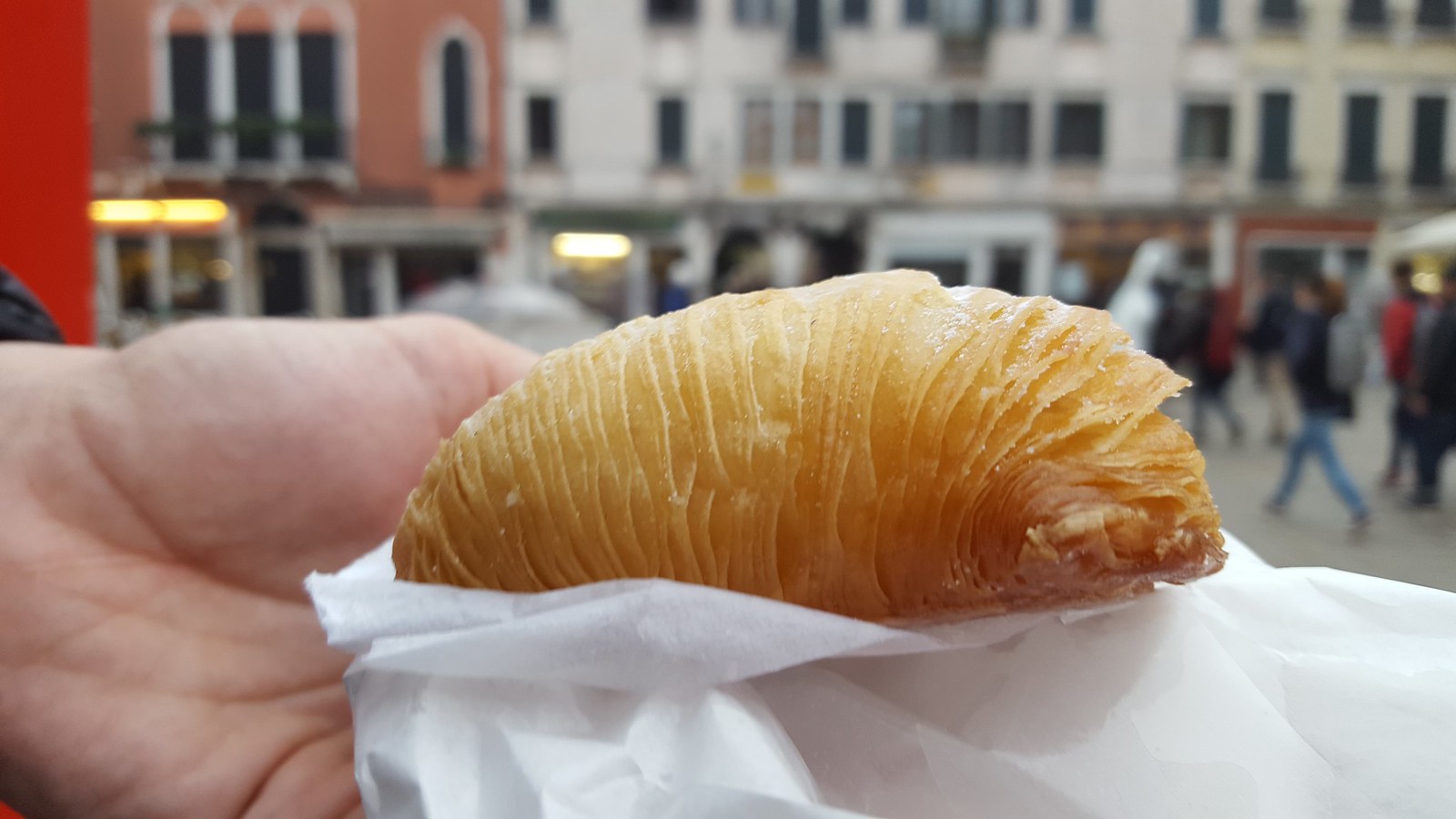 Also pastries. We didn’t eat a lot of fancy food in Venice but we did make room in the budget for coffee and pastries in the morning. The coffee is still very affordable – 1.20 Euro. The pastries can be a little expensive but are still around a few euro each. This one is called a sfogliatelle. It’s small, packed with cream and syrup, and somehow amazingly crunchy and flaky. It’s fantastic and we found the one we liked best was in the pastry shop Pasticceria Toletta. The lady working the counter in the morning is super nice, and their pastries and coffee are fantastic. 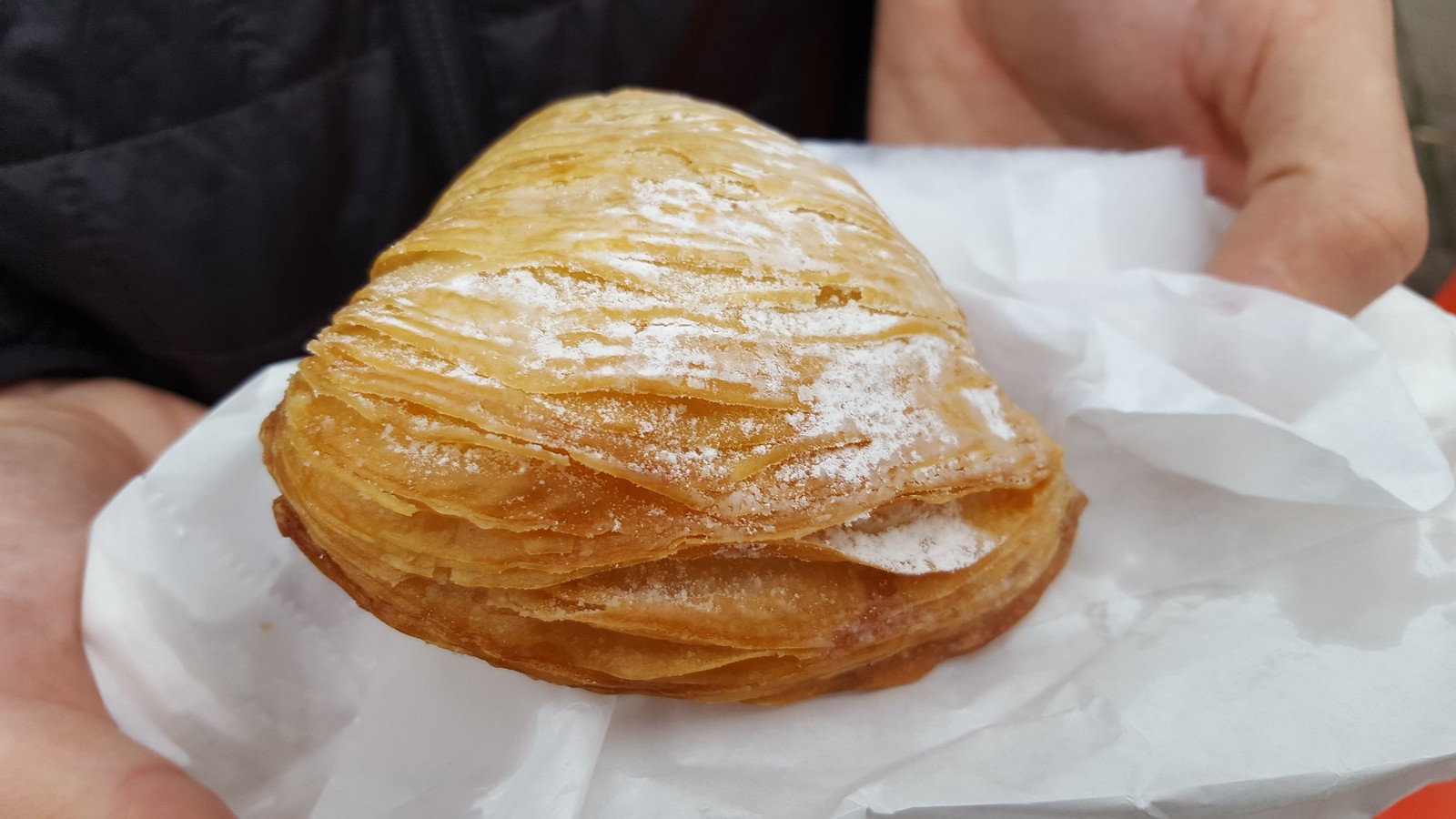