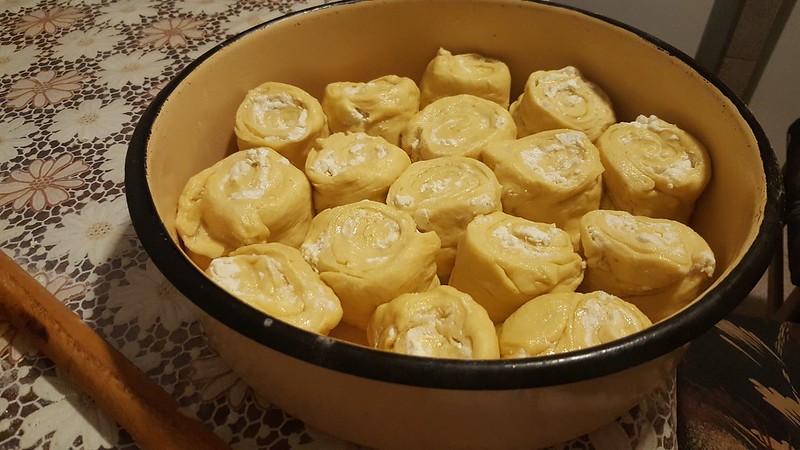 Lela Stanka has embraced our visit to Nikolaevo by cooking up a storm, and I’ve been watching carefully and taking notes. Without further ado, here are her gifts to us (and you), traditional home cooking from Central Bulgaria. We also got a jar of lutenitsa as a gift from Lela Stanka, but that’s ours and we’re not sharing. 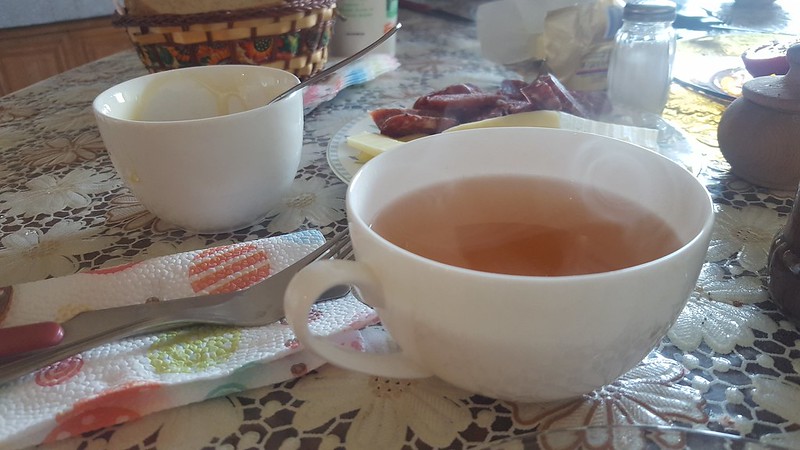 A ubiquitous recipe throughout European cultures that has been mostly forgotten in the present day but makes the perfect entry into foraging and wild food. Wild rose hips collected in the late summer and autumn are steeped in hot water overnight to make a tangy, floral tea.

This traditional Bulgarian pepper spread is AMAZING. This spread pairs well with practically anything savory, from rice and bread to eggs and meat. It’s like the Ajvar that’s served in much of the Balkans, but better (I may be biased). The best Lutenitsa is homemade, and while we didn’t have time to make it with Lela Stanka, I did get her to share the family recipe:

– 100 sweet peppers, about as big as an average adult hand
– 2 small or 1 medium-sized eggplant
– 5-6 medium-sized carrots
– 1 8 oz can of tomato paste (note: hers is homemade and contains no salt, so she recommended lowering the salt content below to make up for salt in store-bought tomato pastes)
– 2-3 tbsp salt
– 3-4 tbsp sugar
– 3-4 cloves garlic
– 1 cup vegetable oil 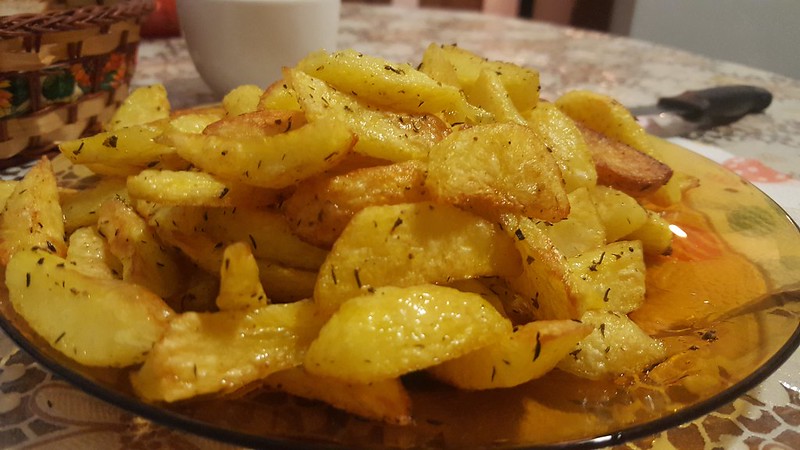 These are your standard roasted potatoes, but with Bulgarian spices and seasonings. 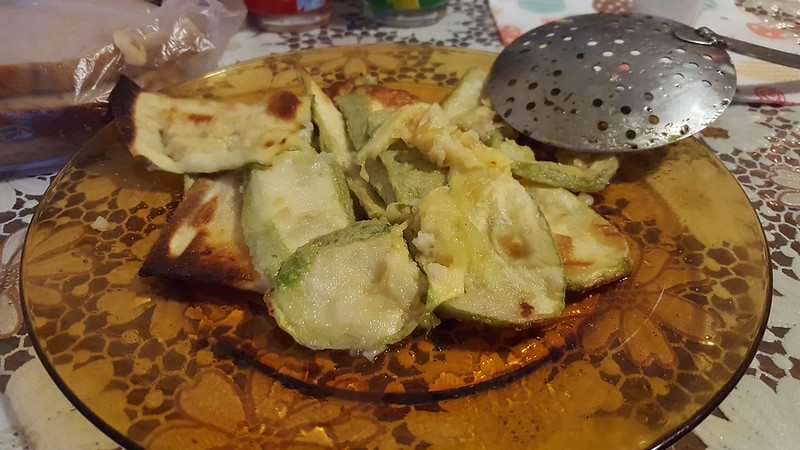 When you want to eat veggies but don’t want them raw in a salad or boiled and limp, breading and roasting comes to the rescue! The spices used in village potatoes (above) could also be used here. 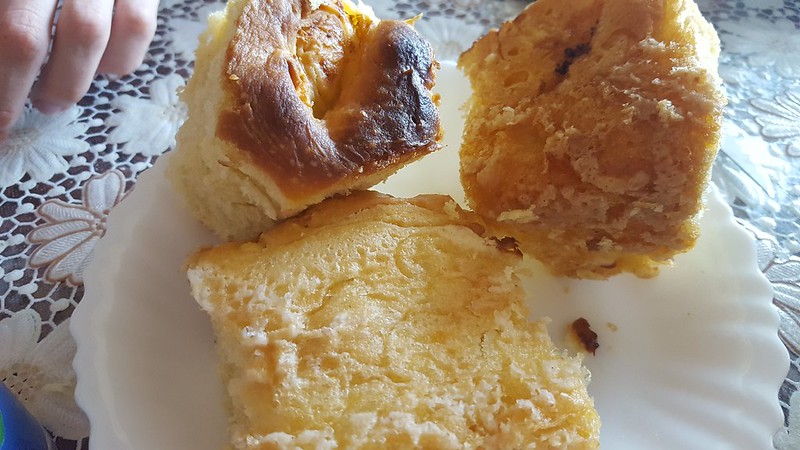 This bread is one of Stoytcho’s favorite childhood memories. It’s like a savory cinnamon roll filled with feta cheese. A few non-traditional twists on this (like adding dill or other herbs with the feta) would probably also be delicious.

For those who found the assembly description confusing:

Below is the step-by-step of assembly in pictures. I suspect this assembly method would also work wonderfully for babka, cinnamon rolls, or other such rolled desserts.

Zona Rosa is Medellín’s happening tourist spot, with all of the hippest shops, bars, and restaurants. Stroll down one of these streets and you could easily imagine you’re in Brooklyn, Los Angeles, San Francisco, or any other major metropolitan hub. And while the prices definitely reflect the area, clocking in around 1.5-3 times that of other places in the city, they’re still highly affordable if you’re coming from a country like the U.S. or Canada.

We spent most of our time in Zona Rosa enjoying the relative comfort of the Panela Hostel 2 and eating amazing food. We covered the delicious dessert options of Zona Rosa in our previous post. This post will cover awesome main meal options we discovered: two restaurants offering traditional foods, and one spotlight on a great health/vegetarian restauarant. Regardless of what you choose, get ready to eat to your heart’s content.

There are two must try’s here: the Mondongo and the buñelos.

Since the locals almost always know best, we asked around for the ONE thing we should try in Zona Rosa before leaving. And every time, from the kids in high school to the abuelitas out for an afternoon stroll, we got one answer: get the Mondongo at Mondongo’s.

Mondongo’s is an institution in Medellín, serving up hearty soups and grilled meats to the hungry Colombian locals. On the afternoon we wandered in, we found a quiet patio with attentive waiters. They even insisted on helping us put our bags on to the chairs instead of on the floor:

When it came to ordering, we were a bit nervous because Mondongo’s was really expensive by Colombian standards (a Mondongo costs around $10 USD, or 30,000 COP). Wondering if we could share, we asked the waiter about the size of the Mondongo and he pointed over to a nearby table with a bucket-sized bowl of soup, a plate of rice, slices of avocado, bananas, and arepas. We had to double check that was indeed one order. We asked to share, and even then we couldn’t finish the whole thing. The great part was that while we were struggling to finish our food, a pair of abuelitas came in, each ordered a Mondongo, and demolished them. They were tiny, so I have no idea where that food went. Perhaps their stomachs were part of some kind of space-time distortion.

As for how the Mondongo tasted, here’s the best description I can muster: a rich, meaty tomato broth, loaded with FOUR kinds of meat (beef, pork, chicken, and tripe), potatoes, and onions. You’re supposed to dump the rice, avocado slices, and banana slices directly into the mix, but we ate them in separate spoonfuls for a delightful contrast in flavors and textures.

Recommendation: Bring a friend. You’re going to need their help against the massive Mondongo.

The second must try are the buñelos from Buñelos supreme, a tasty deep-fried breakfast treat made of  flour, tapioca flour, and cheese. At 500 COP (17 US cents) a pop, it’s easy to down 5 or 6 of these for breakfast alongside an egg-filled arepa.

And since people regularly come in and order 30 at a time, you can watch them being made all morning:

Note that buñelos are sold at practically every bakery in Medellin, but Buñelos Supreme is where we found the best.

Recommendation: If you’re a lover of deep-fried breakfast treats, pull up a seat here and a few buñelos with a fried egg arepa and drink of your choice—I’d go with a hot Milo.

Finding vegetables can be hard while travelling, even when you’re not looking to eat exclusively vegetarian food. Plates at restaurants tend to be meat-centric and occasionally come with a sad lettuce-and-tomato vegetable pile, although more often they’re heaped with fries. After the meat fatigue, we were delighted to come across an entirely vegetarian restaurant in Zona Rosa by the name of Lenteja Express. It serves vegetarian starters, burgers, and wraps made from lentils or chickpeas.

We went a few times and had the ceviche (which was a beany, mango-y, salsa-y wonder), burgers (great flavor, but they haven’t quite worked out a way to keep the patty moist), and burrito (seriously huge, share it). The biggest highlight though was the humble side dish of griddle-cooked baby gold potatoes, called papas criollas, which by some witchcraft of spices were elevated to a dish fit for kings. On one occasion we just ordered a whole plate of these potatoes and shared them doused with the equally amazing whole grain mustard that Lenteja Express has on tap.

Recommend: This is a must, if only to try the amazing seasoned potatoes with (what I would guess is) homemade whole grain mustard. If you’re getting a burger, pay extra for guac or douse it in another sauce to combat how dry the veggie patty can get.

If you can’t pop down to Colombia to try these amazing foods, here are a few recipes to tide you over. Since we’re still on the road and don’t have much of the way in kitchen supplies, we haven’t been able to taste-test them ourselves. But given the ingredients, they look like the real deal:

Recipe for mondongo – Disclaimer: there are TONS of different recipes for mondongo online, and each varies in the meats, vegetables, and spices that go in. I suspect this is one of those each-grandmother-has-her-own-way type dishes. This version was chosen because its ingredient list looks the closest to what we had at Mondongo’s.

Recipe for papas criollas – We asked Lenteja Express’s owner how they made their papas, and got the following instructions: take small gold potatoes and season with rosemary (romero). Place them on a hot griddle (a la plancha) for a few minutes, then put them in a bowl or bag, douse with paprika and salt, and shake/toss to coat. Or you could try the Serious Eats recipe here.