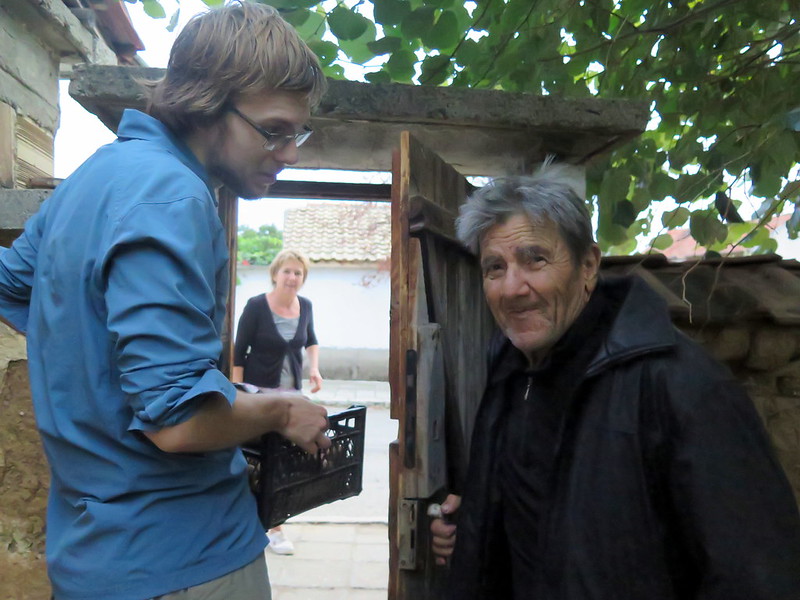 It’s harvest season here in Nikolaevo and Lela Stanka has relented to our requests to help her out on the Stoytchev farm. The first day we pick sweet peppers from rows of densely-packed plants. The plants sag from the weight of the peppers, some brilliant scarlet, others in stages of green and orange. We pick only the darkest reds, leaving the rest for Lela Stanka’s next harvest. She grins as she tells us that she’s already harvested peppers from these plants a dozen times. But there are always more peppers. 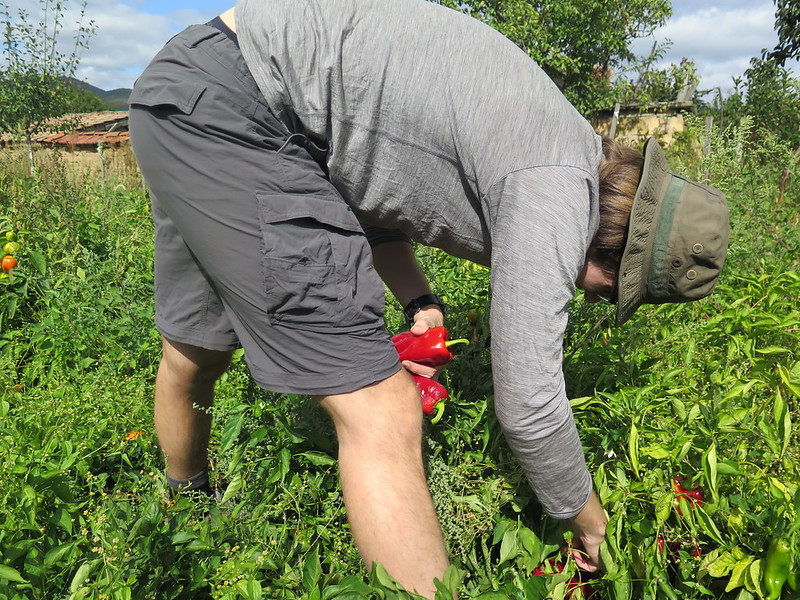 By the end of an hour, we’ve filled an entire 20-lb. sack with peppers, soon to be roasted and peeled and turned into delicious meals and preserves for the winter.  I’m personally hoping for lutenitza, a Bulgarian variant of red pepper spread that pairs beautifully with everything from bread to eggs to meat to yogurt. Seriously, it’s good on everything, ok? Don’t worry, a recipe is coming (in a later post). 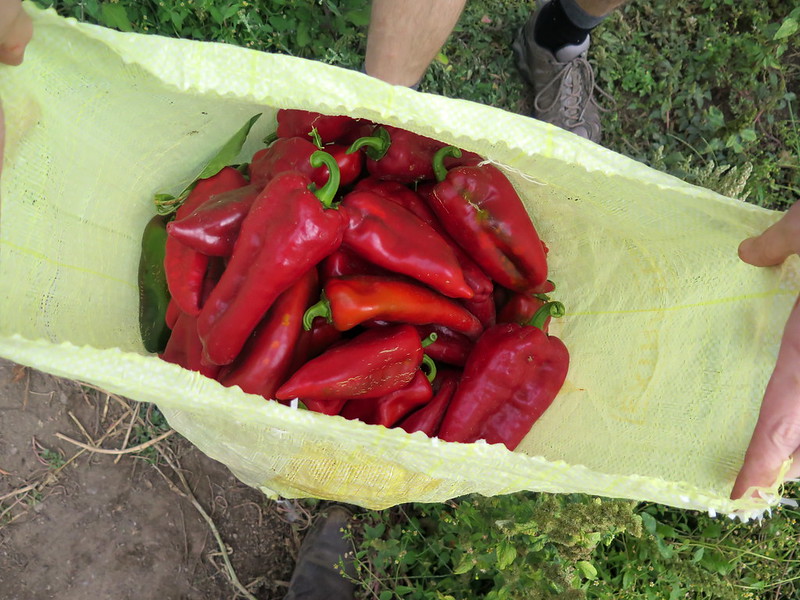 We return the following day to harvest potatoes, a slightly more complicated task that involves digging and dust. Harvesting the potatoes well takes effort, and Lela Stanka shows us how to dig between the rows of shriveled potato plants to find the potatoes hidden beneath the soil without accidentally slicing too many in half. 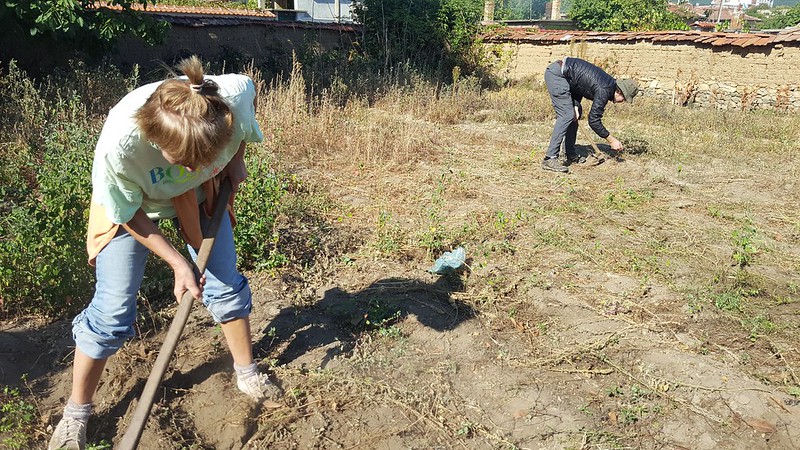 The dry summer has been hard on the potato crop, and this year’s yield is supposedly a modest one. Busy with chores and unworried they would rot in such dry weather, Lela Stanka left them in the ground. With a few hours of hoeing and digging, though, we’ve littered the ground with an abundance of potatoes. Most are red-skinned, and as we collect them Lela Stanka remarks on how well they’ve done. “They’re a family heirloom, passed down in the family and planted for decades. I’ll plant them again next year too.” We finish gathering the potato into sacks and boxes, store them in a nearby shed, and head home to scrub the dirt from our hands, feet, and faces. 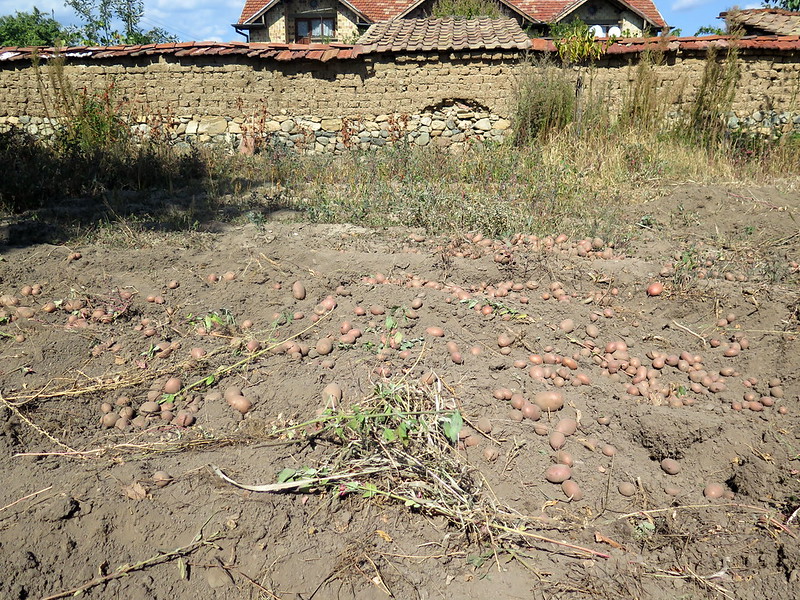 Later, when we speak on Skype with Stoytcho’s dad, we tell him about our work on the family farm. He worked the farm when he lived here too before moving to the U.S. to pursue a PhD in physics. He probably hasn’t done farm work in decades. But when we mention our potato harvest he pauses, then replies, “Potatoes? It’s a bit late in the season for that, isn’t it?” 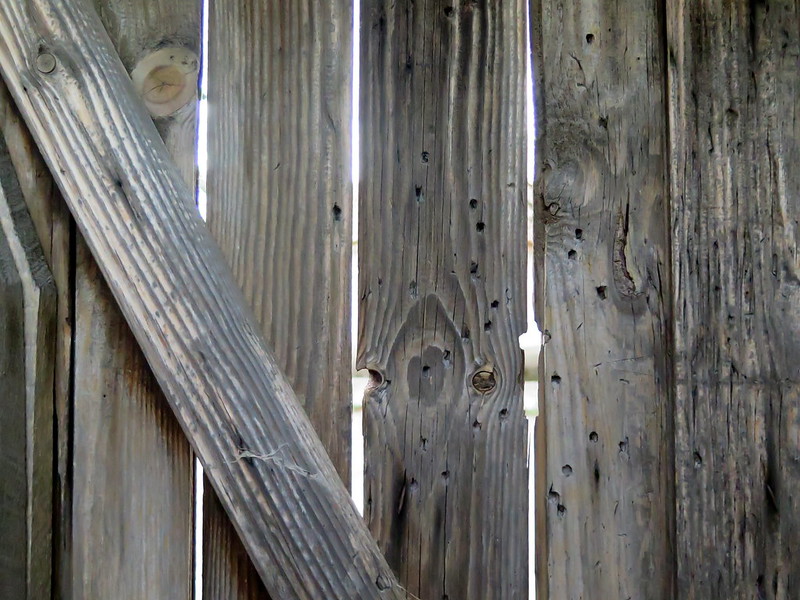