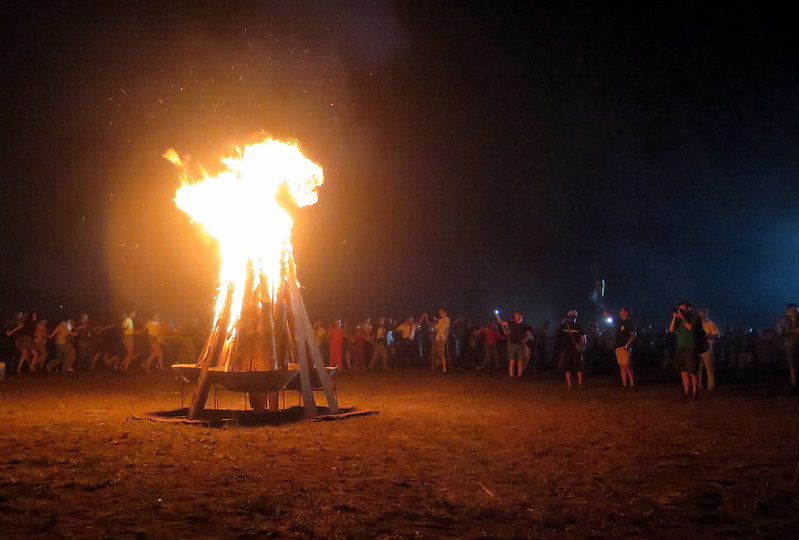 Want to experience Ekhor Night and learn to dance Yohor for yourself? The 2018 festival will be July 14-15 at the Ulan-Ude Ethnographic Museum.

Our first week in Russia I caught the flu. We meant to leave for Lake Baikal a few days ago, but I won’t be strong enough for another day or two. In the meantime, one of our hosts at the hostel tells us about an upcoming Buryati Dance Festival at Ulan-Ude’s Ethnographic Museum. “You should go! It will be fun,” she tells us cheerfully. She helps us find the bus schedule to the place, and the day of the festival we find ourselves catching jam-packed minivan that serves the museum bus route. 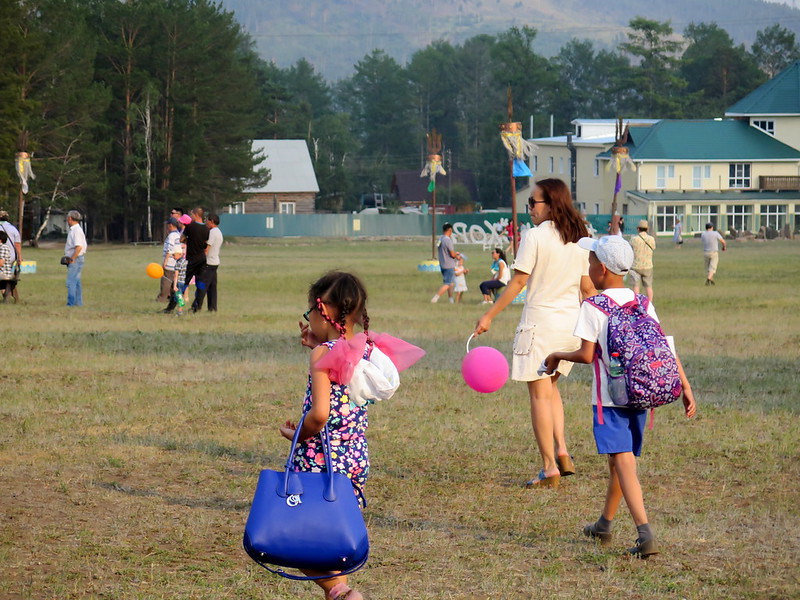 The atmosphere is festive when we arrive at the museum grounds, where we pay 200 rubles per person (~4 USD) for entry. People are lined up to get food and kvas, to play games, or to take turns in bouncy houses. 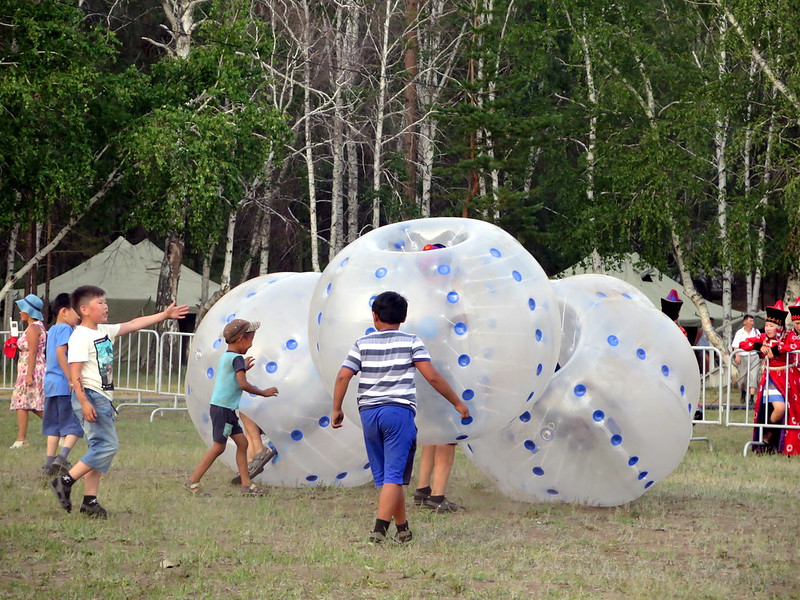 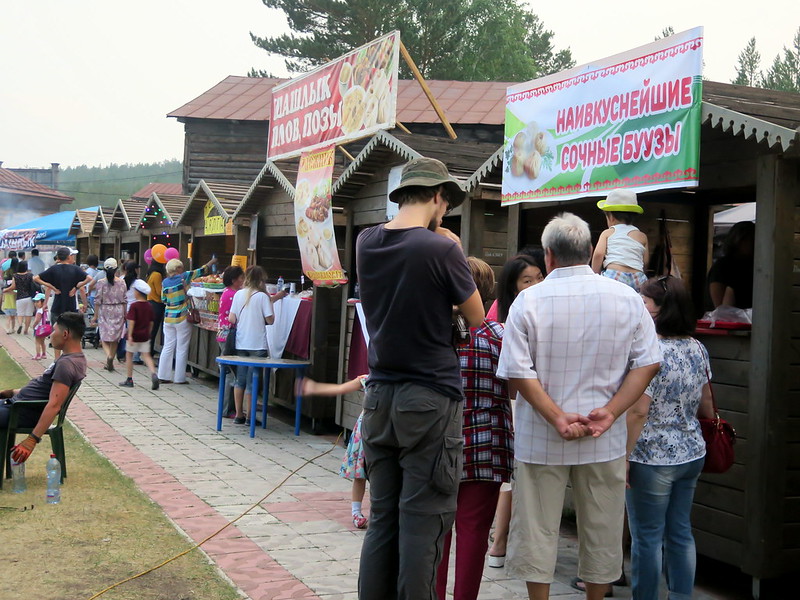 A small crowd sits in front of the stage, where performers dressed in traditional attire sing and dance. We watch for a few sets, though we don’t understand jokes when they’re made or the song lyrics—everything is in Buryat, not Russian. But it looks so much to me like what I’ve heard and seen at the University for Minorities in Chengdu, where students gather nightly to practice the dances of their ancestors, gathering in a circle and going through the steps, skips, and hand motions. 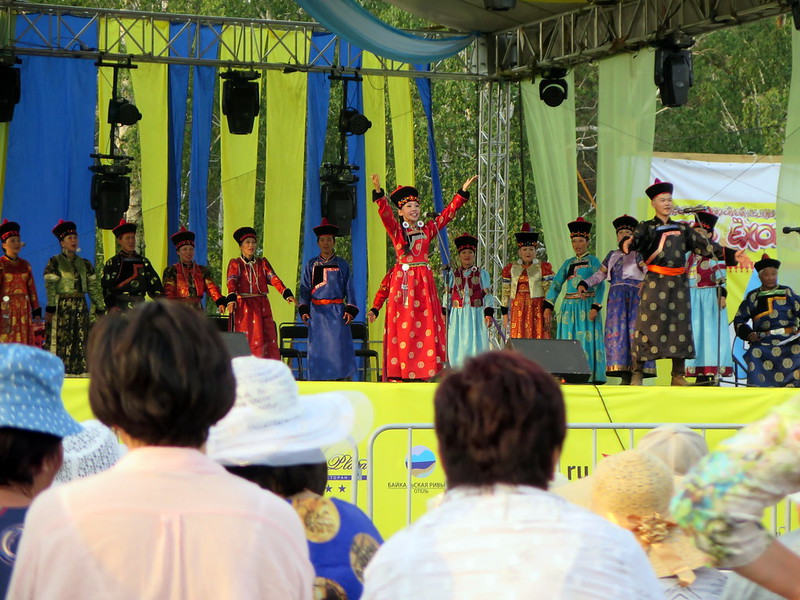 As the sun sinks lower, we peel away from the stage to walk through the museum grounds, which are covered in dense pine forest and dotted with exemplary buildings from the nomadic tribes, the early peasants, and the first European settlers in Siberia. Four-sided wooden buildings lie within steps of rounded yurts. An Orthodox Chapel sits on the museum grounds, while in the forest you can find granite stones inscribed with teachings of Tibetan Buddhism. It’s a mix of east meets west, of fur skins wrapped around yurts for insulation and four-post brass bedframes with mattresses and sheets. 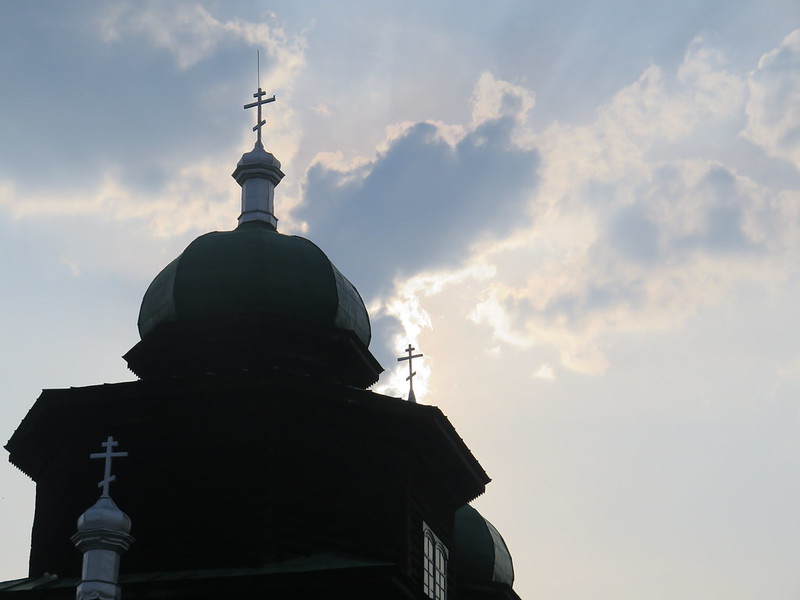 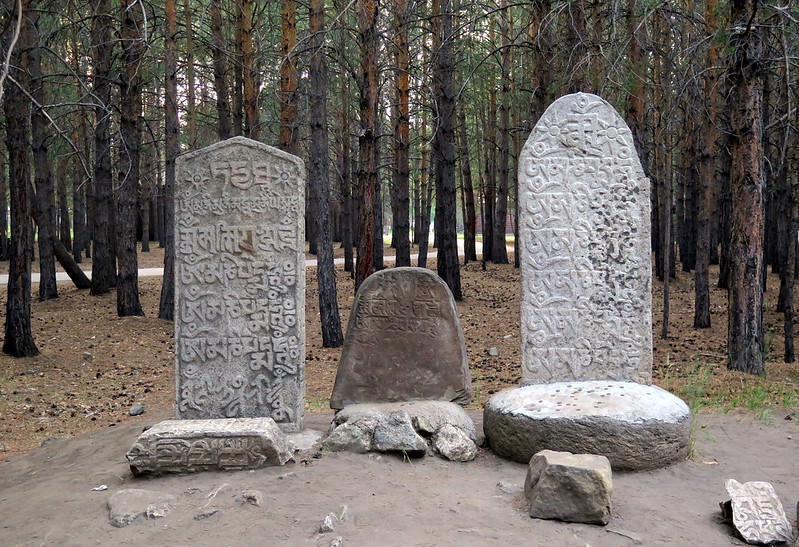 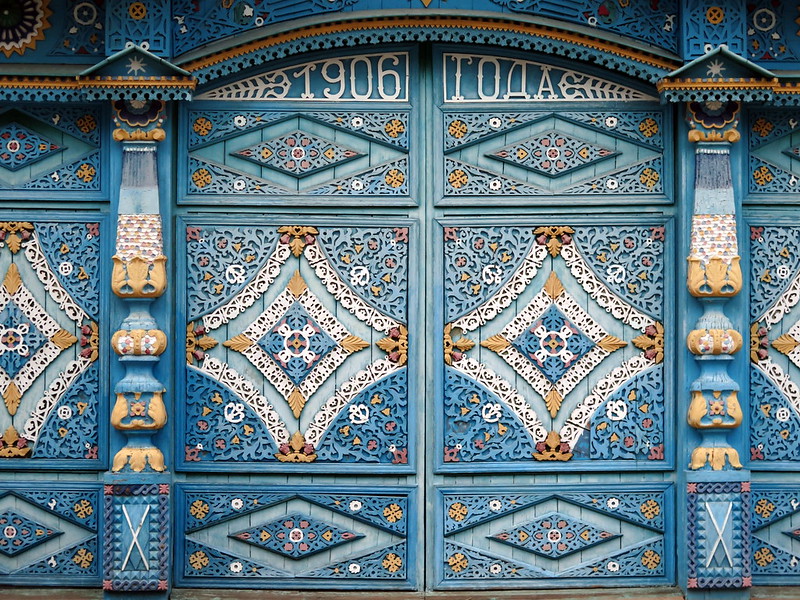 After sunset, we return to the stage and find it surrounded by a huge crowd waiting for the real show to begin. The last of the performers complete their acts, followed by a hurried transition. Two young people take the stage, and they address the crowd in Russian and Buryat. They thank us for coming and admire how much the festival has grown in the few years it has been alive. They talk about the festival’s origins and its goal to keep the Buryati culture alive. Then they tell us all to spread out: it’s time for the real festival to begin. We’re going to learn Buryati dance. 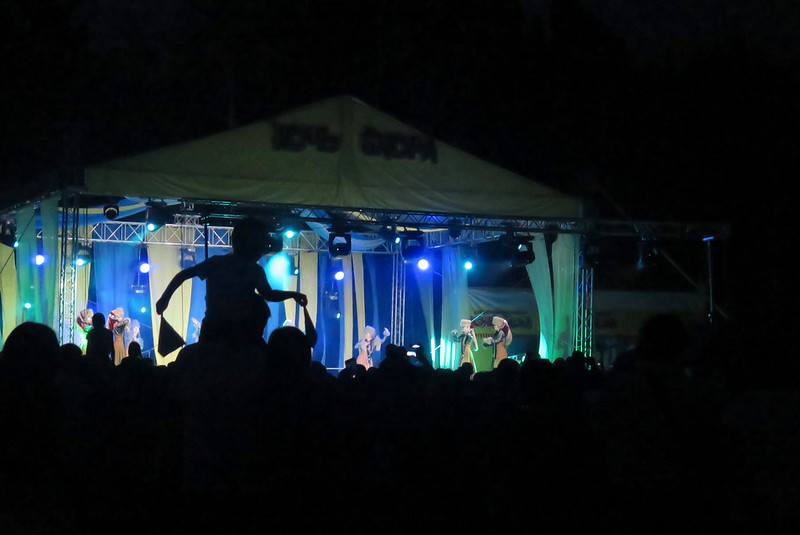 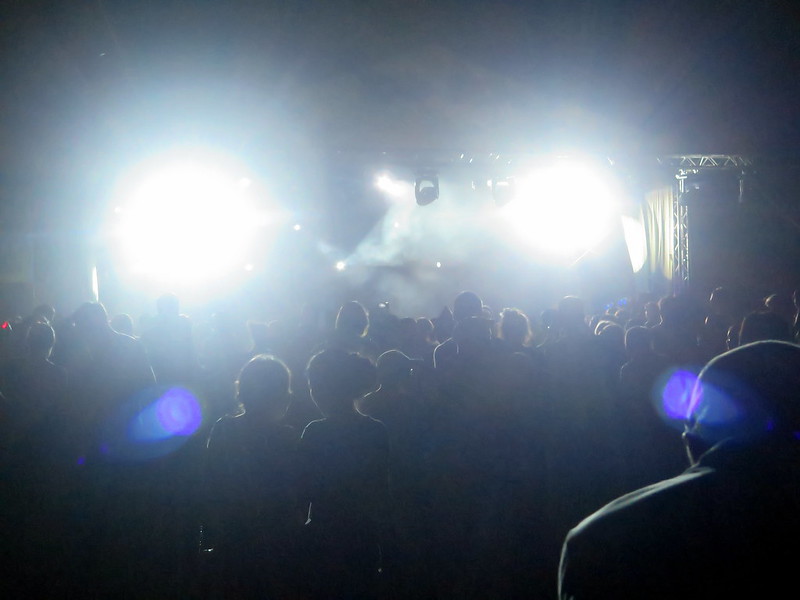 The crowd ambles away from the stage, arranging itself in huge uneven circles and ellipses in the field. Stoytcho and I remain together, a miracle considering I can’t understand anything being said from the stage. But I don’t need to. Our two onstage hosts demonstrate every dance step along with the Russian- and Buryat-language instructions, and I watch them and the people around me for dance cues. Three steps, point right foot out and stomp, pull back, three more steps, repeat. Switch directions. Repeat. We kick up dust as we move, people shuffling and stumbling over the steps for a minute. 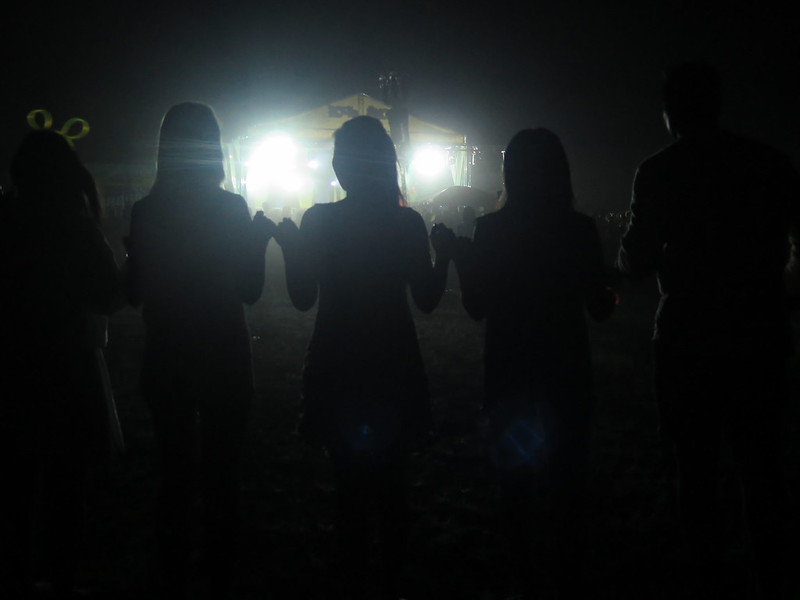 Then our hosts announce it’s time for the dance. We link pinkies with the people beside us and have at it, step step step stomp step step mistake correction catchup repeat. Our hosts pause us and add a new step: a run. We’re now a thread of people stepping, skipping, stomping, running mostly evenly and sometimes unevenly around our circle, mostly linked by our pinkies but occasionally losing connection, kicking up dust that floats up to fill our shoes and clothes and the air. 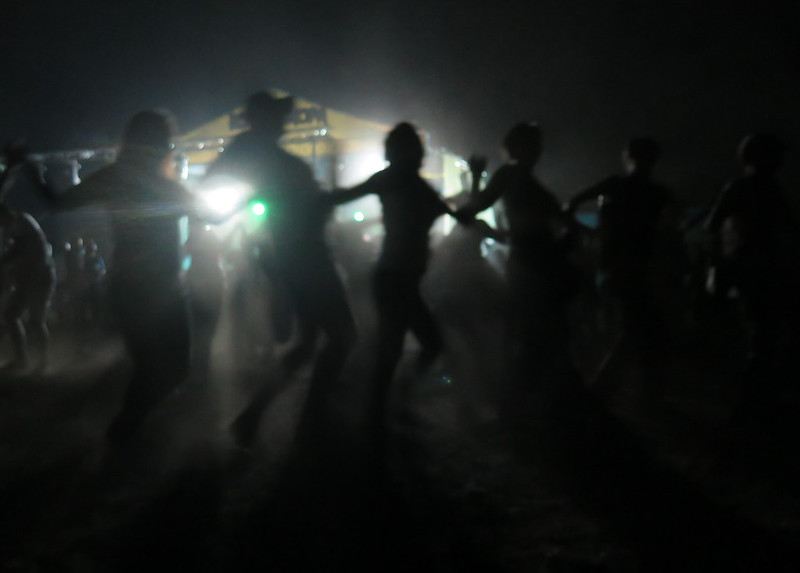 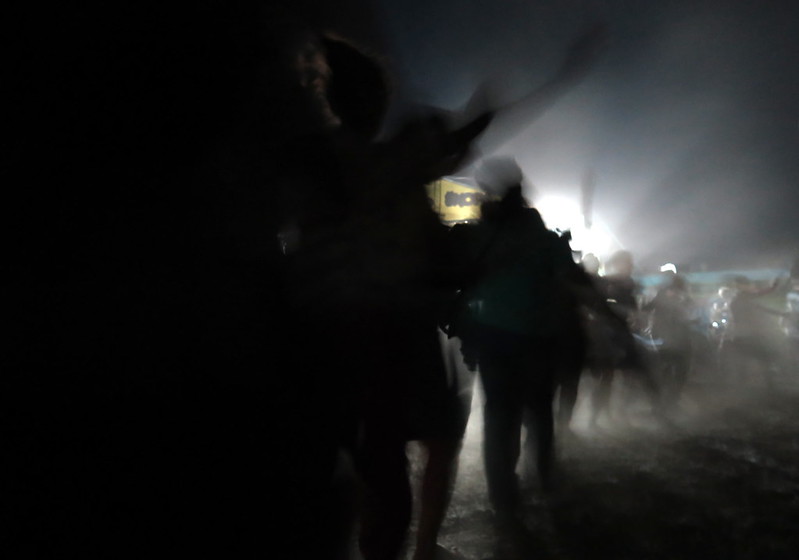 We continue as a whirling flock of humans, practicing several different dances that start with simple steps and become more elaborate performances. Stoytcho and I gain some proficiency, able to time our movements with the crowd, though we’re exhausted and can feel grittiness in each breath. Our hosts on stage call a stop to our last dance and ask us to make concentric rings around piles of wood arranged nearby. A man with a torch enters our ring and touches it to the woodpile, creating a plume of fire as it lights and illuminates our faces. Dance volunteers take their position around the circle to guide us, waiting for the signal. This is the true test of our dance mettle. 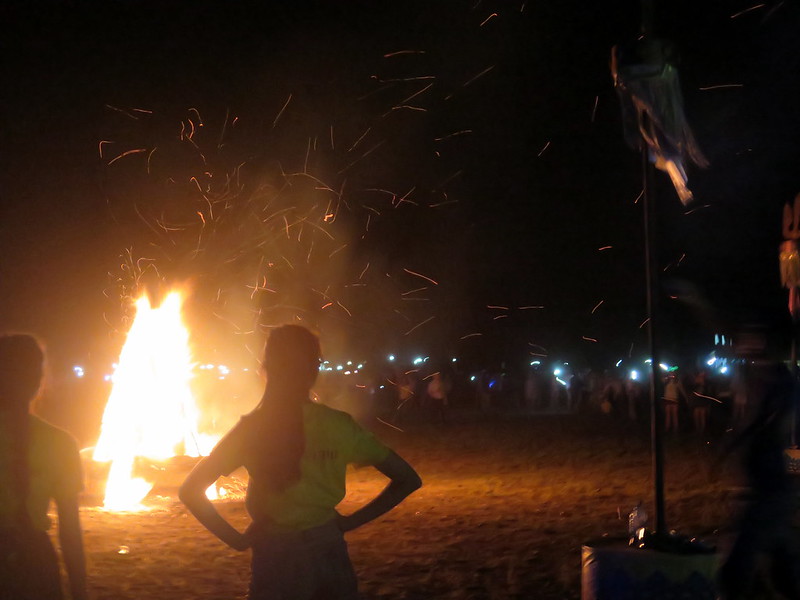 Our hosts shout something and we’re off, starting, stepping, stomping, skipping, sprinting, and stopping, following the volunteers’ lead with linked arms and laughter.