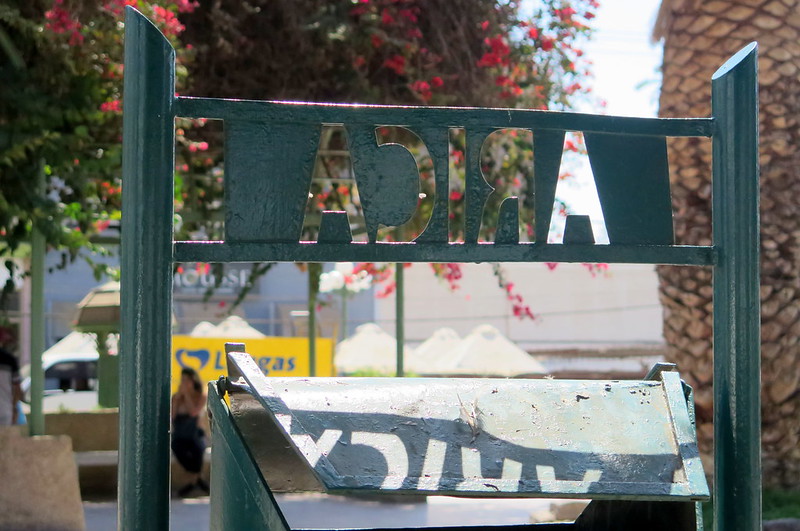 Sandwiched between the sands of the Atacama Desert and the Pacific Ocean, Arica can best be described as a desert city with a beach. Though it sits at the nexus of two fertile valleys fed by the Lluta and summer-running Azapa rivers, they do little to quell the sweltering desert heat. For most people, Arica is a stopover while travelling from Peru to Chile, especially to Iquique in the south or the Atacama Desert in the east. But the town has its own beauty.

Five nearby rivers act as water sources for Arica, enabling plants to flourish in spite of the heat. Palm trees and grassy parks line the city’s main streets, giving it an oasis-in-the-desert feeling.

Shipping and transport are major activities in the city, with the city acting as both a maritime port and a stop for freight trucks from Bolivia and Peru.

When we visited the main thoroughfare, we noticed a group with speakers and microphones outside of the grocery store. They were calling for donations of food and water for the region of Maule, which had recently been devastated by forest fires.

The city’s largest landmark is El Morro, a massive sandstone cliff to the south of the city. The top of the cliff is home to monuments to the Chilean (republic?), a museum, and a massive bronze statue of Jesus. It also offers sweeping views of the ocean and the city, and a chance to see scores of turkey vultures soaring on thermals or resting on steep rocky ledges below.

The shimmering ocean and desert haze combine to make some of the most stunning ocean sunsets imaginable. Climb to the top of El Moro in the lengthening shadows, after the heat of the day has passed, and enjoy the view from the top.

Sure, Arica isn’t a standard tourist destination. There aren’t any brand name hotels, and no specific must-see attractions. But it’s a place worth visiting if you’re not into running with the tourist hordes and just want to relax.