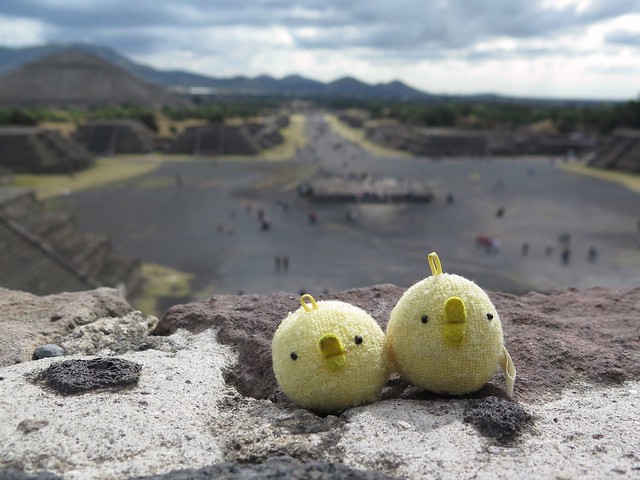 The ancient city of Teotihuacan is a day trip away from Mexico City by bus and an archaeological must-see. Built between 100 B.C. and 250 A.D., the city is a sprawling complex of massive pyramids, plazas, and dwellings for an unknown people known as the Mesoamericans. And although it was ransacked and abandoned between 550 and 800 A.D., Teotihuacan’s glory remained so great that when the Aztecs found the site around 1000 A.D., they named it Teotihuacan (translated: place with the road of the gods) and believed it the sacred site where the gods created the universe1.

There are a couple of great guides for getting there without an expensive private tour2, but the short of it is to take the metro to the Autobuses Del Norte station, then walk across the street to the bus terminal and buy a ticket at the kiosk that says Teotihuacan. The site is huge (20km2, or roughly 1/3 the size of Manhattan), so we prepared for the trip by packing water and food. What we totally forgot to pack was some extra cash! Stoytcho got in line at the ATM and I took the last of our money to buy tickets for the bus. It took all the cash we had to get two one-way trips (46 pesos/person). I went back to Stoytcho and found that unfortunately, the ATMs were shut down for service a couple people before he got to the front. Oops! Also, I looked down at our tickets and realized they were for a specific bus time, in three minutes! Double oops!

We ran to the security checkpoint in the bus terminal, then tried to find the correct bus, which proved pretty messy. We asked around for a bit, then a nice family took our tickets to one of the bus conductors and he waved us onboard. At this point, it was 15 minutes past our departure time, so I’m pretty sure we missed our actual bus and they just put us on the next one. Likewise, while our tickets had seat numbers, in reality everyone sat wherever they wanted.

The bus ride took about 45 minutes and stopped in front of the Teotihuacan archaeological site, where we asked about an ATM. Unfortunately it was in the park, and we didn’t have enough for admission (65 pesos/person). So we walked ~20 minutes to the town adjacent to the site, looking for an ATM. It looked like tourists were a rarity there, although everyone was quite friendly. After finding an ATM, we grabbed some tacos and went back to the archaeological site.

By now (~11:00 am), Teotihuacan was full of tourists, but it wasn’t any less spectacular. Our first stop was the Temple of the Feathered Serpent, a smaller but ornate ruin decorated with stone heads of a feathered serpent (possibly Quetzalcoatl) and a crocodile-like creature believed to be either the rain god Tlaloc or the deity Cipactli3. Beneath this, a recently discovered tunnel suggests that this temple was a site dedicated to the beginning of time4. 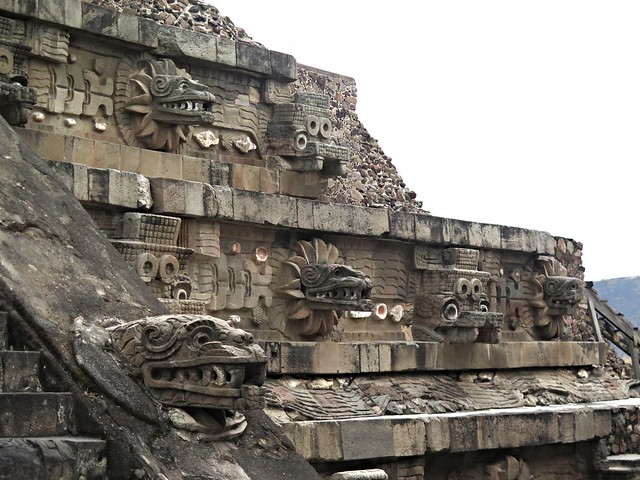 From here, we walked on to the Pyramid of the Moon, the second largest pyramid in the compound. Dedicated to worship of a goddess that gave life and fertility5. This pyramid was likely the site of annual ritual sacrifices, fulfilling a ritual where the blood of sacrifices fed the gods and produced the annual rains that in turn fed the people6. The top gives a great view of the whole Teotihuacan site: 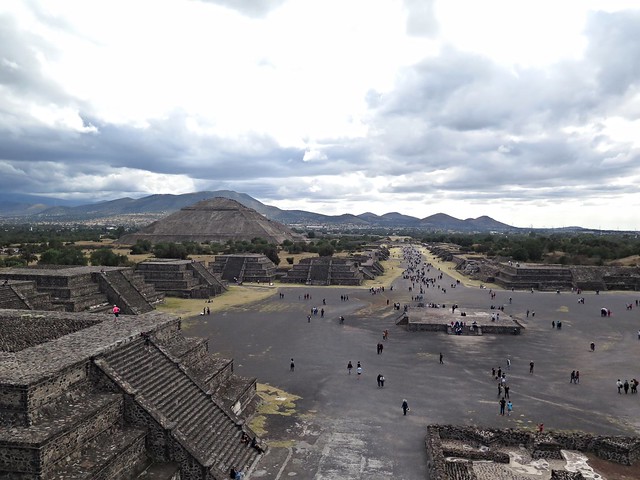 Our last stop was the Pyramid of the Sun, which despite its size as largest pyramid in the complex has little known history. At this point it was around 2 pm, the sun was getting hot, and the pyramid was swarming with people. Stoytcho and I decided we didn’t really need to climb the pyramid, so we took a couple of pictures and called this one a day: 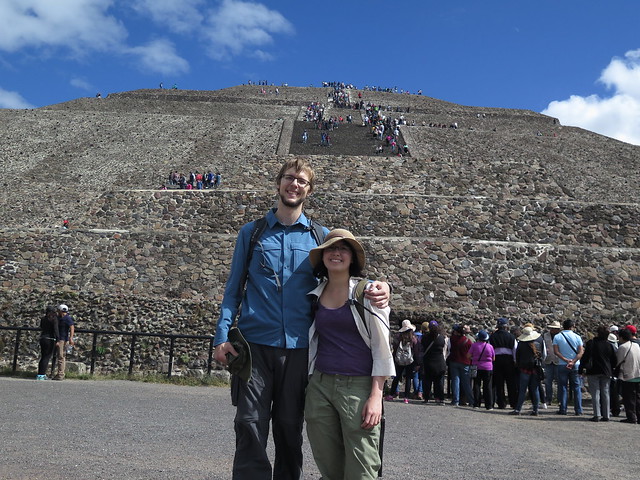 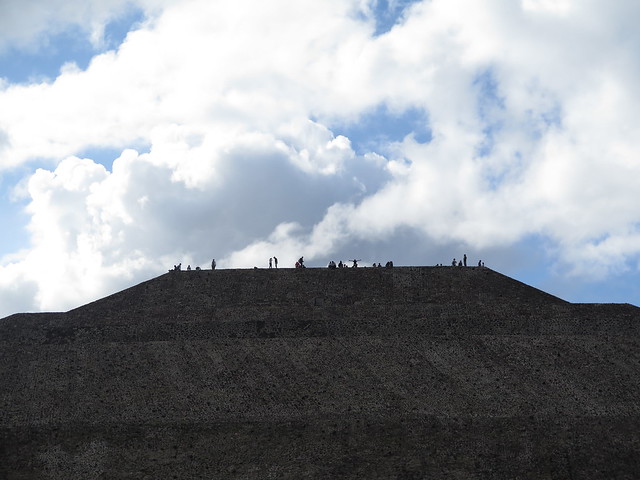 Afterward we were pretty hungry, and stopped in one of the many restaurants just outside the park to get food. A word of warning to everyone visiting, the food was awful and pretty expensive (~350 pesos), so you should instead take a taxi into town where you can get a great meal for less than 100 pesos. Overall though, this was an affordable day trip for people on a tight budget.

One of the great things about Mexico City is that many of the museums we visited had free admission, making them accessible to everyone. Museo Soumaya, one of Mexico City’s newest museums, is no exception. Unlike many of the museums around the city though, it’s not dedicated a specific theme. Instead, most of what’s on display here is the collection of Mexico’s richest man and CEO of Telmex, Carlos Slim. He funded construction of the massive museum building and provided his private collections for display, naming the museum after his late wife (Soumaya).

The works on display are diverse. While there are a total of six floors, we only explored the first two. The ground floor was dedicated to sculptures and murals, including a bronze cast of “The Gates of Hell”, a massive and incredibly detailed work by Auguste Rodin. Here’s one tiny part of it: 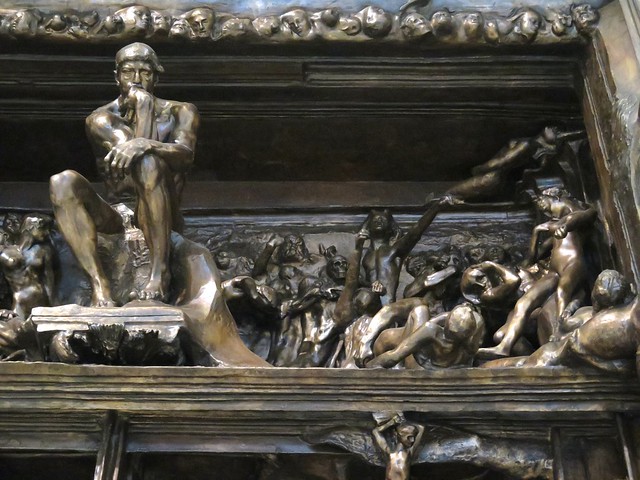 Here’s another of runners, racing toward the finish line: 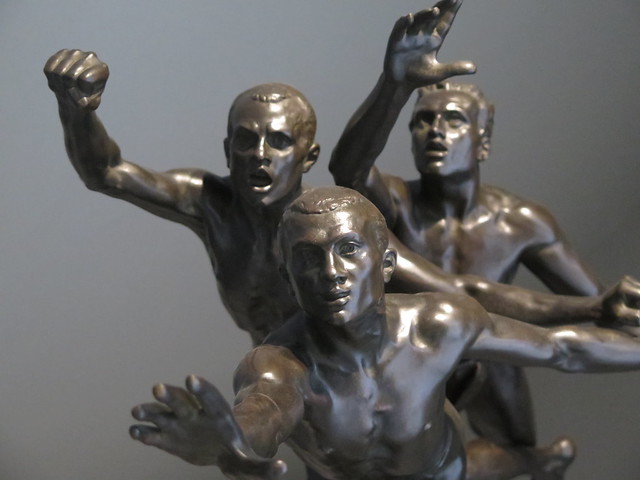 The first floor was dedicated to Mexican and Hispanic art and artifacts, including religious works and early coinage from the Mexican republic. One intersting highlight was an entire cabinet-full of hearts of Jesus and the Virgin Mary: 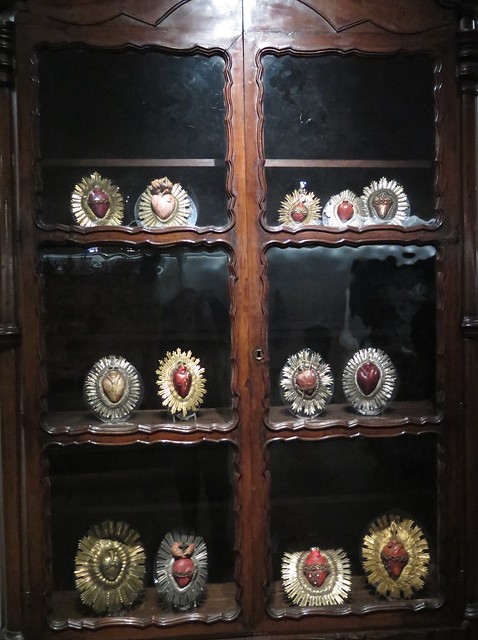 The second floor was dedicated to Asian ivory carvings, consisting of work from China, India, and Japan. There were pieces carved directly into tusks, like the one below: 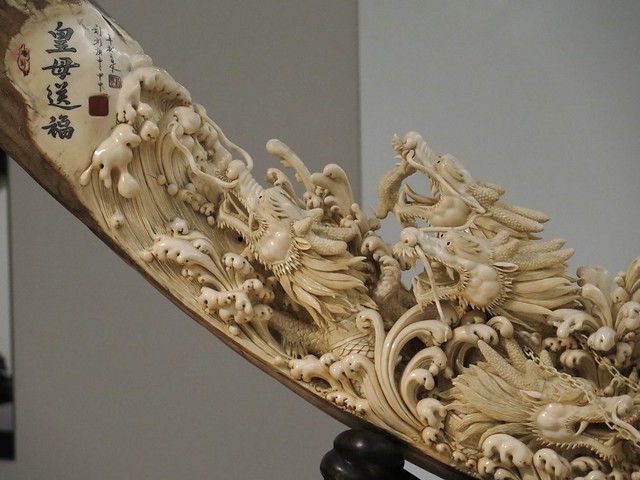 There were also smaller pieces, including this one of Guan Yin: 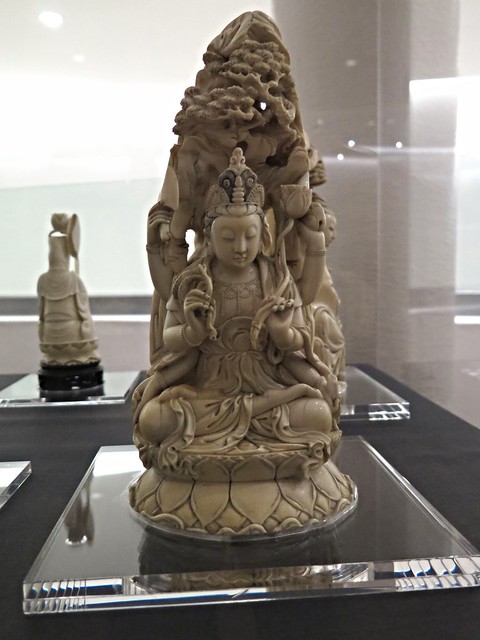 Overall, we thought Museo Soumaya was a fantastic way to spend a day looking at religious and cultural works. While researching the museum online I came across a lot of criticism for both the art collection and the project, one of which was that Slim spent millions on this museum while most Mexicans make a fraction of this. But art and culture aren’t the sole privilege of the developed world. Just like a free museum, like the Soumaya, it’s something for everyone to enjoy.