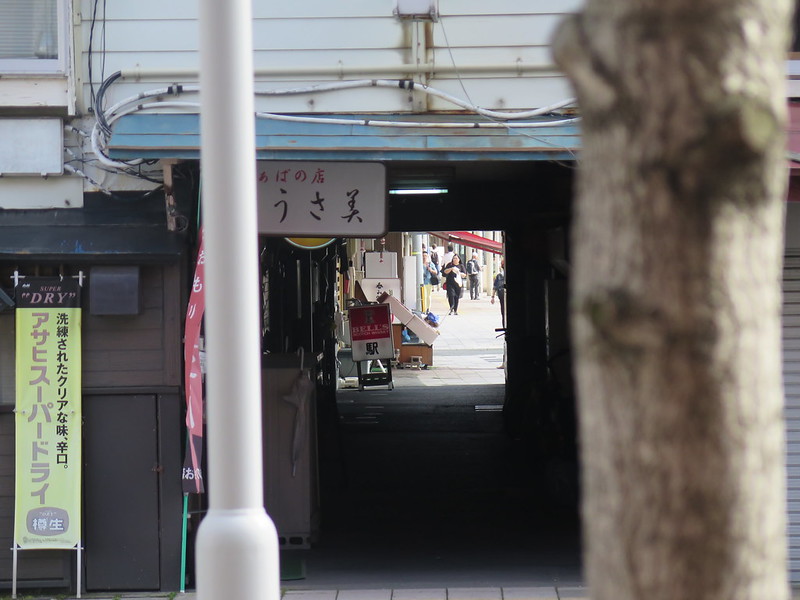 We visited Aomori at a quiet time in the year. It was still summer, but well past the cherry blossom season that sees a huge influx of visitors to the region. We came to the city with the goal of seeing the huge floats that are used in the Nebuta Festival every year. 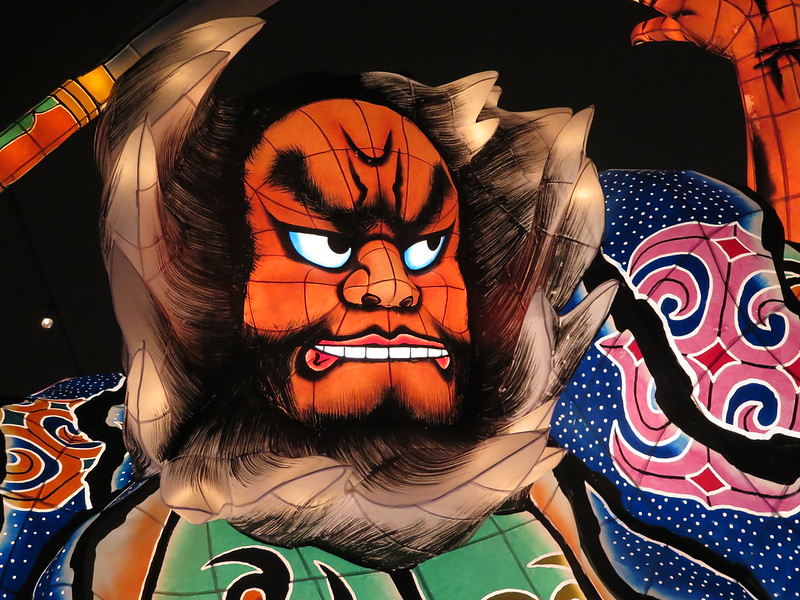 The festival takes place at the start of August and we were there way too early for that. Fortunately, there’s a museum open year round that showcases the floats themselves. It doesn’t have the same atmosphere as thousands of people chanting and dancing but the visuals were stunning. 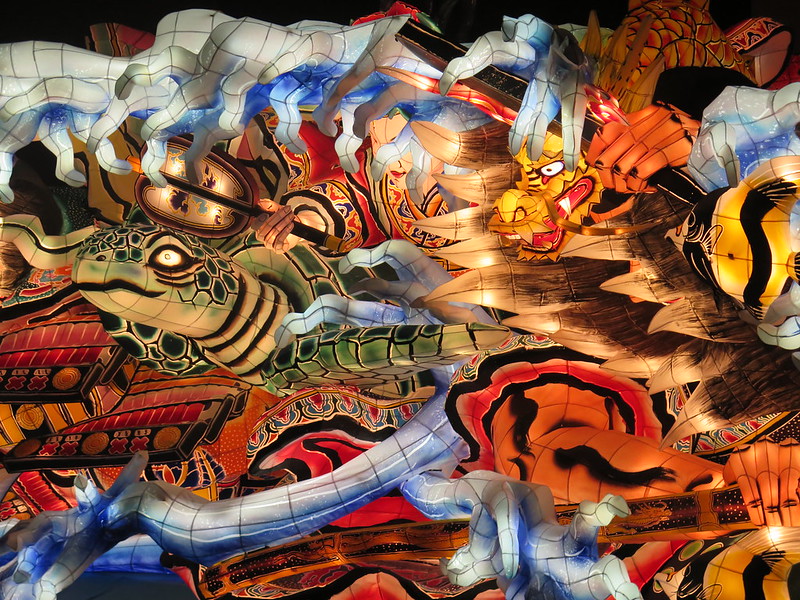 The tradition of Nebuta runs murkily into the past, where legend and hearsay mix, focused on military tactics and victories. If there is a factual origin story it’s likely long gone by now and all that remains are the floats themselves. The combat-related story is fairly clear in the statues : grimaced-faced men and gods with wild hair point fierce, decorated weaponry at beasts and demons and other foes. Fire erupts where they clash, the fingers of the sea rush in to take their toll, nature in its most violent forms is represented. 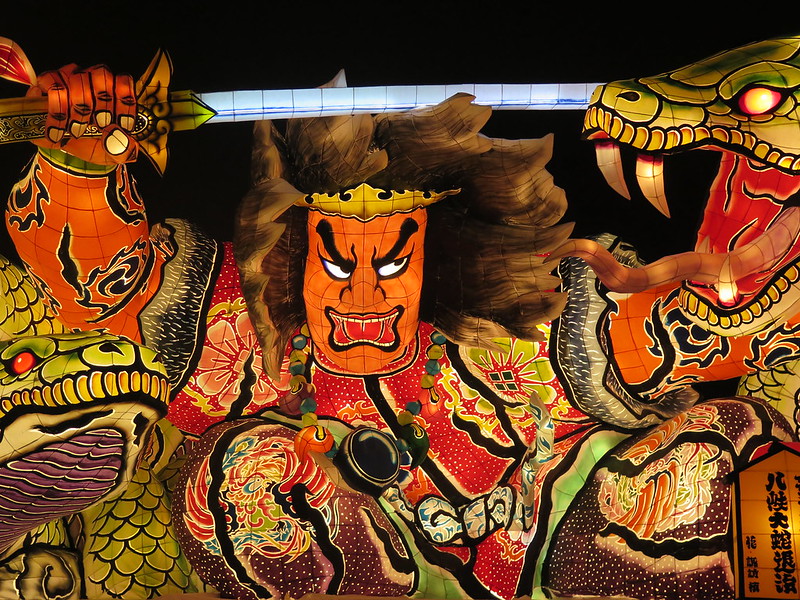 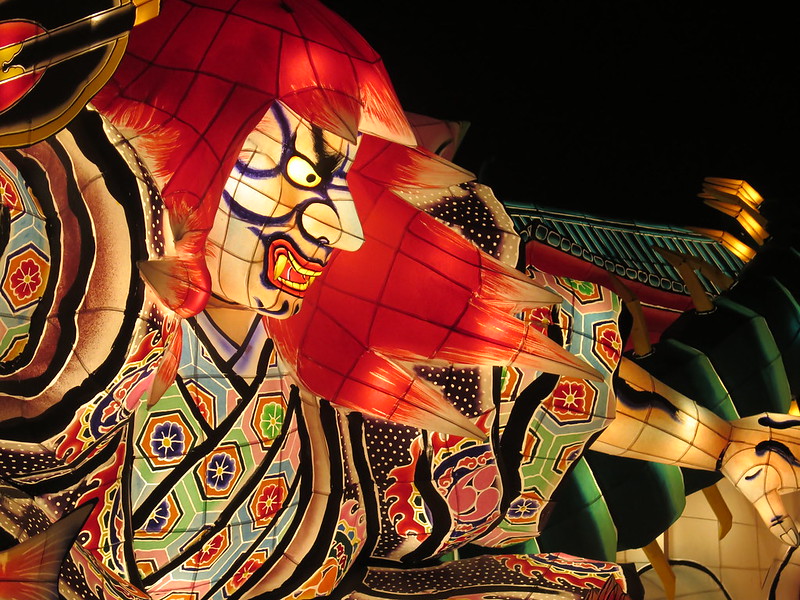 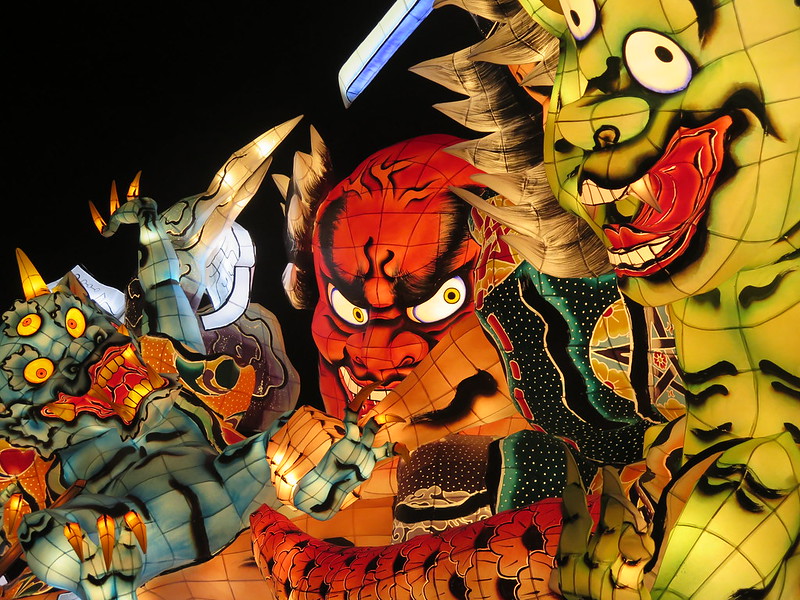 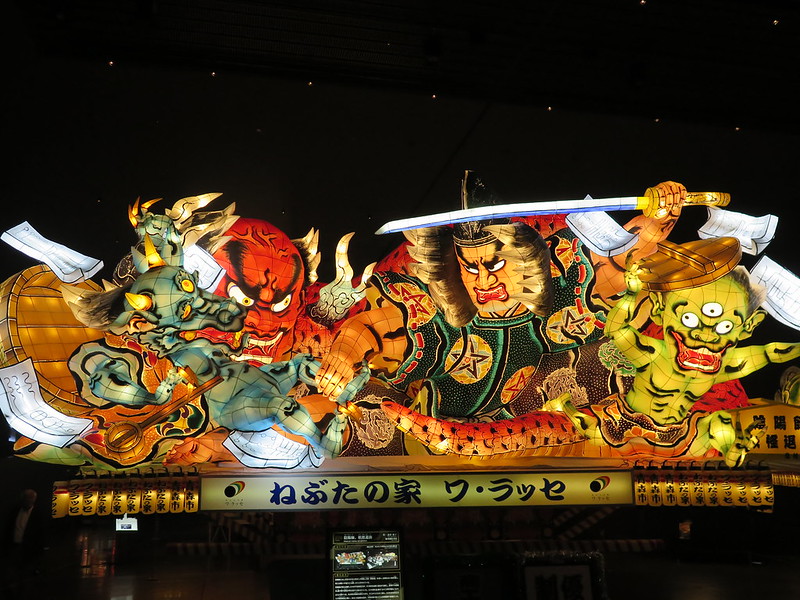 They’re giant, nine by eight meter platforms with a five meter statue mounted on top. Some of them weigh as much as four tons. This is incredible because, when you look at how the statues are constructed you realize exactly how many pieces of art there are in any of the large displays. 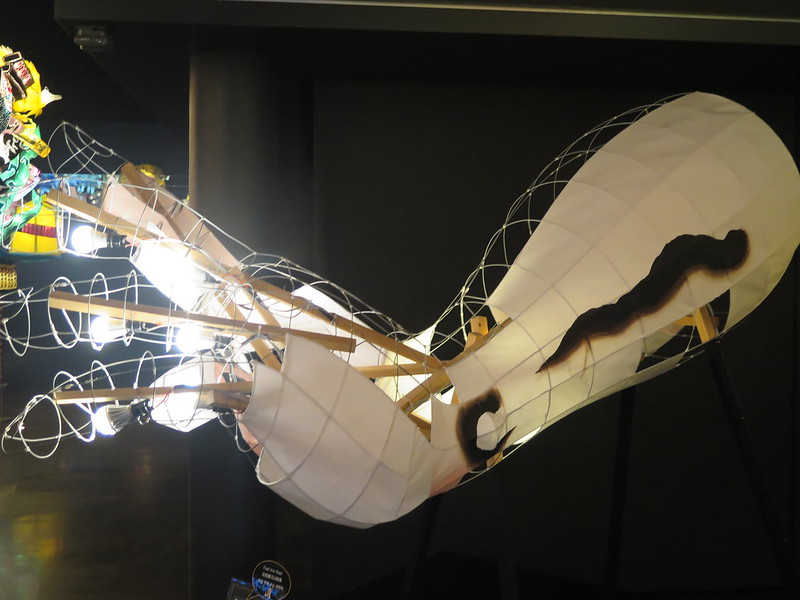 The lantern statues were traditionally made of bamboo frames with painted paper panels and actual burning lanterns illuminating the artwork. This was cause for the floats going up in flames at an alarming rate, so the introduction of wire frames and modern lightbulbs was a huge improvement. 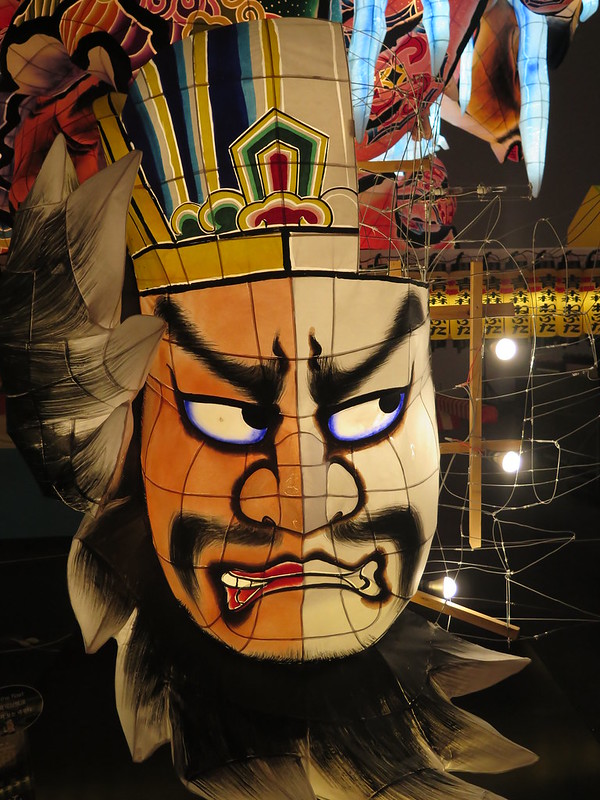 The wires are bent into shape and tied together, the paper panels are glued on and painted, and the internal lighting is hooked up. Making these floats is a task for many people, usually volunteers and amateur painters from the area. 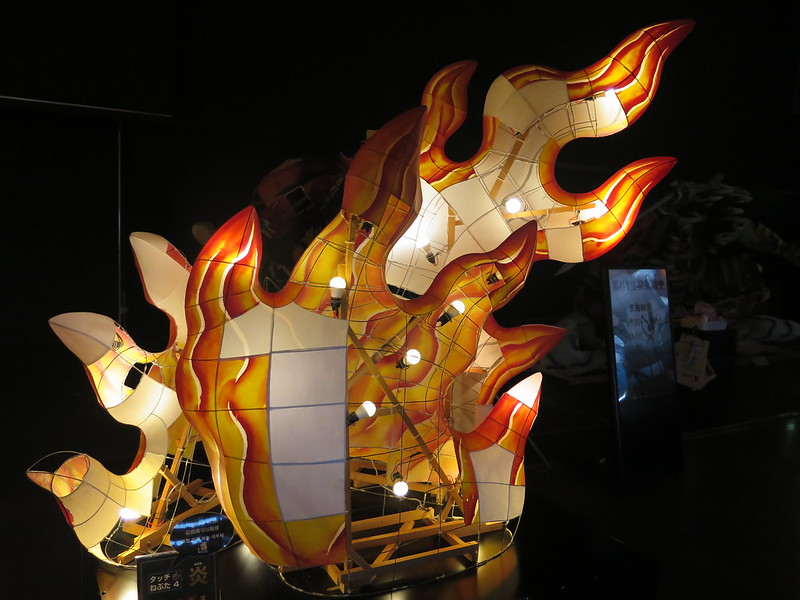 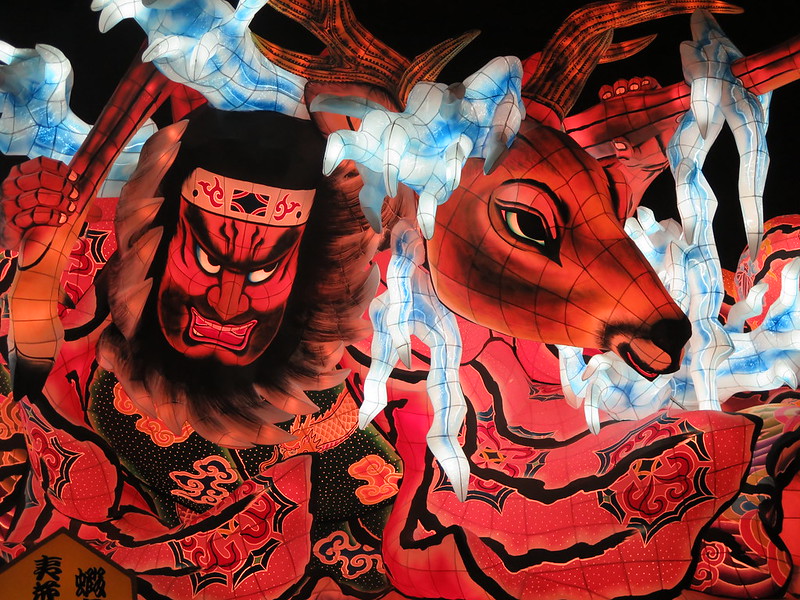 Along with the fury and elements present in many of the floats, there are minor, whimsical aspects that – if I knew more about the symbols involved – might add a layer of depth to the stunning display. 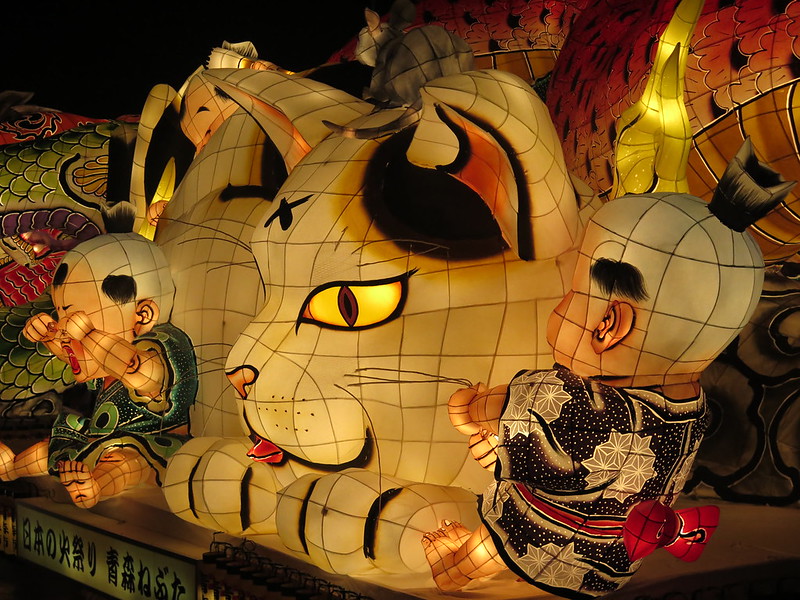 In recent times there seems to have been a movement towards master makers, professional float crafters who study and master this as a craft. It was heartening to see that there were several women represented in the group. Their photos and workshops were on display, along with an example of each artist’s work. The theme to this display was the face – fierce, expressive, and imposing. 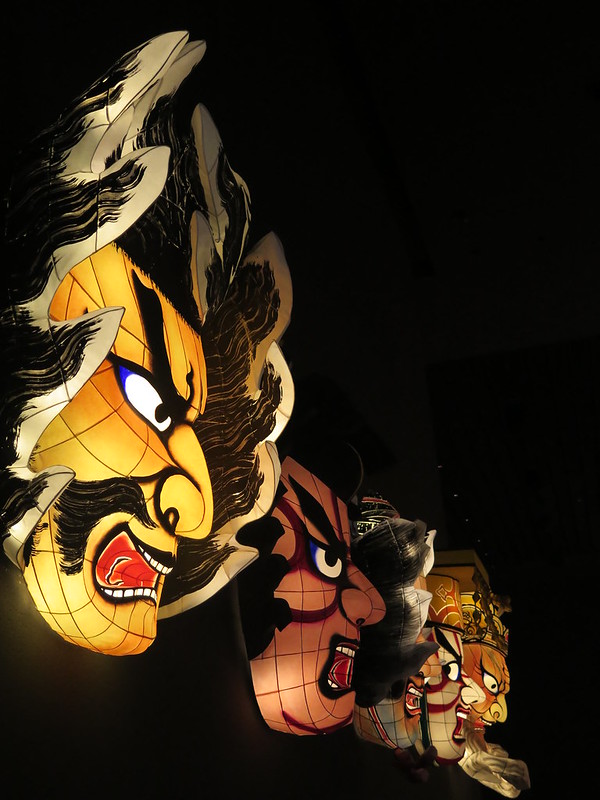 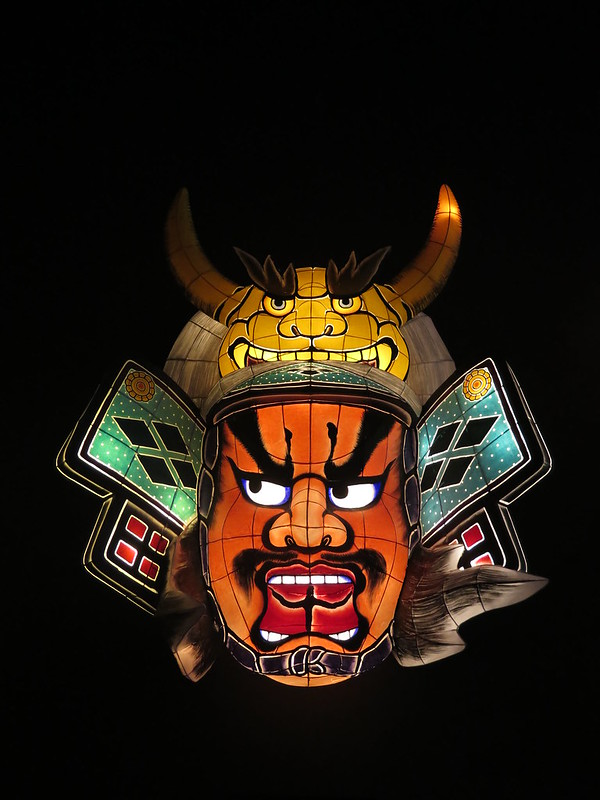 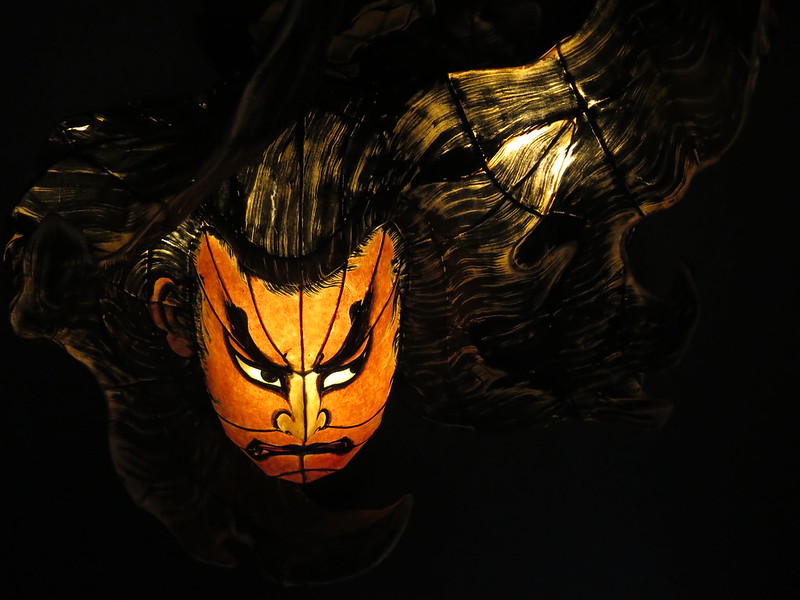 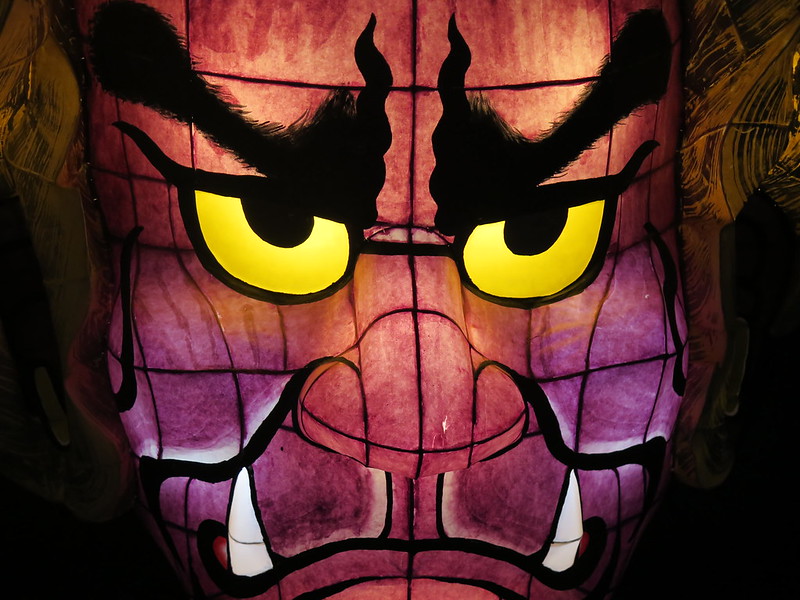