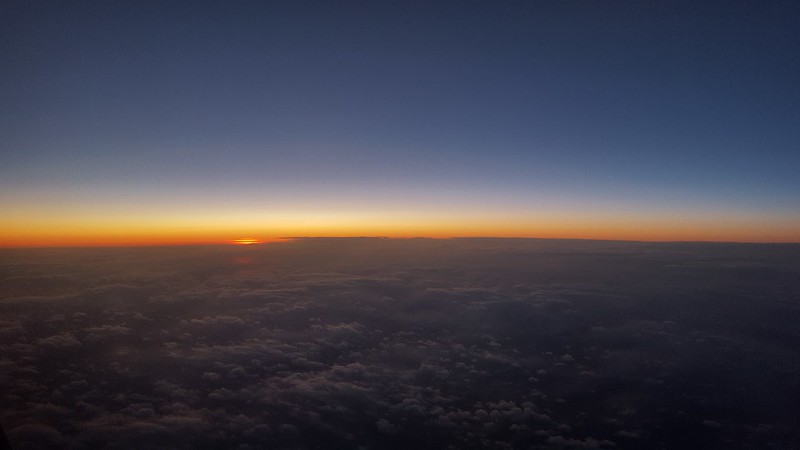 Today, after 375 days of travel across 5 continents, I’m headed back to the U.S. I pack the remaining things that Stoytcho didn’t take with him last week, then it’s off to the Berlin airport. Wow Air had the cheapest flight I could find, so I have a 4 hour layover in Reykjavik before flying on to Boston. 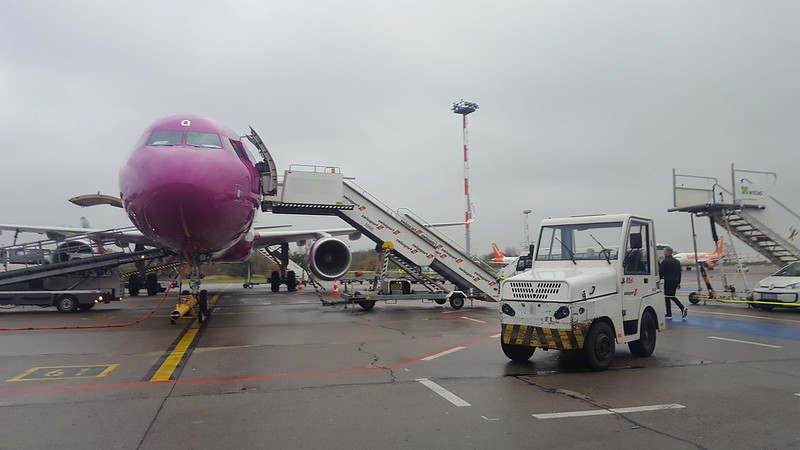 I board the first plane in Berlin and fly through overcast skies without incident, spending most of the time thinking about apartment hunting and what I’m coming back to. It has been a tumultuous year in the U.S., exhausting to watch from afar, but likely even more exhausting for those living in the States. I don’t exactly know what I’m coming back to, and though I have a job waiting for me, part of me does not wish to return. It’s easier to not go back to the problems. But running from the problems won’t solve anything, and even worse, it leaves behind those who can’t leave. 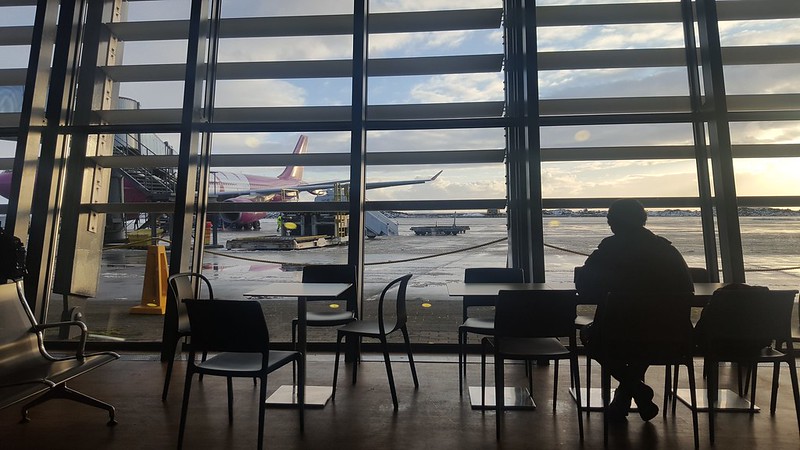 I land in Reykjavik just in time for the winter afternoon sunset and spend most of my layover working on blog posts, wandering through the duty free shop, and staring out at the snowy, golden landscape. I am grateful for the warmth of the airport as I board the next plane and experience a brief blast of icy air. 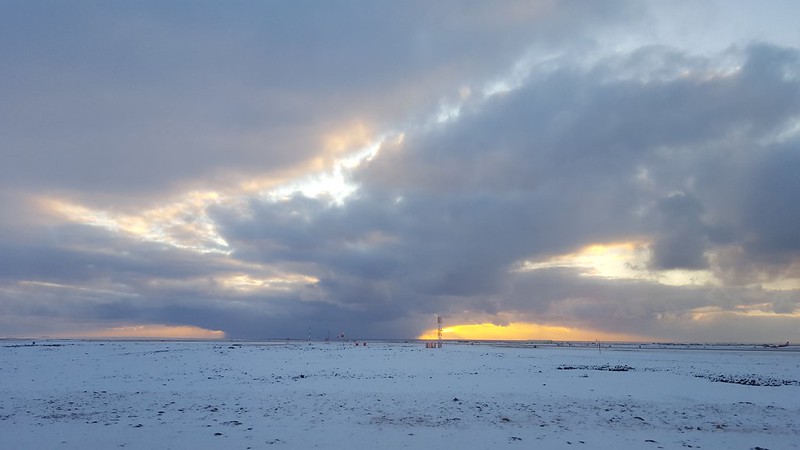 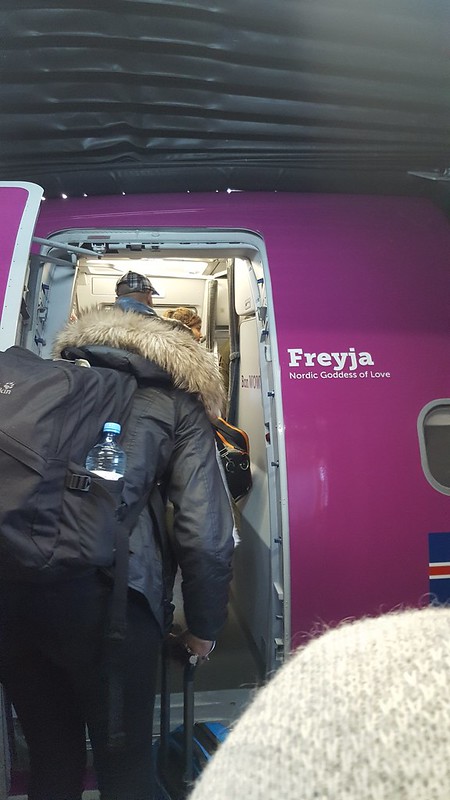 The dusk flight from Iceland to Boston is the most beautiful I’ve ever experienced. The jagged rocks of Iceland’s coast interlace with the dark sea and wisps of hanging mist. Above the clouds the sun dyes everything a golden orange with purple shadows. 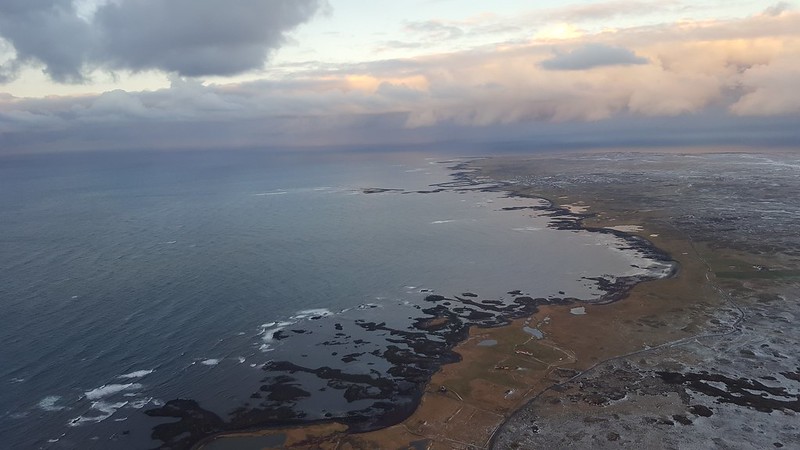 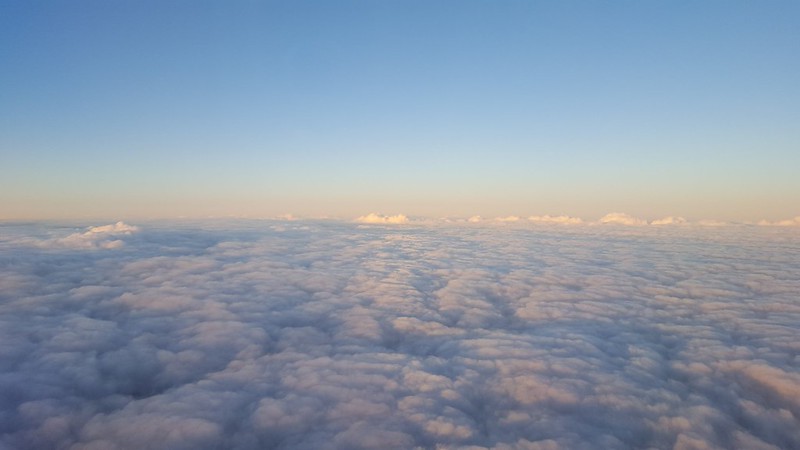 I drift in and out of sleep and wake to the captain making a PA announcement: we’re passing over Greenland. Below us, a mountainous landscape cloaked in purple and white stretches out endlessly. The winter extends the Greenland landmass with icebergs in the sea. 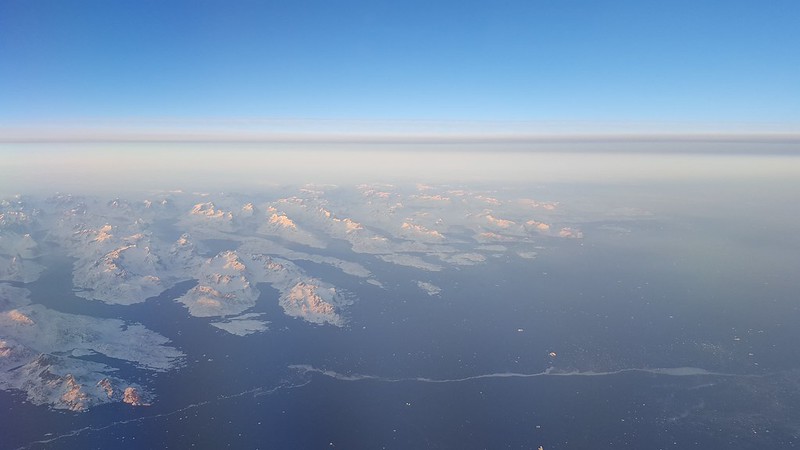 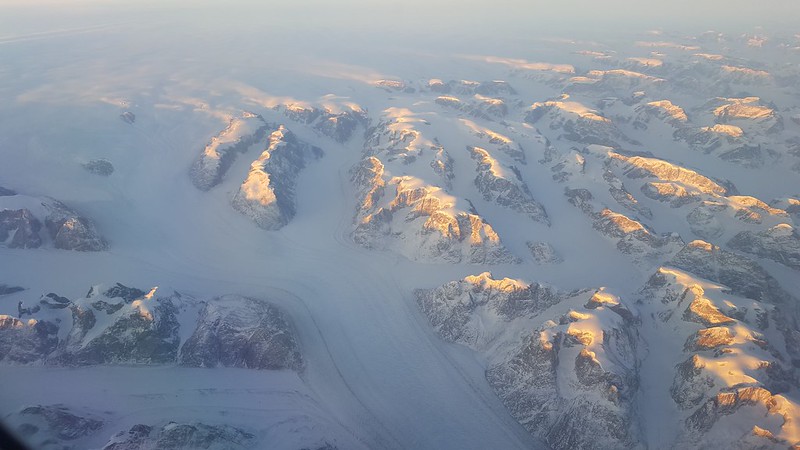 Though we are chasing the sun, it outruns us and eventually the plane slips into darkness. I sleep a bit more, and wake to a jolt and the announcement that we’re coming in for landing. Below and ahead, thousands of rainbow lights twinkle on the horizon: the Boston harbor at night. 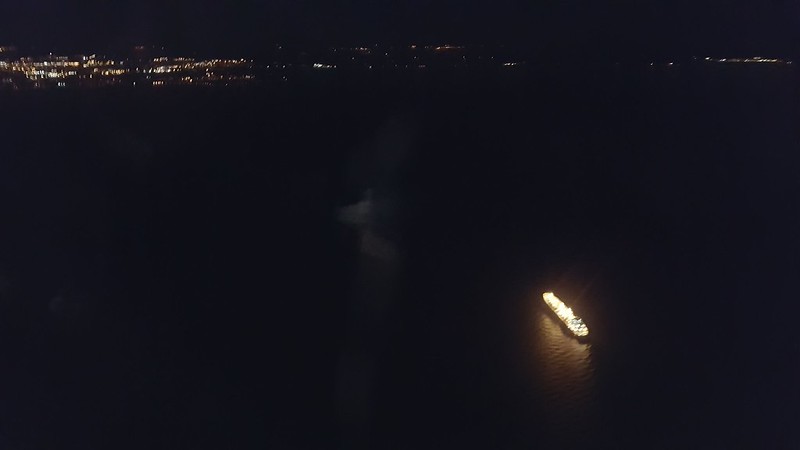 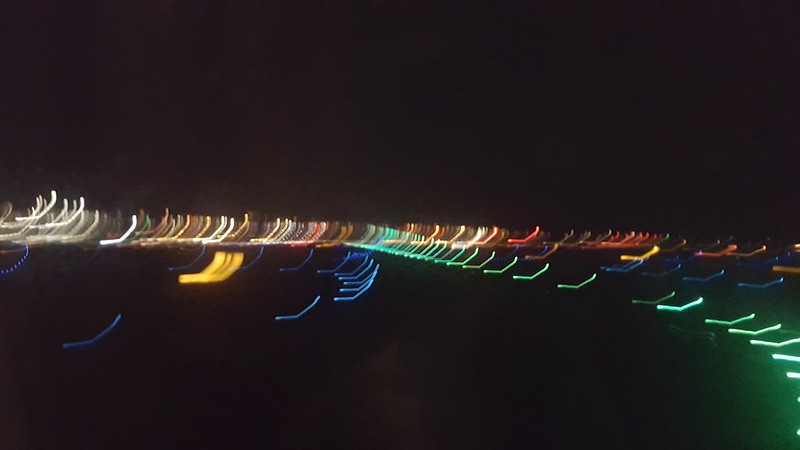 As we come in for landing the dots become brilliant streaks of light out the window, and then we’re at a standstill, back on U.S. soil with all of its fear and hope for the future. I spent the better part of a decade planning and saving for this trip. Now it’s time to move on. And while our round-the-world trip is over, the journey is not. It will continue, always, in every person we meet and inspire to take their own first steps away from the comfort of home. 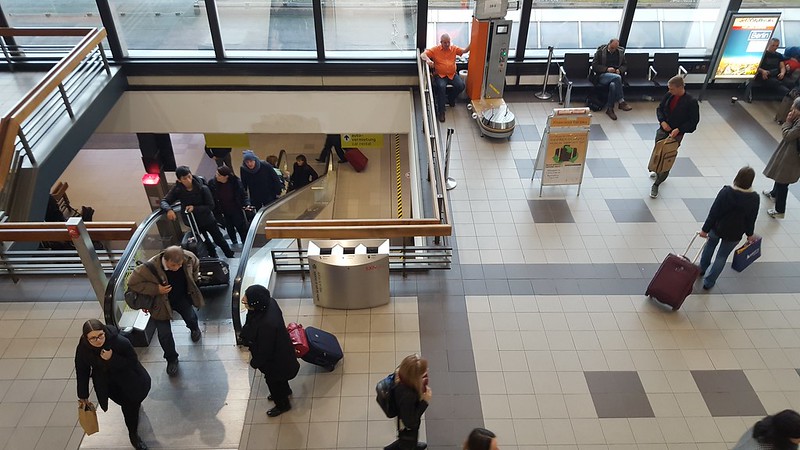 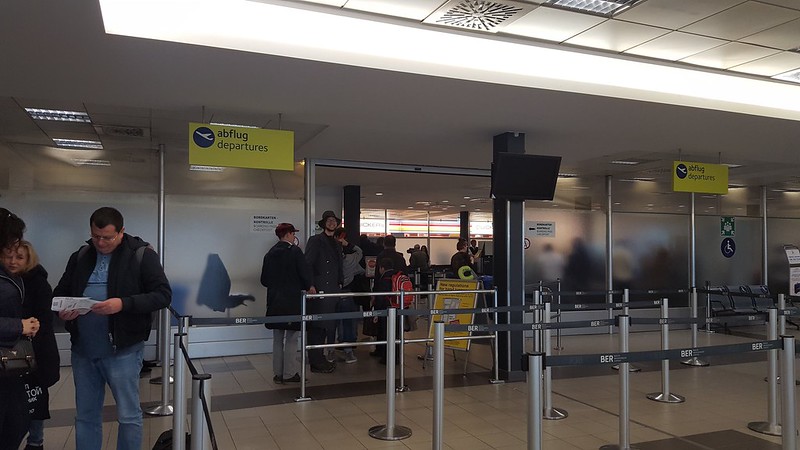 It’s time for us to say goodbye to the American continent and move on to New Zealand! While there are plenty of flights to Auckland from the U.S., there are fewer from South America and they’re far more expensive. When we booked our tickets from Santiago to Auckland, they cost a jaw-dropping $1,500 per person. Our only consolation was we paid for most of it with credit card points, leaving only $1,000 for us to pay in cash.

Our flight isn’t straightforward, either. We must first fly from Santiago to the Buenos Aires airport of Aeroparque Jorge Newbery (AEP) via Aerolineas Argentinas. We then have four hours to collect our baggage, take the bus across the city to Ministro Pistarini International Airport (EZE), and check in with Air New Zealand. Thirteen hours and a hop over the international dateline later, we should be in New Zealand.

The bus to Santiago’s airport is a breeze, and we arrive at the airport ready for our day of plane scramble. When we check in with Aerolinas Argentinas we get a free upgrade to seats with more legroom. That’s awesome for me, but for Stoytcho it’s a near-necessity; his 6’4” self doesn’t fit well into most airline seats, and we’ve had more than one passenger in front of him become angry when they realize they can’t recline an inch.

Despite having only a couple of hours on this flight, we get a snack of ham-and-cheese sandwiches and an alfajor for free. This is somehow even better than flying JetBlue, and I find myself wishing that flights in the U.S. were as nice as this.

Two hours after takeoff, we’re down on the tarmac in Buenos Aires for our shortest visit to a country yet: we have a mere four hours in Argentina and with traffic still dodgy from rush hour, we have zero time to explore. We head downstairs to look for transit to EZE and I notice a sign proclaiming 50% off of the TiendaLeon airport transfer bus for Aerolinas Argentinas passengers. We ask the TiendaLeon attendant if that applies to us, and she nods. SCORE! It saves us $10, or a meal for the two of us.

We pile on to the bus with our huge backpacks and settle in for the hourlong ride across Buenos Aires, the city we’ll only see through a bus window. It’s already night, but as we roll along we can make out huge cranes resting on the waterfront, parts of new construction zones, and new highrises. We pass several modern gastropubs and a brewery. As we veer away from the waterfront, we pass older buildings, more decrepit with peeling paint for skin and wildly askew antennae for hair. Like everywhere we’ve seen, there’s a distinct upper and lower class here.

Though we arrive at EZE with more than two hours to spare, we experience a brief moment of panic when we encounter the chaos of the airport. There’s a huge hangup in immigration to exit the country, with lines stretching for hundreds of feet. We’re worried at first that we won’t make our flight, but after thirty minutes of shuffling along in line we approach the front and get the Argentinian exit stamp in our passports. In and out the same day, in less than four hours. Argentina, we’ll have to come back for you.

Now we face the long leg of our trip: the 13-hour flight to New Zealand. It’s bad enough that it’s the last part of our trip (somehow, a long stretch followed by short hops always feels better to me). But to make matters worse, the check-in attendant wouldn’t give us seats with extra legroom, citing company rules. She said our options were to either purchase a seat upgrade, or we could opt in to a new program that let us “buy” an empty seat next to us at a discount for our exclusive use. Both cost some absurd amount in the hundreds of dollars that we didn’t have, so we were stuck cramming Stoytcho into a standard airline seat.

There’s not much to say about a flight across the Pacific except that it’s long and unpleasant. As an overnighter, the cabin crew served us a meal and rushed to dim the lights and get us to sleep. We both slept a few hours, waking up with our necks twisted at odd angles or drooling onto the tray table. The woman in front of Stoytcho was not pleased about being unable to recline, and he acquired a couple of knee-bruises in her attempts. To add insult to injury, the entire emergency exit row a couple seats in front of us sat empty the entire flight. No one had ponied up the extra money for them, and we sat staring at the empty seats and resenting Air New Zealand. I know that “add ons” are the standard model for Western airlines and they argue that it makes economic sense, but after how much we already paid it just feels so bad.

Thirteen hours, some interrupted sleep, and several episodes of Planet Earth later, our plane lands and we stumble off into the New Zealand sunlight at a chipper 7:00 am. We’ve survived the discomforts and knee-assaults and we’ve made it to a new continent!