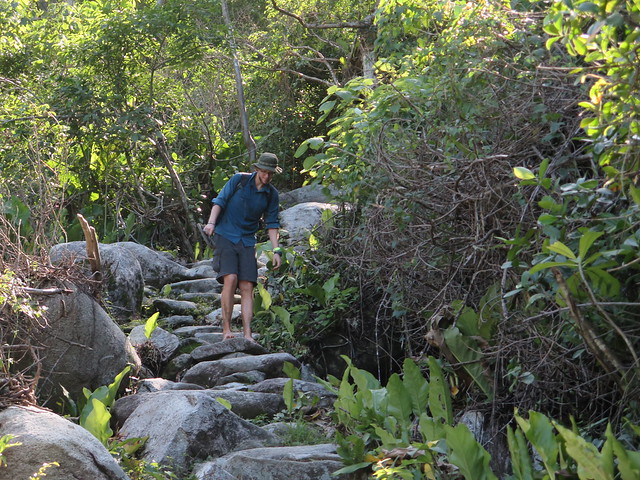 This trail is one of the only two trails available to visitors in the park and takes you to a village via an ancient trail built by the indigenous people. It’s awesome for two reasons: first, it takes you deep into the jungle where you can spot a wide variety of native animals and plants. And second, because the indigenous people paved the original trail with granite–you can do most of the hike barefoot! This is perfect for the rainy season in Tayrona, when ankle-deep mud forms on the trails and it’s easy to lose or destroy your shoes. So if you’re in the park for what’s traditionally considered the “off season”, this is a great way to experience the amazing nature of Tayrona.

I’ve traced out the route from the Arrecifes campsite (the first campsite you encounter in the park). There are essentially two sections, each taking around 1-1.5 hours depending on how fast you move. The first section of the trail is along the coast. Then at Cabo San Juan, you turn inland for the next half of the trail. Note that this rendering of the trail is estimated—we don’t have GPS coordinates.

Here are a few things for you to keep in mind if you hike this trail:

The hike in parts:

Part I: The hike from Arrecifes to Cabo San Juan

We woke up at 6 am to start this hike, and caught the sun peeking through the clouds along Arrecifes.

Though the weather looked good for the day, previous rain guaranteed that this first part of the trail was thick with mud. At some places it came up to almost our knees. We pulled off our shoes and slogged through it, avoiding the mules and horses as they came through with their drivers.

When we reached Cabo San Juan, we took a break for a bit and snacked. We then took the trail inland from the northwestern corner of the campsite. This part was filled with tons of wildlife. Being me, I mostly took pictures of the insects and spiders:

The trail is also tons of fun to hike because it was paved with granite stones by the indigenous people, creating a path mostly free of mud and vegetation. We did most of this part barefoot, taking care not to step on the leafcutter ants that bite vigorously if disturbed.

After about 1.5 hours on this path, we arrived at Pueblito. The village was nearly empty, with the exception of a few indigenous people and hikers. We were allowed to walk around and take pictures:

Out of respect, we didn’t take any pictures of the indigenous people. They seemed fairly withdrawn and didn’t want to interact, and I can’t blame them. After all, we’re tramping around on their land.

It looks like there were once attempts to modernize the village, either building a dwelling for them or facilities for visitors, but they’ve been abandoned. Now the jungle is reclaiming these crumbling structures:

We stuck around the village for an hour, then had another snack (bread and Nutella and peanut butter) before heading back. On the way out, we spotted some familiar flora. It looks the ground cherry grows wild here:

It took us another hour or so to get back to the beach, where we enjoyed a cool dip in the ocean before heading back to the campsite.

Parque Tayrona is arguably Colombia’s most famous national park. It’s a huge swath of beachfront jungle in the northeastern corner of the country, and boasts tropical rain forest, cloud forest, dry forest, reefs, and seagrass ecosystems all in one neat little area. In addition, it’s home to several indigenous Colombian tribes (the Arhuaco, Kancuamo, Kogi, and Wiwa), pre-Hispanic dwellings, and sacred sites. Combine this with the park’s remoteness (it’s a 2 hour bus ride away from the nearest city – Santa Marta), and it’s no wonder this park is a dream destination for so many travelers.

But all that tourist attraction breeds a host of problems, from maintaining the park’s natural ecosystems to respecting the indigenous people that live there. While there are a list of rules and instructions given to every person that enters the park (see explanation below), there aren’t nearly enough park rangers and things like the plastic bag ban are rarely enforced. Tourists are also sometimes a bit too excited to see the indigenous peoples, leading to a lot of pictures without permission. We watched one guy take a picture over the fence of a woman bathing her children. In any other place, this guy would get the cops called on him. Things like this culminated in the infamous park closure in 2015, where the indigenous people called for the closure of the park to cleanse it of trash and “bad energies”. And as of writing this blog, there’s been enough trouble in less than two years that they’ve closed the park again starting January 28, 2017..

That isn’t to say don’t visit. But if you do, have a healthy dose of respect for both the nature and people of the park.

Getting There from Santa Marta on a budget

The cheapest way to get to Tayrona Park from Santa Marta is the public bus, which costs 7000 pesos and takes around 2 hours. Pick it up in the market area of Santa Marta–ask the locals in the area for “Parque Tayrona” and they’re usually happy to help.

There are two ways you can do the park: a day hike on the west side, or hiking into a campsite on the east side and staying several days. I’ve heard it’s also possible to take boats between the two points, but we didn’t hike the west side, so all of the instructions below are for hiking into a campsite on the east side of the park. If you’re camping in the park, don’t expect to find much in the way of camp supplies in Santa Marta. We couldn’t find fuel for our stove, so we bought cold food from the local grocery store Éxito.

When you arrive at the park, you’ll enter an area where you’ll hear the Spanish-only introduction and rules from the guide. The basics are the standard park rules:

Two special ones particularly worth highlighting are:

This is also where you can book a campsite at Arrecifes in advance—no others can be booked until you arrive onsite. Once you’ve listened to the introduction, you get a small ticket. Bring this with you to the entrance kiosk to the park, pay the entry fee (41,000 COP or around $14 USD), and you’ll be allowed in. From there, spend the 3000 pesos ($1 USD) to take the bus for an hour to the trailhead. From here you’ll hike for at least 1.5 hours in the rainy season – going is slow because of the mud. There’s a shorter horse trail you could also take, but it’s more treacherous and you’ll have to watch out for horses passing you.

As a side note here: there are reports on Wikitravel of guards checking your bags and potentially stealing from you. There weren’t even guards who checked our bags when we came through. A bigger threat is theft at campsites; we lost a towel, and there were other reports while we were there of missing items. Some campsites have lockers to prevent this.

During our stay, we found four campsites in the park: two run by the park staff (Arresifes and Cabo San Juan), and two run privately. We’ve marked the four campsites to the best of our knowledge on the map below:

All four have spaces for tents and hammocks for rent. The park-run sites are Arrecifes, the first campsite you encounter after the 1.5 hour hike in, and Cabo San Juan, the campsite at the end of the trail, about 2.5 hours hike in. The two private campsites are in between: the first is just south of Arrecifes, and although its name escapes me it’s slightly cheaper than Arrecifes. Bukaru is further along—cross the river at the north end of Arresifes beach and then travel upriver.

To save money, we brought food with us and ate out in the park only once a day. All of the food we brought with us could be prepared without a stove, because while we had a stove, we were unable to find a fuel canisters for it in either Cartagena or Santa Marta (we were able to find a fuel canister, but it was the European style, if that helps you prepare). Cold meals consisted of bread, peanut butter, and Nutella to make sandwiches, mixed nuts and candy as snacks, and some apples for fruit. We also carried mini-croissants from the grocery bakery as an impulse-buy which turned out to be extremely helpful, as they could be dipped into the peanut butter and Nutella directly, while our sandwich bread fell apart unless we applied these gently with knives. Because we had a water purifier, we didn’t worry too much about carrying in drinking water, so we simply filled 2 of our 1L bottles and purchased a large 5L bottle. The total cost of all food and water at our local Exito was 53,000 pesos, or about $18 USD. It’s hard to spend long days hiking or swimming without a hot meal, though, so we also budgeted for one meal a day. These meals are 2-3 times more expensive than those you find in Santa Marta, running 12,000-30,000 pesos a person ($4-10) at a meal shack and even higher at the nice restaurant in Arrecifes campsite. We learned a few things eating out:

Tayrona is famous for both ocean and land recreation, but in the rainy off season ocean activities like diving and snorkeling wane due to poor ocean visibility. Swimming is still lovely on the beaches it’s allowed (La Piscinita, La Piscina, Cabo San Juan). We found La Piscinita to be the most fun, as it has a steep 2 ft drop that causes waves to break directly on the shore. The beach to the west of this, La Piscina had decent visibility and seagrass, making it one of the few places you could snorkel and see fish in the rainy seasons.

Hiking is the other great thing to do, although there are only two major trails in the park and both originate at Cabo San Lucas, a one-hour hike in from Arrecifes. The inland trail here is 2.5 km and leads to Pueblito, a small traditional village where a handful of indigenous people still live. We’ll have a post on this later. The beach trail leads to more beaches and supposedly a dock. Here you can supposedly take a boat to the other side of the park and hike out to a bus stop on the western trail, which has distinctly different dry tropical forest. In most locations there are separate human and horse trail. Some of the horse trails are shorter and faster, but horses have right-of-way on these trails and they’re covered with horse feces, so take them at your own discretion.

The conditions for hiking in the rainy season can get rough if you’re not prepared—expect a lot of mud and plan to do parts of it barefoot or in water shoes like crocs. If you’re not in easily washable shoes, save yourself trouble and just take them off. In some parts of the trail to Cabo San Juan the mud can be mid-calf deep, and watch where you place your feet on the trail as there can be holes greater than knee deep between the roots. I had the unfortunate distinction of plunging a leg into one of these holes and got drenched with mud:

To get out of the park, you can either take a boat to the western side of the park and hike out, or hike out the way you came in. Buses stop hourly at both places until around 5:00 pm or when darkness falls. Cram yourself into one of them and ride back to Santa Marta.