One of the best things about traveling is going to new places, seeing new things, eating new food, and meeting new people. Newness at its purest form – a landscape and culture a bit, a lot, or completely different from home. This is exciting and your synapses are firing at full speed, making memories and slowing time down as every new thing comes along. Enjoying it takes some doing though. It certainly wasn’t as amazing as advertised on travel blogs, and I went through a deal of personal change before really getting the most out of it.

It comes down to two factors. The first is simple and in my mind required : getting used to the consequences of traveling. On the road, where the language is hard to understand and the maps are unfamiliar, there’s an extra level of perceived danger or discomfort with every negative event. Is the sky pouring buckets? It’s worse now because all of your worldly belongings, including the clothes you have to sleep in on the bus tonight, are going to get soaked. Has the last bus home already left? It’s scarier (or so it feels) because there’s no taxi to take you home, your friend can’t come by to pick you up, and there’s no bus schedule anywhere. (Side-note : there usually is a taxi but it’s often very expensive, hard to contact, and harder to communicate with.)

I think many people have experience dealing with this added layer of uncertainty and anxiety. I certainly did not, and it took a long while on the road to learn to relax. Eventually I had to relax, for my own sake and for Natalie’s, but it took effort and experience. Missing the bus a few times taught me that it’s ok – there will be another way onward tomorrow, or we can always sleep where we are. Getting soaked (a particular peeve of mine) got much less frustrating the third time around. Practicing being positive and reacting less negatively changed my outlook on uncertainty and mishap entirely.

The second factor I think is more nuanced. It’s an appreciation of novelty. Where getting accustomed to discomfort brings the experience up from miserable to normal, learning to appreciate the new around you opens up the whole enjoyment of traveling. It took some time to embrace the experience of going somewhere far and unknown and hard to get to, just like learning to enjoy bitter beer or coffee.

People are in general hard-wired to seek out novelty. Unfortunately, with modern life’s focus on routine and (often) drudgery, it’s easy to lose the taste for new experiences. Luckily, it does come back. And once it does, it becomes addicting in the best way possible. Arriving in a new city becomes less scary and more an opportunity to seek out things you haven’t seen before. Far flung adventures loom less and invoke more excited anticipation. Everything about travel comes with less resistance, because now you’re calm enough to focus on the good things. It took me personally well into Russia to fully open up, but every step along the way was easier and more rewarding than the last. 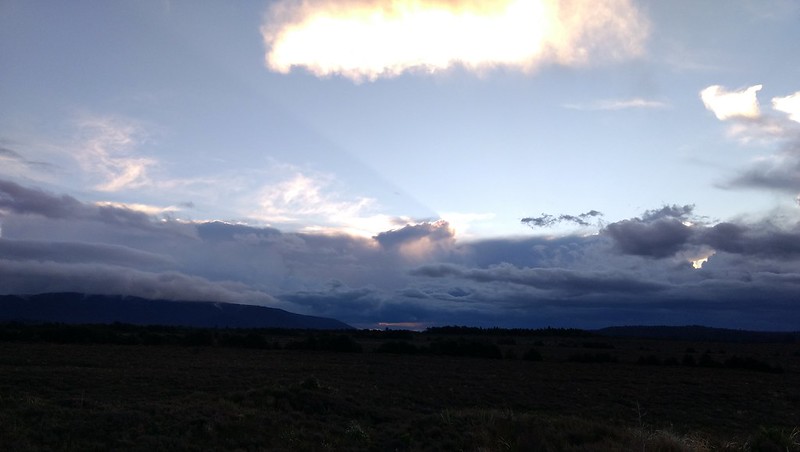 We finished our waterfall adventures and headed for one last tiny hike for the day. It’s called “Mounds Walk” and is listed as one of the short hikes near Whakapapa village, the center point of Tongariro. The New Zealand government helpfully supplies fantastic information on their parks website, well worth looking at for planning.

The whole 20 minute there-and-back culminates in a small raised platform surrounded in the distance by sets of mounds, exactly as described. The mounds are small hills, rising and settling with gentle slopes turning the landscape into a bubbling greenscape. The walk has informative graphics as to the theorized origins of the mounds – debris from previous volcanic explosions. 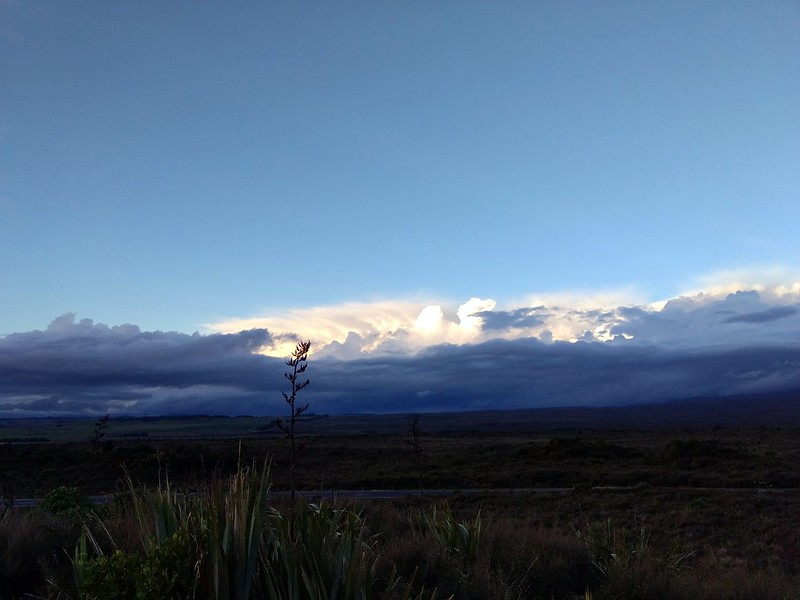 We visited too late in the day to get any really good shots of the mounds themselves, but the clouds filled in. As with many other places in New Zealand, the cloudscapes are vibrant, ever shifting, larger than life canvases in motion on which the sun paints with vivid palettes of reds and golds and violets. 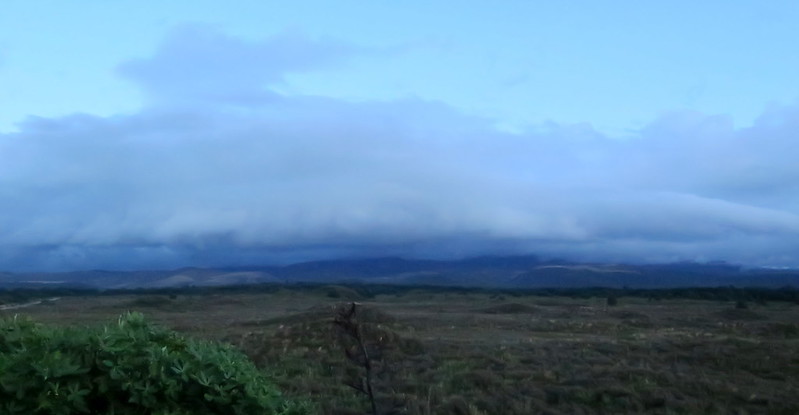 We got our exercise for the day running back to the car and motored off to our last destination for the day : glowworms were said to live in the walls formed by a road cut far-ish off into the countryside. What should have been an adventurous jaunt was threaded with anxiety and paranoia that night. Earlier in the day we’d met a very friendly Dutchman while we were drying out our camp gear. He’d been travelling around in a campervan for some months and chatted with us briefly. Before the rains came and we hurriedly stashed our gear, he brought us two cups of tea which we drank gratefully. Waterfalls and mounds followed, and my mind embarrassingly brooded on the incident. Despite months of meeting people and relying on their kindness and good will, the manual of safe travel popped up : be careful what you accept from whom, especially if you’re alone. Lack of sleep combined with darkening skies and childhood stories of backwoods terrors and coalesced into the though of : what if the tea was drugged. Natalie was in a similarly tired state and could only counter that it was highly unlikely, but now the errant thought nagged at her too.

What followed was a weary drive and a long conversation on travel, people, kindness and ill will. The short of it was that we were being very silly, and that by and large people everywhere want mostly the same things – a stable life, a chance to grow and raise their family. Of the places most people are likely to travel to, at worst people might be mildly annoyed at the large backpack and “tourists” ruining the area. We’ve found though that people we’ve met have been largely welcoming and curious. About why we’re in their part of the world, about what we think of it, about the rest of the world is like. We’ve been very lucky to not yet run into someone who wished us direct harm, though even then the goal is usually monetary gain rather than simple violence. This is not to say that the world is safe in all respects and that everything is peaches and cream, that would be too black-and-white for reality. But when it comes to people meeting people, at least in the places we’ve been to, the interactions are statistically for the better.

We’d arrived at this point, more tired and anxious than anything. The dirt road was pitch black excepting the streetlight at the junction to the main road. Here there is no place to turn around, so forward is the only direction. The dirt sides of the cut-through hill rise up rapidly and surround the car, everything is quiet except for the rumbling of the motor and visibility is truly limited to the beams of the headlights. It’s the kind of place where horror stories live, and boy were we primed for it. 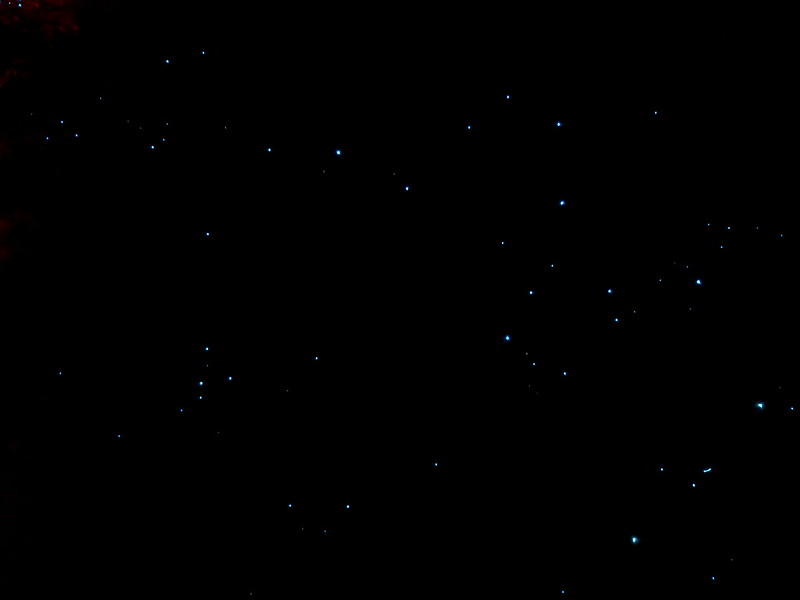 Unfortunately, to see the glowworms, we had to kill the lights and let our eyes adjust to the total black. An unpleasant concept, but we did it. The result was this scene – blue-green lights twinkling on an unseen plane a foot from our eyes. We didn’t take the brave step of getting out of the car, and in retrospect that was a mistake. 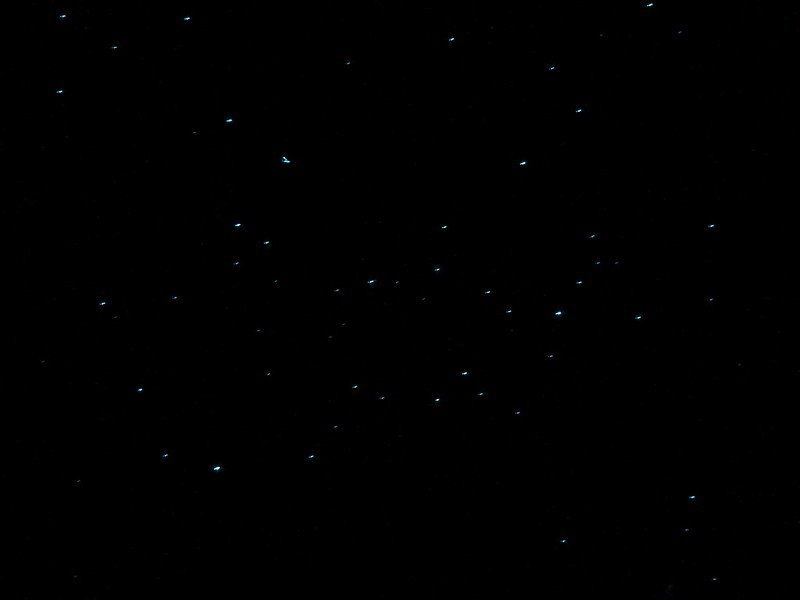 The phenomenon of glowworms is unique, at least to me. Other animals produce light, of course, and eyes glowing in the nightbush can sparkle just the same. The glowworms though are as if the stars were brought within arm’s reach in all their cold and distant glory. I find it endlessly fascinating searching for constellations unknown in the star field of the worms. That they live and are arrayed on the side of the road is a spectacular event. Their larvae eat fungus and other decomposing plant matter and need moisture and darkness to grow. Apparently this cut satisfied all their needs since they were thriving. 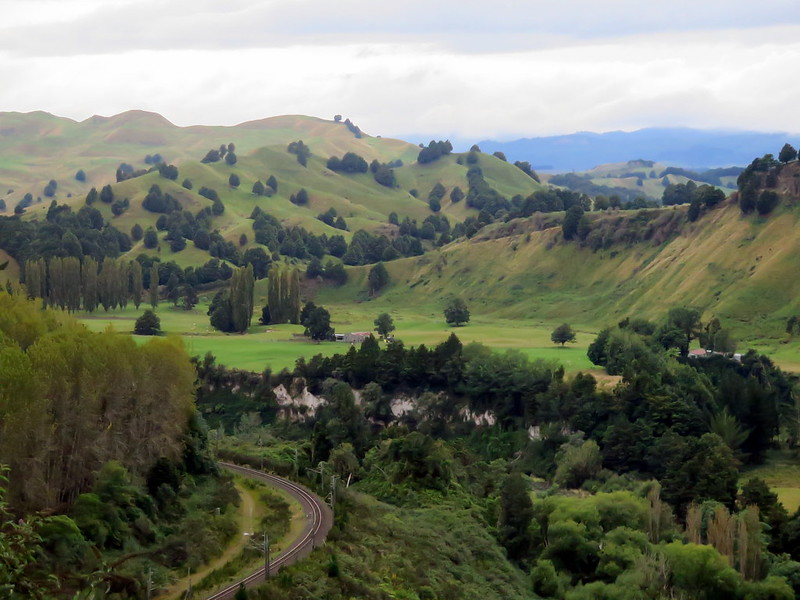 Our night of anxiety ended as we slept at a roadside stop near Taumarunui. We woke to the sight of familiar rolling hills and winding roads. All was well, and we felt embarrassed and very silly. A sincere thank you and apology to the kind Dutchman for his tea and food for thought.