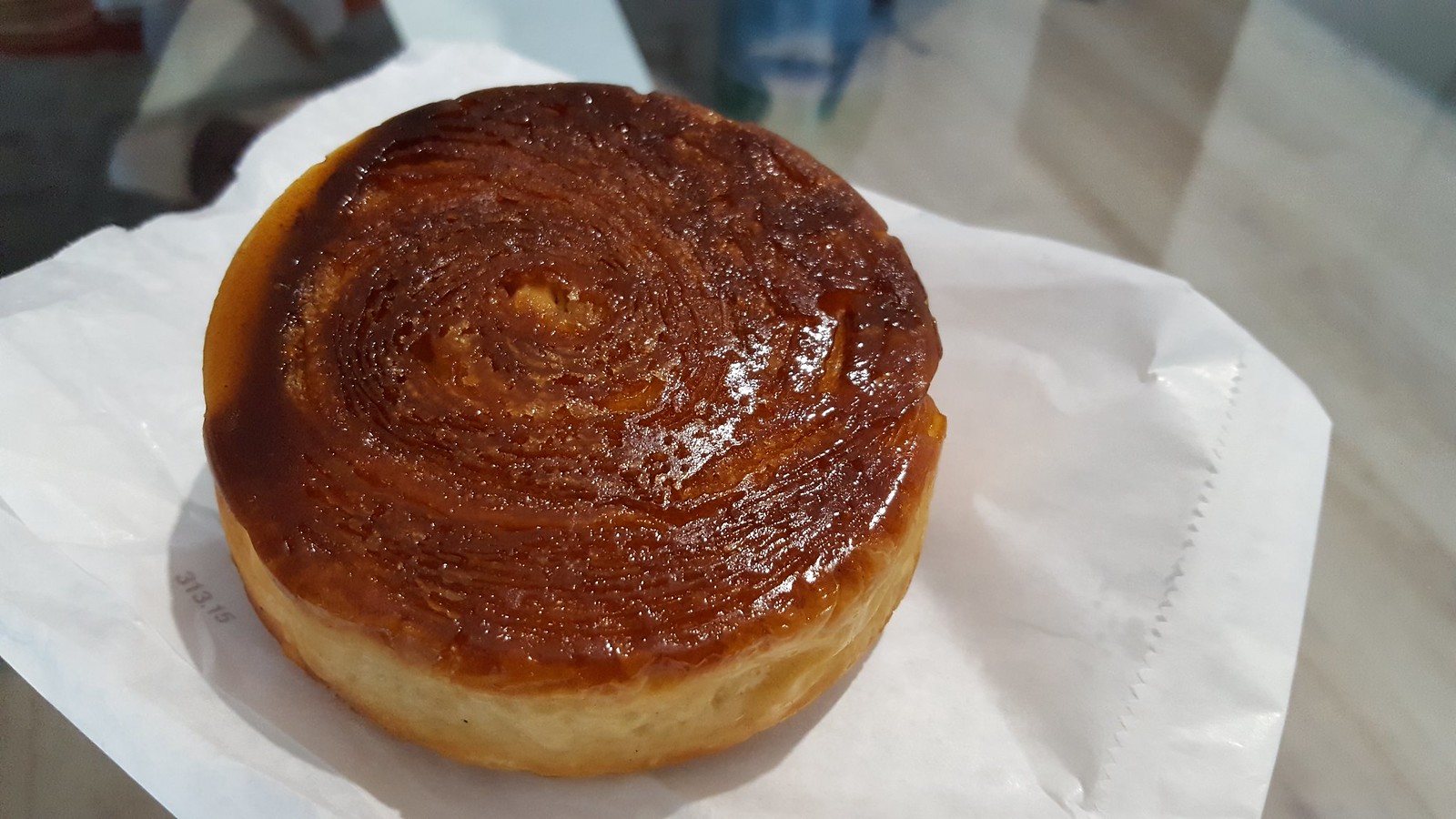 With a heavy heart we packed our bags, said goodbye to our friends, and headed out of Paris. 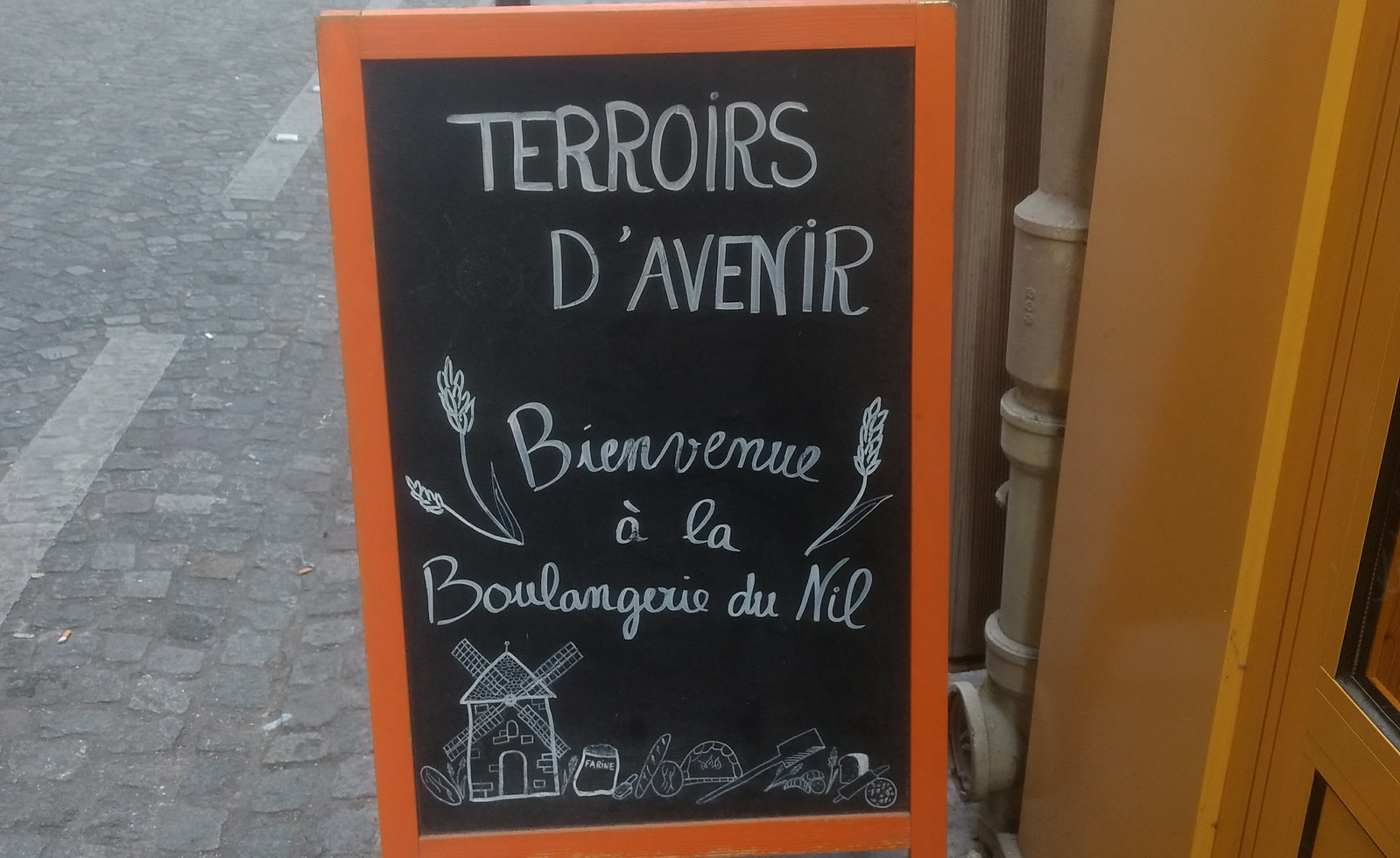 On the way out we made sure to stop by our favorite bakery and pick up a pile of delicious pastries for ourselves and the friends we would be meeting in Germany. Some of Natalie’s close friends from college were staying in Berlin and let us stay with them! 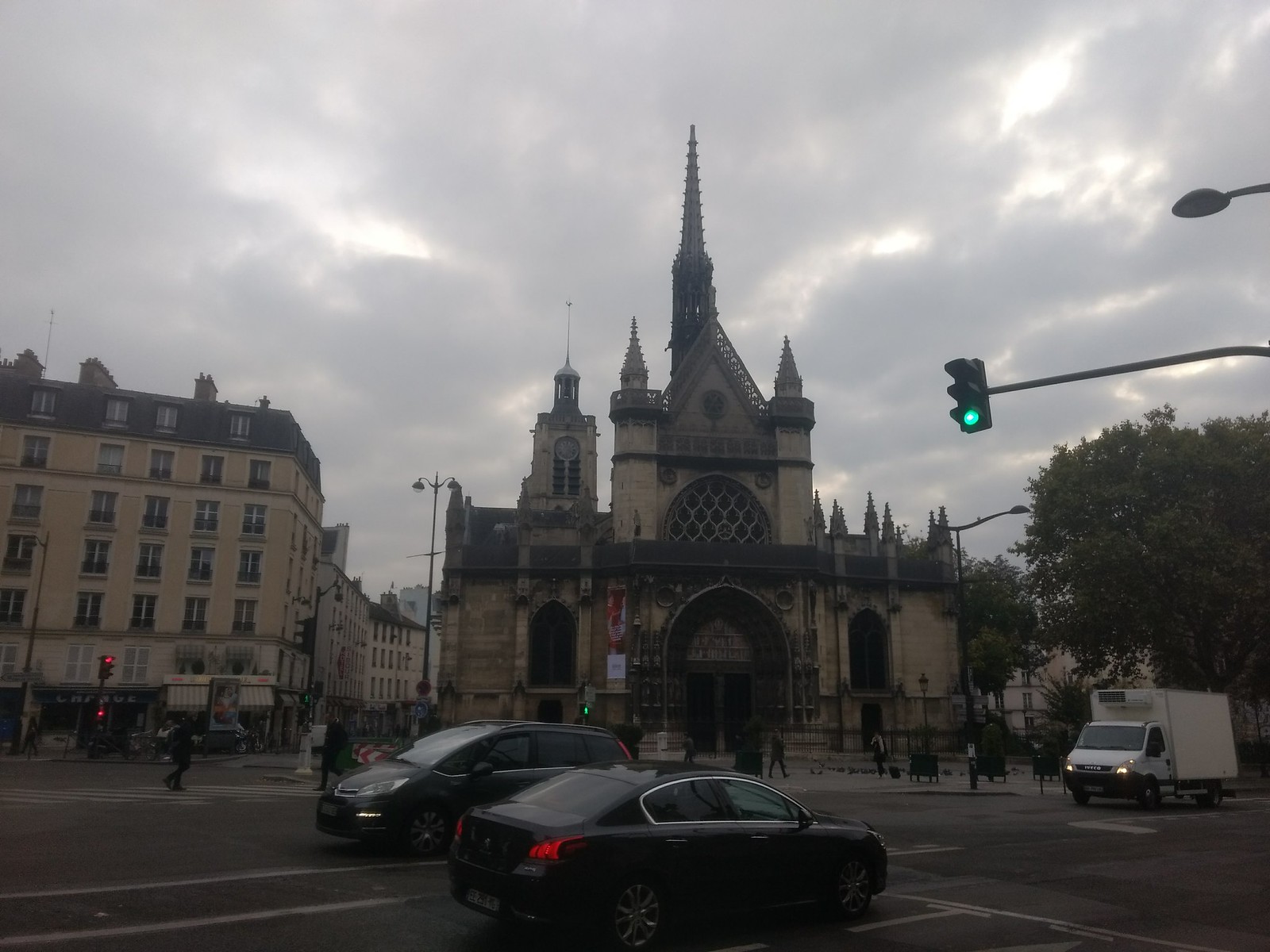 On the way to the station we saw even more fantastic architecture! We hadn’t had a chance to wander up this way before – it was less quaintly Parisian and more industrial, closer to a concrete, business-type city. The people were still stylishly dressed, of course. 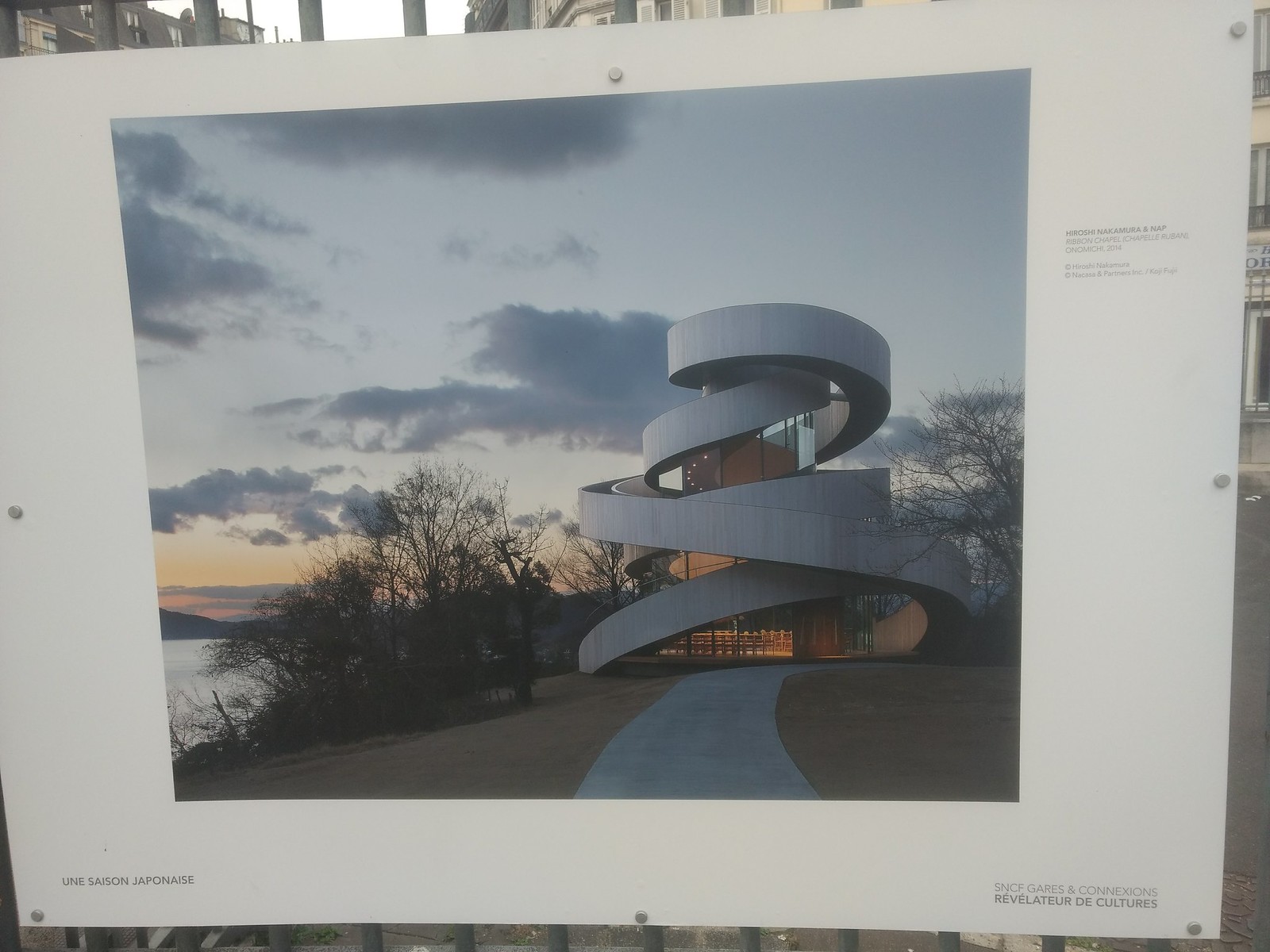 At the East Station we saw an outdoor exhibit on some of the world’s strangest buildings. 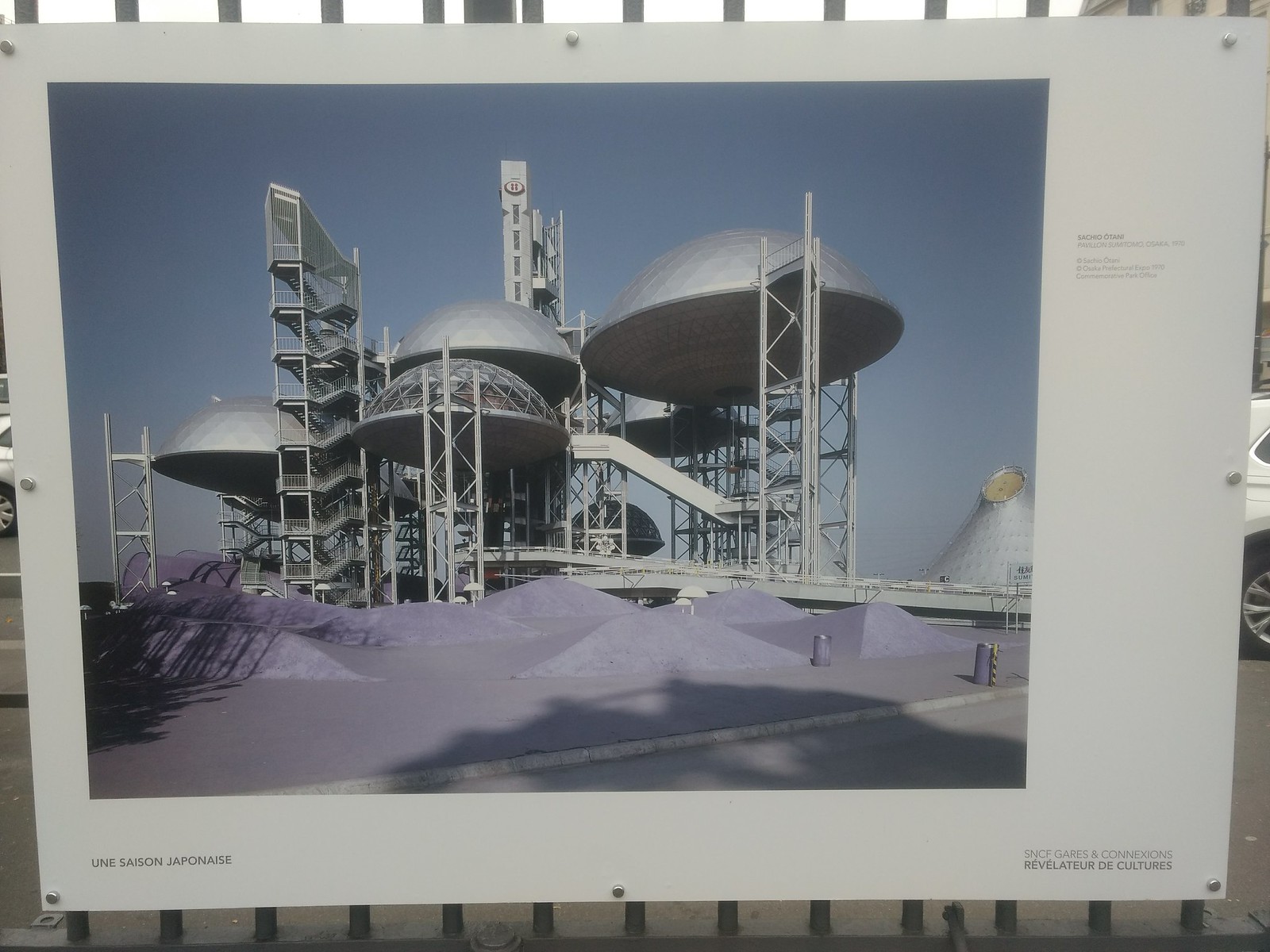 Bonus points for looking like a space colony. Many of these were in Japan, yet another mark for the mutual admiration that the two countries seem to have for each other. It’s such a big cultural exchange that Mariage Frères, a fantastic French tea company has a Japanese division – the only country in Asia that merits a full Mariage Frères store. 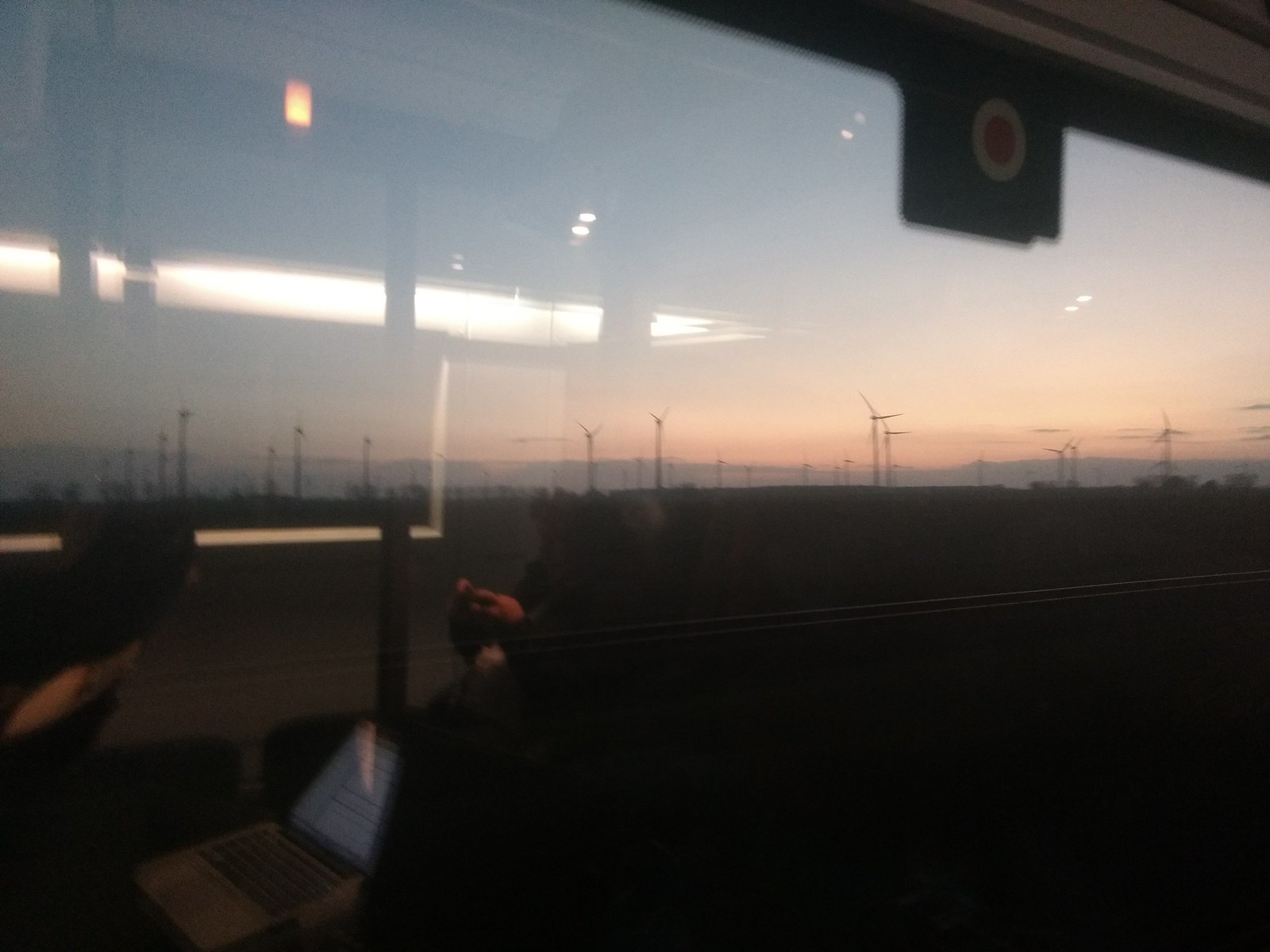 After a bit of figuring out where our train was at the station, we got on and peacefully rode through the French countryside onward to Germany and Berlin. Along the way we had to change trains, and about fifteen minutes after we did, we realized that something had not made it with us in the transfer. Our bag full of delightful French pastries was spiriting away from us on another train! Natalie’s leggings were also in the bag, but those were replaceable. After a vain attempt to recover the bag by calling the train company, we let the treats go and continued on to Berlin. A quick walk through the residential neighborhood of Moabit, which borders the station and is surrounded by rivers, we arrived with the rest of our belongings to a warm welcome at our friends’ apartment.

If you’re at Bromo/Cemoro Lawang and need to get back to Jakarta, the only feasible route (as of April 2017) is through Probolinggo and Surabaya.

Your first step is to catch a minivan from the center of Cemoro Lawang that will take you down the mountain for ~40,000 IDR ($3.00 USD). On paper these vans leave every hour, but realistically they leave when they’re full (about 13 people). It will help you to recruit others going down so you’ll leave sooner, or you can all agree to pay your driver more money to leave earlier.

If the road to hell is paved with good intentions, then there weren’t many good intentions to be had when they paved the road down to Probolinggo. It’s bumpy, windy, and your driver will go fast. Buckle up (if you can) and enjoy the ride. You’ll pass tons of adorable little villages, where at midday uniformed schoolchildren crowd the streets as they walk home for lunch. Whizz past them and fear for their safety with drivers like yours on the road.

In Probolinggo, the van driver will drop you on the street across from the Probolinggo bus station. Ignore everyone trying to help you with your luggage, signs advertising bus tickets (there’s a markup), and men trying to call you over and go straight into the bus station. The bus you want will say Surabaya, but you can double check by asking other people on the bus for Surabaya.

Now here comes the hard part: ONLY pay the ticket collector once the bus is moving. Ignore the guy or pair of guys that board the bus and tell you to pay for a ticket from them. Do not hand over money for the official-looking bus ticket in their hand. It is a scam targeting foreigners and that is a fake bus ticket. If they get angry at you, stay calm. If they yell at you to get off, get off the bus and stand in front of it. The real bus driver will have a laugh at the scammers’ failure and usher you back on the bus. ONLY hand over your money once the bus is moving, and give it ONLY to the guy you see all of the locals paying. And check your change, as he may try to shortchange you. A ticket from Probolinggo to Surabaya cost 20,000 IDR ($1.50 USD) in April 2017, and you can always ask ‘harganya berapa di Surabaya?’ (“How much to Surabaya?”) to a person next to you.

Phew. Made it to Surabaya? Then you’re past the difficult part. You’ll likely be dropped south of city proper at Purabaya Bus Station, and it’s up to you to take a bus to the train station or airport. There is a WONDERFUL info booth in the bus station where the staff know some English, so politely decline the taxi callers and make your way there. As of April 2017 the bus to the train station was the P5; it cost 6,000 IDR ($0.45 USD) for a ride and took about 30 minutes. We had no scam problems, but it’s literally crazy taxi bus edition, so sit at the front for the 90 km-an-hour ride of your life along Surabaya freeway.

You’ll get off on the West side of the train station, which as far as we could tell had no actual entrance. You’ll have to find your way around to the other side of the station with a map or asking the super-nice locals. There aren’t really cheap street eats at the train station, but there are a couple of cafés and minimarts nearby. After buying your tickets, head over to stock up on snacks for the overnight ride back to Jakarta.

Today’s goal was to buy train tickets on to Yogyakarta, a city in southern Java known for its temples (Borobudur and Prambanan), arts, and culture. Buying train tickets here in Indonesia is usually just a short click away at Tiket.com, where you can browse and book bus/plane/train tickets. It’s so good that both locals and visitors use it, with a small hitch for us visitors: it randomly rejects foreign credit cards.

We were the (un)lucky winners of this lottery when the website refused our Chase card, so our only other options were to 1) have the hostel buy them and pay them back or 2) go down to the train station and buy tickets in person. In the spirit of adventure, learning, and later sharing with all of you, we of course opted for option #2. So, it’s off to Jakartakota to buy tickets!

Step 1: Know the train(s) you want

Tiket.com comes in handy even if you can’t/don’t want to buy online because it has a schedule for all the trains. For reasons that’ll become clear in a couple of steps, write down or print out the details of 2-3 trains you’d be willing to catch from the website; write more if it looks like there are few seats left on the train you want. Likewise, note the price. When you head off to the station, make sure you have both your travel identification (for us foreigners, usually the passport) and enough to pay for the ticket in cash.

Step 2: Be prepared to navigate a busy station (and ask for help)

Tiket.com may be convenient, but not everyone in Indonesia has the means to pay online so expect a wait to buy tickets. The length varies by time and station, of course, but when we arrived Jakarta’s main station (Gambir) looked like this:

Though Indonesia has a lot of bilingual Bahasa/English information, not everything has been translated and the train station can feel overwhelming. But a lot of people here speak a bit of English and “tiket” is the Bahasa word for “ticket”, which is super helpful. We found that asking for “tiket Yogyakarta” got us pointed to the right set of windows. From there, a family helped us get a number (like those you get in waiting rooms or at the deli counter) and a ticket form. Speaking of…

Step 3: Fill out your form!

This is how everyone in Indonesia bought tickets before the Internet age and how you’re gonna buy tickets now: get a form, fill it out with the train you want, and hand it over to the teller when your number is called. This is where the train information you got in Step 1 from Tiket.com comes in handy; after filling out the personal information, write in the date/time of your #1 train choice. Now it’s time to wait for your number, which should appear on a screen above the ticket windows.

Step 4: Exchange your form and cash for a ticket

Once your number is called, gather your travel document and completed form and head to the designated window number. Hand the form over, and the ticket teller will let you know if there are still any seats on the train you wanted. The teller we encountered here spoke English (although not all do, so memorize those numbers in Bahasa or write them down) and told us that our first train choice was sold out. This is the situation where your list of second/third choice trains comes in handy. Don’t worry about filling out another form, just ask about the availability of other trains or show them your list. Thankfully we had a second train choice and finished the ticket purchase in a couple of minutes.

Step 5: Get your actual ticket!

“What?!” you exclaim, “Didn’t I just get my ticket?” Nope. Java’s train system runs like an airline, meaning the voucher you get isn’t your actual ticket. You should arrive at the station 30-40 minutes early and exchange the ticket you got for a boarding pass ticket, usually at kiosks or computers just before the security check. The security check guys know what’s up (they’ve helped a lot of people do this), so they’ll show you where to scan the document or do it for you.