Despite being a bit shy in vegetables, Austria makes up for it in desserts. Every region seems to have its own thing going on, and everyone we asked had a different favorite dessert. We were not disappointed in the variety.

We start with the Mozart candy. Sightseeing around Vienna, it’s almost impossible to avoid these chocolate balls wrapped with Mozart’s face. 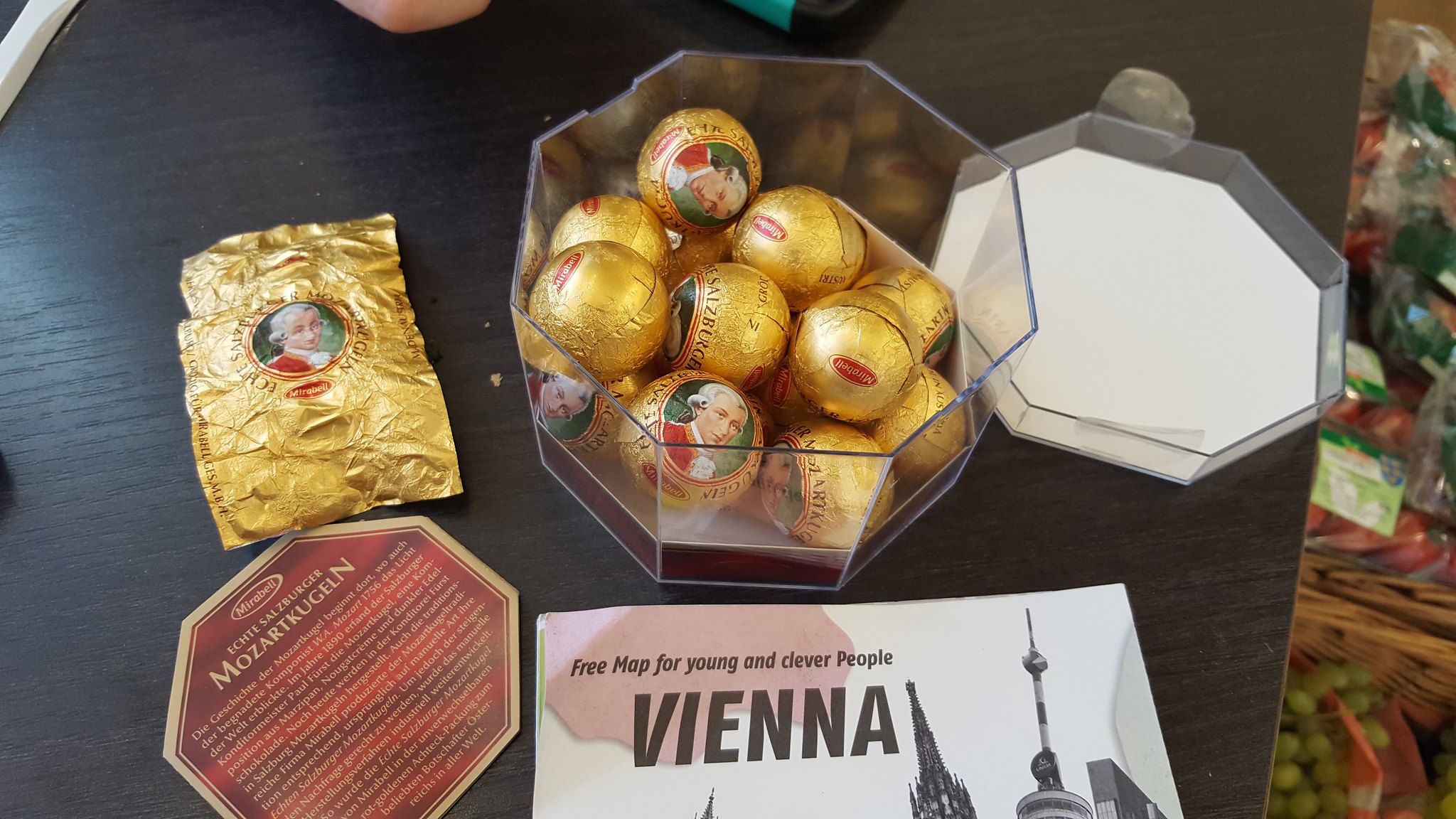 Called ‘Mozartkugel’ – Morazart balls, they are a 1890’s development by an Austrian confectioner. They became popular and now many companies make them, as this page shows. The Mirabell ones are available everywhere and they’re.. ok. Not super, but not terrible. Were we to go for another round, we’d try a different brand.

Next up are Manner Wafers! Almost as unavoidable as the Mozart balls, and seemingly more beloved. They’re in every grocery store and they’re sold from single packs of four wafers all the way up to 16 packs and up. Our hosts in Wels (near Linz) told us that every household keeps a stash of these on hand for random occasions and also just every-day snacking. They’re very good indeed. Our picture of them, is not. 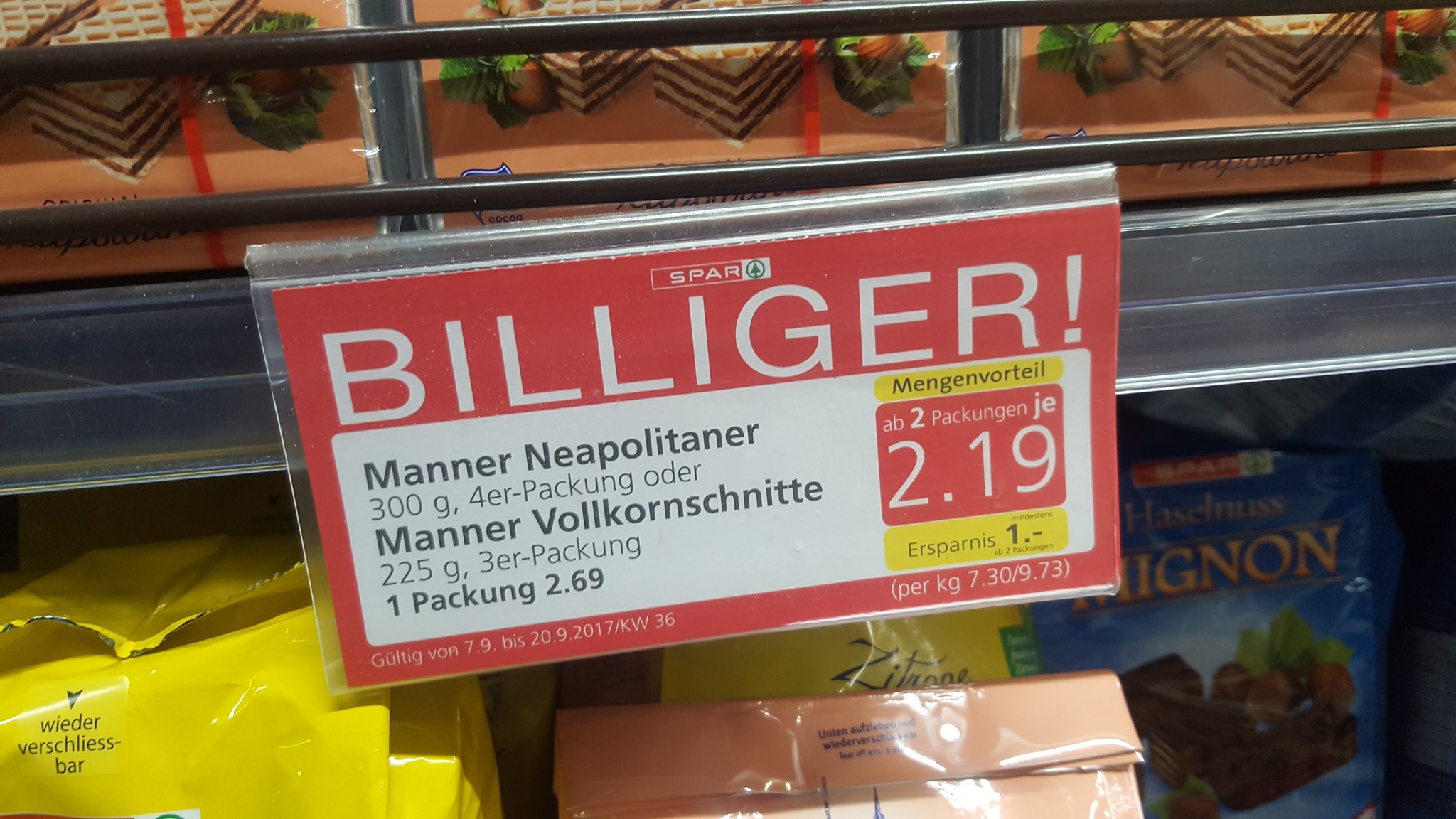 You can see the bottom of the wafer wrapper in the top of the photo. For an actual photo type thing, go here. I really liked the manner cookies – not too sweet and just the right touch of hazelnut.

Past the supermarket shelves, Austria has a whole slew of ‘tortes’ – cakes, usually a little bit fancy. The one everyone said we should absolutely try was the Sachertorte. It’s chocolate cake, thin layers of apricot jam in the middle, and a smooth coating of dark chocolate. We had one in Prague, of all places. In a Starbucks. For shame. And really, it would have probably been better in Vienna, the Starbucks version was acceptable but not spectacular. 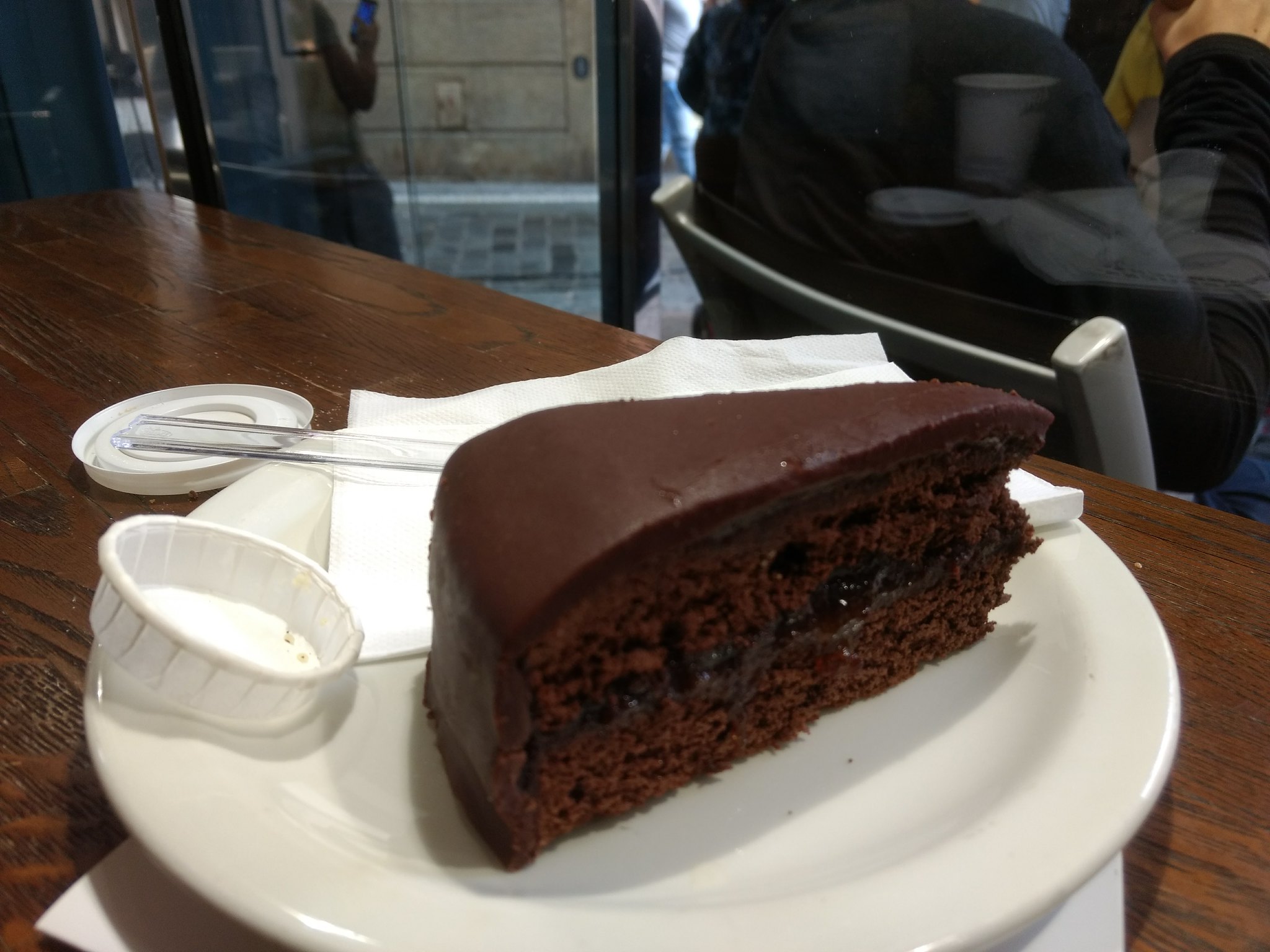 This cake is generally extremely popular. It was so popular it launched a hotel for the creator – the Sacher Hotel. There was a bit of a legal spat about the rights to the ‘Original Sacher Torte’ name and trademark, but it seems to have been worked out and you can get one at either of the Sacher Hotels, the Sacher Cafes, and a few other places. There are also quite acceptable and delicious variants found in bakeries all over Vienna.

Last, and certainly not least, is the Linzer Torte, named after the city of Linz. Natalie had read up on this and knew we needed to try it. Apparently, there is the one highly suggested home of the Linzer Torte – Konditorei Jindrak. Like the Sacher Torte however, there are many variants available, all of them probably quite delicious. We got to the Jindrak Bakery just as it was closing, so we snatched our cake and went on our way. Around us, the rest of the town closed slowly – except for the pubs and restaurants. 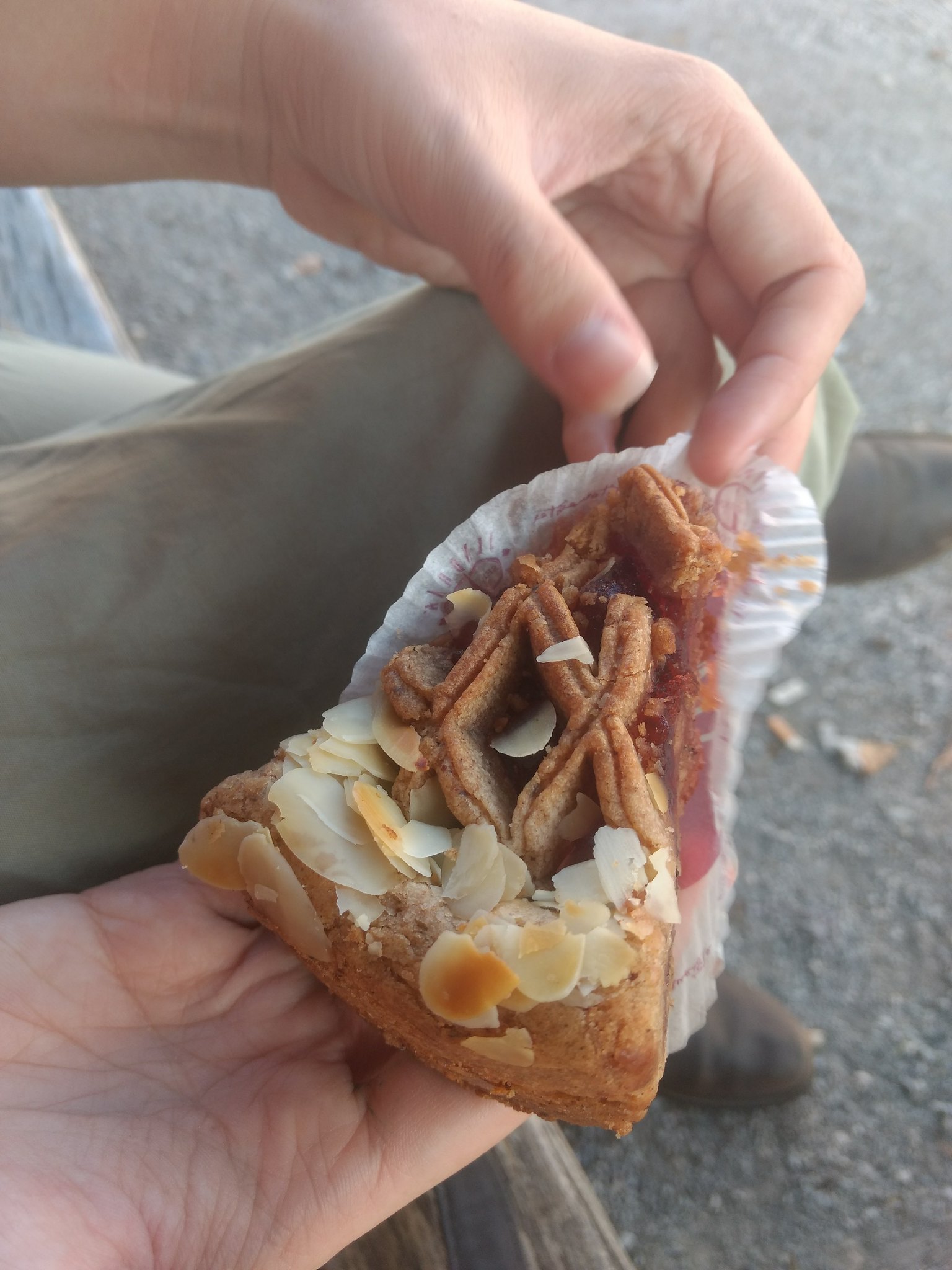 We tried two varieties – the original, pictured above. And.. 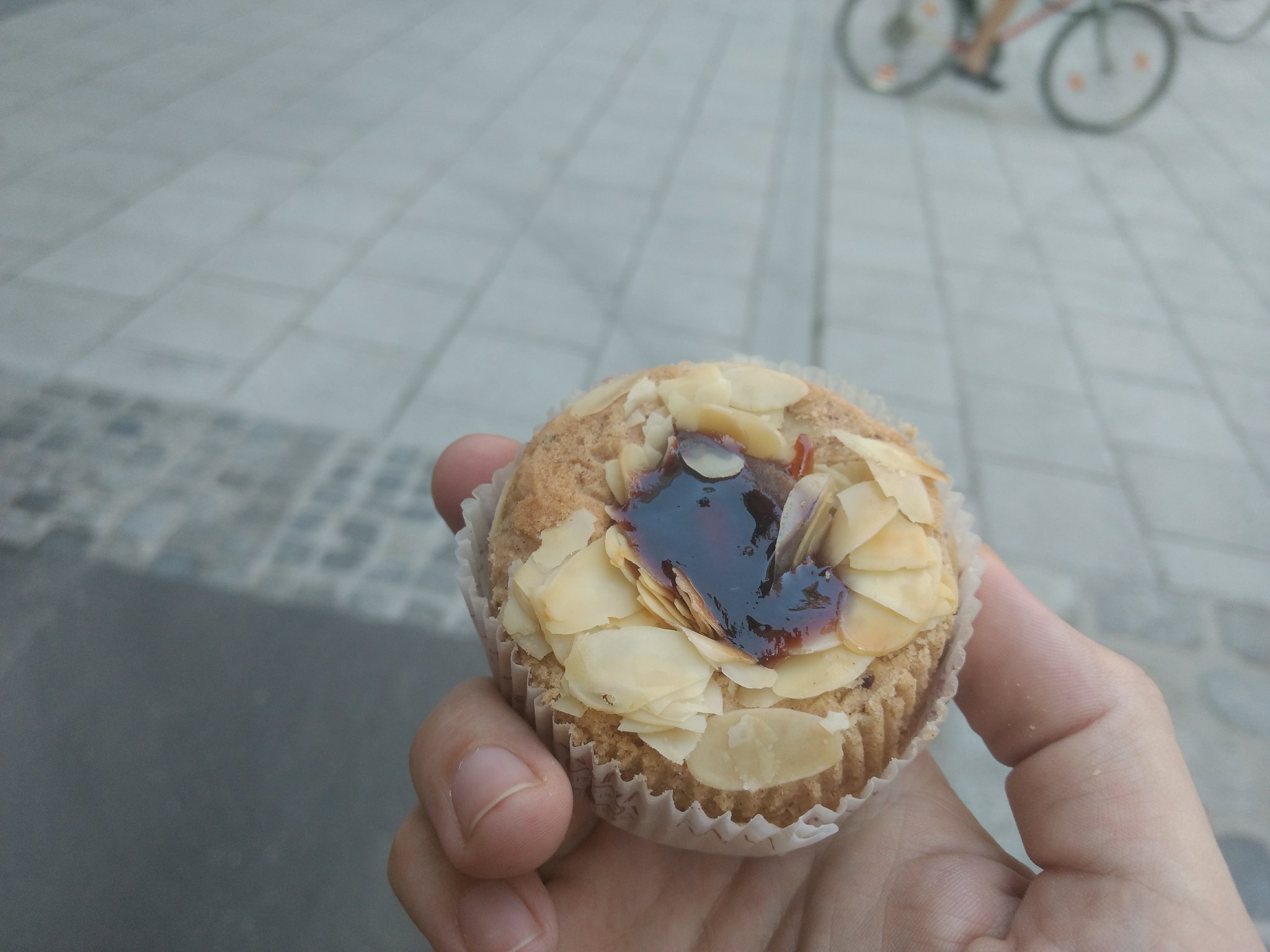 the cookie variety! It’s cuter and looks more edible but it falls apart faster, and the original torte-style seems the better of the two.

The cake, in either of its forms, is a crumbly mass of dough covered in a fruity jam and spiced with cinnamon and lemon zest. The toppings are refreshing in the face of the somewhat heavy dough. As a warning – this is a very crumbly cake. The cookie version was almost impossible to eat without a massive trail of crumbs. Definitely a sit-down dessert. However, we found it worth the effort of keeping intact. It’s sugary but not overly sweet, and the tang and spice of the jam and lemon zest really perk it up. The Linzertorte holds claim to being the oldest cake recipe in the word, having a record dating back to the 1600s. We’re glad it’s still being made!

Next up, we catch a train from Budapest to Vienna, our first foray into Western Europe and a bit of a sticker shock. Food, places to sleep, and things to do cost almost twice that of neighboring Hungary and there really aren’t many cheap options. Still, it’s part of travel, and we adapt to the circumstances: we adjust our budget to $80 USD daily for food and board for the two of us.

And the food…well, the desserts are absolutely lovely. The rest seems to be mostly fried meat/cheese/sausage and it’s not great, although with our limited funds we’re obviously not eating the highest-quality stuff. When we’re tired of fried things, the only other affordable thing is Doner, now ubiquitous as the cheap-and-fast choice in nearly all of Europe.