They’re everywhere in the Galapagos, on every island, hanging out on the beach, clinging to rocks on the shore, and scrabbling up steep cliffsides. They collect in the hundreds, sunning their gray-black bodies between trips to the water’s edge to munch on the algae that sustains them. Darwin famously called them “imps of darkness”. People think they look ugly and stupid. And few come to the Galapagos specifically to see them. They’re the Galapagos marine iguanas (Amblyrhynchus cristatus), and their unpopularity is totally unwarranted. 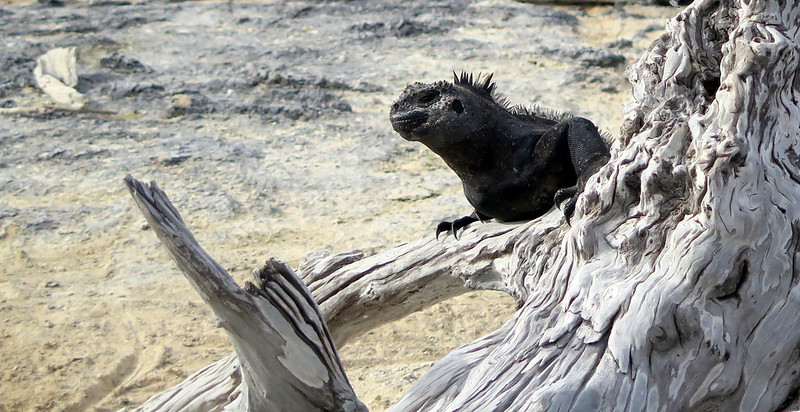 The Galapagos marine iguana’s appearance doesn’t do it any favors, but it looks this way because of the harsh Galapagos environment. The marine iguana’s snout is short and stout compared to other lizards, a change that helps them eat their primary food, marine algae. The iguana’s skin has also darkened to deep green, grays, and blacks, enabling it to absorb more heat from the sun’s rays after swimming in the frigid Galapagos ocean. And the iguana has developed long, sharp claws; these help it cling to rocks on the shore, against  in the face of pounding waves and merciless surf. So despite the consequence of appearance, the marine iguana is a highly capable creature adapted to life in the Galapagos.
Besides winning in the ‘surviving the Galapagos’ contest (which by the way, humans have frequently lost), these iguanas also have some adorable quirks. As you walk by them on the shore, you’ll hear brief hissing noises, like someone incredibly tiny blowing their nose. This is the marine iguana sneeze. Like saltwater crocodiles, these iguanas have to get rid of the excess salt they pick up in the ocean and the algae they eat. But unlike crocodiles, who cry ‘crocodile tears’, iguanas have opted to sneeze it out. So don’t worry, they’re not suffering from the flu.
You’ll also often see iguanas wobble their heads up and down, as if they were some sort of living bobble-head. This is the marine iguana signal that it’s time to mate, a sort of “Hey bby :)” for the females and a “GTFO” for other males. Smaller males will take the hint and leave, but if the males are the same size, the other male will challenge the first with his own head bobble. Then the two iguanas will sit there for a few minutes, bobbling heads at each other, until one of them finally gives in and leaves or (very rarely) a serious fight goes down.
Then there’s the basking, which takes up more of the iguana’s day than eating, sneezing, mating, and fighting combined. Because the water of the Galapagos is seriously cold, the iguanas spend most of their days either preparing to go into the ocean or recovering from swimming in it by basking in the sun. They’ll do this for hours, while sitting alone or socializing together, sitting up awake or collapsed napping on the sand. Most reptiles do some variation of this, but have you ever seen one look so happy to feel the sun’s warmth?
Haters gonna hate, but the Galapagos marine iguanas are happy nonetheless.