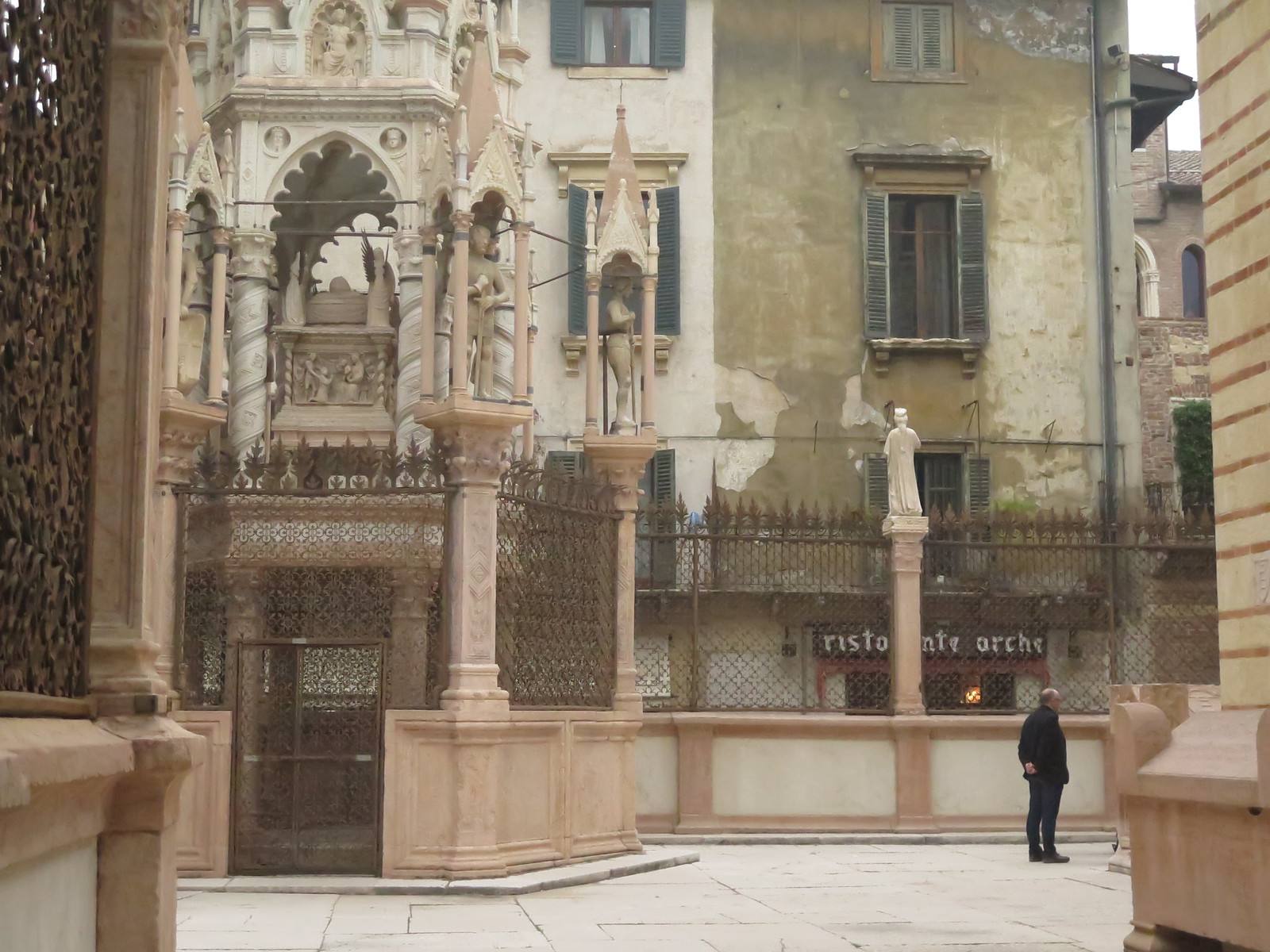 Like many other Italian cities, Verona’s architecture is fantastic. The historic center sits in the middle of a peninsula, where ancient cathedrals, churches, and even a Roman coliseum sit side by side with old residences converted to shops, restaurants, and markets. It’s also a very popular tourist spot – close to Austria and Switzerland, it gets a large number of visitors from both countries and the rest of Europe, especially young school and college groups. In the most popular spots it can feel a bit crowded, but for the most part it’s 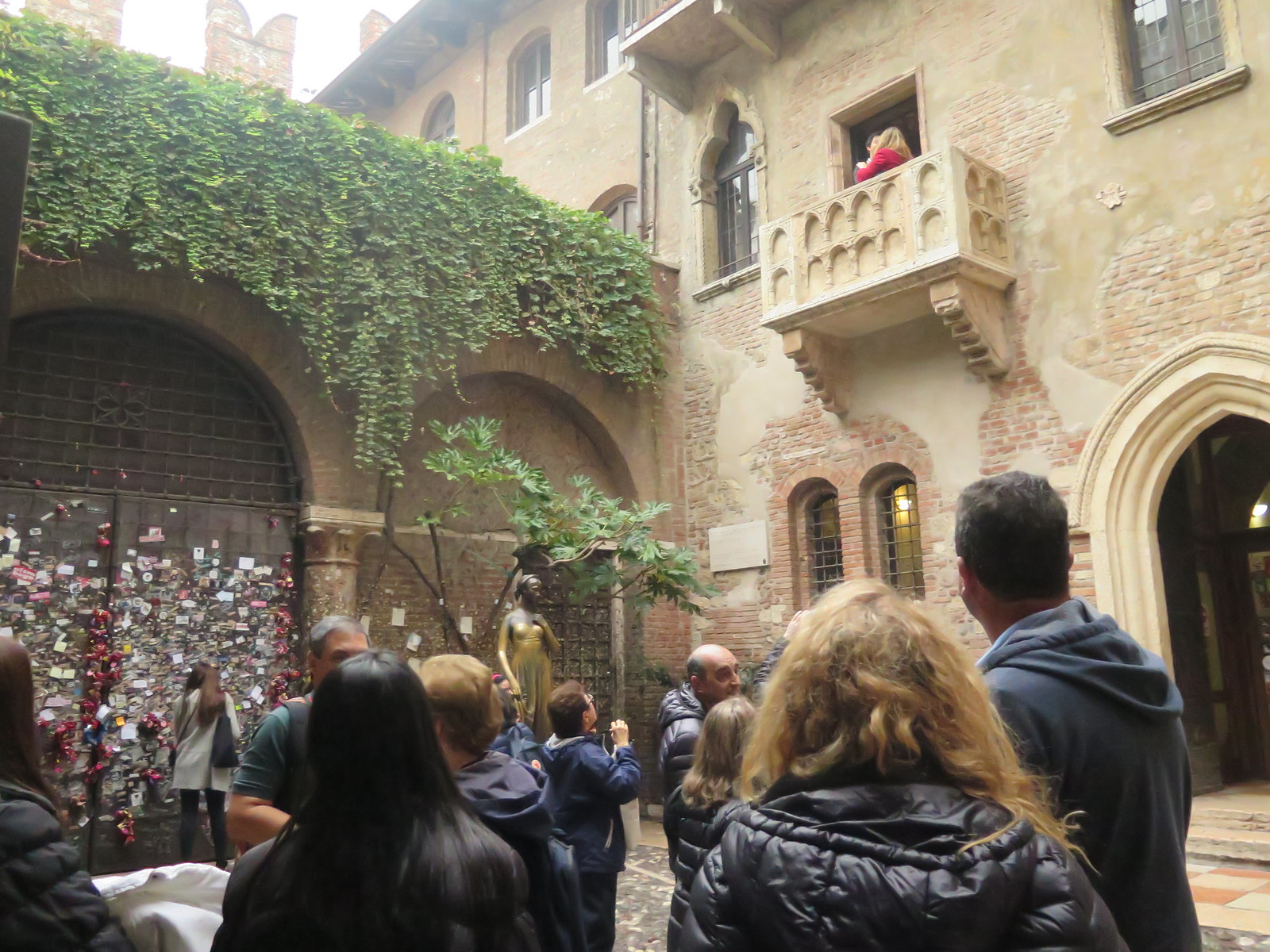 The famed sight in this city is supposed to be Juliet’s Balcony. It might have some literary interest, but overall it wasn’t worth the stop. It can be very crowded, the building is not particularly interesting. 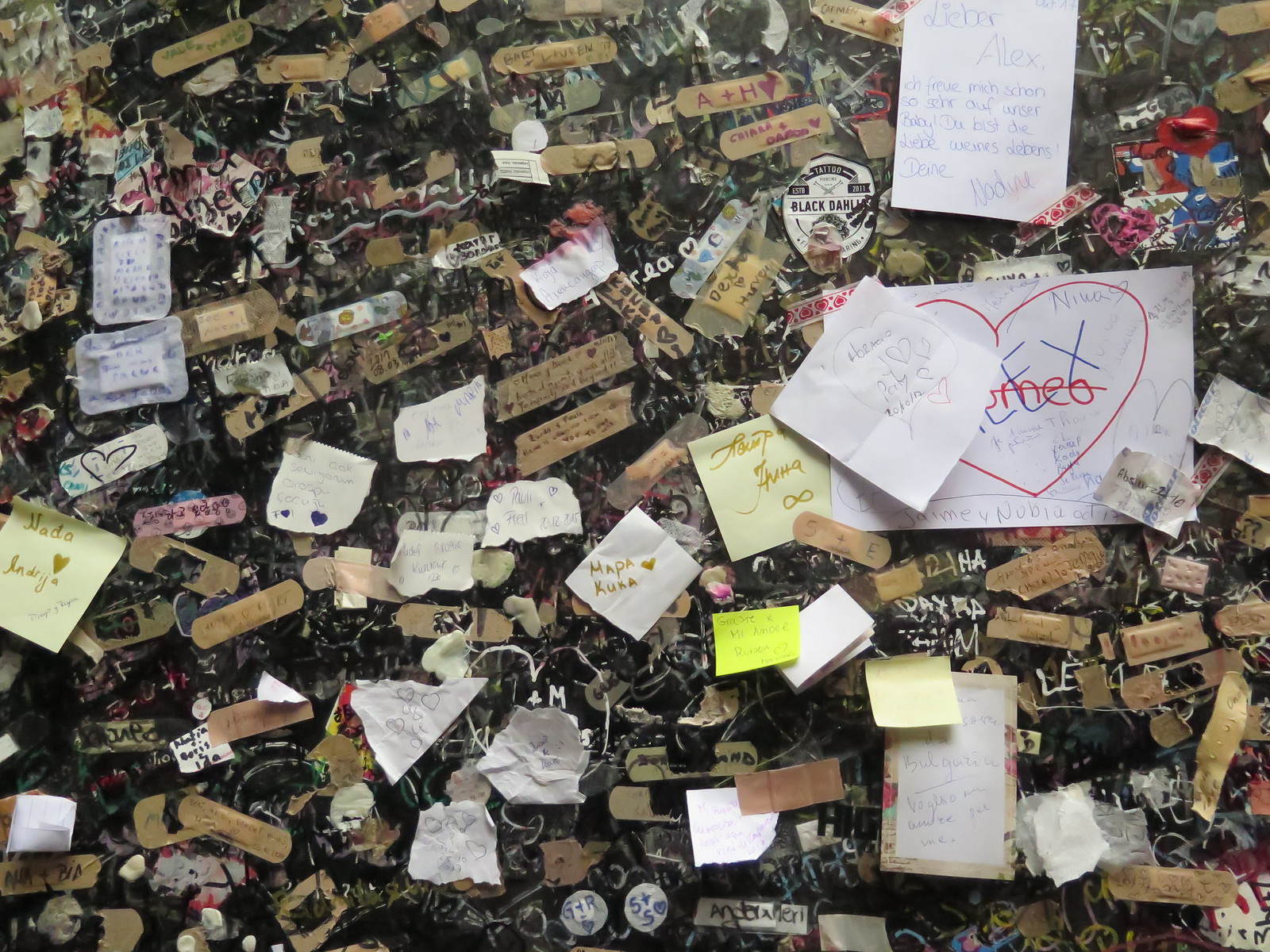 On one of the walls, people leave tokens of affection. Bandaids seem to be the thing to put up. There’s a little shop that sells pink themed everything, and while we were there a couple went through a proposal up on the balcony as the crowd watched. 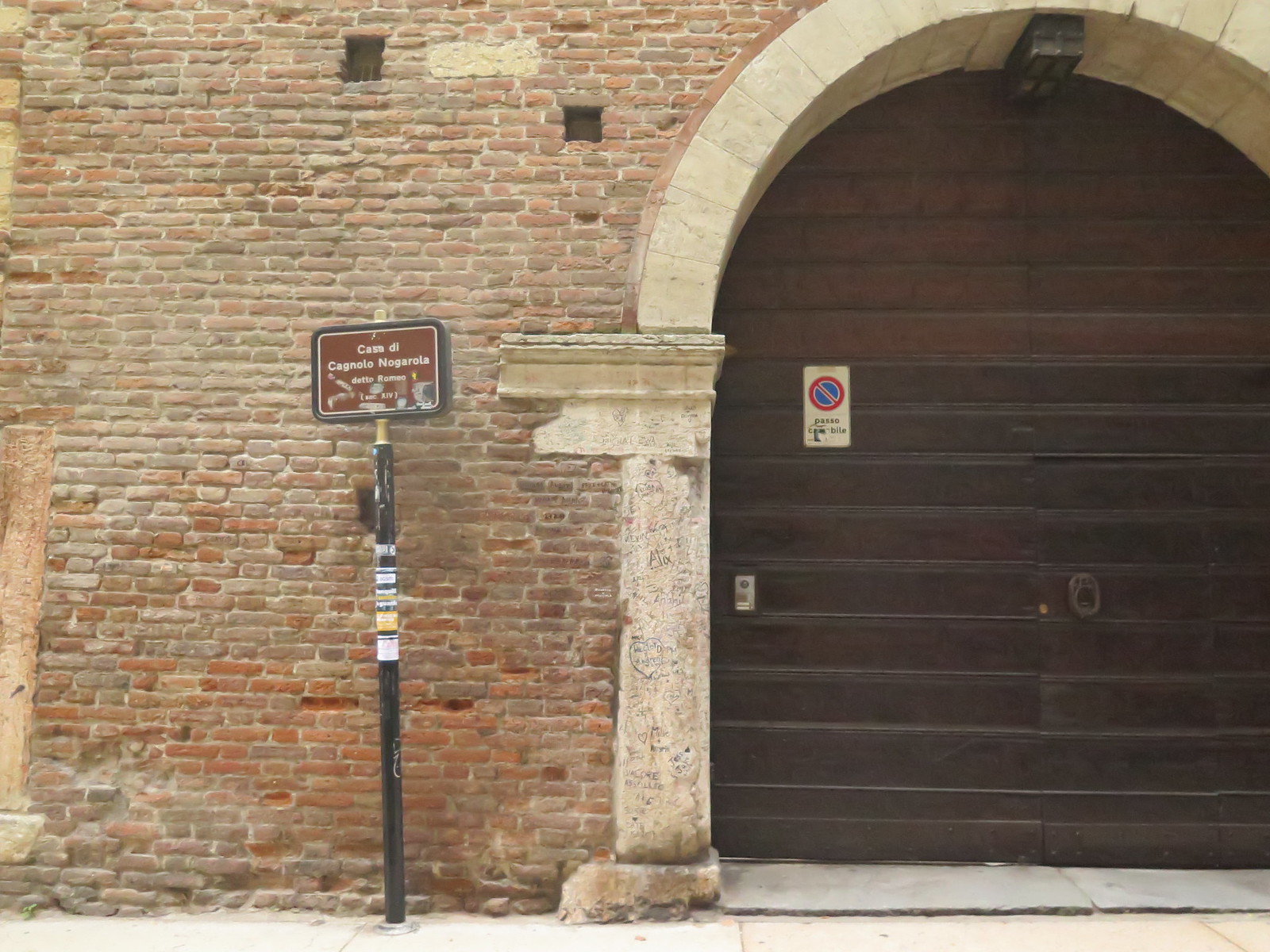 The house of Romeo is also in Verona, and is much, much less popular. 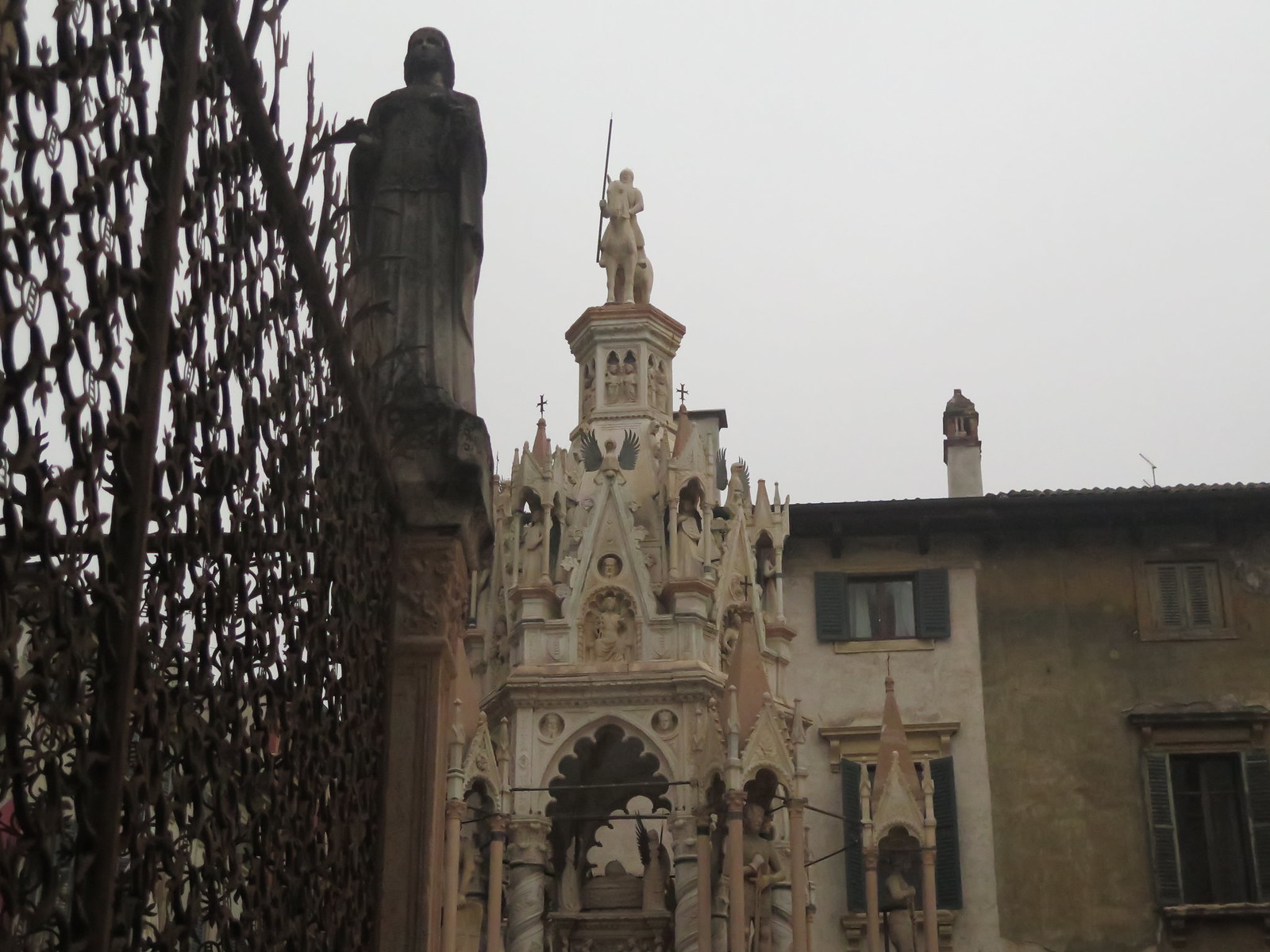 Nearby Romeo’s house is a real gem of architecture and sculpture – the Scaliger Tombs. Once a ruling family, now a mausoleum. The style is gothic and stands out with its pinnacles and spikes among the straight lines of the rest of the city. 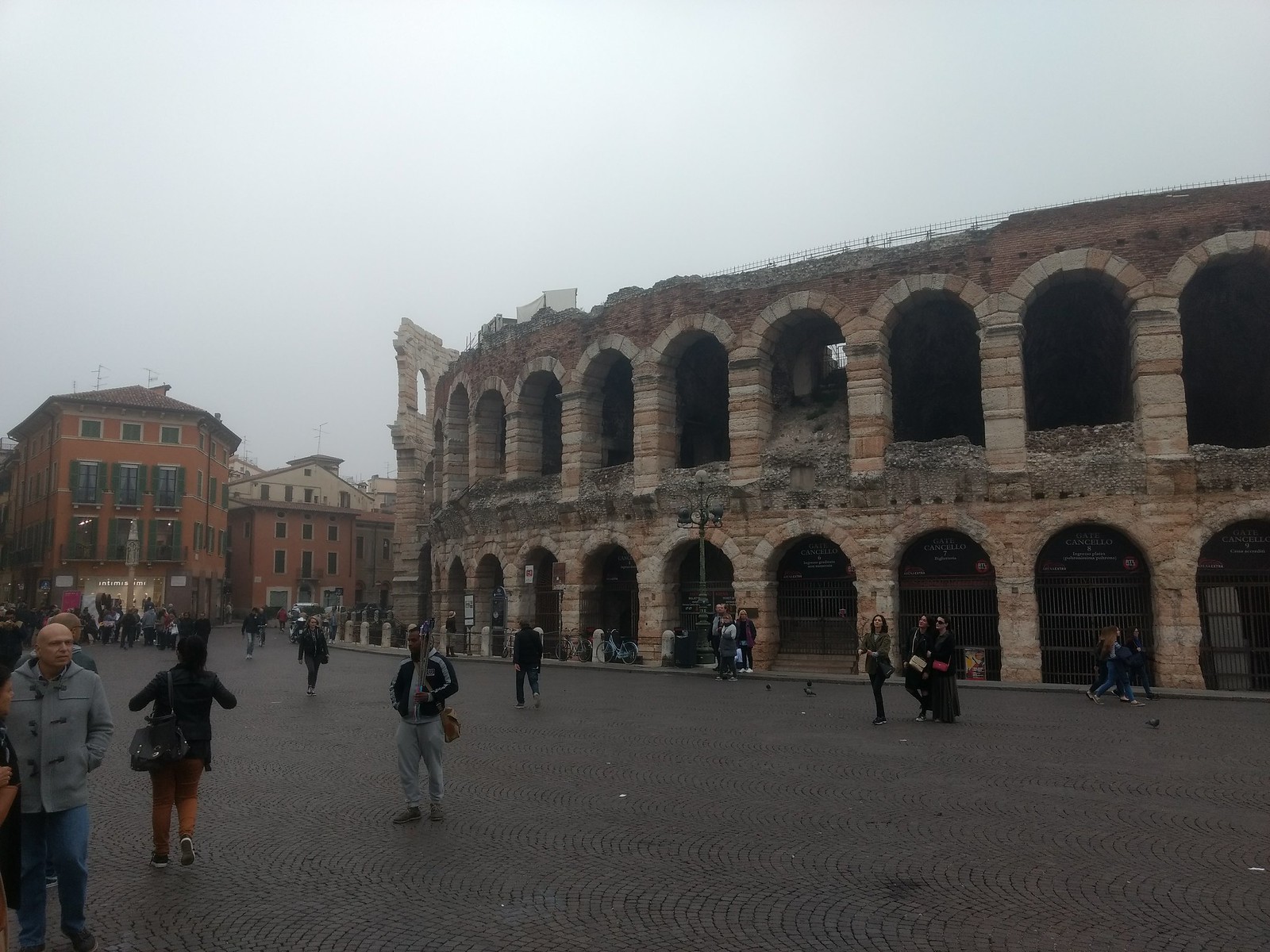 The arena in the south of the city is still used for holding events. On the rainy day we visited, it was closed except for a fairly pricy tour. For me the real beauty is from the outside, how the arches have held up over the centuries. 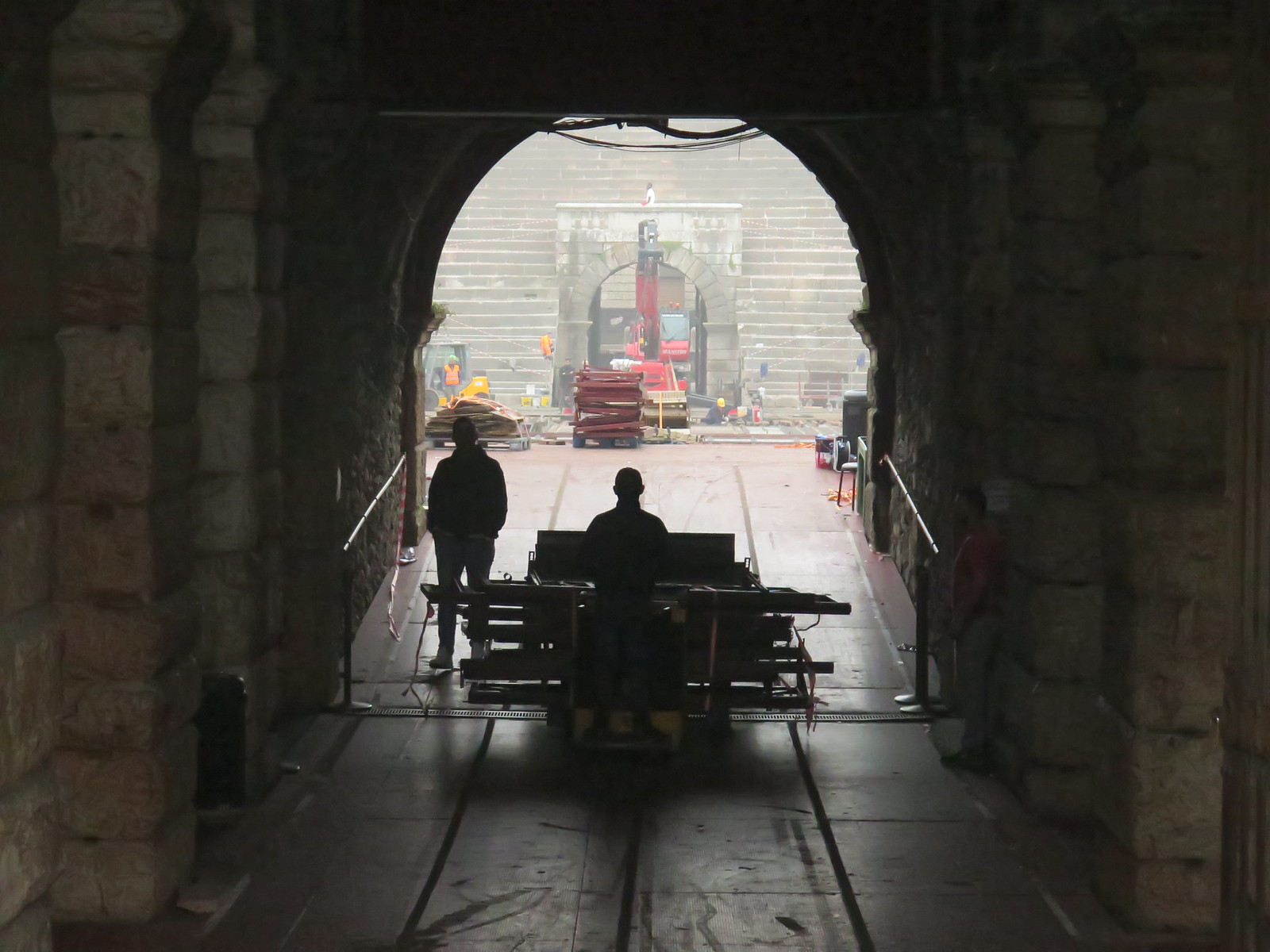 We also got a peek into the repairs going on inside! 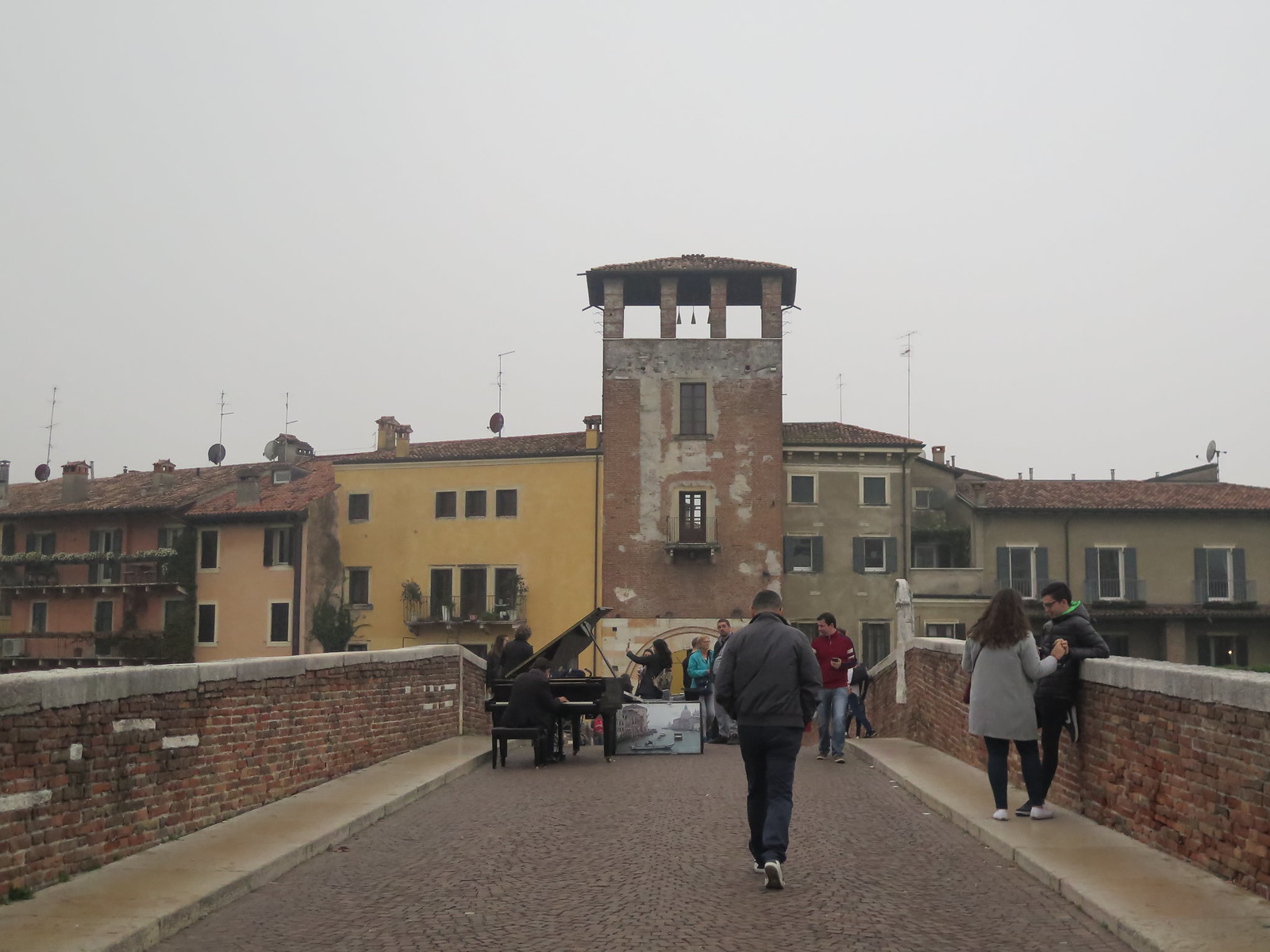 All around the peninsula are bridges connecting it to the mainland. We crossed on the north east side, only to find a traveling piano player playing from the middle of the bridge. 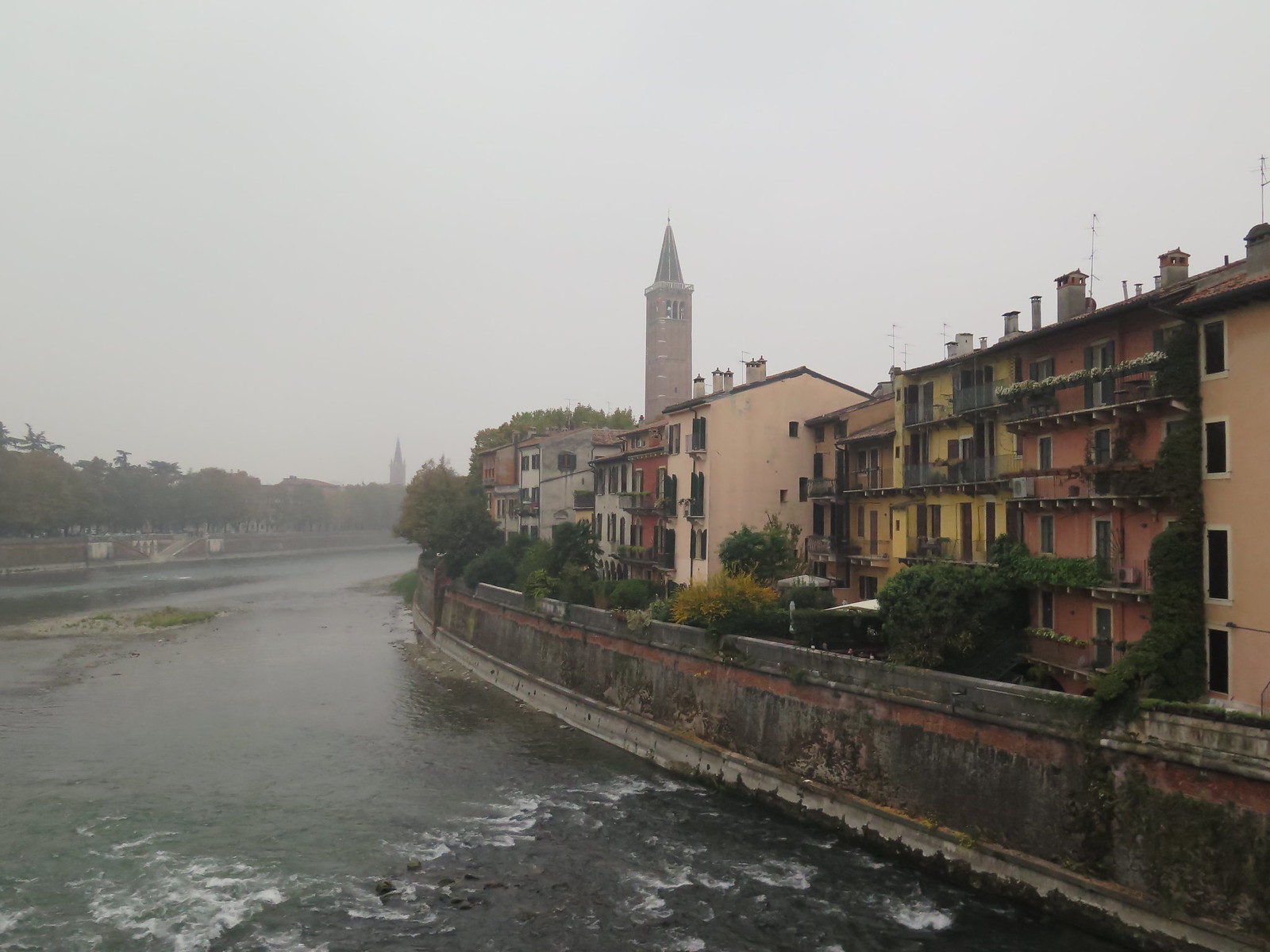 The restaurants and houses crowd the water’s edge on the old-city side of the bridge. 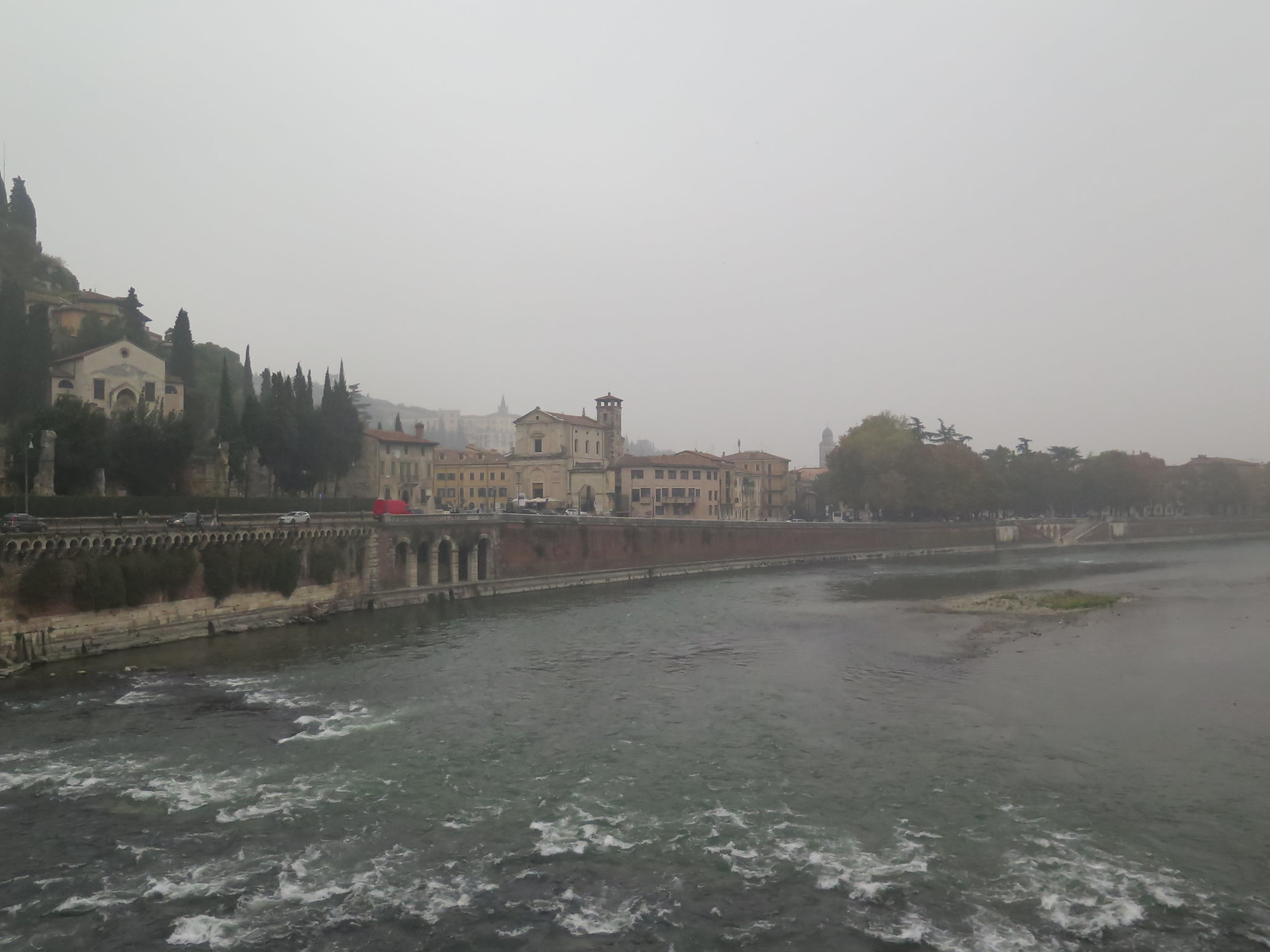 Across the other side there’s more room to expand. A wide street runs along the river, bordering the many churches.

The bridge itself is of lovely old Roman construction – unfortunately not original. The Ponte Pietra was destroyed during WWII and later rebuilt. 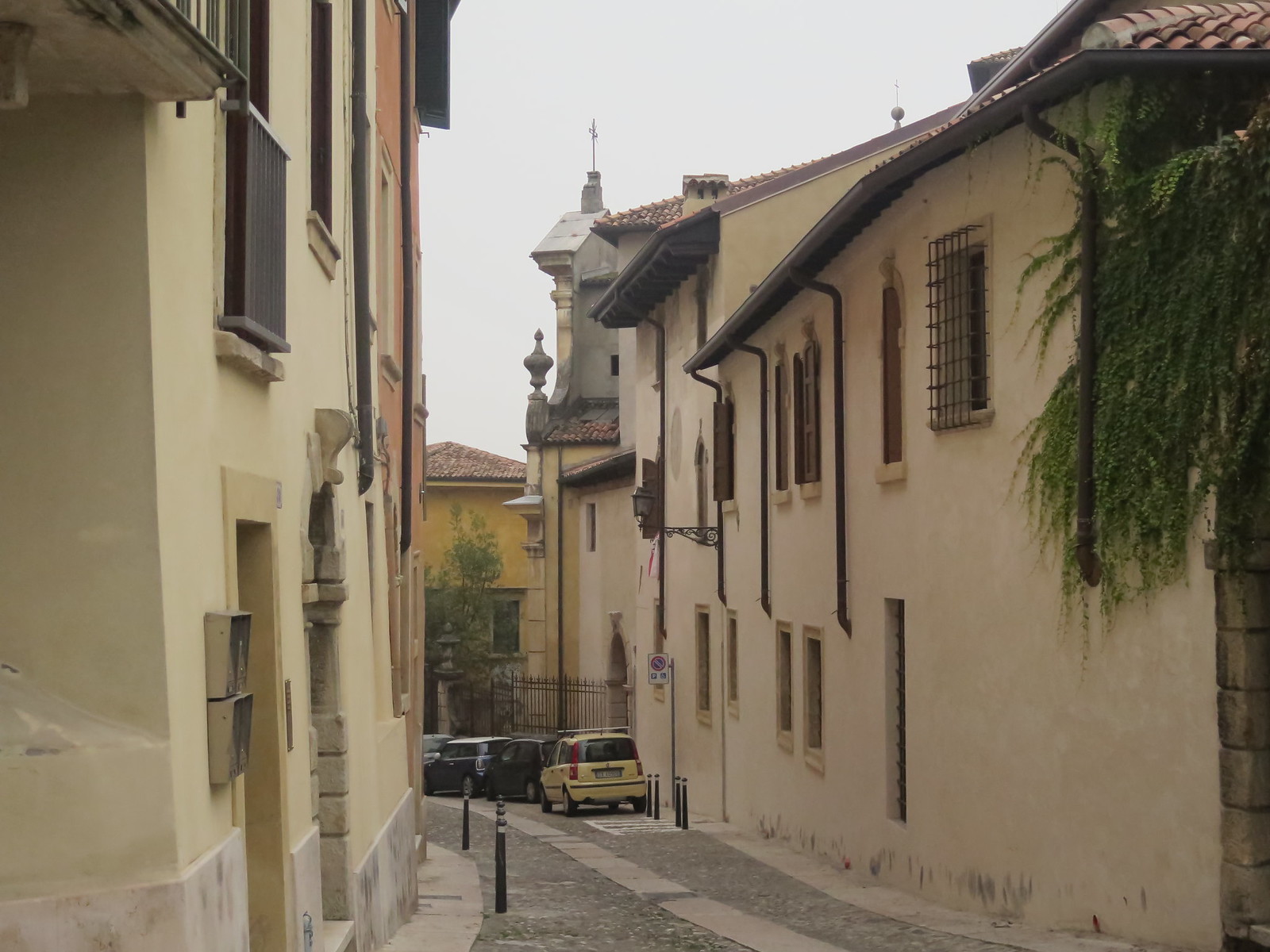 We tried climbing up into the hills, but wound up lost in a series of small alleys. 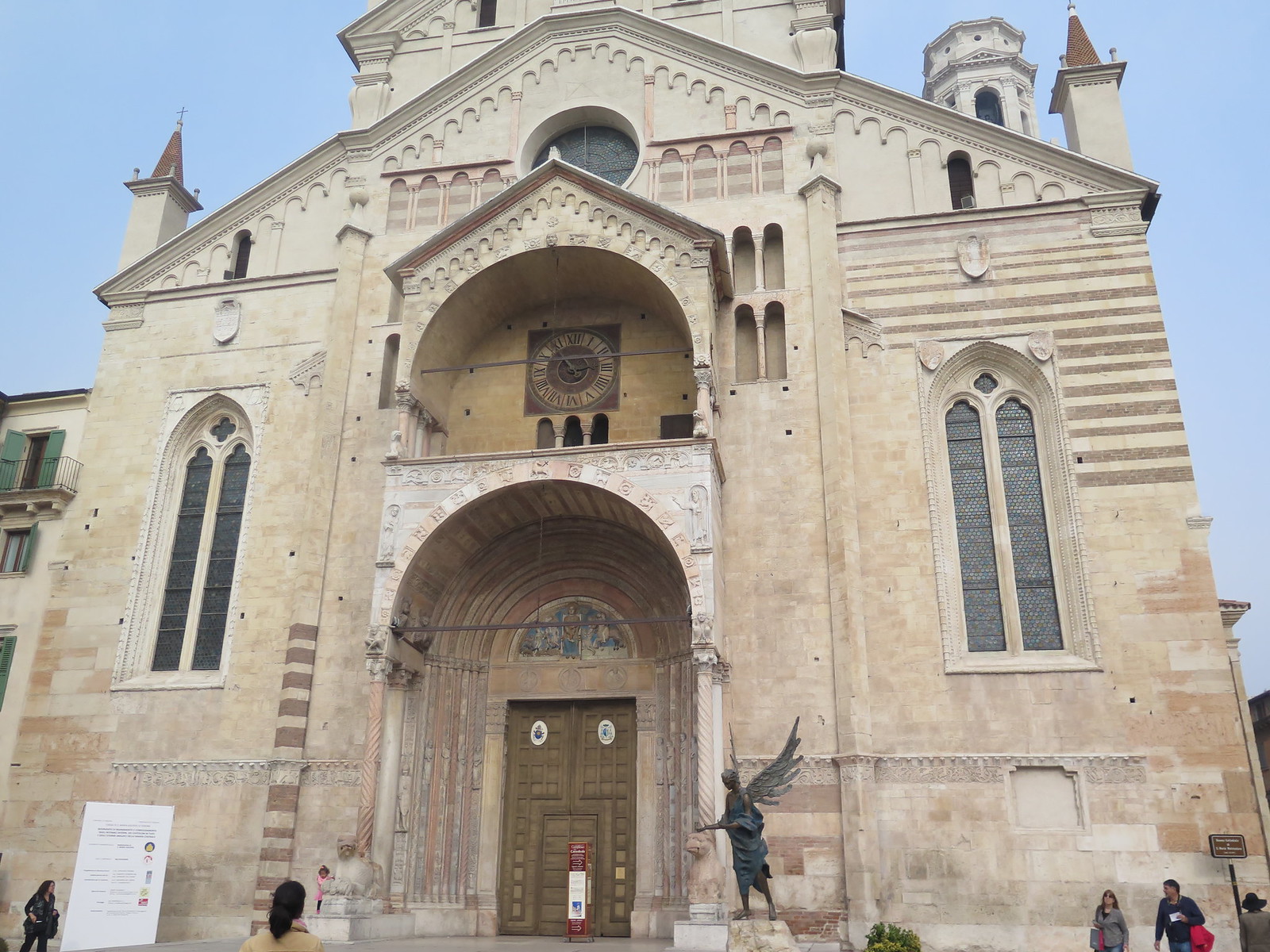 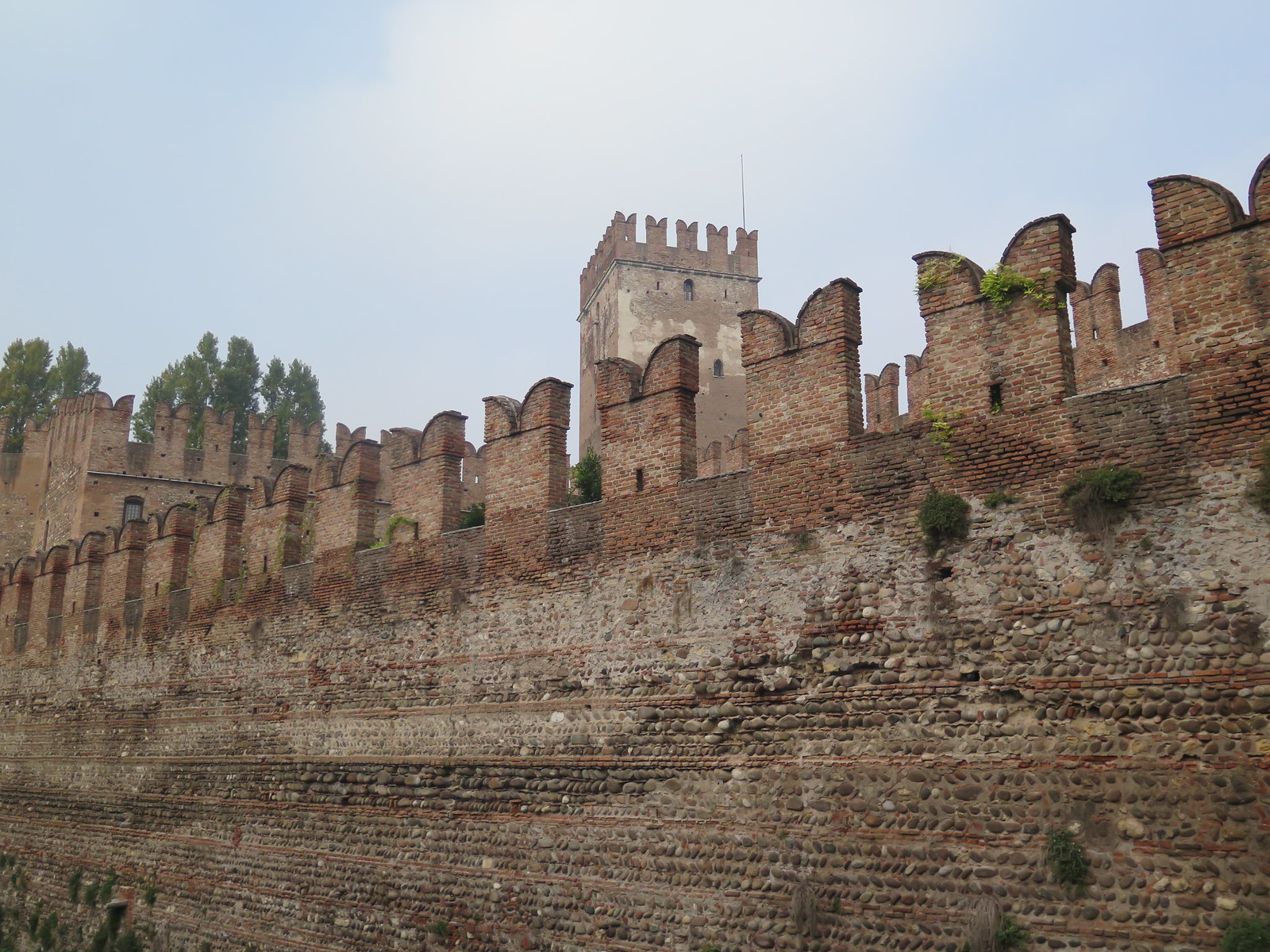 Our last stop was the castle on the southern edge of the old town. The Castelvecchio is part castle, part bridge, and all medieval. The name means, literally, old castle, and it was built by the same family that’s entombed in the gothic tombs – the Scaligers. 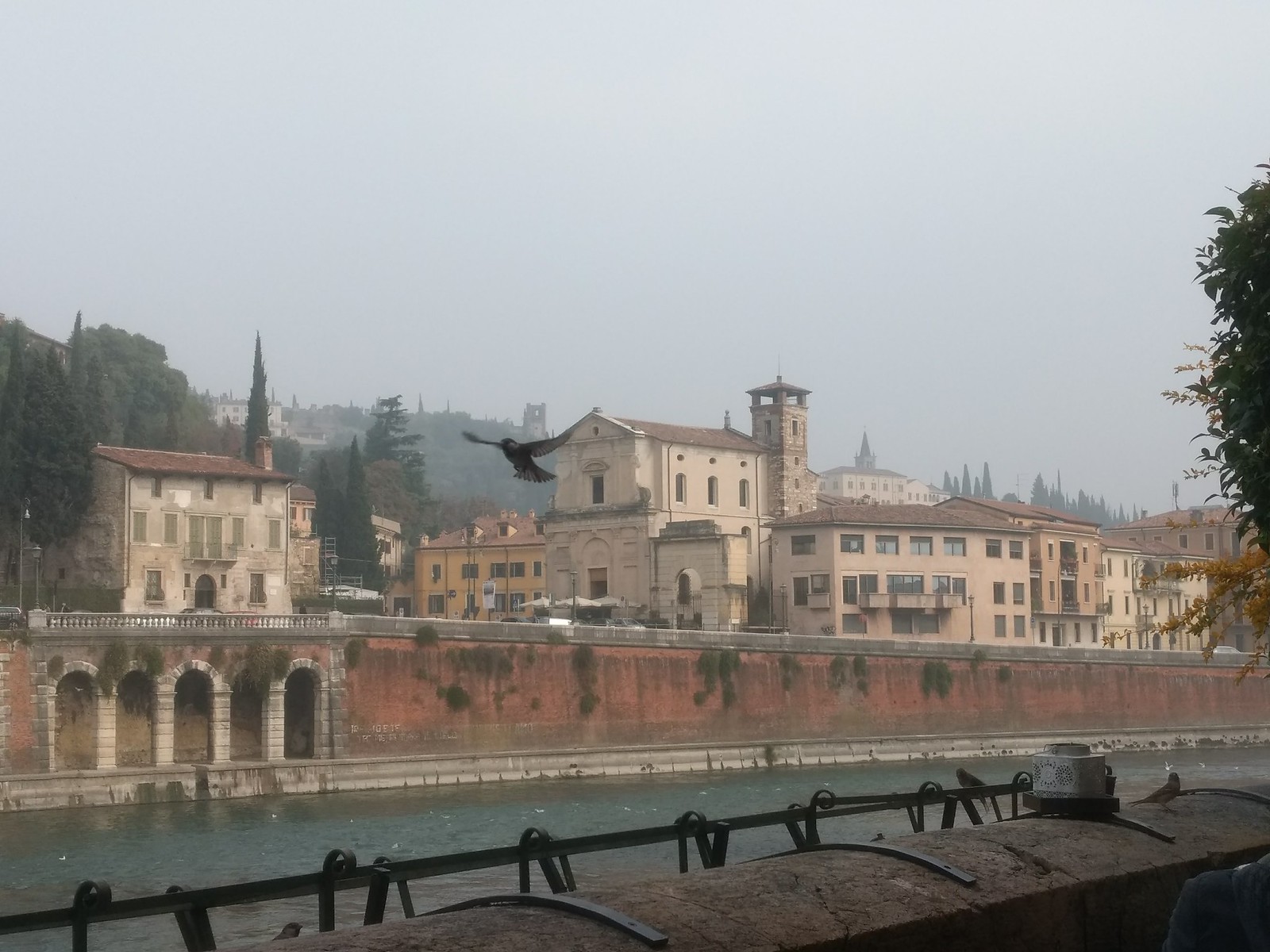 There’s no shortage of beautiful buildings in Verona. It’s easy to imagine it was an inspiration to painters of old, and it remains a great subject for sketching today. A day is well spent walking around and marveling at the construction. There’s even more to see, inside the various museums and churches in the city. Done with the city, we headed home by train. Between the frequent local buses and the rapid trains, Italy’s transportation system served us amazingly well once again.